On the face of it, Star Trek: Discovery isn’t offering much that’s new. We’ve had a darker, serialised Trek series with a black lead before (Star Trek: Deep Space Nine); we’ve had a female protagonist (Star Trek: Voyager); there’s already been a prequel series (Star Trek: Enterprise); and the reboot movies give you a look at Gene Roddenberry’s universe with cutting-edge visual effects…

But it’s still the first Trek TV series to air in 12 years, released into a very different world of home entertainment. Discovery is the flagship of streaming service CBS All Access, distributed globally by Netflix, with each episode reportedly costing just shy of $9m. That puts it in the top-end TV bracket of HBO’s Game of Thrones (which now costs $10m each week).

There was positive buzz when Discovery was announced, as many fans have been itching for Trek to return for weekly TV adventures focusing more on characters and sci-fi than the action-orientated movies allow for. And with acclaimed producer Bryan Fuller (Hannibal) leading the project, the future looked very exciting indeed. Unfortunately, Fuller left to concentrate on American Gods, rumours surfaced he wasn’t happy with how things were developing with the series, CBS postponed the release date, and early footage was widely criticised. Suddenly, Trekkers were concerned this new series was going to be a creative disaster. 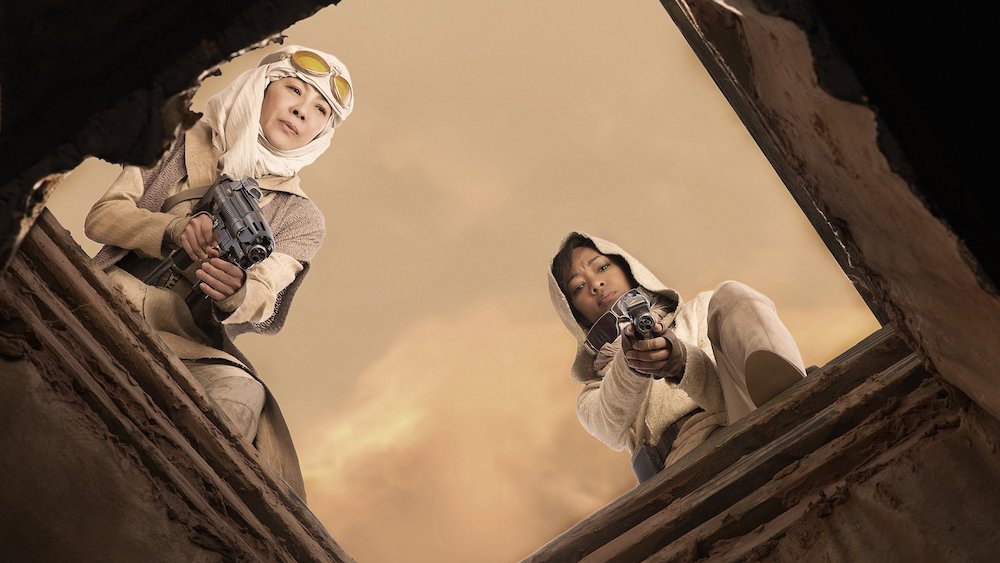 Star Trek: Discovery has now debuted with a two-part premiere, and despite the negative pre-publicity, I’m pleased to report its opening instalments are very promising. Of course, these are the episodes Fuller had the most involvement with as a writer, so there’s still a concern quality will dip in the coming weeks, but I have no reason to be negative right now.

How do you make a 51-year-old series like Star Trek feel fresh and different for contemporary audiences? The answer is a combination of things, as Discovery demonstrates. It takes stylistic cues from the J.J Abrams-produced movies (certainly in terms of the atmospheric lighting), with a dose of Ronald D. Moore’s Battlestar Galactica reboot (mainly with the tone of the action sequences in space), but it ensures there’s an emphasis on character and story over style and spectacle.

It also uses the breathing room afforded by TV, embracing plot serialisation and therefore pacing things very differently. I hope it’s not turning its back on telling standalone stories (the bread and butter of every Trek before now), but I appreciate a single story thread pulling everything together. Deep Space Nine hit a creative peak by likewise telling a serialised war story in-between unrelated adventures for the crew, so hopefully Discovery is following its example. 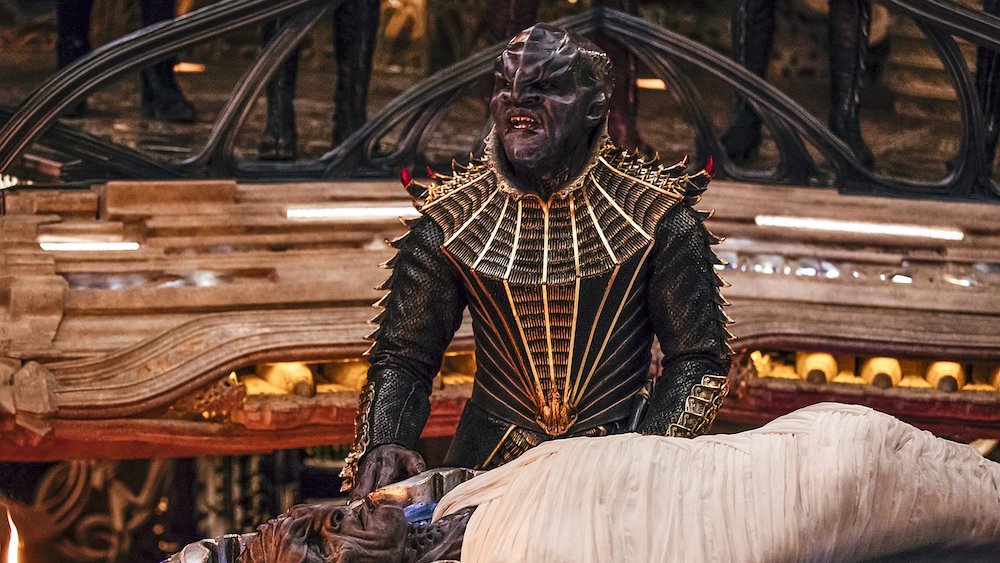 After 90-minutes, we haven’t been introduced to most of the regular characters, which was unexpected and very refreshing. You feel like you’re exploring this show even as a viewer, as nothing’s served up on a plate

“The Vulcan Hello” and “Battle at the Binary Stars” introduce us to Discovery’s protagonist, First Officer Michael Burnham (Sonequa Martin-Green), a human raised as a child by Vulcans after her parents were murdered by Klingons. Sh spent her youth being indoctrinated into the Vulcan culture by her adopted parent/mentor Sarek (James Frain), father of Spock, before beginning a Starfleet career aboard the U.S.S Shenzhou under Captain Phillipa Georgiou’s (Michelle Yeoh) command.

The story really begins seven years into Burnham’s career, where it’s now clear Georgiou has become a surrogate mother figure, tempering some of Sarek’s coldly logical tutelage. They share an easygoing chemistry in opening scenes on a desert planet, working to escape an approaching sandstorm, with Burnham exhibiting a pleasant air of Vulcan reasoning and reserve, with flashes of her humanity brought out in the camaraderie she shares with her friend.

The crux of these episodes revolved around the Shenzhou encountering a mysterious artefact on the edge of Federation space, hidden in an asteroid field near binary stars. Burnham investigates with a space walk (echoes of Spock’s exploration of V’Ger in Star Trek: The Motion Picture), only to discover the object’s of Klingon origin. At this point in the timeline (a decade before the U.S.S Enterprise’s five-year mission began), the Klingon Empire’s 24 houses are in disarray, and the Federation haven’t even set eyes on them in a century. However, ambitious warrior T’Kuvma (Chris Obi) hopes to unite his kind against the Federation by fulfilling an ancient prophecy… 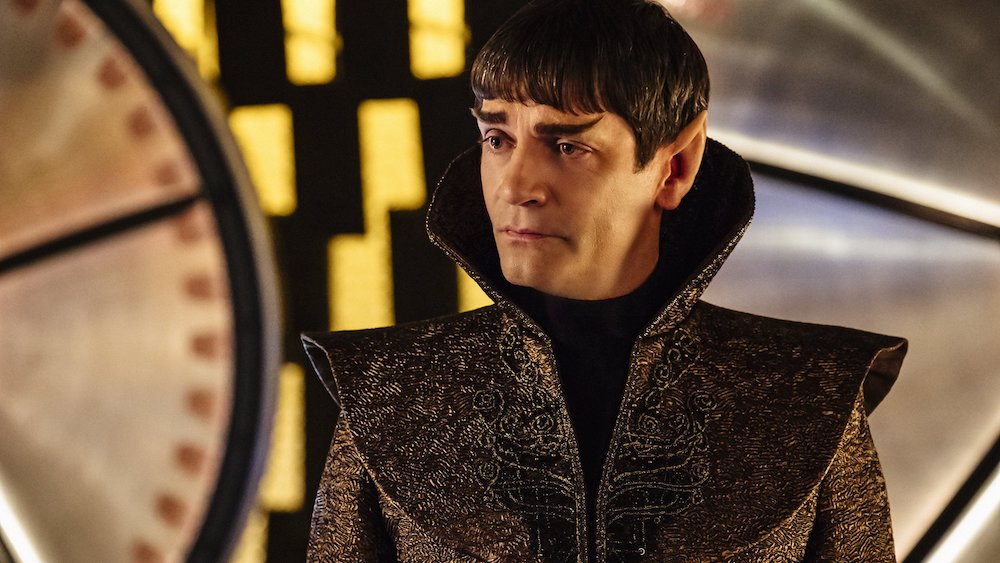 And yes, the Shenzhou unwittingly find themselves part of T’Kuvma’s plot to trigger a war we know lasts until Star Trek VI: The Undiscovered Country (1991). It’s obviously premature to make a judgement about Discovery, based on a feature-length premieres designed to get casual viewers hooked. There’s enough F/X wizardry to make Discovery feel like a movie that never got a theatrical release, with a large space battle that puts everything the previous TV shows created in the shade. It’s truly incredible the small-screen is now capable of visuals this complex and rich in quality.

The story is less about exploring the final frontier, and it has no big “sci-fi idea” to resolve, but that’s not a negative. It’s a creative decision. Some of the best Trek tales involved scenarios much closer to home, like Star Trek VI, or focused on smaller personal stakes, like Star Trek II: The Wrath of Khan (1982). Discovery delivers a fun little mystery, a dramatic origin to a famous war, and plenty of reasons to believe these characters are worth following. 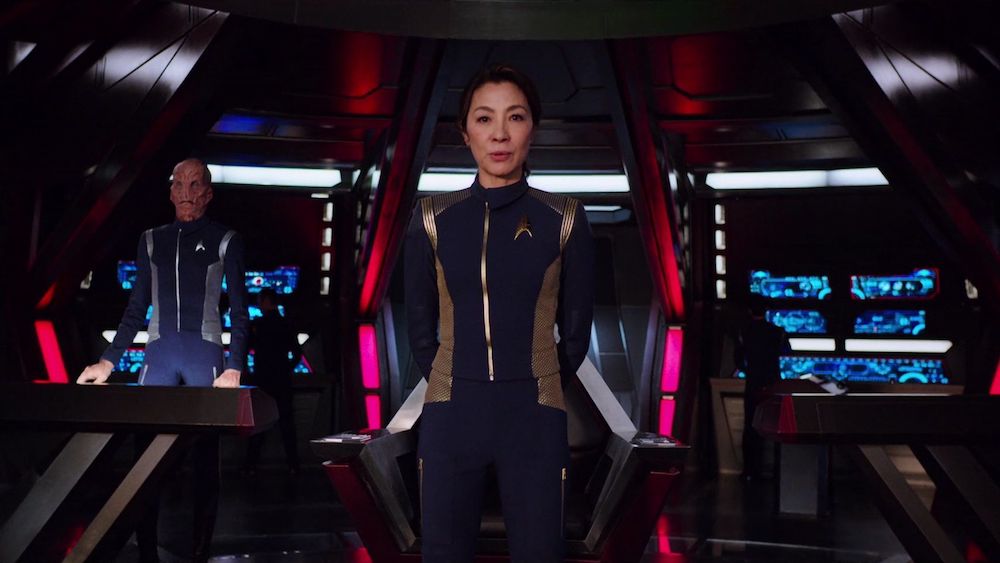 I’ve seen a lot of Star Trek over the years, having grown up on it in the ’80s and ’90s, so it was a relief to see moments and relationships offering something new. Sonequa Martin-Green is the clear standout, playing a very ’emotionally logical’ character, who’ll even commit mutiny to ensure a crew’s survival. I love the idea of a human whose formative years have been spent living amongst an alien culture, too. We always see the reverse of that in sci-fi, with an alien adjusting to human society (Spock, Data, Odo), so it’s an intriguing new angle.

I’m not sure the involvement of Sarek was necessary, as it’s hard to believe Spock never mentioned having an adopted human sister before, but James Frain is a perfect choice to play a young Mark Lenard. Michelle Yeoh (Crouching Tiger, Hidden Dragon: Spear of Destiny) is also very good as Georgiou, especially in her interactions with “number one” Burnham, as the actresses have a compelling mother-daughter vibe. Just seeing two women lead a story like this is unusual and cool, as strange as that sounds.

The design of the Klingons has been updated, along the lines of their revamp in Star Trek Into Darkness (2012). I’m sure this is causing a meltdown if you’re a nerd obsessed with continuity. Let it go, please. We all know it’s weird a prequel like Discovery has technology that’s more futuristic than anything we saw in Star Trek: The Next Generation, which takes place a century later, but it’s just aesthetics for the most part. 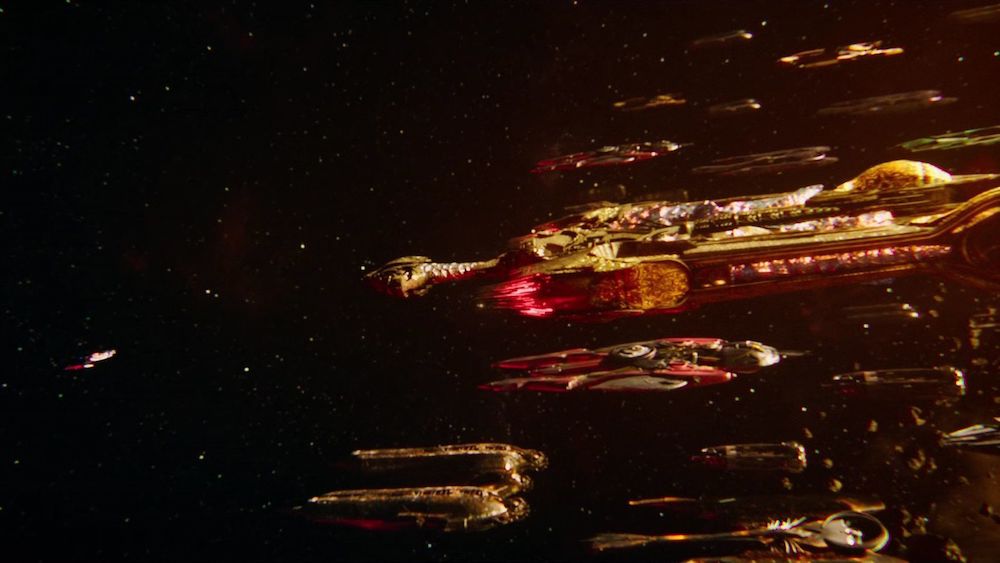 Only the fact interstellar communication is achieved using holograms stood out as inexplicable to me, but it’s such an improvement on viewscreens I can’t complain. It would be ridiculous to insist Discovery intentionally make itself look as outdated as the Original Series, and fans strangely never criticise how Kirk’s crew underwent three design overhauls between the ’60s TV show, the 1979 movie, and its five sequels.

What matters is the Klingons look better than ever; recognisable as the famous warmongering villains with bumpy foreheads, but with an overhaul in terms of their spiked uniforms and lavish jewellery and garments. They feel more “alien” than ever before, perhaps even insect-like in some ways, and these episodes gave us a fascinating insight into their culture, mythology, and bellicosity. 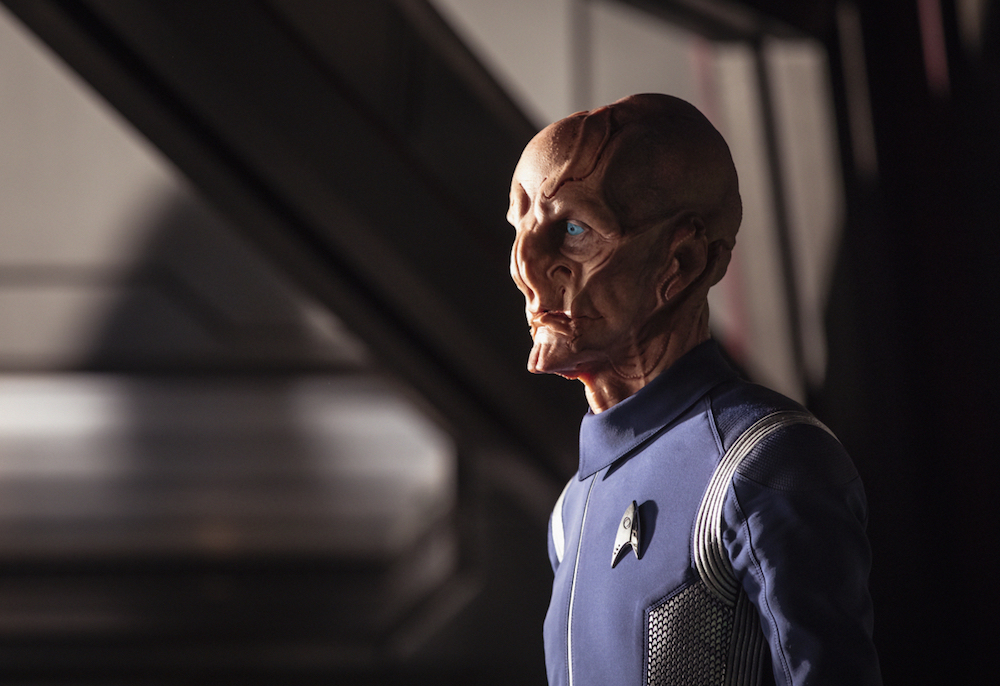 Trek has always worked as an allegory for our times, and it seems the Klingons now represent Islamic fundamentalists and xenophobes. T’Kuvma stirs dangerous passions in his fellow Klingons by uniting them behind the promise of a future filled with battle, and he even gives a speech about hating the Federation for its interracial nature. He claims their enemy detest the “purity” of Klingons, and ridicules the human claim “we come in peace” for its perceived contradictions in how they behave.

Given the world’s racial divisions, especially in the US right now, and the threat posed by far-right followers to democracy, this latest incarnation of Star Trek has again managed to tap into some hot issues. I just hope its message of inclusion and tolerance gets out there, changing hearts and minds in some small way, considering it’s not broadcast on a mainstream network in most territories.

Ironically, there’s still a lot to discover about Discovery.

The titular ship hasn’t made an appearance yet, many of the regular cast didn’t appear in these episodes, it’s uncertain if we’ll follow this one storyline all through the season, and subsequent episodes will perhaps feel different without the guiding hand of Bryan Fuller steering the ship. But, nitpicks aside, this was a very confident first step that made Star Trek feel more interesting and vital than it has in years.

The possibilities are endless.

THE MANDALORIAN – Season One