After the surreal absurdities of “Part 3”, “Part 4” of Twin Peaks: The Return is much more accessible. It’s not without its bizarre set-pieces, but as a narrative it’s less informed by ambiguous symbolism and abstraction and is more a return to Twin Peaks’ domestic environment and its own undercurrent of waking dreams and dark melodrama. It does feel like a continuation of the process Lynch underwent with Twin Peaks: Fire Walks With Me (1992) where, as Justus Nieldand noted in his book on Lynch, he wanted to “estrange Twin Peaks from itself.”

Coop (Kyle Maclachlan), still in the guise of Dougie, takes his winnings home. However, this is not the spiritual home of Dale Cooper among the Douglas firs and the owls of Twin Peaks. Even when the Casino offers him “a home away from home” to go with his winnings, Coop yearns only for a home he struggles to identify. Lynch nods back to the closed circuit surveillance of Fire Walk With Me in this scene as Coop looks up at the spy camera in the ceiling and is told by the Casino’s boss that “we’re watching you.” It’s a technological uncanniness that refers back to the film’s strange scene of missing agent Phillip Jeffries’ re-appearance at the FBI’s headquarters and how television and video images partly inform the dream spaces of Twin Peaks. Incidentally, Phillip Jeffries has already been referred to by Mr. C and will be mentioned again in “Part 4”. 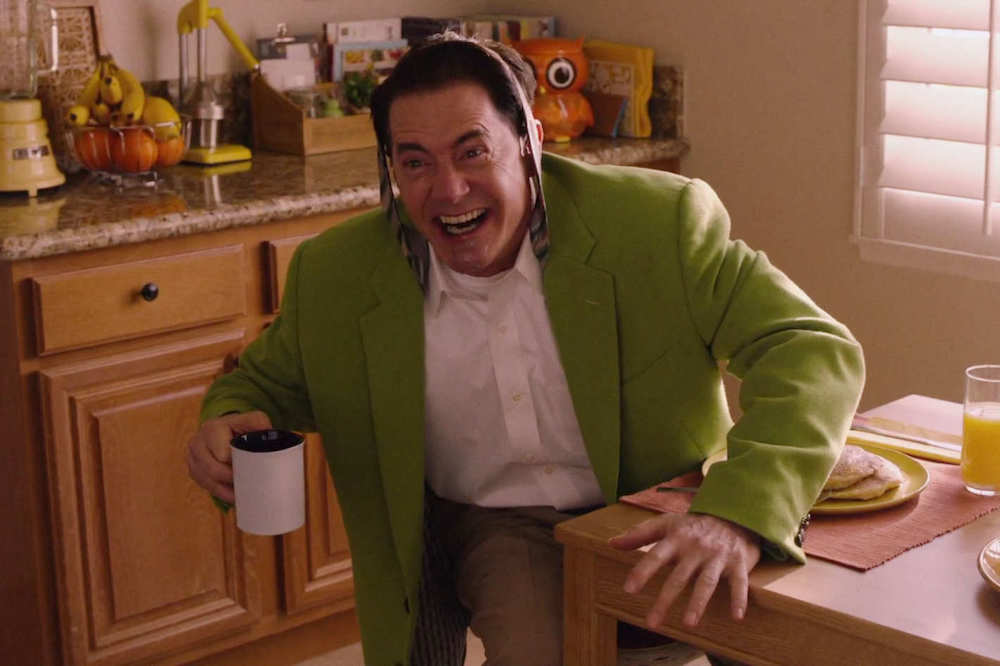 However, Coop’s chauffeured back to Dougie’s house, the one with the creepy red door, behind which lurks his perplexed wife Janey-E (Naomi Watts) and a highly bemused son, the oddly named birthday boy Sonny Jim Jones (Pierce Gagnon). Doors are metaphors in Lynch’s work. They invite otherworldly demonic forces into safe, domestic spaces, and Lynch has said in interviews that “there is a mysterious door right at the balance point between extreme evil and violence, and goodness and peace.” Sonny Jim’s parents were perhaps unaware they had named their offspring after a cult leader, the orchestrator of 1978’s mass suicide in Jonestown, Guyana.

Gordon Cole (David Lynch) meets with another familiar face. Special Agent Denise Bryson, now FBI Chief of Staff, the trans character played by David Duchovny, broke the mould back in the 1990s when transgender representation in film and TV simply reduced such characters to psychotic killers or the target of cruel humour. Even at the time Twin Peaks itself went for misplaced humour at the expense of Bryson but there was a humanity and compassion to the portrayal that was very rare to see then.

It’s good to see that Denise has risen in the ranks and has become Chief of Staff. Cole certainly validates her as “a great agent” despite the traumas of transitioning and dealing with prejudiced colleagues while undercover at the DEA. Denise isn’t backward in coming forward about Cole’s own attitude to women and cautions him about taking Tammy Preston with him to South Dakota. It’s a tender and flirtatious scene, but it’s too self-consciously played by Lynch and Duchovny and still carries some misplaced humour of old. 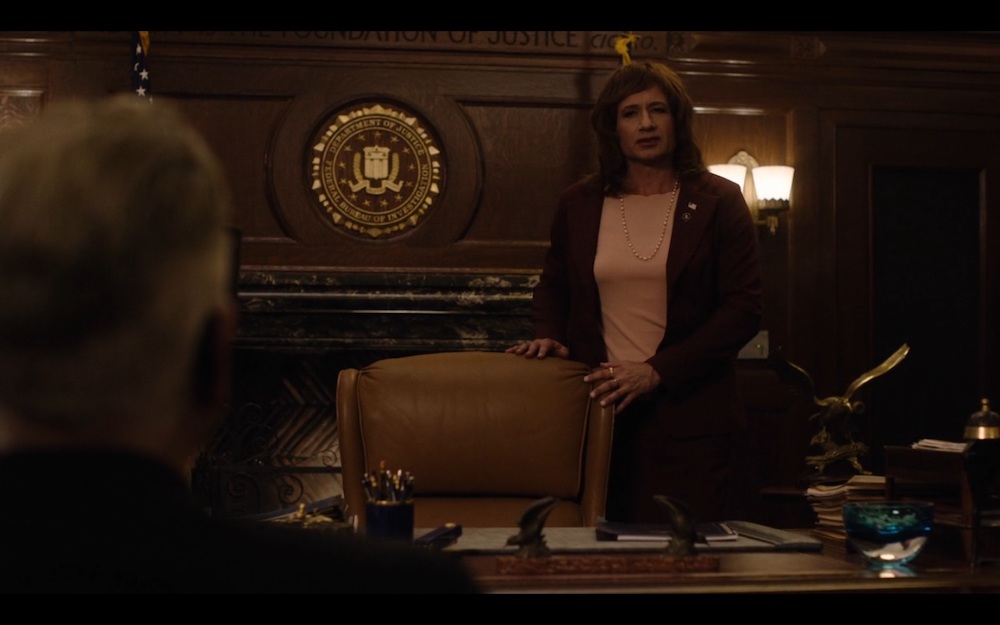 Back in the Twin Peaks Sheriff’s Department, in contrast Lucy (Kimmy Robertson) seems to be a woman out of time, struggling with the modern world’s reliance on pre-programmed thermostats and the flexibility of mobile phones. She just can’t understand how she can talk to Sheriff Frank Truman (Robert Forster, playing the brother of Michael Ontkean’s Harry Truman from the original series, who was actually the first choice for Harry) while he’s out fishing and the next minute have him standing in front of her. As her husband Andy (Harry Goaz) explains: “that means they’re mobile, Punky.”

Even their biker son Wally (Michael Cera) is living out a retro-fantasy as a Marlon Brando cos-player. When Wally turns up at the Sheriff’s office, we’re firmly in the realm of those oddball sub-plots that the second season of Twin Peaks often spent much of its time exploring and, in the opinion of many, much to its detriment. Cera is hilarious with his interpretation of Brando from The Wild One, and yet the scene felt a little like it had been parachuted in to explain Ontkean’s absence. However, his parting words “my Dharma is the road, your Dharma…” (indicating the forest with his open arms) does turn the encounter into an existentialist reflection on the town of Twin Peaks and the highways and byways through the Douglas firs. 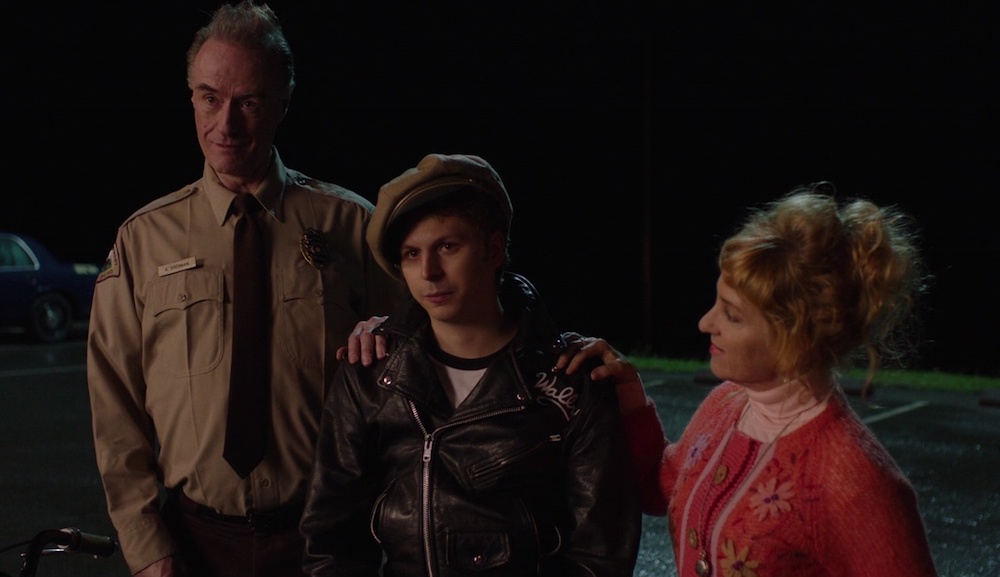 The Sheriff’s Department has moved on; its operations room full of surveillance and communications equipment. Yet, the crimes reported are much the same, domestic abuse, drug and alcohol related felons. A schoolboy’s OD takes Frank to Bobby Briggs (Dana Ashbrook), now a Deputy in the Department, and whose history with the Laura Palmer murder and its related drug crimes and killings he was closely involved with.

It’s good to see Bobby has turned his life around, and Lynch takes an opportunity to release some of that signature melodrama when Bobby goes to the conference room and sees Laura’s picture among the files and evidence Frank and his team are sifting through. Dana Ashbrook is wonderfully over the top and perfectly captures the mode of extrapolating the excesses of the melodramatic in the original Twin Peaks, when it was “crossing genre and media and linking televised soaps, the post war film noir, the police procedural, the suspense thriller and the family melodrama.” Compare Bobby’s reaction to that of the rather cynical, skeptical Deputy Chad Broxford (John Pirruccello), who clearly has no time for the predictions of an old lady and her log, and you get a sense that the events surrounding Laura’s death and Coop’s disappearance keep stirring up emotions for those that were left behind. It’s underscored by that tender moment where Andy and Lucy, witnessing Bobby’s outburst, quietly hold hands.

At precisely the moment Bobby sees Laura’s image, Angelo Badalamenti’s theme surges on the soundtrack. A signal that painful memories are bubbling to the surface, including Bobby’s recollection that Coop was the last one to see his father Major Briggs alive, this is a rare reflection back to the fondly recalled sensory world of Twin Peaks in a series that has so far been dominated by huge stretches of silence or an unnerving industrial soundscape of buzzing, thumping, rumbling, and scratching.

Back in Dougie’s house, Coop receives a message from Mike (Al Strobel) in the Black Lodge. He’s told that Mr. C has indeed tricked him and has not returned to the Lodge. One of them must die. It’s underscored by that uncanny shot of Dougie looking into the bathroom mirror, an exact parallel to the shot right at the end of he last episode of Twin Peaks in 1991 where evil Coop sees his own reflection in a cracked mirror and it’s BOB staring back at him. 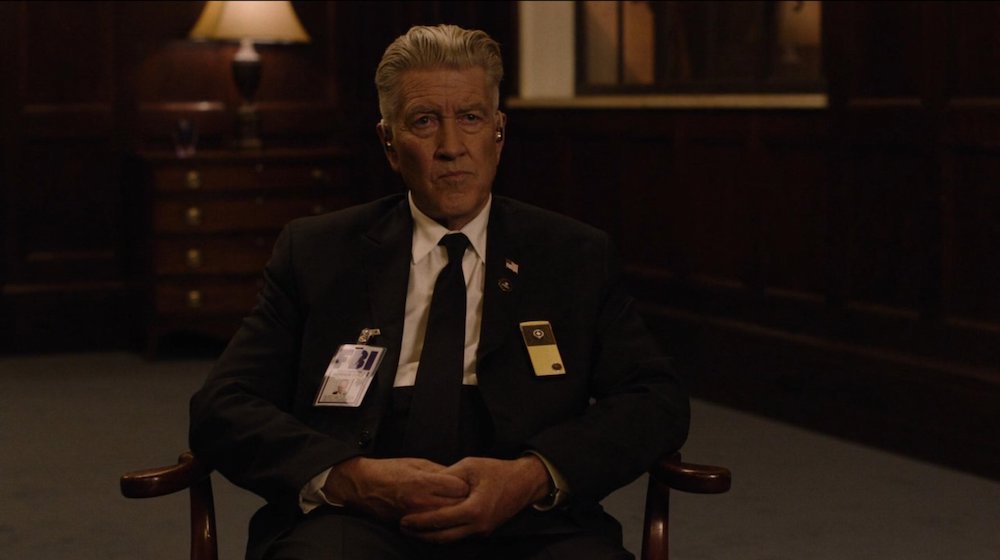 Dougie’s wife seems very accepting of the fact that not only has her husband slightly changed his appearance and lost a lot of weight, but he’s also become a quiet, self-absorbed child-man whom she’s content to fetch and carry for. The breakthrough here is the thumbs up that Sonny Jim gives Coop which leads to the glorious scene at breakfast. Thumbs up, pancakes with syrup, and coffee soundtracked to Dave Brubeck’s “Take Five” are a serenade to lost innocence and the Cooper that still dwells within Dougie’s faux identity. Amusing as it is that coffee, such a sacred beverage to Coop, seems to trigger ‘something’ in Dougie, it’s just slightly frustrating that the choice was made to keeping on drawing out the story of Coop’s return to his spiritual home of Twin Peaks.

Talking of thumbs up, we do get that concluding and unsettling scene in South Dakota when Gordon and Albert (Miguel Ferrer) arrive to interview Mr. C. Clearly, Gordon is not convinced by this friendly gesture from Mr. C when they go and talk to him. Mr. C claims to have been working undercover with Phillip Jeffries and was on his way to present his findings to Gordon. He is insistent about being debriefed by Gordon and there is a moment where they stare at each other, locked in some hypnotic spell.

“I’ve never really left home Gordon,” claims Mr. C, thumb held aloft as the screen comes down on his interrogation. As Albert points out in a private tête-à-tête with Gordon, he was responsible for linking the long missing Phillip Jeffries (played by the late David Bowie in Fire Walk With Me, who, according to Harry Goaz, was supposed to have reprised his role) with Cooper, that then led to the death of “our man in Columbia.” Gordon and Albert have their grave doubts about Mr. C and Gordon confirms, “Albert, I hate to admit this but I don’t understand this situation at all.” That’s Gordon speaking, but maybe that’s also Lynch having a bit of fun with his confused audience. Gordon then claims that to confirm they have found the real Cooper will require the presence of a certain person. We wonder who that could be when Albert acknowledges, “I know where she drinks” before the episode cuts back to the series’ regular closing spot at the Bang Bang Bar.