While not as distasteful as “Babylon”, the finale of The X-Files’ so-called ‘event series’ was a preposterous mess that bit off more than it could chew. Maybe if this had been a two-hour film (possibly as intended, as Chris Carter once admitted writing a third movie on spec), it perhaps would have had the necessary time and budget to do justice to some of its ideas, although brevity and lack of money wasn’t the main problem.

To start with the positives: I liked how “My Struggle II” bookended the season with a story told mostly from Scully’s (Gillian Anderson) perspective, opening with a précis of her X-Files history that mirrored the cold open narrative from Mulder (David Duchovny) in “My Struggle”. It’s just a shame the story proceeded to keep Mulder and Scully separated until the very last scene, which only made me think Carter’s forgotten what people liked about his show; the lead character’s friendship, camaraderie, and chemistry. Keeping them apart does nobody any favours. 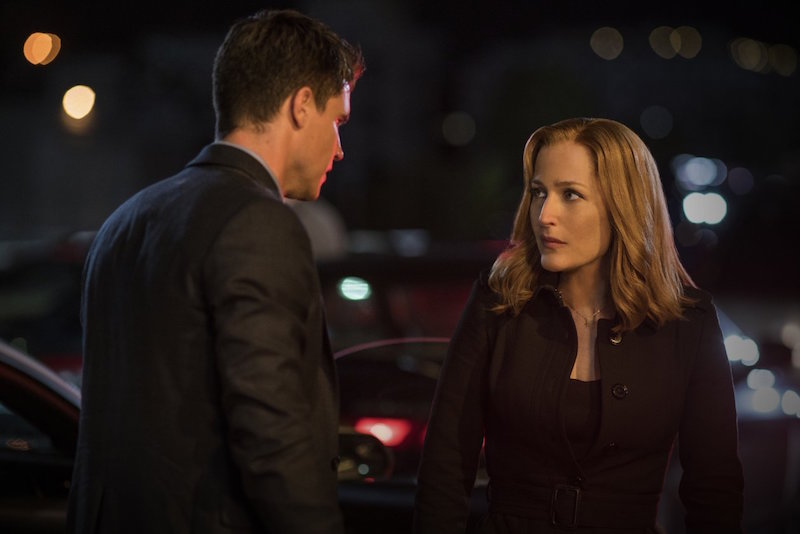 I didn’t set out to destroy the world, Mulder. People did.—Cigarette Smoking Man

I also appreciated that Agent Miller (Robbie Amell) and Agent Einstein (Lauren Ambrose) were utilised in the finale, because it suggests they weren’t just an unfunny adornment last week, and there’s a desire to weave them into the show’s mythology. Contrastingly, A.D Skinner (Mitch Pileggi) barely appeared in this episode, or indeed most of the previous five hours, so I’m astonished he got third billing on the opening titles. Good work, Pileggi’s agent!

The return of the smug Cigarette Smoking Man (William B. Davis) was also weird fun—with a flashback to explain how he miraculously survived being blown up during the TV show’s finale, and how Agent Monica Reyes (Annabeth Gish) has been his reluctant nursemaid all these years (she being the owner of those anonymous fingers sticking cigarettes into this tracheotomy tube). It got slightly ridiculous when CSM pointlessly revealed to Mulder that part of his face is now a grotesque crater, hidden behind a flesh-like mask, and his nose is missing, but I can forgive the temptation to turn CSM into a more literal monster. It was just incredibly weird how he exposed his disfigurement to elicit an easy shiver. 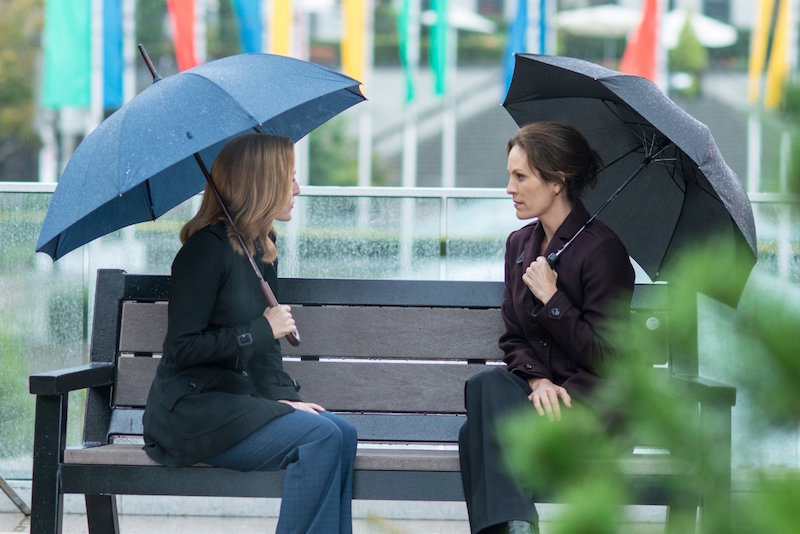 Every man has his weakness. Mine was just cigarettes.—Cigarette Smoking Man

Unfortunately, everything else about “My Struggle II’ was a dismal failure; a parade of dumb science shoehorned into a very illogical, rushed doomsday situation. Having only just discovered that the show’s divisive conspiracy is suddenly less to do with extra-terrestrials waiting to colonise the Earth, than an evil cabal intended to subjugate the population using reverse-engineered alien tech, “My Struggle II” threw us into a bizarre end-of-the-world countdown. It turns out that everyone on the planet (well, certainly the U.S) have been infected with a Spartan virus that’s switched off their immune systems (meaning trivial sicknesses have become life-threatening), and only those with alien DNA have been selected to inherit the depopulated planet. I wonder if Chris Carter saw Channel 4’s Utopia series, which had a very similar concept at the root of its own mystery—although that series wisely spent a lot of time gently delivering the information and making it feel frighteningly realistic.

To be fair, I don’t think the idea behind “My Struggle II” itself was a huge problem. It’s no more or less crazy than the idea of the U.S government being complicit in helping aliens colonise the world, is it? It just didn’t work having this idea get tangled up in a mere 43-minutes of TV, because I just didn’t understand the scope of what was happening, or how real people were reacting to events. It felt like we were supposed to believe that the majority of people on the planet were suddenly dying of a mystery virus, only being reported on accurately by conspiracy theorist Tad O’Malley (Joel McHale), but none of that really worked. Why would anyone believe what O’Malley was saying? He looked insane. And if most people weren’t even watching his show (it’s just a stupid YouTube channel, right?), what were they thinking instead? How on earth did Scully think she could create a cure, using her alien DNA, for the entire country/planet? Most people looked hours from death, including Mulder by the end. 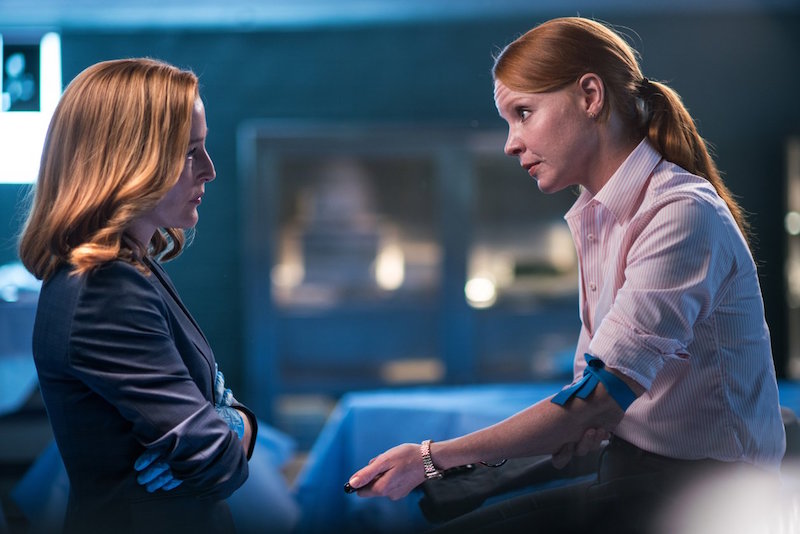 And suddenly it dawns on Scully that the only way to cure Mulder is to harvest stem cells from their son, William, who’s the only plot strand that’s been consistently mentioned through every prior episode and yet didn’t factor into the finale. Bravely, considering it was possible The X-Files’ ratings could have been awful for Fox, Carter chose to end the hour on a doozy of a cliffhanger—as a giant alien spaceship descended from the sky in full view of hundreds of people, possibly to abduct Scully or Mulder. Luckily, this series has been a big enough hit for Fox to bring it back, at some point—which seems to be something the cast aren’t against. I mean, they must’ve read the finale’s script and knew there’s an expectation for “My Struggle III”.

So what next? Maybe Chris Carter imagines these six episodes were enough to renew interest in pursuing a big-budget film, so the story could continue on a much larger canvas? I just don’t see the marketability of a movie concluding a TV show’s storyline, however. Another six-episode run of the show is far more likely, but who knows when the stars will align for that. I’m sure Fox hope to make The X-Files an annual post-Christmas event, with everyone reconvening each summer to film more, and that seems theoretically possible. I just wonder if having to wait a year, at least, to answer this episode’s cliffhanger was a good move. Audiences are used to similar gaps between cliffhangers (with Sherlock for example), but there’s nothing worse than an unexpected cliffhanger of the type dished out here. A self-contained X-Files miniseries was a fun idea, but I won’t be half as excited by its return—considering half of these six episodes weren’t that good (“My Struggle”, “Babylon”, “My Struggle II”), two were average at best (“Founder’s Mutation”, “Home Again”), and there was only one truly great hour (“Mulder & Scully Meet the Were-Monster”).

The ratings may have exceeded everyone’s expectations, but the novelty of seeing Mulder and Scully in the modern age is over (and proven to be a very mixed blessing), so I wonder if the desire for more is really there from casual viewers.