Track 29 is a quirky film by Nicolas Roeg (Don’t Look Now) with tense, vivid imagery and dark suburban humour evoking the work of David Lynch. Upon release in 1988, the late Roger Ebert described it as “unlikeable—perhaps deliberately so. But that doesn’t make it a bad film… and it probably makes it a more interesting one.”

It was produced by George Harrison’s Handmade Films (a company the former Beatle founded to bankroll 1979’s Monty Python’s Life of Brian), boasts a script written by Dennis Potter (Pennies from Heaven), and stars a young Gary Oldman. Yet despite this merging of classic ‘outsider’ British talent, it was a huge failure at the box office, although it won film festival plaudits and, 30 years later, remains as challenging as ever.

The movie charts the crisis of overwrought housewife Linda (Theresa Russell), who’s unhappily married to Dr Henry Henry (Christopher Lloyd) because he’s distracted by an obsession for miniature trains! Following a chance encounter with a British hitchhiker called Martin (Oldman), who’s searching for his birth mother, Linda descends into a fantasy which provides the catalyst to examine dark secrets from her past and change her life.

Dennis Potter was best known at the time for writing Pennies from Heaven (1981) and The Singing Detective (1987). He adapted Track 29 from an existing screenplay called Schmoedipus, originally a BBC Play for Today in 1974 starring a young Tim Curry, but shifted the location to the US. It still retains a British feel thanks to Oldman’s presence.

In a later interview, Potter revealed he was interested in writing about “how a bad act done years before will fester… and have its own yeast”. He explained he had every sympathy for how badly women are often treated by men (his later TV series Black Eyes also examined this theme), so he wanted to play with the Oedipus myth as a way to explore its dynamic forces from a female’s point of view. Above all, he wanted Track 29 to offer hope and show a positive resolution to Linda’s plight. 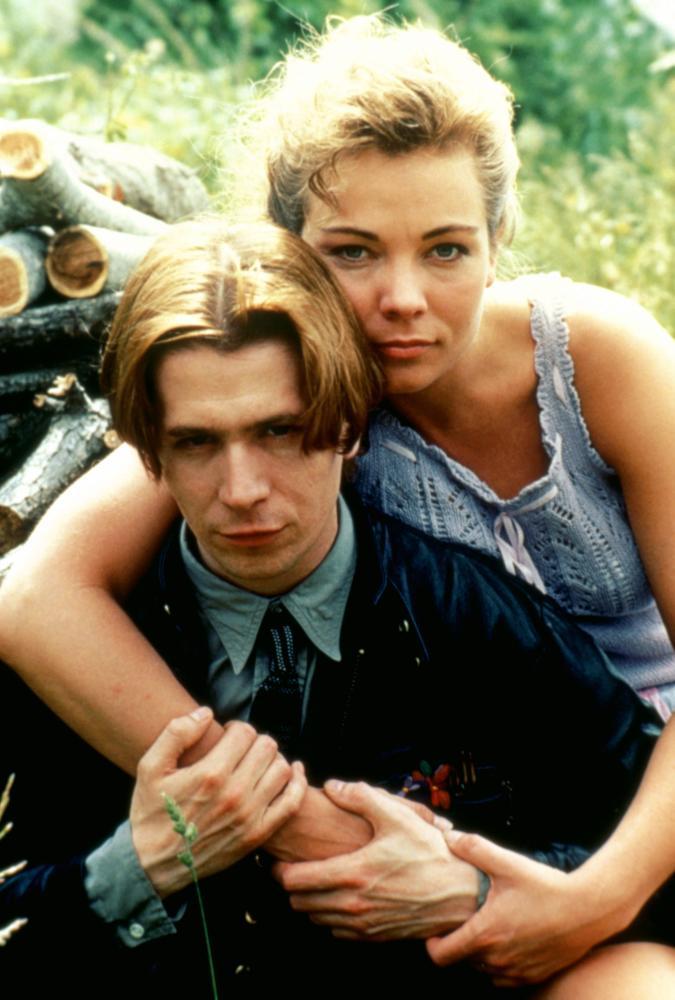 Roeg had already directed many classics, including Don’t Look Now (1972), The Man Who Fell to Earth (1976), Bad Timing (1980), Eureka (1983), and Insignificance (1985). Themes from those earlier projects echo or are reversed in Track 29, which revolves around gaining a forsaken child, which subverts Don’t Look Now’s story about the tragic loss of a child. The taboo-ridden erotic themes are treated with more tenderness in Track 29 than the tempestuous Bad Timing, while Oldman’s yearning for a lost childhood carries the same poetic melancholy as David Bowie’s homesick alien Thomas Jerome Newton in The Man Who Fell to Earth. Fantasy mingles with reality in a dreamlike and emotional way, and Track 29 has the same retro feel to Insignificance, in part thanks to Roeg’s re-hiring of cinematographer Alex Thomson (Excalibur), who’d met Roeg on Eureka.

In particular, the set-piece involving a miniature train track explosion is stunning and intense. Roeg later commented how “the crew didn’t want the railway broken—they couldn’t bear to watch”, although he uses the magic of film to reverse the process and restore the track at one point—much like his reversal of the devastation of a nuclear bomb at the end of Insignificance.

Potter and Roeg shared a child-like view of the movie. Roeg stated in a later interview with John Stezaker, “we are all private people. We’re all on our own. When people say, ‘someone has seen something that isn’t there,’ it’s absolutely true. It can’t get more pure than that. [But] the atmosphere I wanted to get across is hope.”

Roeg’s own wife Theresa Russell plays Linda, bored spouse of a doctor more interested in locomotives toys and kinky spankings from his nurse mistress (Sandra Bernhard) than in satisfying his wife. The Doctor-Nurse affair is entertaining black humour; comically odd assignations and Mel Brooks-style quibbling over grammar punctuate their commitment.

The big house, swimming pool, and suburban housewife life of leisure doesn’t quell Linda’s desire for a child to give meaning to her life. And so her dark secret bubbles to the surface with the appearance of Martin, who claims to be the grownup baby she gave up for adoption as a teenager. 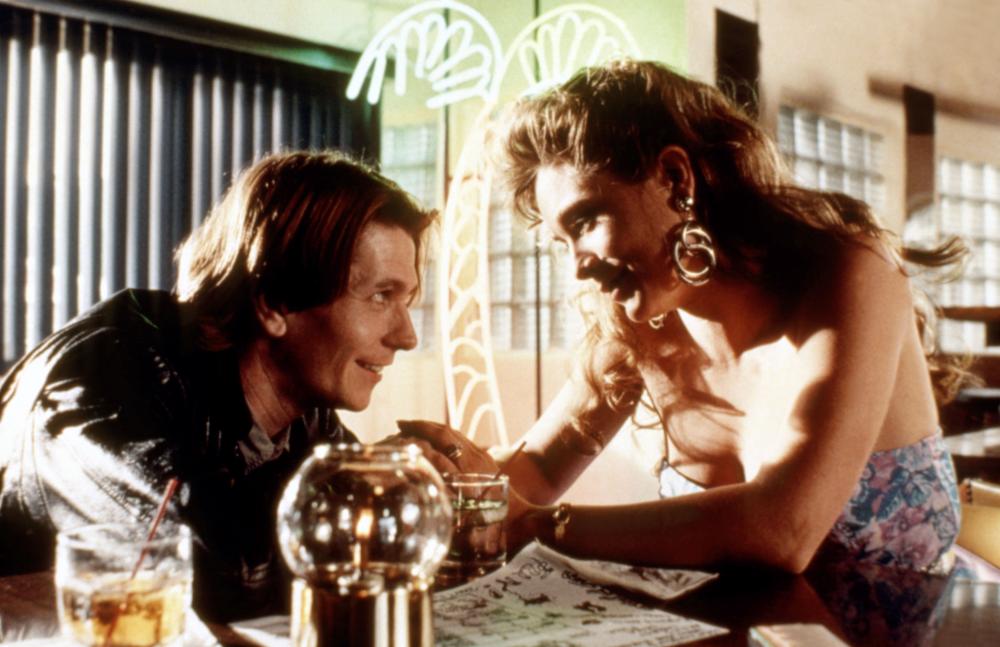 Russell was known for her acclaimed role as a chaotic lover in Bad Timing, before marrying Roeg in 1982 and appeared in his films Eureka and Insignificance, where she played Marilyn Monroe. Later interviewed about Track 29, the actress described the challenge of wanting to surprise her director-husband with her performance and make Potter’s stylistic dialogue more natural with her southern American accent. She’s a brave performer; beautiful but not afraid to look unattractive onscreen to better inhabit a character. We end up having great sympathy for Linda’s struggle thanks to hos Russell plays the part.

This movie contains a great performance by Gary Oldman at the start of his Hollywood career. Following his roles as Sid Vicious in Sid and Nancy (1986) and Joe Orton in Prick Up Your Ears (1987), this is an equally difficult role played with true passion. Oldman opens the movie standing on a bridge hitchhiking with a sign that just says ‘MOTHER’. John Lennon’s eponymous song plays over as Oldman waits dressed in a shirt, tie, leather jacket, and ridiculous cowboy hat. Nobody stops to pick him up and even a passing stray dog turns tail at the sight of him. (The moment recalls another track by Gordon Lightfoot, “10 Degrees and Getting Colder” which begins “he was standing by the highway with a sign that just said mother…”)

Oldman’s eventually picked up and taken to the outskirts of a small town by a trucker tired of his chat, because “nothing ever happens here, so they will be real glad of you.” At a diner, he meets Linda and her friend and something just clicks. Oldman continues to appear and disappear uncannily until reunited with Linda, claiming she’s his birth mother—then the tension really escalates. Martin’s behaviour swings from that of a charming but inept Englishman abroad to Johnny Rotten-style childish punk, before crossing into that of a seductive sexual predator. He keeps pace well with Theresa Russell and their mobile faces and myriad emotions are compulsive viewing…

Oldman shares a view this film was meant to be darkly humorous. In a later interview with The Guardian, he confirmed that Roeg had a black sense of humour but was “adorable… whatever you might think of Track 29, he was just a sweetheart to work with. I laughed my leg off making that film.”

Everybody in Track 29 tends to be annoying and frustrated and, as with most of Potter’s stories, it’s because they have trouble reaching the ‘know thyself’ stage of life. Linda behaves out like a teenager—frozen in her sexual self-discovery by what happened. At least Dr Henry knows what he likes, but it sure isn’t Linda; while Martin acts out seeking the American childhood he never had, adding sexual tension to his alternate adoration and baiting of Linda. Potter’s an expert at toying with taboos as the tension escalates until Linda reaches catharsis. 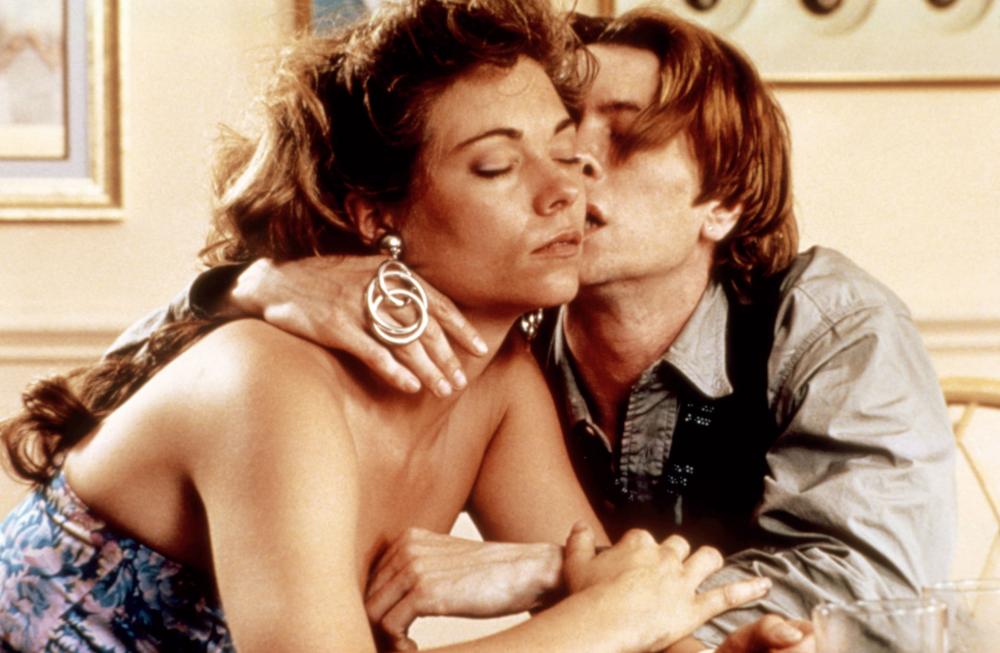 In one poignant scene, Martin plays the piano and serenades Linda (Oldman’s a competent musician, as seen when he played Beethoven in 1994’s Immortal Beloved). “Chattanooga Choo Choo” (the song from which the title Track 29 originates), is performed at Dr Henry’s keynote address at the Trainorama convention, and the uplifting “Young at Heart” plays over the end credits. Unlike The Singing Detective, Track 29′s not totally peppered with vintage songs, but the few chosen have similar significance.

The intercutting of TV scenes from Danger Mouse and Cape Fear (1962) also punctuate the action to add an underlying sense of distraction and emotional tension. The dark menace of Robert Mitchum stalking Polly Bergen is the background to Linda’s final confidence to her friend about her past…

The mingling of fantasy with reality (does Martin really exist?) and the disclosure of Linda’s teenage trauma also draws a parallel to David Lynch’s later movie Wild at Heart (1990)—Laura Dern and Theresa Russell are both shown wearing ridiculous hair curlers at one stage, and their dilemma has similarities. Linda has no ‘Wicked Witch of the West’ pursuing her, but rather a seductive and volatile prodigal son who threatens to destroy Dr Henry’s precious train set… and worse.

Track 29 is a film that seeks to address aspects of sexual abuse and society’s response to it, long before the #MeToo generation. And as Potter was an abuse survivor himself, the theme’s treated with vivid poeticism and humour to leaven its message. Potter intended a happy ending, a way of Linda finding her way through her past to a new beginning… but Roeg plays with us to the very end, as a red stain slowly spreads across a living room ceiling…

This is very much a film of the 1980s (check out the work-out gear worn by Linda and her best friend), but for all its faults it is an amusing, sympathetic, and imaginative exploration of a difficult subject. It’s also worth watching just to see Gary Oldman leap naked out of a closet wielding a knife!