The United States has a problem with guns. Most weeks, a cursory glance at the news will bring to light another avoidable murder or mass shooting in the Land of the Free. Particularly distressing is the way the epidemic has extended into schools. With high school shootings in America now a fairly regular occurrence in danger of being normalised, the world of film is busily reflecting this sad reality. Whether as drama (Elephant) or documentary (Bowling for Columbine), explorations of these shocking events are always sobering experiences. Keith Maitland’s new film Tower, however, takes a unique approach: part documentary, part drama, it’s a thrilling and heartbreaking animated movie that puts you right at the heart of one such terrifying tragedy.

Tower takes us back to the first mass school shooting in the United States—one that remained the deadliest on US soil until 2007’s Virginia Tech tragedy. On 1 August 1966, a young man climbed up to the observation deck of the clock tower at the University of Austin, Texas, armed with a variety of rifles and firearms. He proceeded to murder 17 unsuspecting people, and injure a further 31, from this high vantage point.

It’s important to note that Tower is not a particularly informative documentary, although it’s certainly enlightening. Maitland’s film offers no context for the shooting, little background on the characters or the situation, and, crucially, only mentions the shooter’s name once towards the end. That’s because Tower isn’t the shooter’s story; this film is emphatically not about him. This is an immersive documentary that places you right there in Austin, panicking on the hot concrete below the clock tower. It paints a vivid picture of the trauma the people on the ground went through on that scorching hot Texas afternoon.

And ‘painting a vivid picture’ is meant very literally. The movie is portrayed using rotoscope animation (filmed reenactments of events are painted over, frame by frame, lending the film a distinct visual style somewhere between a comic book and a stained glass window). Despite the heavy subject matter, Tower is gorgeous to look at; a bright, colourful, vivid piece of filmmaking. 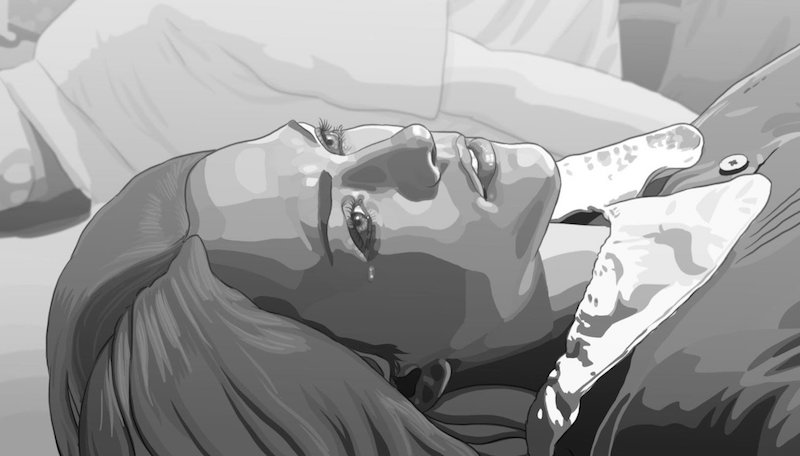 But the masterstroke with utilising this animation is, curiously, only to be found in the moment it falls away and the curtain drops. At a certain point, the film sends you crashing unexpectedly into real-life footage from the 1966 shooting. The film is structured in an extremely clever way, keeping the animated stylings up for so long that when the film suddenly thrusts you into real images from the day, the effect is a shock to the system. What was an animated film offering some distance, with actors providing voice-overs, suddenly becomes frighteningly real. The use of the earlier animation pays off brilliantly, amplifying what is already extremely powerful real-life footage a thousand fold. The impact is immense.

As Tower progresses, the talking heads also transition into the real thing. Suddenly, the animated accounts of the young characters (mostly students at the university) become the real life faces of those who survived that day; now aged and somber. Watching the gorgeous animation of the earlier sections unfold is affecting enough, but when Maitland lets you glance under that colourful veneer and into the real faces of those affected, the result is incredibly powerful.

The surviving victims are both brilliant and tragic. Some of them never even met each other after the events of that day (with no internet, tracking people down was difficult). Many of them never really had a chance to speak about or to deal with the events of that day, and it becomes apparent that Tower is as much an opportunity for catharsis for the victims as it is entertainment for us.

Maitland has mentioned that his initial idea was to cast professional actors that hail from Texas (Luke Wilson, Matthew McConaughey, et al) to help depict and recount the events of that day in the reconstructions, but working with non-professionals was definitely the right call. A voice as recognisable as McConaughey’s would only detract from the illusion that the non-professional actors and the animation creates. It would have spoiled the audience’s immersion into the awful events of that day. The non-professional voices allow you to believe and invest in the younger talking heads to the extent that you forget they aren’t the real people involved.

The brilliant thing about Tower is that it has universal appeal. The film is ostensibly about the University of Texas Massacre, but it’s really about every school shooting and act of terrorism that’s happened around the world. Much like those people we follow in Tower, every atrocity of this kind will have its own heroes and its own victims; its own media on the scene, and its own innocent people tragically caught in the crossfire. This is a film not about those that enact violence, but about the people that are affected by it, and what it’s like to find yourself caught in the midst of such a frightening situation.

As for Tower, the events of this particular day are exhilaratingly portrayed, beautiful to look at, and visceral to behold, but it’s in the pathos that comes from the survivors’ accounts and the impact of seeing them finally face what they went through that Maitland’s film will really stick with you. Tower isn’t just a documentary about one terrorist attack, it’s a film about the people caught in any and all of them. A unique, powerful, brilliant piece of cinema.