After Paul Thomas Anderson’s magnum opus Magnolia was released in 1999, the Boogie Nights director surprised his fan-base by declaring an intention to write and direct a 90-minute romantic comedy with Adam Sandler—an actor then best known for Happy Gilmore, The Wedding Singer, and The Waterboy. The result was 2002’s Punch-Drunk Love, which predictably wasn’t your typical rom-com fare, and remains one of Sandler’s few dramatic roles and arguably his creative peak. One wonders if the financial failure of Punch-Drunk Love (it narrowly failed to recoup its $25 million budget) drew Sandler back to the well of creatively bankrupt money-spinners like Anger Management and 50 First Dates. It’s his career and his choice to make. The mistake was how other directors like P.T Anderson didn’t recognise Sandler’s strengths here, and lure him back for another swing of the bat.

Punch-Drunk Love concerns novelty bathroom appliance salesman Barry Egan (Sandler), a single man living in Los Angeles, subjugated by his seven domineering sisters, whom we realise suffers from deep-rooted psychological problems. A likeable but very lonely guy, Barry’s prone to losing his temper when he’s pushed too far, which means he’s not a million miles away from the kind of characters Sandler was known for playing in the ’90s. The difference is one of approach and tone, as Anderson reigned in some of Sandler’s lazier impulses, and channeled his skills into a pleasant and sympathetic performance. 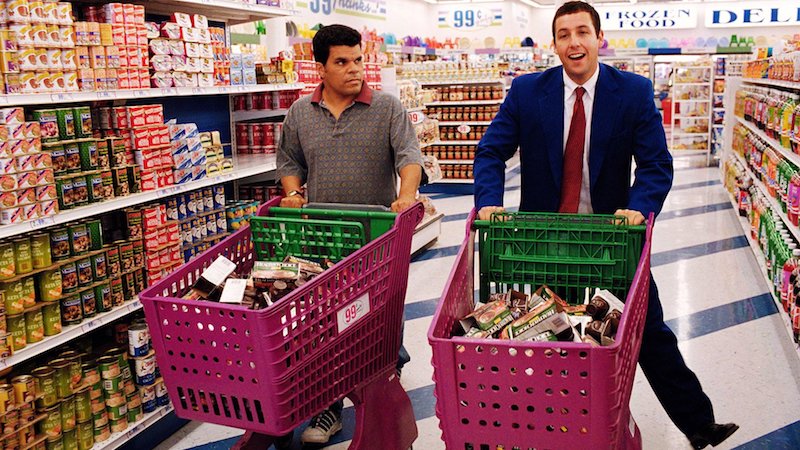 Barry’s life changes in two ways, heralded by an inexplicable car accident that dumps a harmonium (that’s a small pian0) on the gates to his business warehouse. Barry sets to work restoring the unusual musical instrument, while his life unravels and reshapes itself in odd ways: firstly, he finds himself the victim of a scam after calling a phone sex-line and giving out his personal details to a woman who tries to blackmail him; and secondly, the intriguing arrival of Lena Leonard (Emily Watson), a doe-eyed Englishwoman who works with his Barry’s sister Elizabeth (Mary Lynn Rajskub), who appears to see the depths to Barry he keeps hidden.

It’s easy to see why Punch-Drunk Love flopped at the box-office and remains a movie the mainstream overlook because most approach it with wrong expectations. Sandler’s presence (even more so today) will have you expecting something considerably stupider, and if you’re a fan of his work you’ll be frustrated there are no broad jokes and silliness. The fact it’s marketed as a rom-com is also misleading in a few ways, as the romance isn’t as straightforward as lovers of this genre tend to enjoy, while any signs of pure comedy are an acquired taste. I’m a big fan of this movie, but even I have to admit it only draws a wry smile from me a handful of times. P.T Anderson is a director of many strengths and abilities, but directing an outright comedy isn’t one of them—so it’s perhaps no surprise that Punch-Drunk Love’s few moments of slapstick seem awkwardly placed, and everything else won’t have you rolling in the aisles. 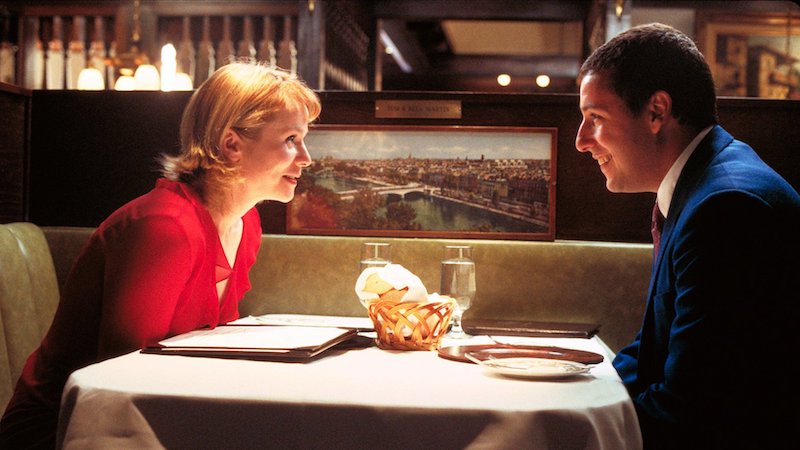 But it’s exactly because of the movie’s unique vibe and compelling strangeness that I love it. And it continues to reap rewards long after its release, largely because of the many enjoyable theories that have emerged over the years. The best-known one is that Barry’s journey is themed around Superman (there’s his blue suit/red tie combo, his girlfriend also has the initials “L.L” , his discovery of a promotional loophole that enables him to buy millions of frequent flyer miles), but there’s also one that suggests the undeniably odd Lena is an alien who’s selected Barry as a mate. The evidence there isn’t as compelling (the Apollo moon landing is seen on television, and a few DVD chapters were titled “Lena Drops” and “Alien Abduction”), but it’s nevertheless fun to revisit the movie with some of these ideas swirling around your head.

Away from all of that, Punch-Drunk Love is simply a deeply unusual and oddly engrossing movie that keeps you thinking, masterfully put together by Anderson and with Sandler capably holding your attention. And he really does rise to the occasion here, seemingly freed from the constraints his formulaic comedies place on him. I hate seeing actors underachieve, and watching Punch-Drunk Love will make the likes of Jack & Jill and The Ridiculous Six even tougher to stomach. But at least this got made, and it’s something to defend Sandler’s otherwise awful career with.

It’s not really a rom-com, but it’s beautiful and honest film about damaged people and the healing power of love, and more people need to experience it. 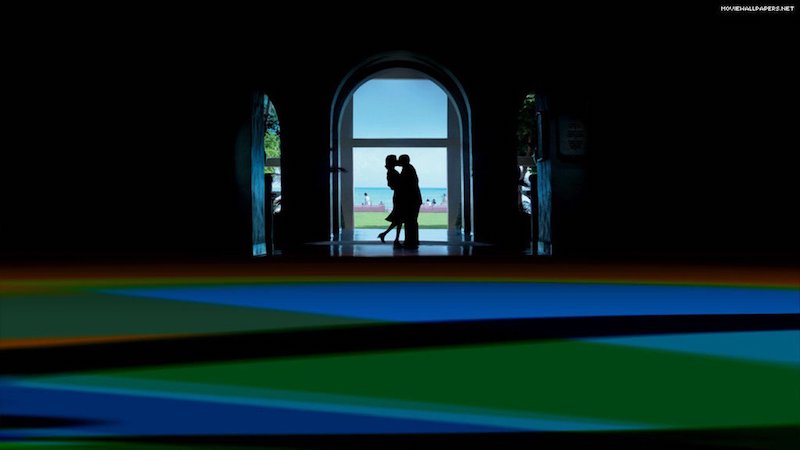 This Criterion Collection release is as definitive as you’d imagine anything supervised and approved by P.T Anderson himself. There’s a restored high-definition transfer of the movie, which looks sublime, and a DTS 5.1 surround sound audio track which perfectly showcases the baroque-futurist score by Jon Brion.

In terms of special features, there’s an Anderson short from 2002 called Blossom & Blood that stars Sandler and Watson, with music by Brion (who also appears in a separate interview). There’s also behind-the-scenes footage of a recording session for Brion’s soundtrack; a discussion of Jeremy Blake’s artwork used in the movie by Michael Connor and Lia Gangitano; yet more artwork from Blake; footage of a 2002 press conference at the Cannes Film Festival; a NBC News interview from 2000 with David Phillips “the pudding guy”; twelve Scopitones; some deleted scenes; a Mattress Man commercial; trailers; and an essay on the movie by filmmaker, author, and artist Miranda July.