Even a superb female cast can’t save this undercooked, tonally screwy disaster. The Kitchen has all the ingredients of a good movie: a great feminist premise, an all-star cast, and solid Vertigo comic-book source material. Sadly, it’s underwritten, criminally boring, and a frustrating waste of a great concept.

Whilst comic-books are often seen as the turf of boys, The Kitchen is a mostly female affair. Written and directed by the Academy Award-nominated co-writer of Straight Outta Compton (2015), Andrea Berloff, it stars Elisabeth Moss (The Handmaid’s Tale), Tiffany Haddish (Girls Trip), and Melissa McCarthy (Can You Ever Forgive Me), as the wives of incarcerated Irish mobsters. 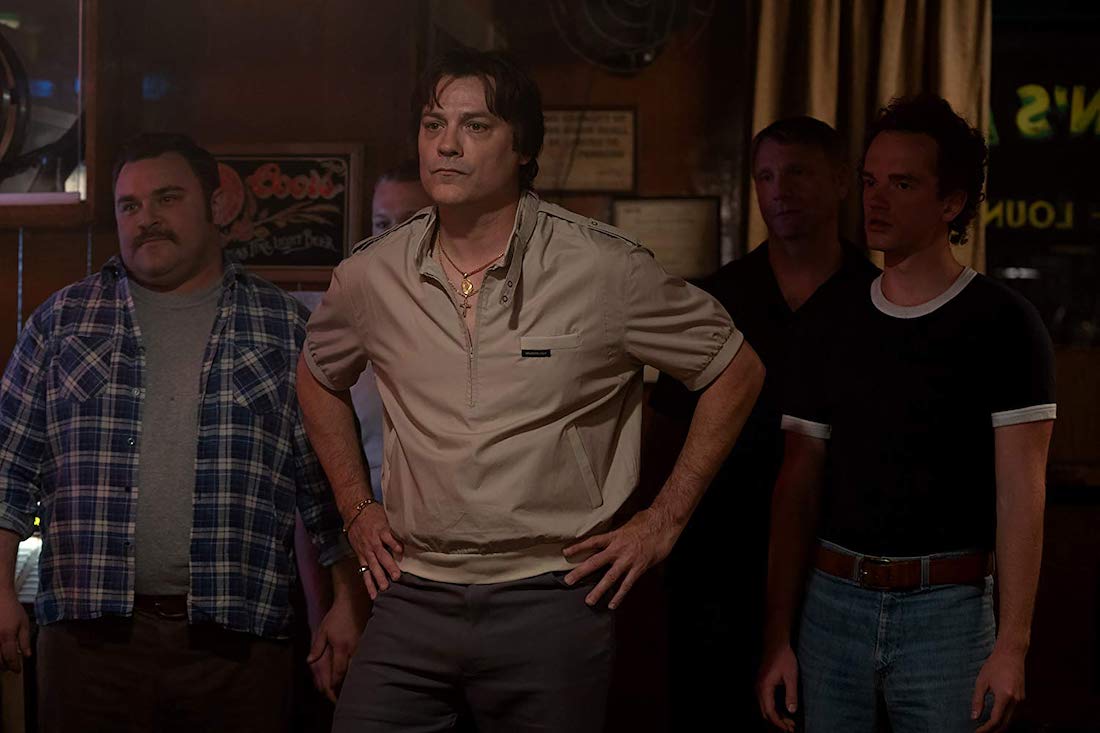 Much like Widows (2018) and the Netflix series Good Girls, The Kitchen is about ordinary yet put-upon women breaking out of their roles as mothers and wives to become criminals after their husbands are jailed. Unfortunately, this film doesn’t know if it wants to be a campy graphic novel adaptation, a gritty thriller, or a gangster drama, so the tone never settles. Berloff struggles to find a sweet spot between these genre influences and struggles to bring out the best in her talented cast.

Set in 1978, The Kitchen depicts a vivid Manhattan. Cinematographer Maryse Alberti, production designer Shane Valentino, and costume designer Sarah Edwards bring this period and environment to life. It looks great and the graffiti-emblazoned city is utterly believable in all its drab dirtiness. If only the script and direction could bring the same level of plausibility to its characters, as all the leading roles are two-dimensional and underwritten.

Kathy (McCarthy) has a solid bond with her partner (Brian d’Arcy James) and is devastated at his incarceration. Claire (Moss) has lived most of her life with a fake smile plastered across her face, cohabiting with an abusive husband (Jeremy Bobb). Ruby (Haddish) is the only woman written with some care, dealing with an unfaithful spouse (James Badge Dale) and racist mother-in-law (Margo Martindale). There are hints of greatness to the screenplay and Berloff understands society’s attitude towards women, motherhood, and racism in the 1970s… but it could’ve done so much more with its socially conscious ideas. Haddish’s place as an African-American woman in an Irish family is particularly disappointing. 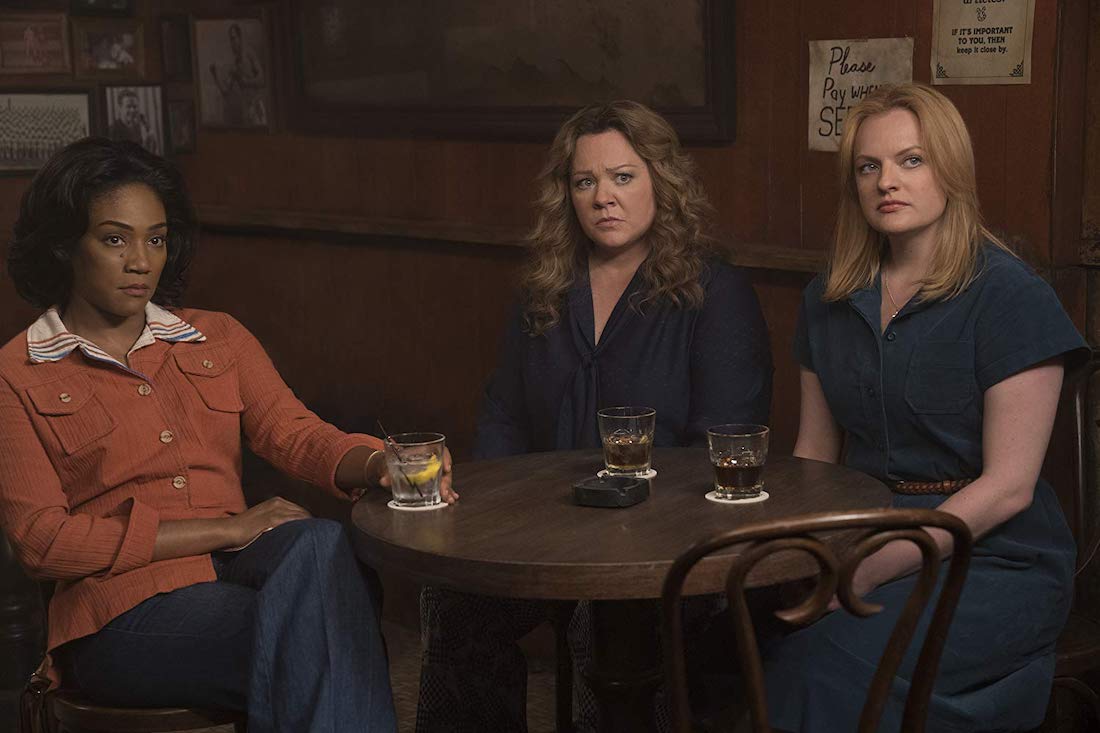 Moss does the best she can with a thin character, as the years of abuse at the hands of her husband sparks a new-found fondness for bloody murder in Claire. She forms a relationship with a soulful hitman (Domhnall Gleeson, unrecognisably menacing) who teaches her how to kill and dispose of her enemies. Far too many of these scenes are dealt with off-screen, as a little campy gore might’ve pushed this film into a more interesting direction. Despite the power of Moss, one can’t help but feel she’s played this role much better before (like in The Handmaid’s Tale, where she stares down the cameras lens like it’s the barrel of a gun), while Gleason’s excellent transformation is limited by a poor script.

Haddish shows strength as a serious actress, giving a nuanced and calculated performance. Her rivalry with formidable character actress Martindale could’ve been pushed further, however, as this film desperately needed more drama. Martindale plays a broad caricature of an Irish mob mother with no depth, with nothing in the script to indicate she should be feared. McCarthy is especially hard done by in The Kitchen. After her extraordinary performance in Can You Ever Forgive Me? (2018) proved she could be one of America’s finest character actresses, her subtleties are lost on this role and she almost blends into the background alongside Haddish and Moss. 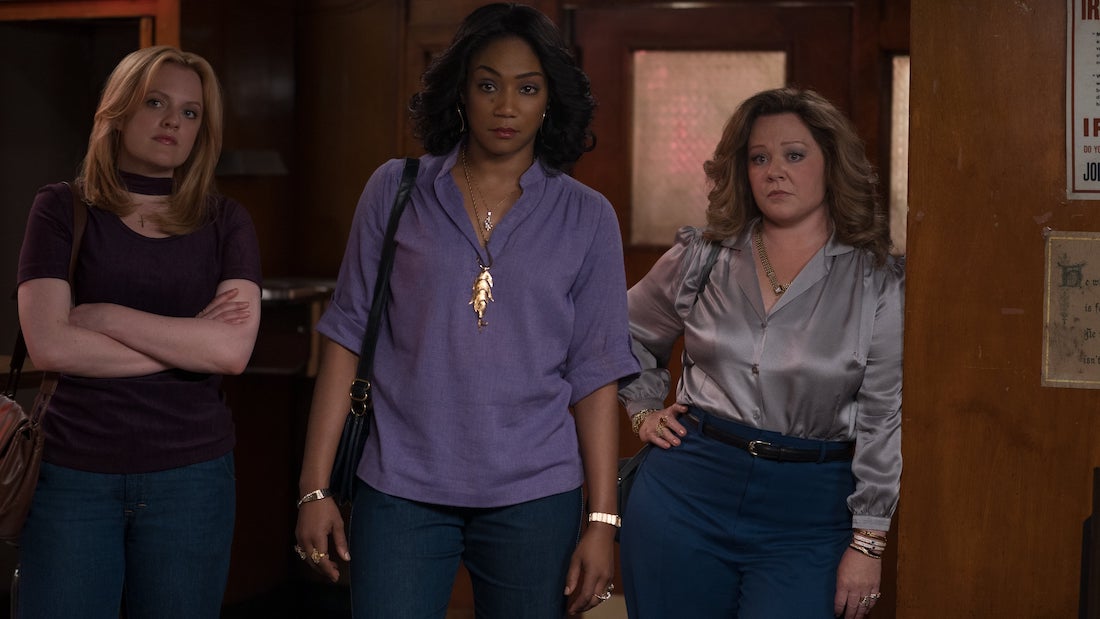 The narrative also fails to flow and feels like a selection of clips edited together. It’s choppy and unbalanced. There’s no satisfying buildup in the story. The women switch from being protective wives to hardnosed mobsters running Hell’s Kitchen far too quickly. You’ll be forgiven for feeling disorientated by the narrative’s pacing, and there are many moments where it’s tempting to rewind because it feels you missed something to explain the sudden leaps forward. There’s no way the harsh neighbourhood experienced at the beginning of the film would let these three women take over and become such fierce leaders.

The urban warfare in the latter half of the film is never downplayed but the tone here is confused. The Kitchen dips between gruesome gangster flick and a cartoony comic-book action, unsure whether to offer violence for entertainment purposes or as a sombre portrayal of gang warfare. There are additional plot twists that are much too pulpy and ridiculous, too, losing any sense of realism or credibility.

The Kitchen had potential to be a slick, provocative gangster flick with strong women killing with a cold-blooded intensity alongside a toe-tapping soundtrack of classic ’70s needle drops (Heart, Fleetwood Mac, The Rolling Stones), but it’s a disjointed jumble of scenes rammed together to form a confused and boring movie. 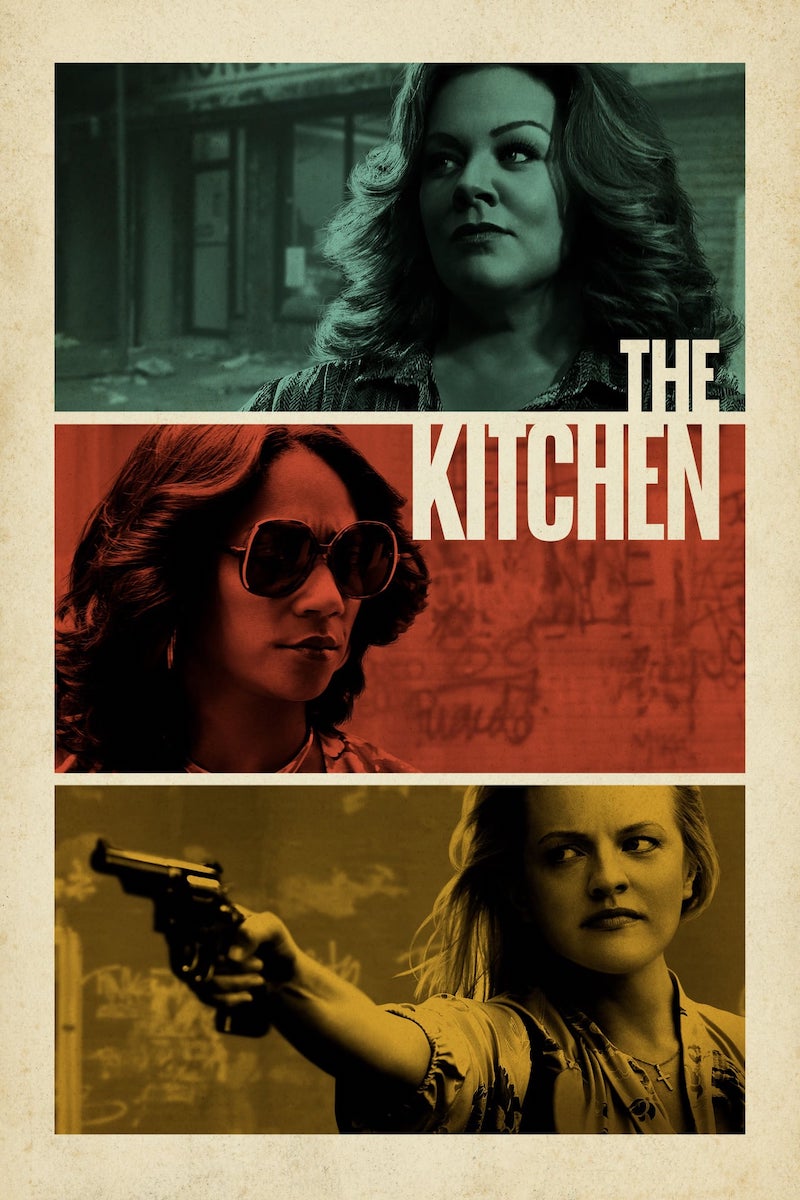