In New York, 1991, hard-up writer Lee Israel (Melissa McCarthy) is desperate to sell her next biography about the late entertainer Fanny Brice, so decides to sell a letter written by Fanny she discovers during her research, in order to pay some bills. Later realising she could’ve earned more if the missive had been more personal and salacious, Lee starts to forge letters from notable literary figures and sells them to naive antique dealers and bookshops.

Following up The Diary of a Teenage Girl (2015), director Marielle Heller makes this sometimes unbelievable true story warm and authentic. Her understated movie comes to life thanks to Oscar-nominated turns from Melissa McCarthy and Richard E. Grant. As an actress whose career’s been defined by brash comedic roles, McCarthy is remarkable and her portrayal of Lee is a funny yet poignant portrayal of a not-very-pleasant woman whose bad characteristics have become inflamed by her marginalisation. On paper, this curmudgeonly cat-lady writer is a total stereotype, but McCarthy brings a three-dimensional melancholy to her. 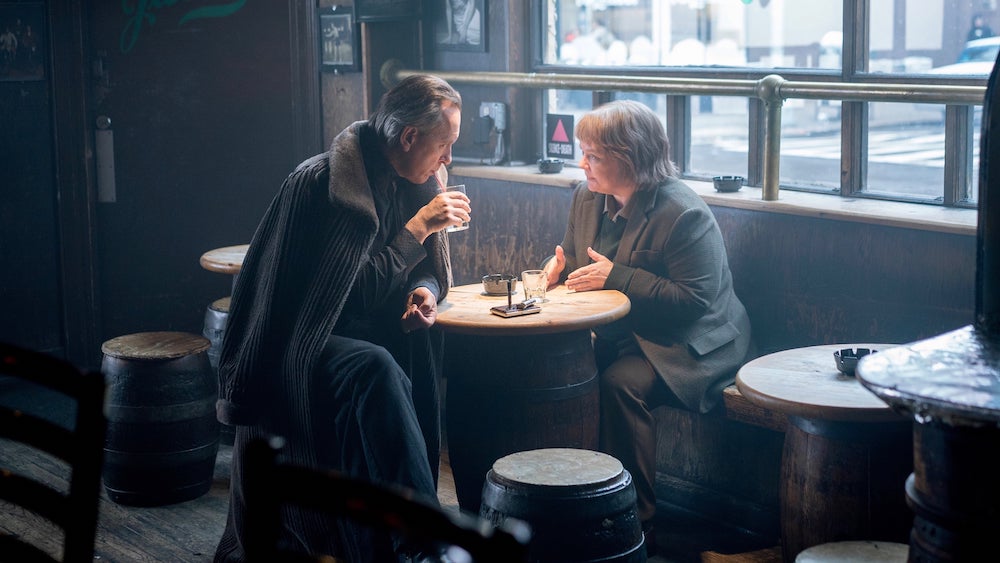 Lee’s forgeries become her primary focus once she realises there’s more money in it than celebrity biographies, and that her agent (Jane Curtin) only answers her phone to the likes of Nora Ephron. Along the way, Lee finds salvation in Jack Hock (Richard E. Grant), a gay drug dealer who hasn’t let the AIDS epidemic ruin his joie de vivre. Grant channels his most famous performances in Withnail and I (1987) and enjoys his best role in years. The friendship between a middle-aged lesbian and an ageing homosexual is rarely seen on the big screen, especially as it’s never played for laughs. I could watch hours of these two chatting and throwing insults around over booze, and never bored with their game of wits. There are comparisons to be made between this pairing and Dustin Hoffman and Jon Voight in Midnight Cowboy (1969).

Grant and McCarthy balance each other’s performance. Grant plays Jack Hock as being a decaying dandy, while Lee Israel’s comfortable being frumpy and grumpy. She struggles to connect with anyone while he can barely walk past a phone booth without flirting with it. The only things Lee can connect to is her beloved cat and a bookshop owner, allowing audiences a faint glimpse of her vulnerabilities. After seeing McCarthy in this you’ll wonder why she’d ever bother making another dumb comedy. 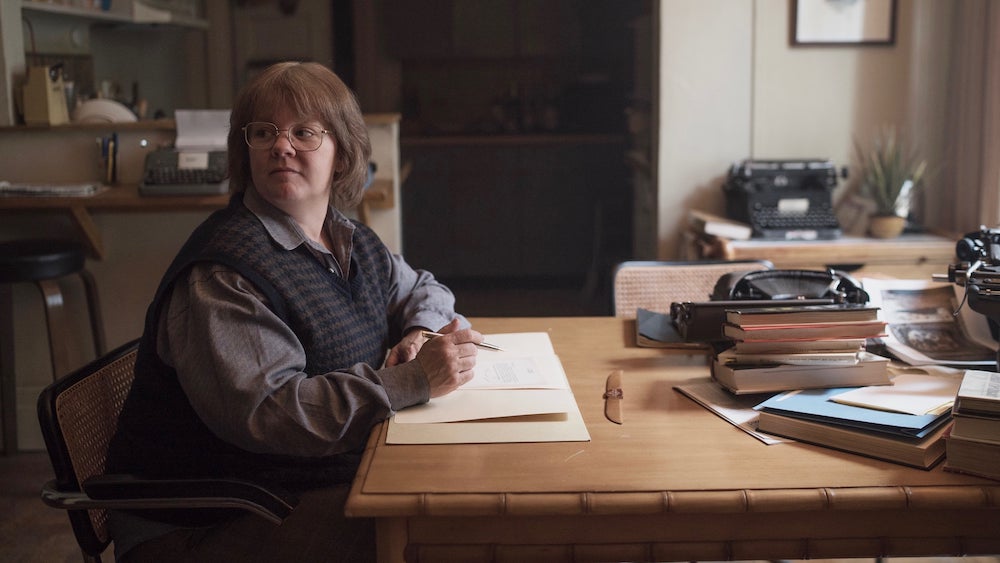 The New York these characters inhabit is grey, dreary, and filled with dusty antique bookshops. This scenery is less the Polaroid hues of Heller’s previous film and more akin to the metropolis Woody Allen gave us in Manhattan (1979). The ideal of 1990s bohemia could’ve been romanticized but, much like the script’s LBGTQ themes, it’s a very low key affair.

Adapted from Lee Israel’s 2008 confessional autobiography, Can You Ever Forgive Me?: Memoirs of a Literary Forger, Nicole Holofcener and Jeff Whitty have written one of this awards season’s smartest scripts. Can You Ever Forgive Me? could’ve been plotted like a crime thriller but, instead, they chose to concentrate on extreme loneliness and human fragility, especially those who’ve been left behind by the world. There’s great attention to detail with Lee’s scams, showing her buying old typewriters and using a battered old television as a lightbox. The movie also manages to create incredible tension despite a relatively predictable narrative and ending. 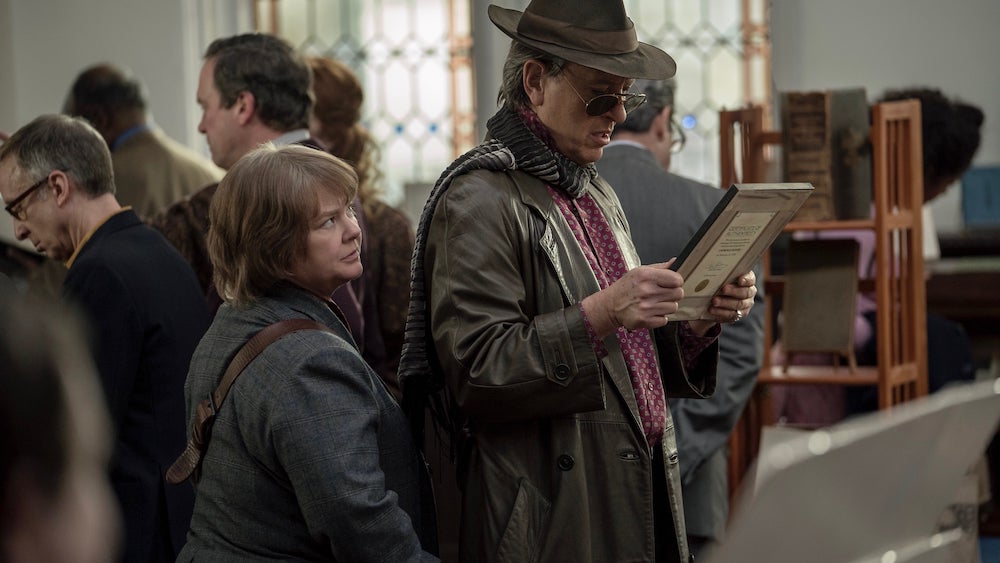 The story makes audiences want to spend time with two people who aren’t very nice, somehow, and you’re rooting for the pair of them by the end. It’s clear everyone has a deep fondness for this woman; a person most of us would despise if we sparked a conversation up with her on the tube.

It’s hard to imagine Can You Ever Forgive Me? was originally going to star Julianne Moore and Chris O’Dowd with Holofcener directing. It’s only because Ben Falcone (McCarthy’s husband) shared the script with his wife, after being cast as the duped bookshop owner, that McCarthy came aboard after recognising the sharp intelligence of Lee Israel. Holofcener then opted to step down as director, encouraging Heller to take her place and recast the movie. As fantastic as Julianne is, she could never play Israel as the dowdy, spiky character McCarthy plays. 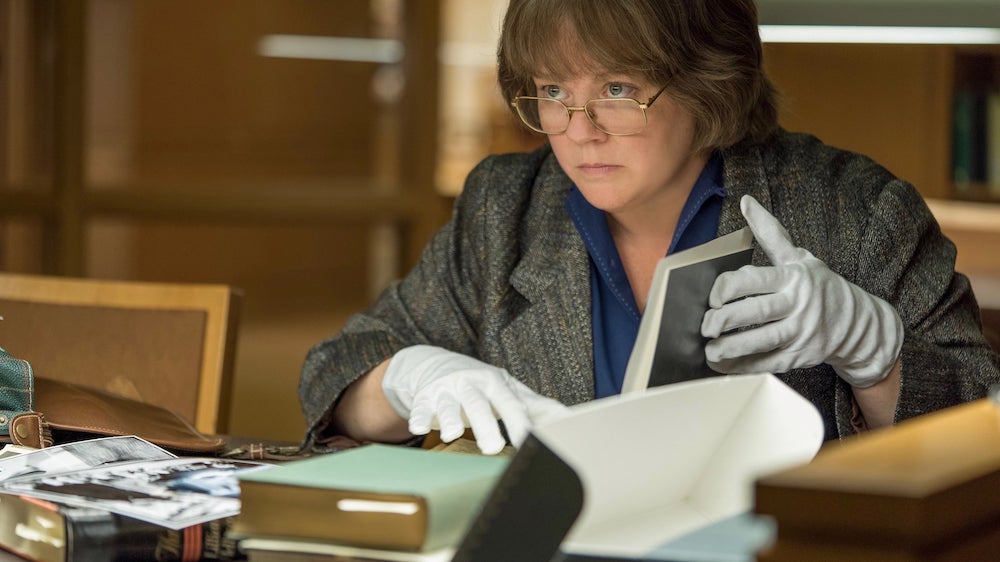 Lee discovers she has a talent for forging letters from the great wits of Dorothy Parker, Noel Coward, and Katherine Hepburn. In an age where everyone’s being encouraged to sell a false version of themselves online, this is a cautionary tale. When you hear Lee’s complaints at how much Tom Clancy makes for the same churned out plots, and see how much money collectors will pay to read about the private lives of famous writers, you won’t disagree with her motives.

Can You Ever Forgive Me? is a delight. On paper, it’s a pretty uninteresting heist movie better suited to the Coen Brothers but, in reality, this is a heart wrenching and relatable portrait of loneliness. Don’t be lured into thinking this is light-hearted fare with a dandyish Grant and a crotchety McCarthy, either, because it’s deeply moving, unexpectedly profound, and their last scene together will surely bring a tear to your eye.