The prison escape film is one of the more irresistible sub-genres and, decades before Escape Plan (2013), Sylvester Stallone made Lock Up with director John Flynn (Rolling Thunder) towards the back-end of his mid-1980s peak with the Rocky and Rambo sequels. Lock Up was KO’d at the box office, only making back $22M from a $24M budget, and is barely ever mentioned these days, but it’s a great deal more entertaining than many of Stallone’s other efforts around the same time, like Rocky V (1990) and Stop! Or My Mom Will Shoot (1992).

Frank Leone (Stallone) is another of the actor’s salt of the earth tough guys, introduced fixing cars in a garage, hanging out with his beautiful girlfriend Melissa (Darlanne Fluegel), and teaching kids how to play football. It’s a familiar setup for prison films, as audiences are just waiting for Leone to become the unfortunate victim of some injustice that means he gets thrown into the slammer, but Lock Up sidesteps expectations nicely. It’s revealed that Leone’s already a convict, but he’s a model prisoner reaching the end of his sentence and has been given various perks. But inevitably the story sours when Leone returns to his low-security cell, as he’s forcibly removed by guards without warning and sent to the maximum-security hellhole of Gateway Prison. 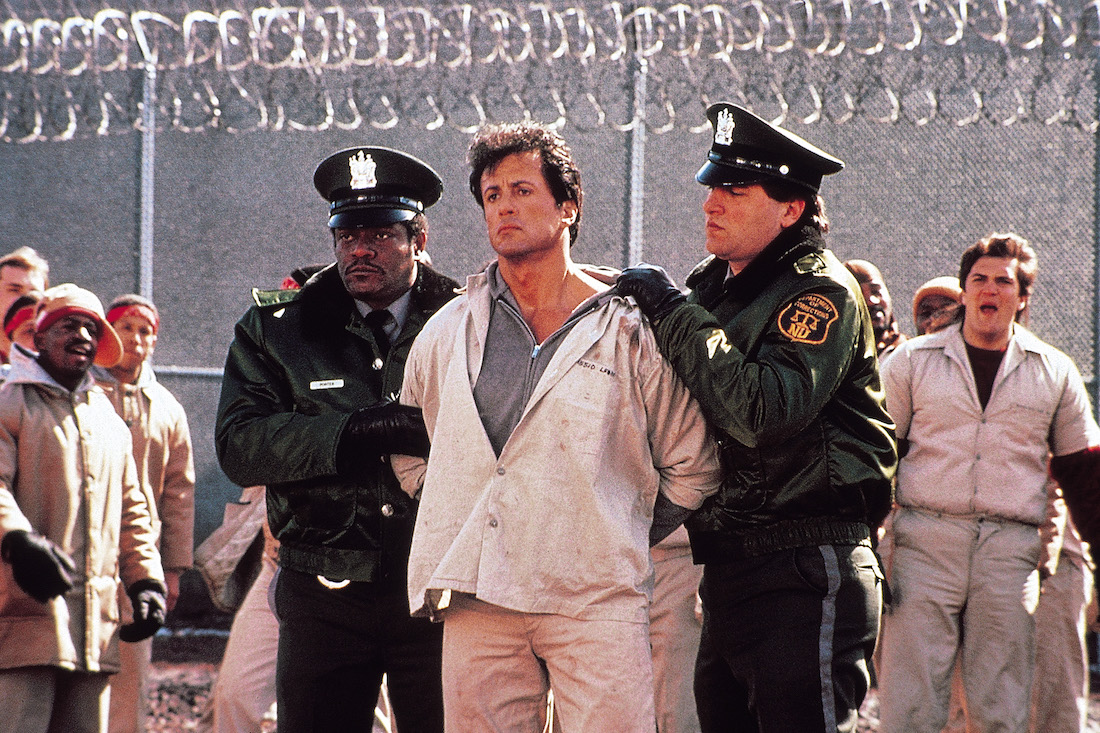 It transpires that Gateway’s Warden, Drumgoole (Donald Sutherland), has beef with Leone that goes back to when he was in charge of a better prison that Leone escaped from to see his terminally ill mentor when his request for a furlough was denied. Drumgoole was punished for the lapse in security with a career-screwing transfer to Gateway, while Leone got off relatively lightly with more years added to his sentence but a move to the light touch facility. So now Drumgoole’s out for vengeance, with a warped plan to give Leone six months of hell at Gateway, which appears to be full of corrupt prison guards, violent offenders, an alpha male ‘yard boss’ called Chink Weber (Sonny Landham) who takes a strong disliking to Leone as a credible rival, and frequent time spent in solitary confinement or being gassed half to death for louses.

I’m a sucker for films where likeable men are sent to a tough prison, having to get through the terrible experience through sheer force of will and a desire to never have their spirit broken. Lock Up is a solid example of this, as Stallone’s on charismatic form playing the kind of character his Hollywood career was built on thanks to underdog Rocky. Just seeing him grit his teeth and endure Gateway’s unfair regime, while making alliances with other inmates like weaselly old-hand Dallas (a debuting Tom Sizemore), naive youngster ‘First-Base’ (Larry Romano), and gruff mechanic Eclipse (Frank McRae), is very entertaining to watch unfold. It also makes a change for Leone to not be a ‘new fish’ going to prison or the first time, but a veteran of the system who can teach others how to get through their time. 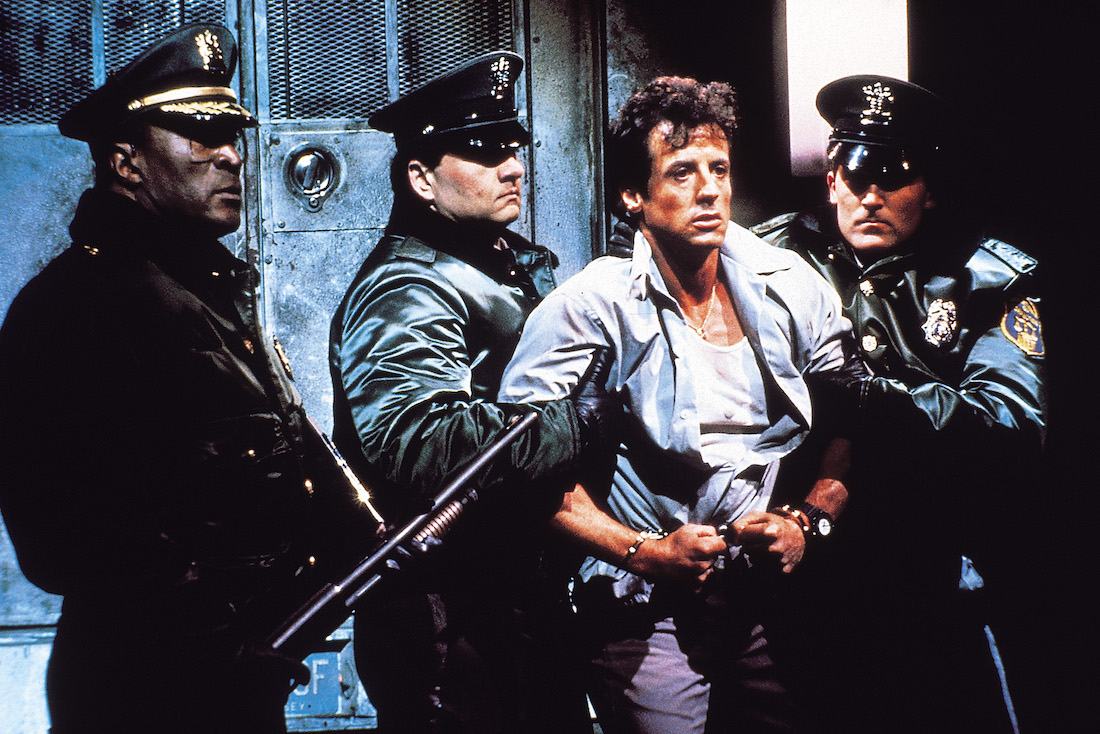 There are a lot of familiar faces to spot, or some that aren’t so familiar because they’re so young and success for them came years after Lock Up was released. But I’m sure connoisseurs of ’80s films will enjoy seeing Sonny Landham (Predator) as Leone’s nemesis, Frank McRae (48 Hrs.), and John Amos (Coming to America) as a badass guard who comes to see the decency of Leone and the corruption of his superiors. A young Danny Trejo (Desperado) even appears as a gang member.

It’s strange to note that the Razzie Awards picked on Lock Up that year, nominating it for ‘Worst Picture’ and ‘Worst Actor’ for Stallone when it’s now such an entertaining throwback most haven’t seen because of its non-existent reputation. The only thing I agree with, somewhat, is that Donald Sutherland (nominated for a ‘Worst Supporting Actor’ Razzie) isn’t particularly good despite sporting a great Hitler-esque look as Drumgoole. It seems like Sutherland was going through the motions and didn’t really want to be there, which is perhaps why his character disappears for extended periods of time, or mostly stands about in windows watching events. He’s not bad enough to ruin the film, but I do wonder if Lock Up would have been remembered better if they’d cast an actor more committed to delivering a memorably hateful bad guy. The film really needed someone who could chew the scenery better. 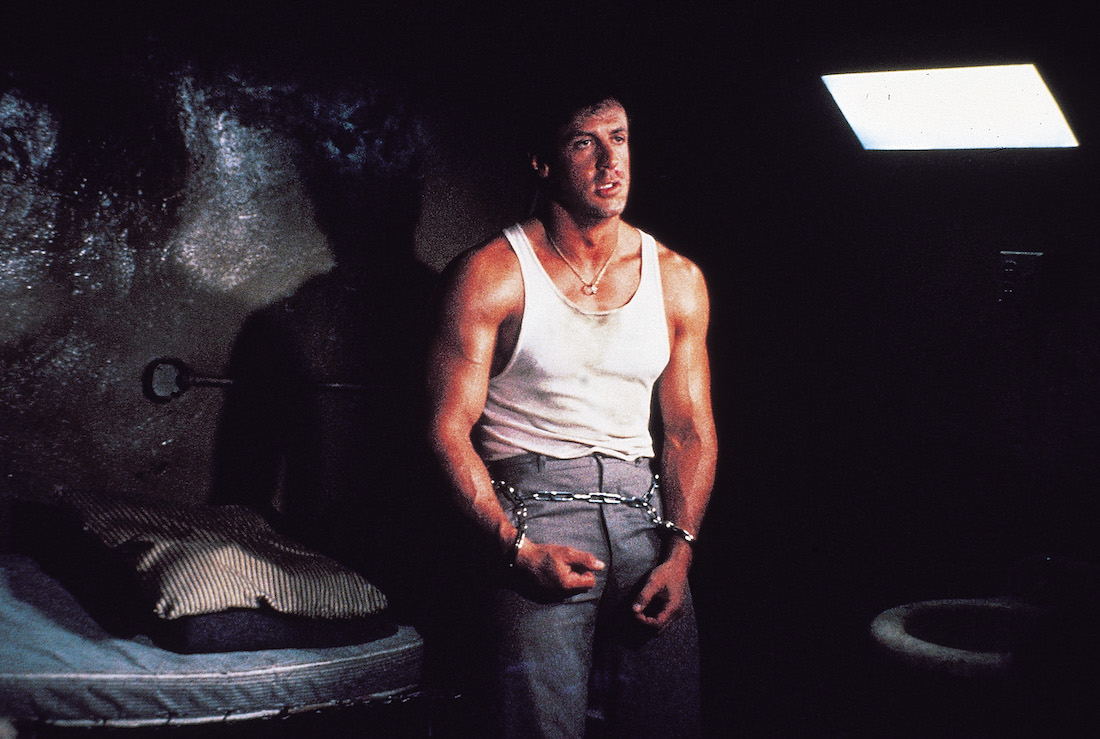 However, Lock Up remains a pleasant surprise. It’s not exactly unpredictable, but there are plenty of enjoyable set-pieces built around various ways Leone can get beaten down by the system but occasionally rise above it for a small victory or two. Every prison escape movie has these sorts of scenes, involving abusing guards, inmates enforcing their hierarchy, the use of shanks to kill troublemakers by stealth, illicit gambling, and moments of joy when prisoners briefly enjoy a moment of freedom and expression before the system slaps them back into place. The best of those is a slightly bizarre sequence involving a lovingly restored Mustang.

Lock Up isn’t an overlooked masterpiece, but it’s an efficient prison film that gets more right than wrong. Maybe it wasn’t appreciated back in ’89, but decades later it’s entertaining to see Stallone still in his physical prime, while the lingo and cliches of the genre haven’t dated too badly. There’s even a decent score by Bill Conti (Rocky)—hence a ‘montage’ sequence of inmates repairing a car instead of preparing for a boxing match?—and John Flynn seems committed to the material and doing his best to serve it. I only wish he didn’t keep the audio in slow-motion sequences because of how Stallone’s voice at half-speed sounds like comical groaning. 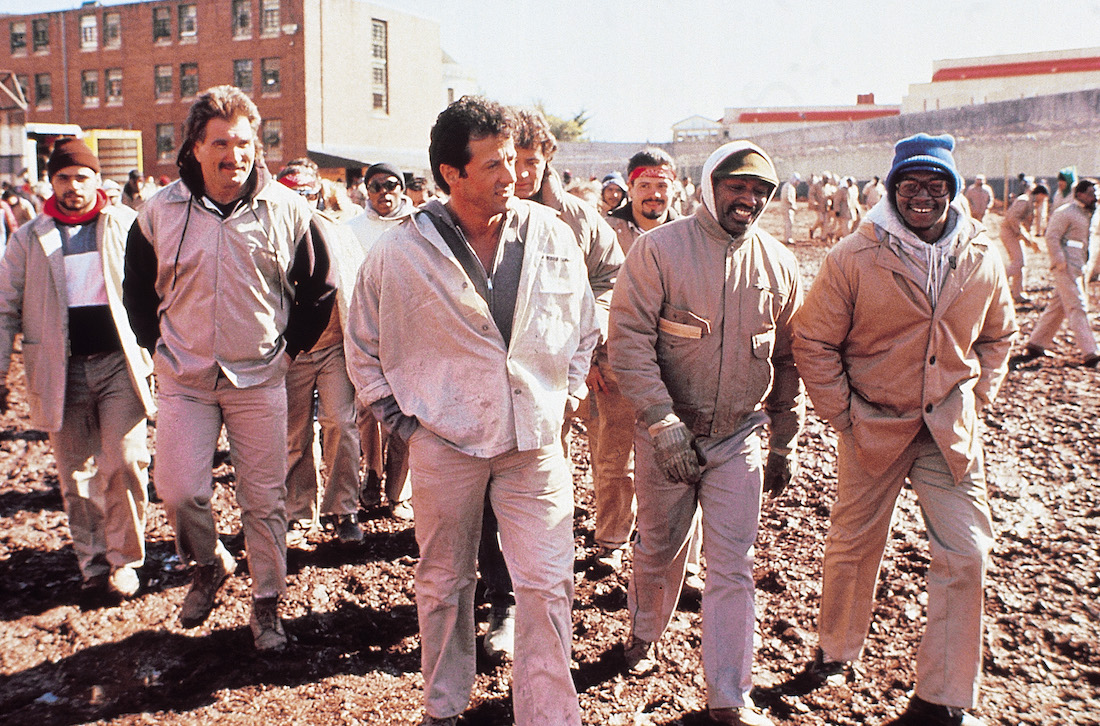 Stallone has since said Lock Up lacked enough maturity, which is probably true if his intention was for this to be more prestige drama than B Movie action. There are definitely a few tragic moments and double-crosses that hint at a movie that wanted to be treated more seriously, but there’s ultimately too much incredibility for Lock Up to be mentioned in the same breath as any classics. Could you really just transfer a model prison to a shitty prison like this? Wouldn’t his girlfriend be able to see Leone a lot sooner? How are all of the guards so damned corrupt and not just a few bad eggs? The villains are also very broadly written and cartoonish for the most part.

So maybe this film was a failure in some people’s eyes, but 30 years later it’s easier to enjoy Lock Up for the formulaic but entertaining movie it turned into. I was more invested in Lock Up than I was any of the dopey Escape Plan movies, that’s for sure. 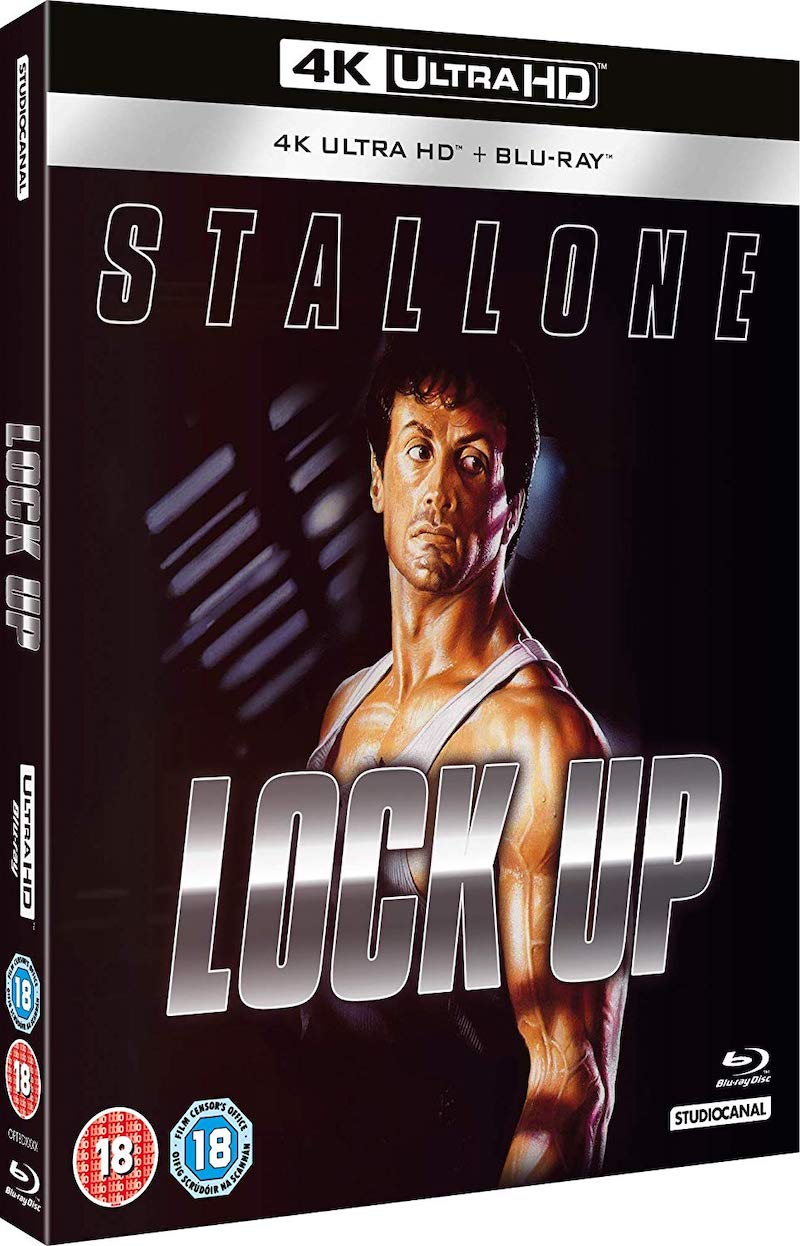 StudioCanal presents Lock Up with a 4K 2160p Ultra HD presentation retaining its 1.85:1 aspect ratio. This was shot on Panavision cameras on 35mm and, like many older pre-digital movies, the 4K transfer helps re-energise the impact of the movie. Film grain is nicely resolved with only a few darker scenes featuring blotchier markings, and the colours really pop in some moments. It certainly doesn’t look like an old film and the HDR boosts contrast to pleasing effect with great shadow detail.

No Dolby Atmos, but the DTS-HD Master Audio 5.1 sound mix is sufficient and punchy when it needs to be, although it’s the kind of movie that’s more about handling dialogue at the front-centre. There’s subtle atmospherics moving around the rear channels, however, helping sell the prison environment.

Written By
Dan Owen
More from Dan Owen
This is a show with a very leisurely pace, so you can...
Read More