James Cameron’s sci-fi movie The Abyss is now 30 years old, and it’s still an impressive experience thanks to its pioneering VFX and filming techniques. It also remains a tense underwater thriller and romance.

When a nuclear submarine (“World War Three in a can”) sinks in mysterious circumstances, an underwater drilling platform called Deep Core, operated by Virgil ‘Bud’ Brigman (Ed Harris) and his team, is enlisted to assist a SEAL deployment. Bud’s accompanied by his ex-wife Lyndsay (Mary Elizabeth Mastrantonio), who designed Deep Core, to salvage the submarine before the Russians do. Later, a hurricane cuts off communication to the outside world while political tensions over the incident escalate… and, following an encounter with “something else”, the SEAL commander (suffering from high-pressure nervous syndrome) launches a missile at what may be a Non-Terrestrial Intelligence (NTI). Only Bud, in a high-tech diving suit, can venture into the trench to disarm the missile before it can destroy the NTIs in the ultimate declaration of war. 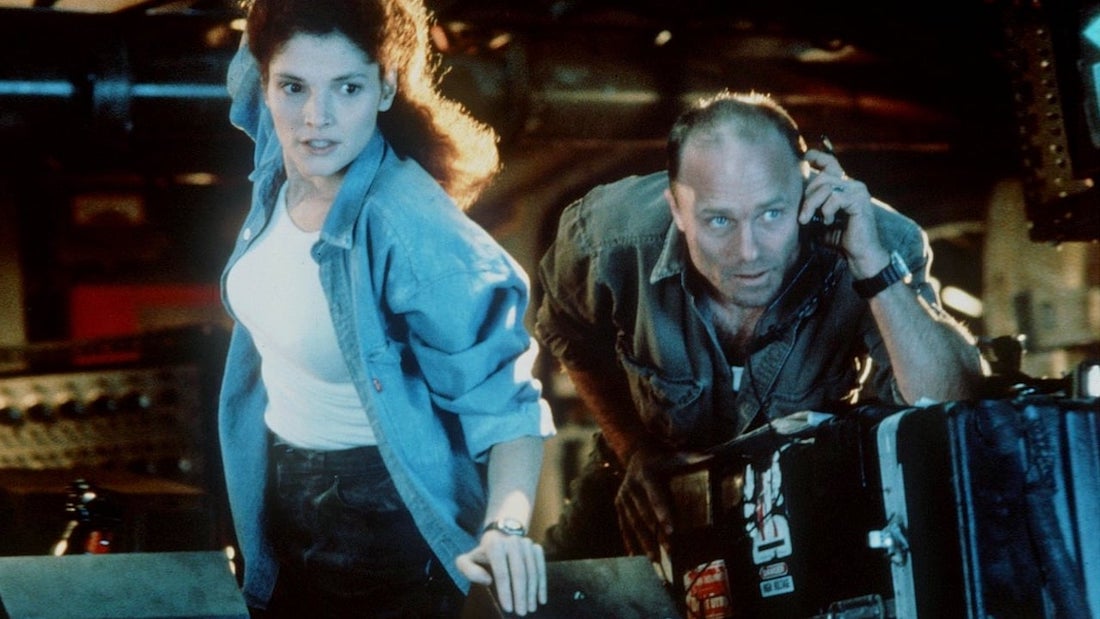 Sci-fi, art, and the Big Blue.

Cameron wrote the story that developed into The Abyss when he was 17. As a boy, he was inspired by science fiction and real scientific developments, such as NASA’s Apollo program and the underwater explorations of Jaques Cousteau. He even trained as a diver when he was a teenager, living 300 miles away from the nearest ocean, such was his passion for the deep! These influences, plus his own artistic leanings, led him into a career as a filmmaker.

He worked with the great Roger Corman on Battle Beyond the Stars (1980), a cheesy Star Wars (1977) knock-off, and briefly on B Movie horror sequel Piranha II: The Spawning (1982), before directing successful sci-fi movies The Terminator (1984) and Aliens (1986). Those hits gave him the budget and clout to develop The Abyss as a film he wanted to shoot as much underwater as technically possible. He made his intentions clear when assembling the cast and crew, but nobody quite realised just how far Cameron’s vision would push them! 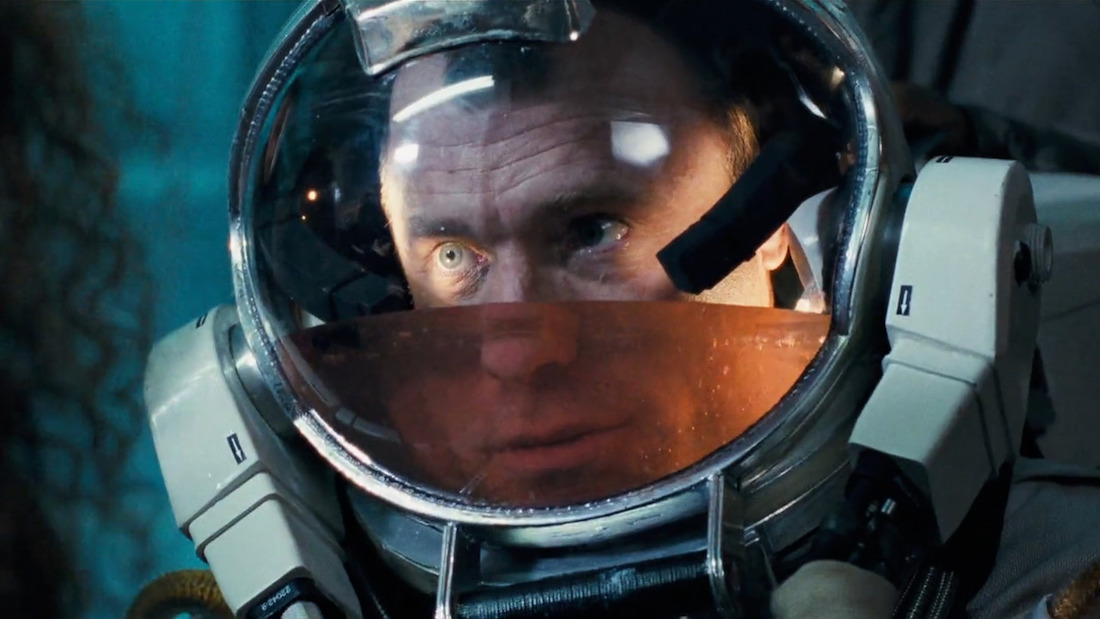 Life’s Abyss and then you dive…

The cast spent two weeks in the Cayman Islands training to dive, before arriving on set to familiarise themselves with their hard helmets (designed to clearly show the actor’s faces), weighted suits, and the many submersibles used in the film.

However, filming was beset by technical problems. Algae blooms which reduce vision had to be controlled by chlorination so fierce it burned the crew’s skin and bleached their hair! As autumn arrived, storms tore away the tarpaulin and cold nighttime filming had to simulate underwater darkness.

The crew and cast were now spending hours underwater together, and tensions began to mount. Cameron often watched the dailies while decompressing to save time. Ed Harris and Mary Elizabeth Mastrantonio both had scenes that required them to hold their breath for long periods, and during several difficult takes of the scene where Lyndsey ‘dies’ and is resuscitated, the film ran out in the camera—which was almost the final straw for Mastrantonio. The actress later said that “filming The Abyss was many things but fun it was not.”

The fluorocarbon liquid which Bud is meant to breathe in for the deep suit dive was in fact ordinary water, and Ed Harris had to hold his breath inside the helmet, which could be flipped open to empty so he could breathe from a regulator after the take. On one occasion he had to wait some time for the oxygen to come, then inhaled water and air together when the regulator was offered upside down by mistake—an unpleasant and frightening experience, the stress of which made Harris weep on the way home from the set. To keep their morale up, cast and crew came up with many quips including “Life’s Abyss and then you dive.” 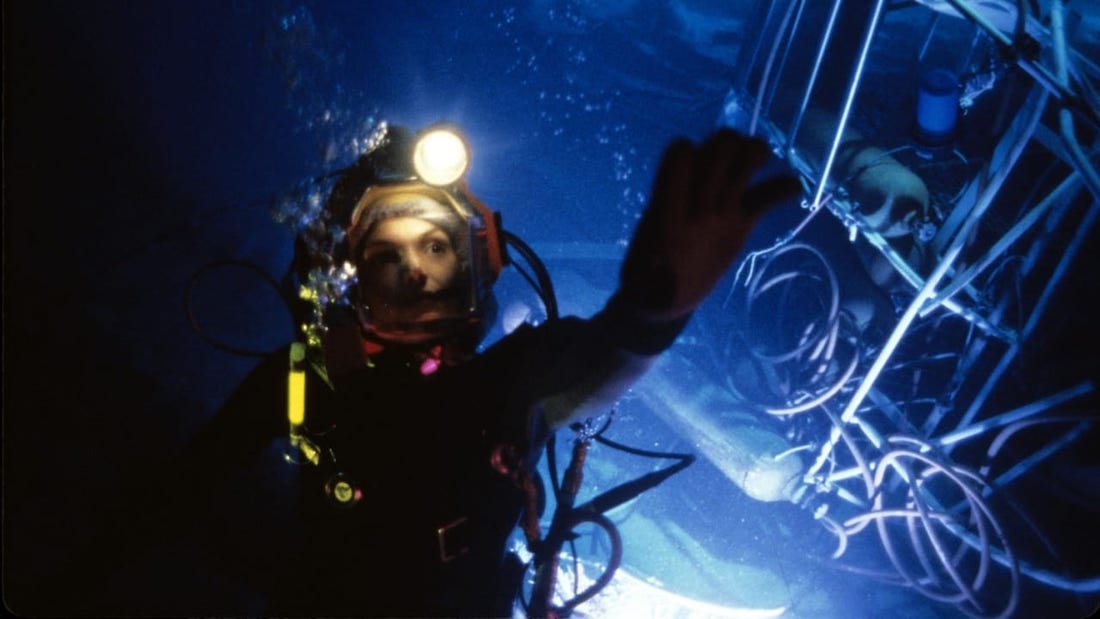 … the Abyss also looks into you.

The film begins with the famous Nietzsche quote “When you look into the Abyss, the Abyss also looks into you”, echoing the reactions of the protagonists to the stresses of the movie and their character’s encounter with an alien species. The hazardous scenarios keep ratcheting up the tension day by day. For example, the crane securing the Deep Core base to the ship on the surface was ripped loose by the hurricane and almost crashed down on top of Deep Core—it settled on the sea bed beside them to their relief, only to carry on over the edge of the trench dragging them further down, naturally!

There is also an intense love story between ex-husband and wife Bud and Lyndsey. Bud still wears his wedding ring even after their divorce, but the arrival of Lyndsey the “professional cast-iron bitch” makes him throw the ring down a chemical toilet. He immediately fishes it out (getting a blue hand in the process) and the ring later saves his finger from being crushed in a hydraulic door. Their relationship is touching (at one point Lyndsey tells a sleeping bud “Virgil turn over” to stop his snoring, and he automatically obeys in his sleep). Their love is stripped down to essentials by their ordeal, including being trapped in a damaged submersible with only one suit between them—and Lyndsey’s voice keeps Bud going through the final deep-sea dive. Their true love for each other surfaces along with deep core (delivered to the surface by NTI’s beautiful ship) by the end of the film. 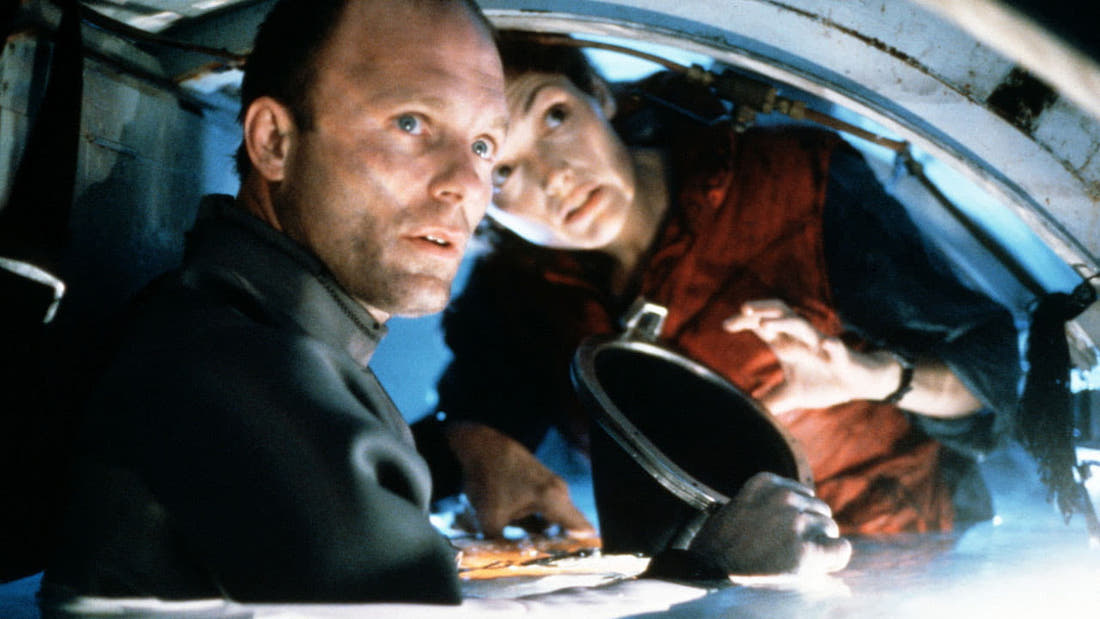 Cameron had to cut the film for its 1989 release as it was considered too long by the studio. An extended Director’s Cut was eventually released on VHS in 1993 and provided a more rounded narrative—including a sequence where the NTIs threaten seaboard cities with tsunamis, only to halt this destruction when they realise Bud’s self-sacrifice suggests a more hopeful side to humanity. They warn mankind to “stop harming each other and put away dangerous toys”, in a message reminiscent of the ecological one underpinning The Day the Earth Stood Still (1951).

Incidentally, the sequence where a rat is used to demonstrate the breathing in of fluorocarbon liquid was cut in the UK, at the request of the RSPCA. Five rats did indeed breathe fluorocarbon liquid and were checked out by vets after surviving their experience.

The Abyss cost just under $50M dollars to produce and grossed $90M at the box office. It won an Academy Award in 1990 for ‘Best Visual Effects’ and was nominated for ‘Best Cinematography’ and ‘Best Sound’. Critically, it was well-received but some thought it had an overly happy ending (made more abrupt by the removal of the tsunami wave sequence in the initial theatrical cut). 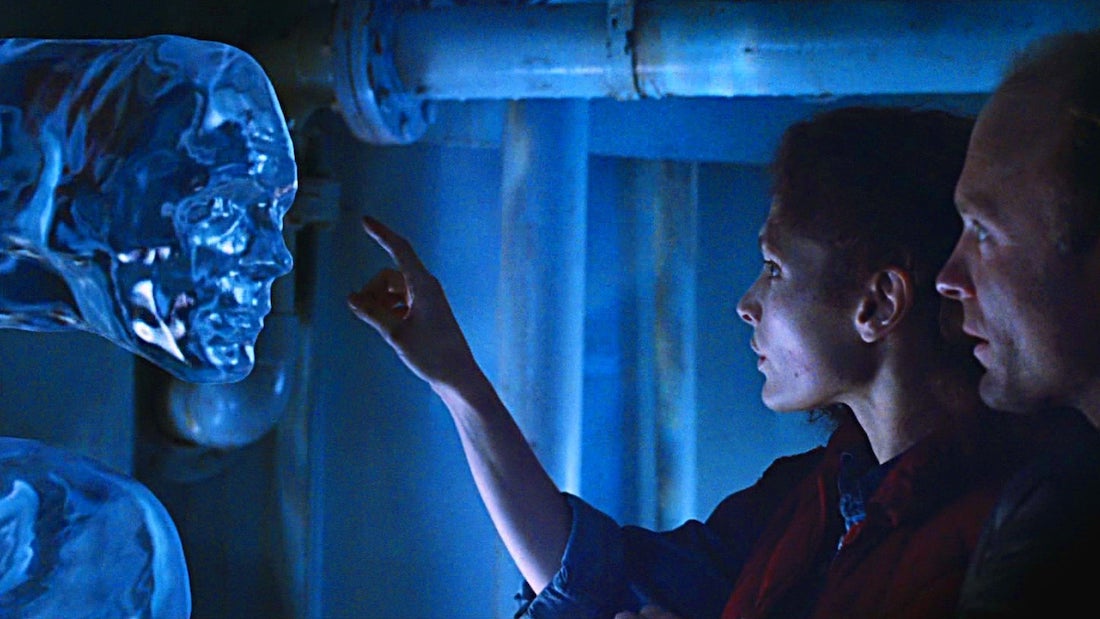 From Abyss to Avatar

The film was groundbreaking in its use of CGI. Industrial Light and Magic (ILM) created the ‘water tentacle’  that rises from the moon pool and explores the Deep Core base as an extension of the NTIs. It mirrors the faces of people to communicate (images of the actor’s faces were captured by lasers for this early digital effect). The actors were actually interacting with a bit of hosepipe held by a crewman. Cameron used the same technique to greater acclaim in Terminator 2: Judgment Day (1991), as the basis for the villainous T-1000 robot played by Robert Patrick.

Cameron’s continued fascination with the ocean led to his blockbuster film Titanic (1997), which opened with underwater footage of the real HMS Titanic wreck captured via submersible. He also went on to make underwater documentaries investigating deep-sea vents and shipwrecks, such as Expedition Bismarck (2002) and Ghosts of the Abyss (2003).

The Abyss is a treasured film because it reveals our inner space: the deep-sea trenches only a few can explore for real, and the human psyche. It’s an uplifting first contact movie, too. The bioluminescent NTIs that manipulate seawater and are beautiful creatures that glide like angels and zip by at high speed through the depths. We can share in the dangers and Bud’s heroism in making such sacrifices to save the NTI’s from man’s hostility, an act that saves humanity from retribution.

The Cold War may have passed, but the message to embrace change and “the other” in order to adapt and thrive is perennial sci-fi optimism that makes The Abyss so rewatchable. Respect to James Cameron’s team for producing such a great film despite such adversity! I’m looking forward to a version of the film on Blu-ray, which has been notoriously tardy to arrive on that HD format, but now there are credible rumours of a 4K restoration. 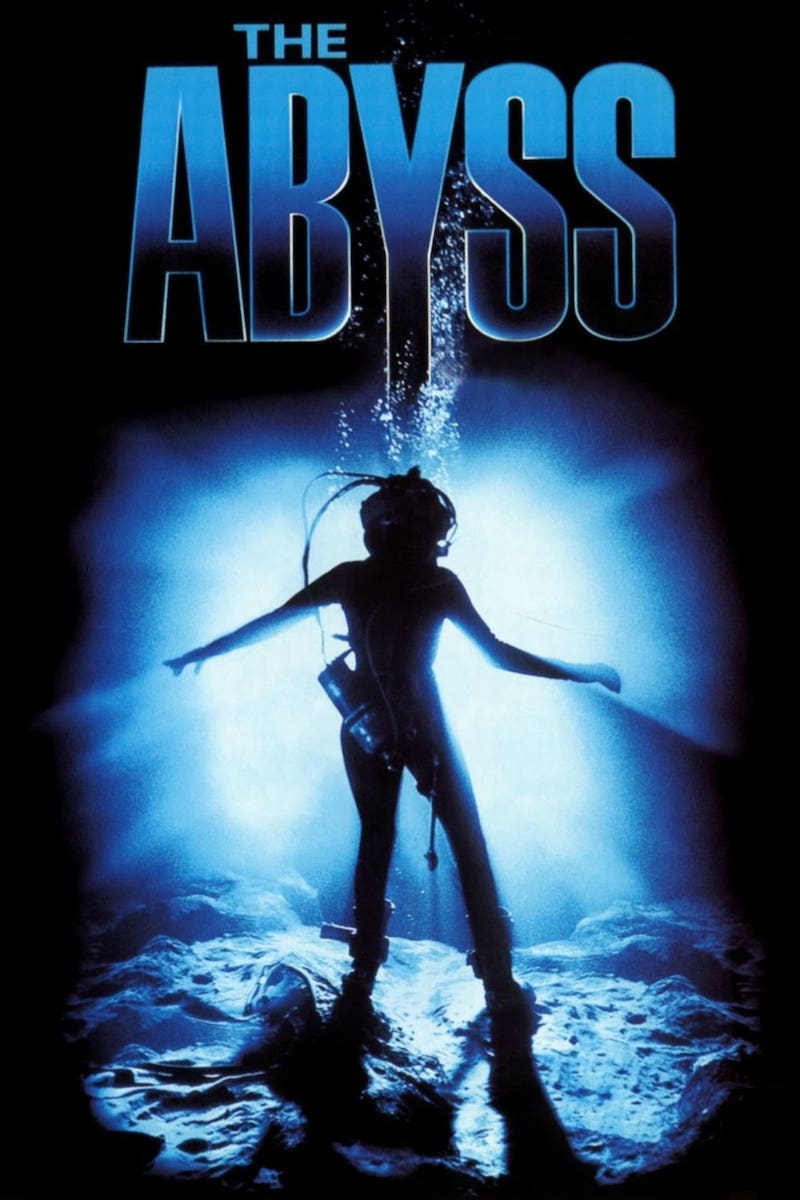