After losing a powerful orb, Kara Zor-El, Superman's cousin, comes to Earth to retrieve it and instead finds herself up against a wicked witch.

Marvel Studios had made almost 20 films before Ant-Man and the Wasp (2018) included a female character in the title, and an actress fronted her own film with Captain Marvel (2019). But that’s nothing on their rivals DC, who took a remarkable 76 years to give Wonder Woman (2017) her own live-action movie… although the result is what opened the flood floodgates. To be fair, 33 years earlier, DC dipped a toe into the water with Supergirl, but the character’s 1984 debut retained the worst elements of the Christopher Reeve Superman movies and didn’t capture what made the first two classics.

Having also survived the destruction of Krypton, young Kara Zor-El (Helen Slater) and a small colony now survive in a strange “inner-space” city. But when their power source is jettisoned to Earth, Kara follows after it and arrives in our world, realising her baby cousin’s Kal-El’s since become ‘Superman’. And she must follow in his footsteps to save the day when an aspiring witch Selena (Faye Dunaway) uses her people’s energy source for evil. 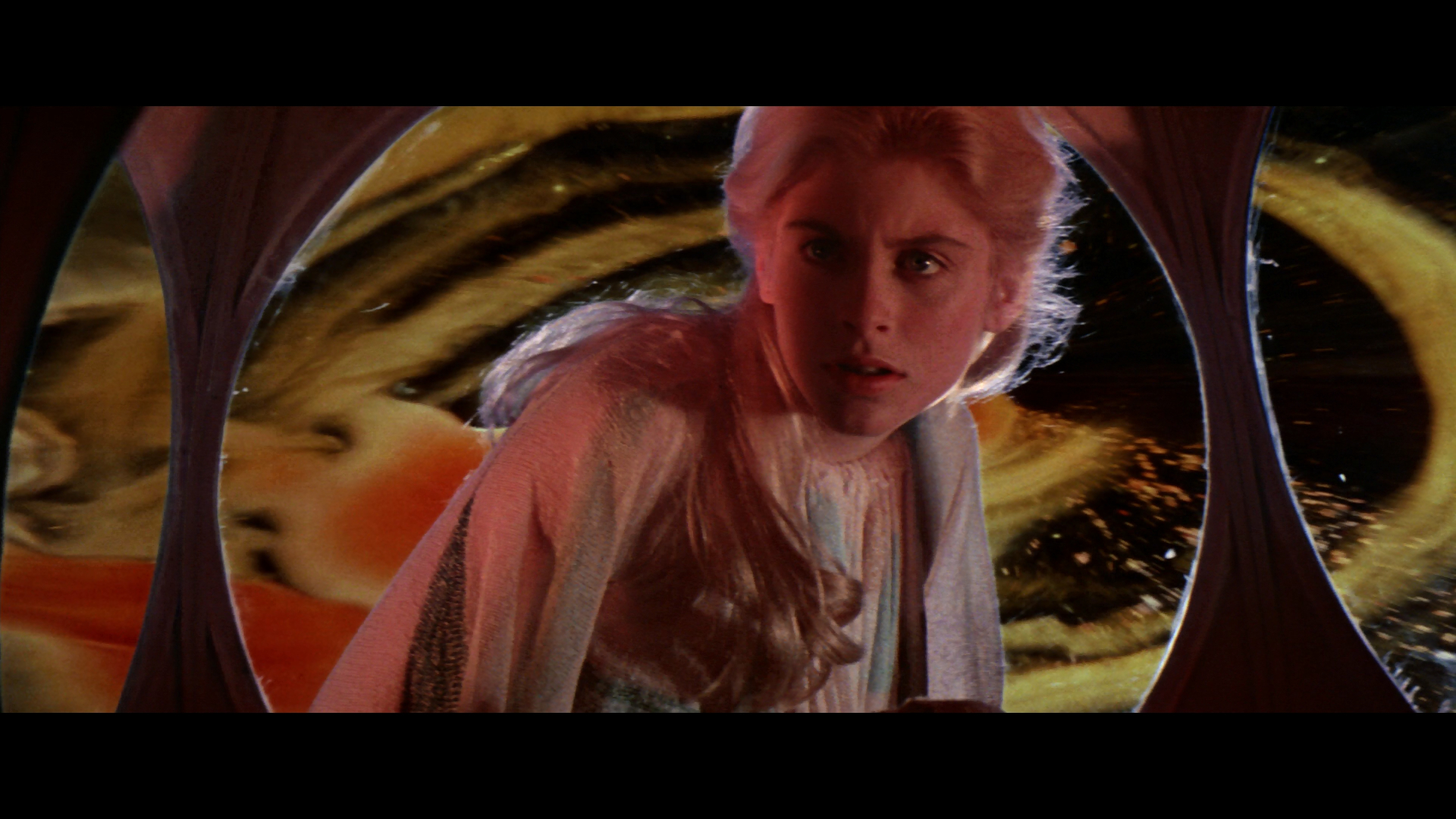 After various comic-book experiments—from a super-powered Lois Lane to Jimmy Olson’s magic wish of “what if Superman was a girl?”—producers Alexander and Ilya Salkind bought the rights to Supergirl along with the Man of Steel, already predicting many sequels and spin-offs. And after the poor reception to Superman III (1983), they opted to revitalise the Super-brand with a woman in the lead. It’s a trick DC utilised again, decades later, as Wonder Woman repaired the damage inflicted by the poorly-received Batman v Superman: Dawn of Justice (2016).

Perhaps Marvel’s trend of leaving title credits till the end has spoiled me but I’m astonished by how slow the openings to Superman: The Movie (1978) and Supergirl are! Just as Marlon Brando monologued exposition for ages, here we have Zaltar (Peter O’Toole) giving his own info-dump to Kara. Whereas the simplicity of Superman is he’s the last of his kind but embraces his otherworldliness to help humanity, Supergirl’s own adventure is triggered by a MacGuffin (the “Omegahedron”) being lost when a magical butterfly launches it out a window into deep space. Yeah.

Supergirl exudes a vibe that comic-book movies wouldn’t appeal to female audiences of the mid-1980s, so a glittery aesthetic pervades the entire film. It’s by no means awful to look at, but the emphasis on being more fantasy than sci-fi allows screenwriter David Odell to rarely explain how and why anything is happening. 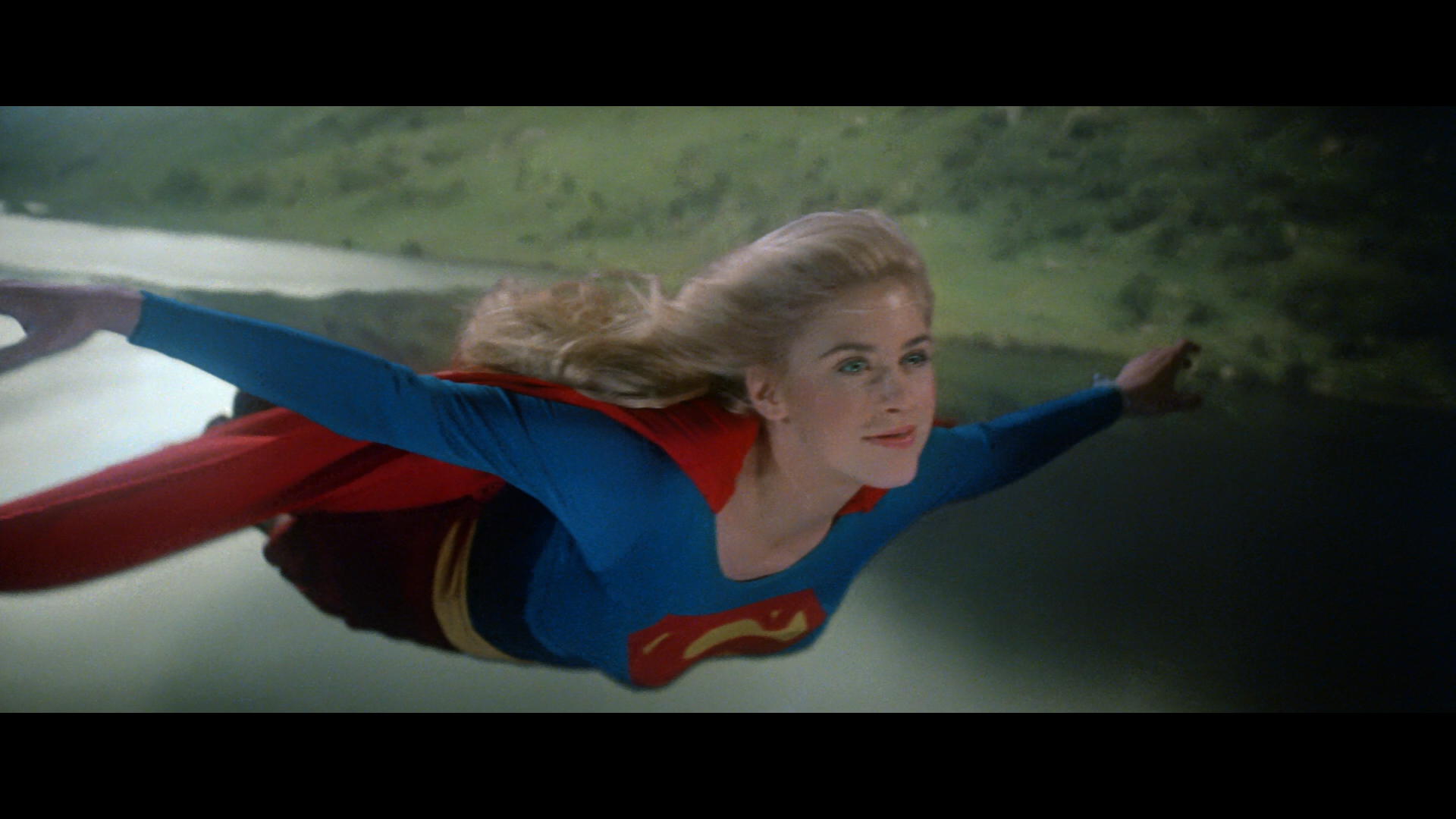 Just as casually as our heroine arrives on Earth, villainous Selena establishes herself by vocalising wistful ambitions to rule the world using black magic. When the Omegahedron lands gently on the tiger-skin rug of her lakeside picnic, she instinctively repeats poetry to indicate an immediate connection with the device. And what would Selena’s first dynamite demonstration of magical power be? She starts her car without using the key!

Kara soon arrives and conjures her own red-and-blue costume from nowhere, which I thought dumb until remembering Superman does much the same in his debut, too. The standout sequence where Kara learns to fly by performing a ballerina-like act through the trees is surprisingly charming and remarkably choreographed, however. It captures an appropriate mood of gentle wonder and positivity, and Helen Slater shines in her Supergirl guise, despite her only direction being to “make doe eyes” it seems. 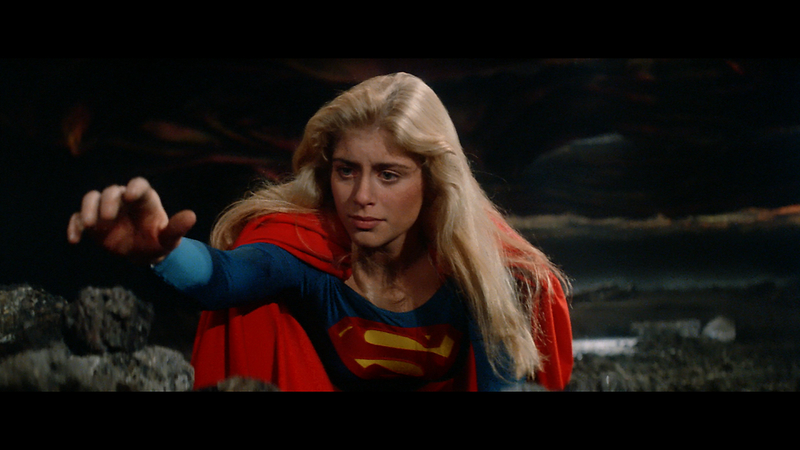 There’s no clear distinction between Kara and Linda Lee, unlike the nerdy and mild-mannered Clark Kent compares to his strong and inspirational alter-ego of Superman. This seems a pattern for all the cast, as veterans O’Toole and Dunaway, together with their younger co-stars Slater and Maureen Teefy, all deliver indifferent performances. While any lead actor deserves more, perhaps it’s telling that Slater only received $75,000 of the $35M budget, which was tipped more in favour of the visuals.

Having said that, the producers were on a bad track with directors. After dismissing Richard Donner from Superman II (1980), his replacement, who also directed Superman III, Richard Lester, declined to work on Supergirl. At Christopher Reeve’s own behest, they opted for TV director Jeannot Szwarc (Jaws 2). It’s odd that Reeve had such creative clout and yet chose not to appear in this spin-off, relegating his presence to a publicity photo Kara’s seen marvelling at.

Supergirl appears more made-for-TV than the epic cinematography found in Donner and Lester’s films. Even its action set-pieces feel arbitrary, while the cartoonish elements of later Superman films influence how Supergirl’s powers are portrayed: visible sound-waves are emitted from her ears for super-hearing, and heat-vision passes clean through walls to ruin college pranks. 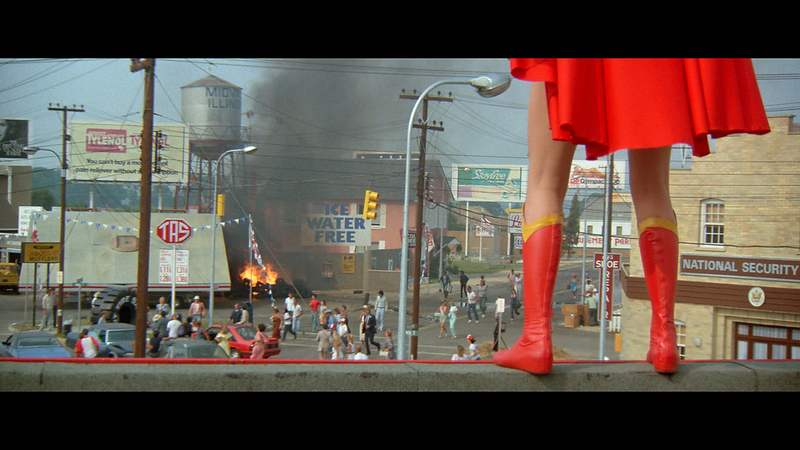 College is both a major and minor story component here, as it begs the question of why Kara is choosing to assimilate into human society at all. Her family and home are literally dying as she’s making friends at a local malt shop! If she’s waiting for the Omegahedron to make itself known, it may take some time as Selena becomes distracted by drugging the local hunk with a love potion as a step on the way to world domination! The narrative is a constant struggle between the storylines of those two characters, only modestly advancing the plot with incidental scenes that drag towards a conclusion.

When Selena’s drugged-up hunk escapes into town, the simple solution is to possess a construction digger and rampage through the streets with him trapped in the scoop. This action sequence only serves to waste the budget on smashing through building fronts and exploding cars—things that would be more exciting if they held any importance to the story being told. 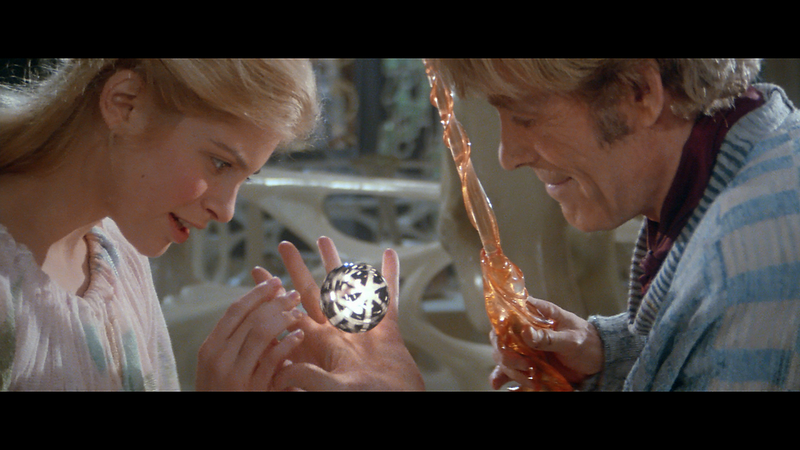 It would be remiss to not mention feminism in regards to Supergirl, but in doing that I’m going to talk more about the male characters. 1980s feminist films are a far cry from modern ones, as two super-powered women are ultimately fighting over the love of one random man neither of them really knows. Ethan (Hart Bochner) is in three scenes before getting any dialogue, one of which he’s shirtless in while working at an all-girls college. The love potion causes him to fall for Kara who he immediately kisses—a young woman dressed as a student, not Supergirl at this moment—and the stranger working at her college is declaring his love for her.

Now Superman is not without fault either. Let’s not forget when Lois Lane jumped from the Daily Planet building on a hunch that her workmate Clark is Superman. But while that’s silly, there’s an unfortunate dose of reality when Kara remarks “you’re so sweet but you’re out of your mind.”

With so little building towards a finale, Supergirl visits then escapes from the Phantom Zone to battle Selena—-who summons what can only be described as Satan. If that made you pause to question it then have no worries as the solution is equally random: Supergirl creates a tornado with her super-speed which sucks Satan and Selena into a mirror which may or may not be the Phantom Zone. With a hurried farewell as if she knew the film was almost over, Supergirl takes the Omegahedron and flies into the ocean. 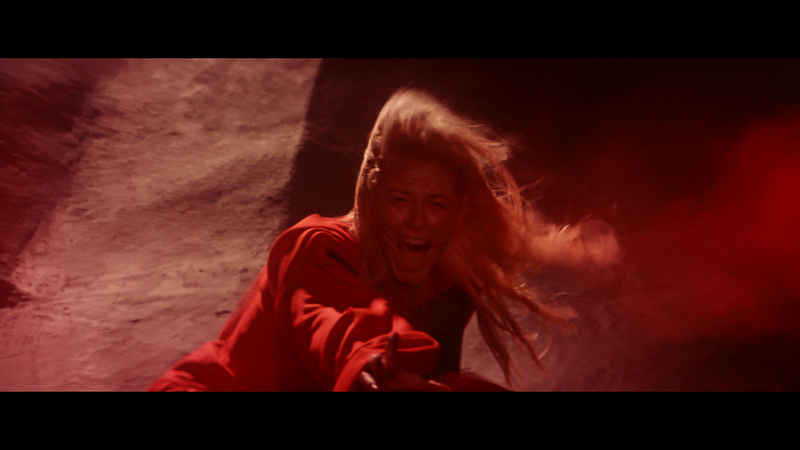 With recent talk of a ‘Snyder Cut’ of Justice League (2017), you may be wondering which version of Supergirl you’ve seen. There’s a 105-minute release, a 114-minute version, a 124-minute International Cut (which I saw for the purposes of this article), and even a 138-minute Director’s Cut. It seems the International Cut has become most people’s preferred edition, as The Director’s Cut hasn’t yet transitioned from DVD to later formats. I just wish I saw ABC’s svelte-sounding 92-minute TV version.

Supergirl didn’t soar to the same heights as her more-famous cousin with its theatrical release in ’84. The film was critically panned and bombed box-office, only clawing back half its budget.

As a final blow, though supposedly unrelated to this movie tanking, the comic-book Supergirl was killed off in 1985 and has only recently made a return. It’s difficult to separate a feminist analysis from a film review but it does seem unfair the Man of Steel got another chance to shine—with abysmal Superman IV: The Quest for Peace (1987)—while the Girl of Steel was brushed under the carpet and forgotten about. That’s until a 21st-century feminist movement encouraged The CW to revive the character for a Supergirl TV series with a modern approach that’s worked to rehabilitate the character’s name. 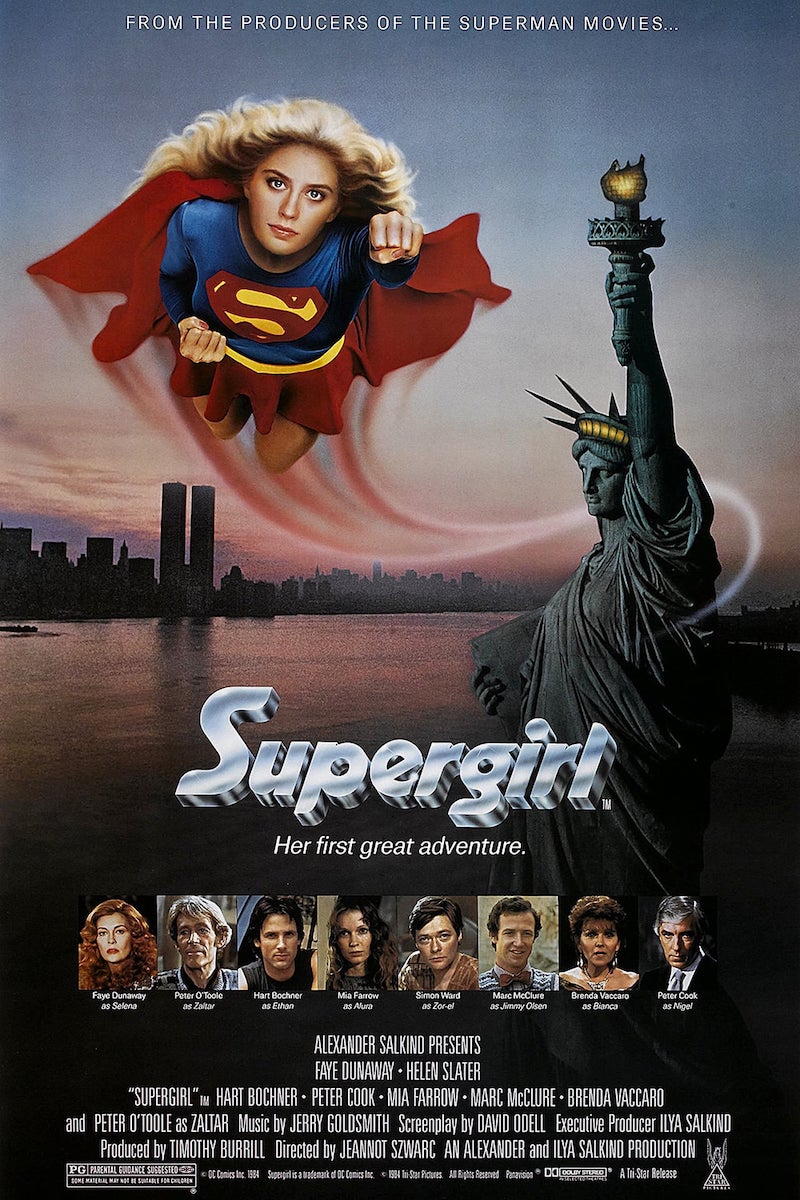 Written By
Devon Elson
More from Devon Elson
A young woman escapes a kidnapping by two serial killers and must...
Read More