Based on a long-running cartoon about a seven-year-old Latina girl who explores the world with a talking backpack and monkey, Dora and the Lost City of Gold is a live-action children’s adventure that updates the Nickelodeon favourite and makes its sillier elements work. I’ve heard of Dora the Explorer but I’m too old to have any childhood affection for it. And it never made the same pop-cultural impact of kid’s fare like Transformers, Teenage Mutant Ninja Turtles, or Mighty Morphin’ Power Rangers—perhaps because it’s aimed at younger kids and they grow beyond it too quickly?

A live-action movie has taken a long time to make a reality considering the show probably peaked in the mid-2000s, but there’s no better choice than to give this to James Bobin (Flight of the Conchords) to direct, as he breathed new life into The Muppets and graduated to big-budget filmmaking with Alice Through the Looking Glass (2016). The latter wasn’t well-received by audiences, which perhaps explains why he’s gone back to a mid-budget project like Dora, although it’s arguably riskier than any of his earlier films. The Muppets were already world-famous with a built-in audience and Through the Looking Glass was an eagerly-awaited sequel to one of the most successful movies ever made. Dora’s edutainment for the under-10s. 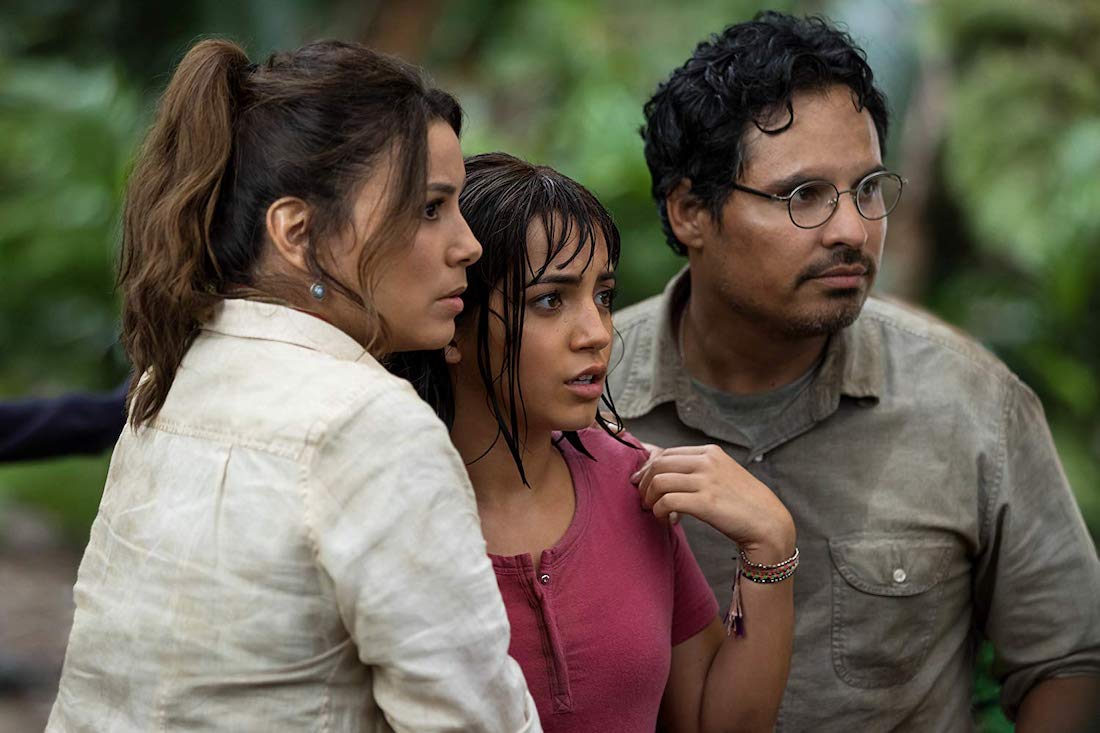 What’s instantly apparent with Dora and the Lost City of Gold is that Bobin’s fully aware of the cartoon’s trappings, so he delights in paying homage to them while crafting a new contemporary identity for Dora herself. The film even opens with a glimpse at what a live-action Dora the Explorer would look like in more faithful hands, with a six-year-old Dora (Madelyn Miranda) going on a jungle adventure with her boots-wearing monkey, her talking purple backpack, and loyal map with a human face. The cartoon’s recurring villain Swiper, an orange fox who steals things, even makes an appearance with full-on Looney Tunes antics. But it’s all revealed to be taking place in the imagination of Dora as she plays with her cousin Diego (Malachi Barton), close to her parent’s riverside home in the Peruvian jungle. In reality, life for everyone is relatively normal, although Dora’s monkey Boots (and Swiper when he returns) is kept looking more cartoonish than realistically simian.

The story truly begins after a ten-year time-jump away from the setup of the cartoon. Dora (Isabela Merced) is now a young teenager still living with her parents, Cole and Elena Márquez (Michael Peña, Eva Longoria), years after her cousin Diego left to be with his family in Los Angeles. But while a lot of time’s passed, isolation and a lack of interaction with kids her own age have caused Dora some arrested social development. She may be sweet 16 but she still has a child’s naivety and trust, so when her parents go on an expedition to find Parapata (the titular Lost City of Gold), Dora must swap the rainforest for the concrete jungle and join Diego in an American high school. 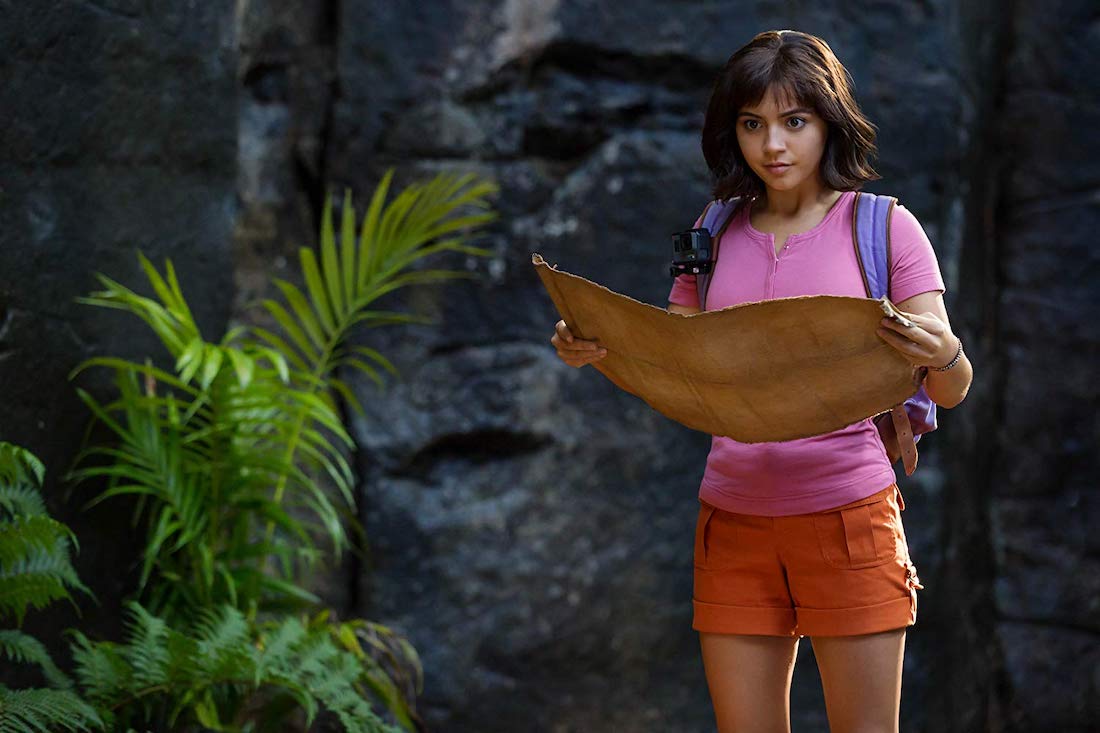 The Lost City of Gold is almost two movies for the price of one. There’s a more comedic fish-out-of-water part where Dora comes in the US, full of wide-eyed optimism, where she’s surprised to find Diego’s (Jeff Wahlberg) now embarrassed by how she behaves around his snarky friends. It’s here the movie evokes memories of The Brady Bunch Movie (1995), which also dropped “wholesome TV characters” into a harsher “real life” situation, but with a dose of Enchanted (2007) because Dora’s cartoonish personality clashes with such a cynical foreign culture. I’d have liked the movie to stay in this ‘stranger in a strange land’ mode for longer, actually — as it’s by far the more amusing portion of the movie, seeing someone so goodhearted mixing with “mean girls” and navigating all the high school cliches and rituals. Even a fellow environmental activist, class swot Sammy (Madeleine Madden), isn’t pleased Dora’s more intelligent than her.

However, the film soon switches from high school comedy to action-adventure with unavoidable Indiana-Jones-for-children overtones. On a field trip to a museum, Dora, Diego, Sammy, and a geek called Randy (Nicholas Coombe) are taken prisoner by mercenaries who whisk them to Peru, intent on using Dora to find her missing parents and Parapata. But a mysterious man called Alejandro Gutierrez (Eugenio Derbez) helps them escape and vows to help Dora find her parents as he leads the kids on an adventure towards the fabled Lost City. And along the way, there are all the expected traps and obstacles to avoid or solve, involving deadly quicksand, Inca puzzles, hallucinogenic plants, wide ravines, and spear-throwing warriors. 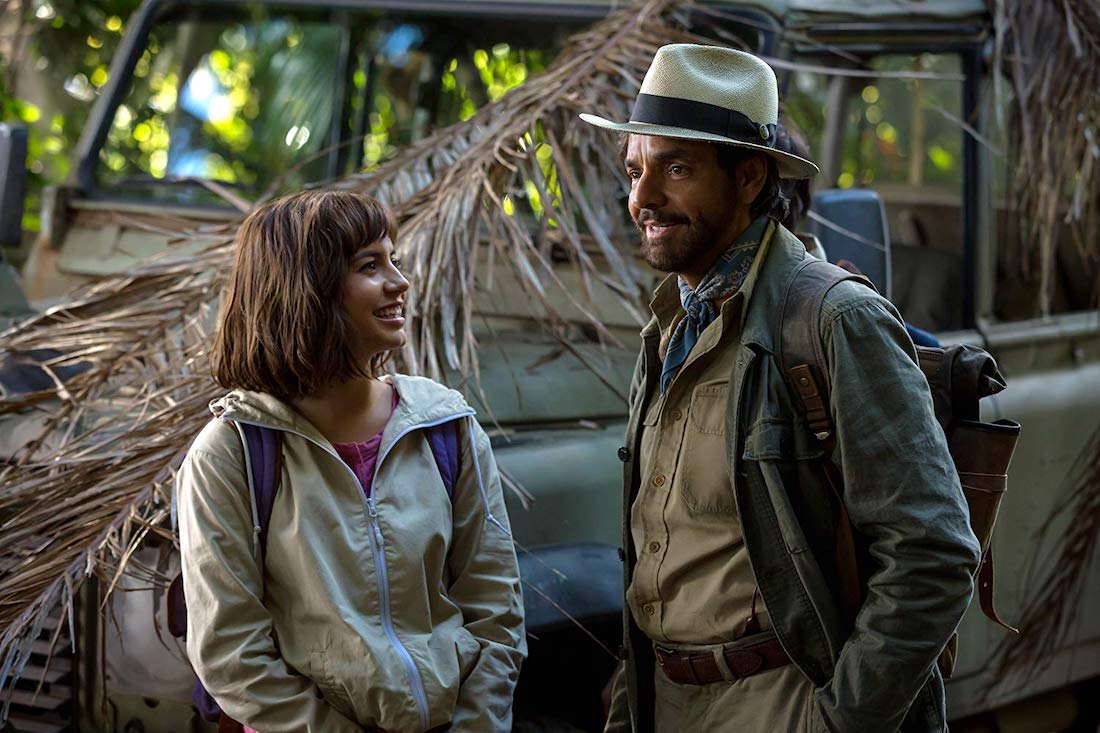 This is a delightful movie for kids or the young-at-heart, even if Dora the Explorer isn’t a cultural touchstone for you. Bobin ensures it works as is own entity, despite being crammed with self-aware humour and nods to the cartoon’s origins and animated style. It never alienates Dora newbies, even if there are one or two things only Dora fans will find amusing and worthwhile. The antics of thieving fox Swiper, for instance, felt unnecessary and comedically flat to me, but I’m sure he works better if you’re familiar with his role in the cartoon. 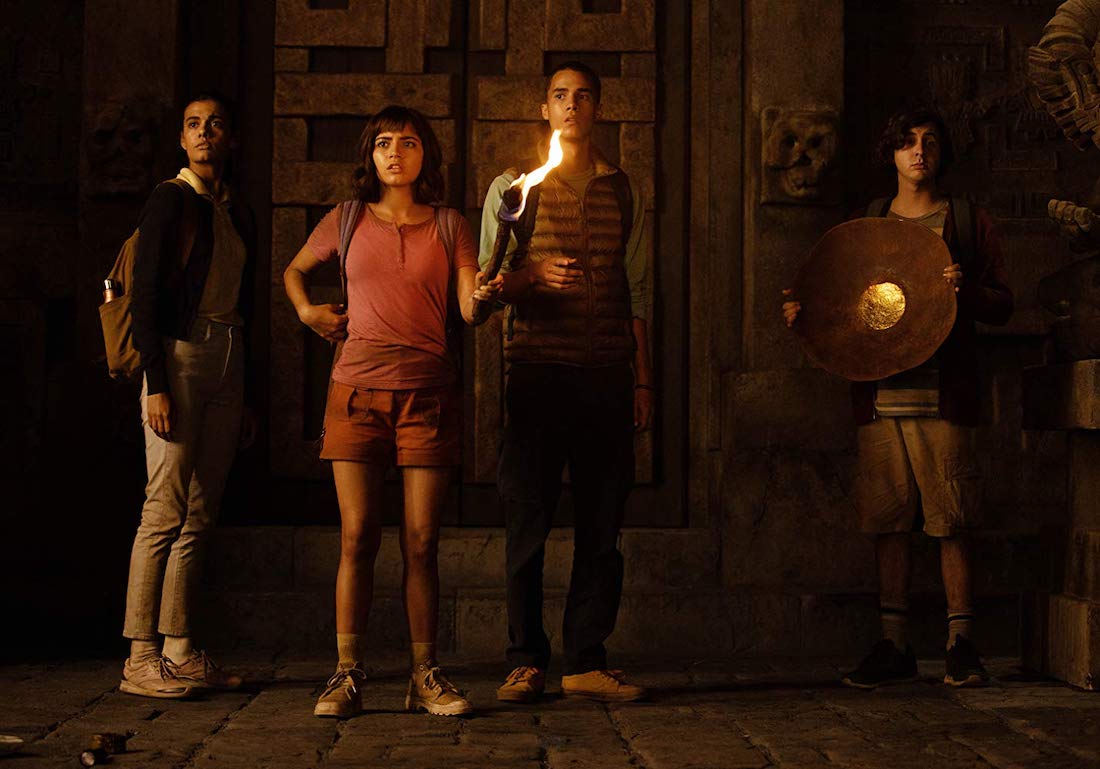 But everyone can grasp the core idea of a young girl struggling in an urban society she doesn’t understand, facing ridicule because her peers don’t accept her for who she is. And then the tables are turned when she’s back on home turf, leading her city friends through dangerous jungle environments, where her survivalist skills and chipper attitude are exactly what’s needed to survive. There’s even a fun Scooby-Doo vibe at times, perhaps because the lead characters transfer across surprisingly well: Dora’s Velma, Diego’s Fred, Sammy’s Daphne, Randy’s Shaggy, and Boots is Scooby? It sort of works. 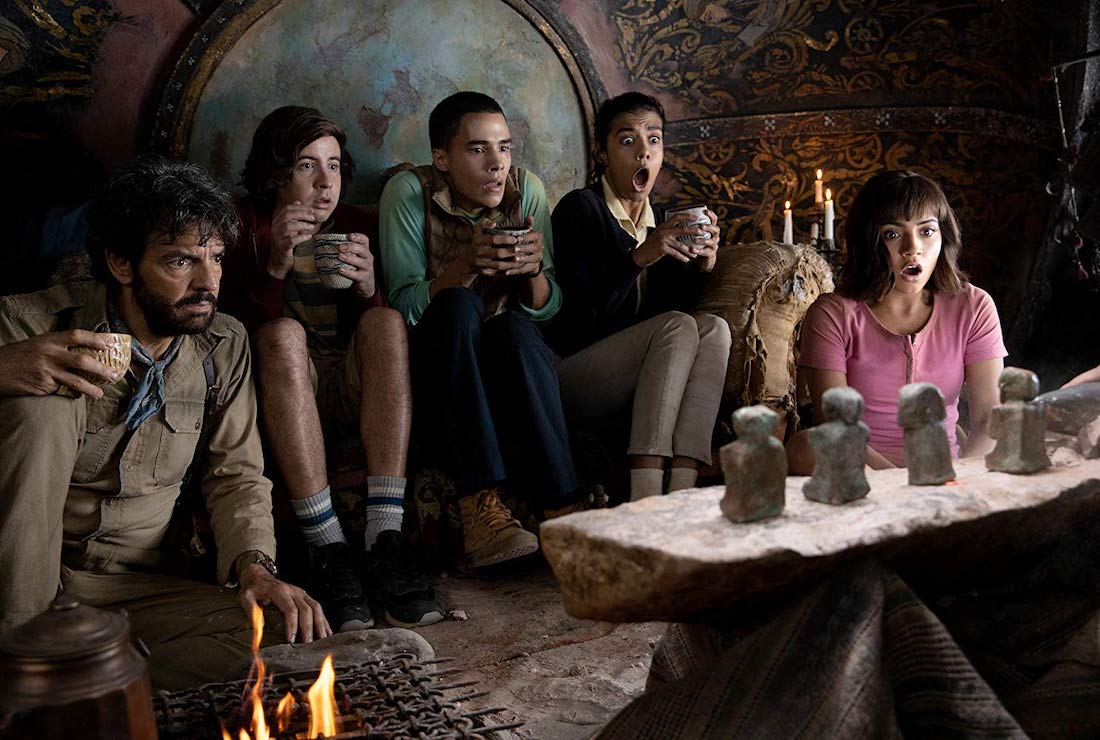 Adults will be fully aware of how much is owed to the Indiana Jones franchise, or the Tomb Raider video games, as so many of its set-pieces are variations on scenarios we’ve seen before. (There’s even a version of Indy’s famous animatic of a plane flying across a globe.) One moment in the climax lifts a twist from Indiana Jones and the Last Crusade (1989), but that’s not exactly a complaint. There’s enjoyment in seeing familiar traps and dangers for grown-ups in the audience, while the film’s target demographic of younger kids will find such things fresh and invigorating. It’s easy to forget that stuff adults take for granted or perceive as hoary old cliches, always need to be reintroduced into the culture to stay relevant for the next generation. And here aren’t too many movies doing child-friendly Indiana Jones riffs—except maybe Jumanji: Welcome to the Jungle (2017), which is pitched at slightly older kids.

One notable thing The Lost City of Gold has is a talented and mostly non-white cast. The majority of faces onscreen are of Latino descent, which I can’t remember seeing since in a mainstream cinema release since the Spy Kids franchise almost 20-years ago. Nicholas Coombe is the only white actor of note, so that stood out as being unusual in a big Hollywood release like this. 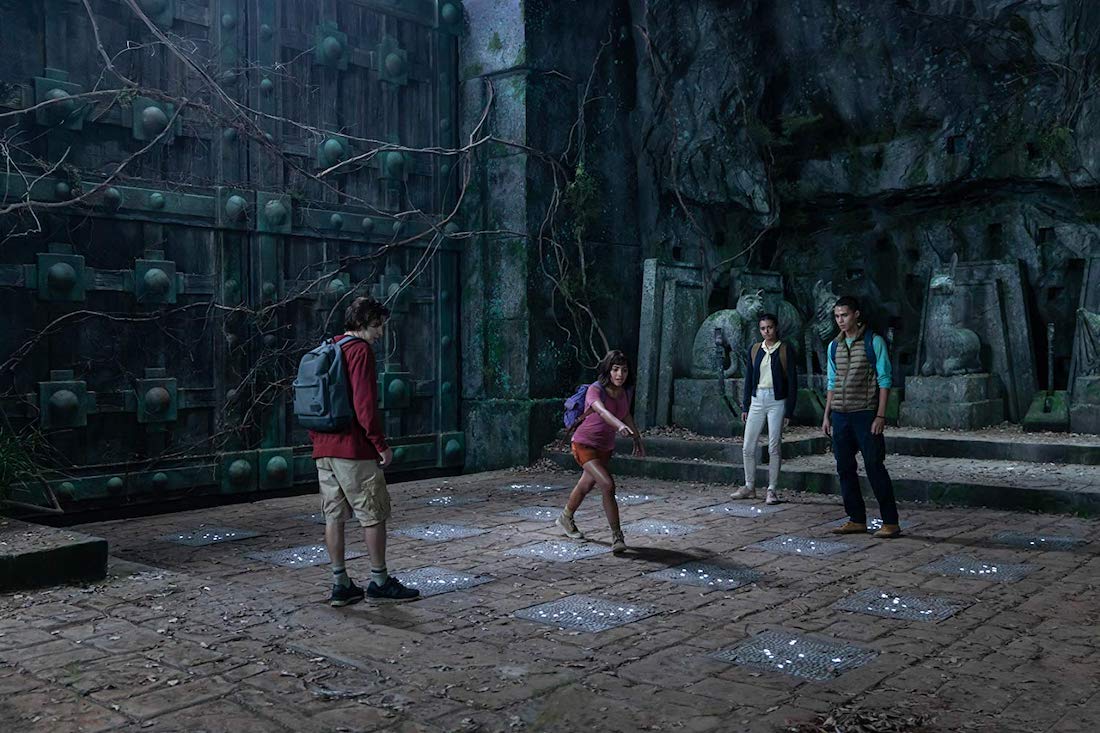 The clear standout performance is Isabela Merced (nee Moner) as Dora, who proves to be a joyous screen presence with an abundance of cheerful charisma that makes her easy to watch. It’s interesting to note that Merced was once a voice on Dora and Friends: Into the City between 2014–17 (playing Dora’s friend Kate), which was a sequel to the original cartoon that moved the story on a few years and relocated Dora to urban Californian. Dora’s emigration is partly the impetus behind this film’s storyline, only now Merced gets to play the title role on camera. That’s quite a promotion! The other kids are reliable and fun to watch, but it’s the supporting adults that stick in the memory, with Eugenio Derbez having a great time as an adult adventurer who’s actually an incompetent wuss. Michael Peña and Eva Longoria are also entertaining as Dora’s loving parents, with Peña getting a few choice moments to overact and make silly faces and noises (the best moment being his beatboxed interpretation of modern music when warning his daughter about “ravers”).

The one element missing from Dora and the Lost City of Gold is a great villain who challenges Dora and forces her to grow as a person, as there’s no clear antagonist. And any enemies Dora’s friends encounter are dealt with too easily. This lack of sustained menace means there’s never enough threat or sense of danger, which would’ve been appreciated and helped keep the interest of teenagers who’ll likely view this movie as a fun distraction intended for younger kids. And it’s hard to disagree because the material does seem pitched at eight-year-olds, rather than kids Dora’s age who are in high school themselves. 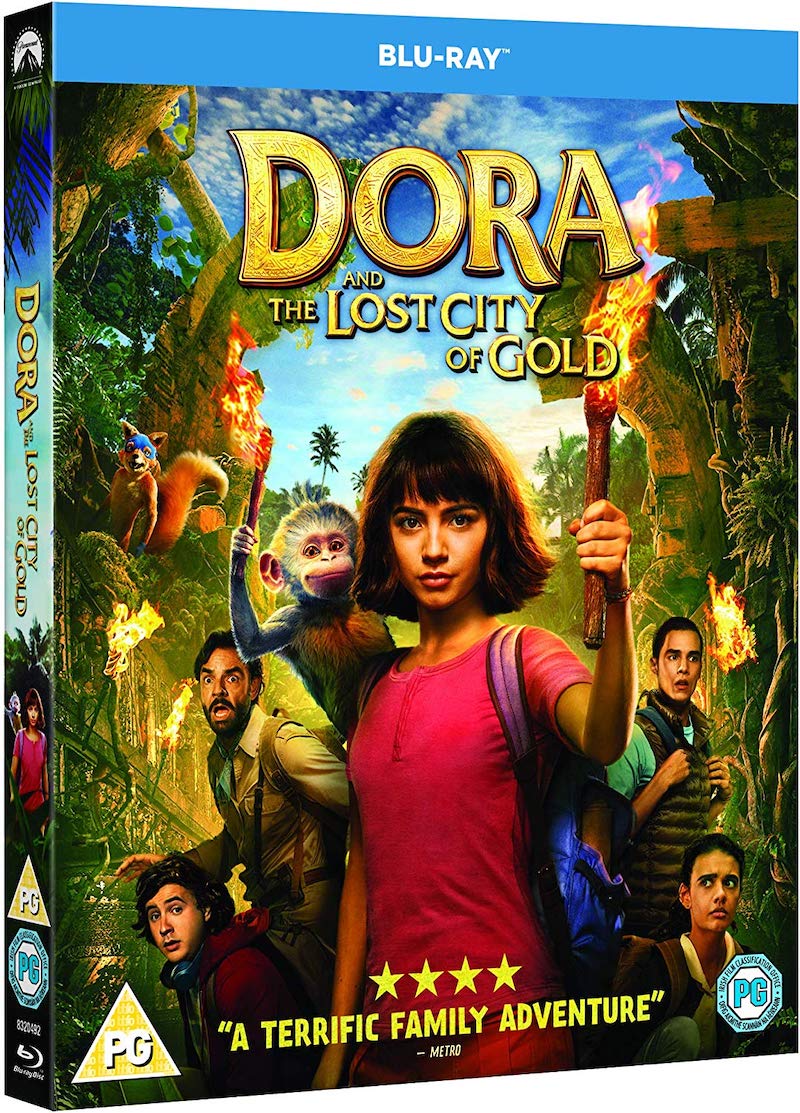 James Bobin shot Dora and the Lost City of Gold on a number of Arri Alexa digital cameras (the LF, the Mini, and the SXT) in 1.85:1 aspect ratio. The 1080p Blu-ray does a wonderful job of transferring this for home audiences, with a rich and vibrant picture full of gorgeous colours. As it takes place mostly in the jungle, there’s plenty of opportunities to gawp at vivid greens, bright foliage, dirty trails, clear skies, and gloomy caves. The blacks could have been a touch darker, as the movie tends to favour brightness, but details are always clear and the CGI animals look good (if intentionally cartoonish and thus clearly fake).

Dolby Atmos is available on this disc, too, which naturally comes to life more in the jungle scenes because of the ambient noises and wildlife sounds. Although one of the most believable overhead effects was the simple ringing of a high school bell, which genuinely felt like it was directly above my head. The soundtrack works nicely across all speakers, never overbearing or too loud. It just gives a pleasing boost to the crisp Dolby TrueHD 7.1 track you’ll otherwise hear.