Rachel Bloom has a star-making role in Crazy Ex-Girlfriend, playing Rebecca Bunch, the eponymous ex of questionable sanity. A Yale and Harvard educated lawyer with a glistening city career ahead of her, Rebecca drops everything when a chance reunion with her childhood sweetheart, Josh Chan (Vincent Rodriguez III), rekindles emotions powerful enough to send her jetting to California to win back the heart of her teenage beau.

Co-created by Bloom herself (a writer for Robot Chicken) and Aline Brosh McKenna (The Devil Wears Prada), this rom-com musical started life as a half-hour pilot commissioned by Showtime, directed by (500) Days of Summer’s Marc Webb. Unfortunately, the cable channel got cold feet over the pilot’s tone, meaning The CW swooped and repackaged the show as a softer-focused hourlong. However, it’s notable how the pilot is one of this season’s better hours—both in terms of Webb’s inventive direction and for containing two of the year’s best songs. 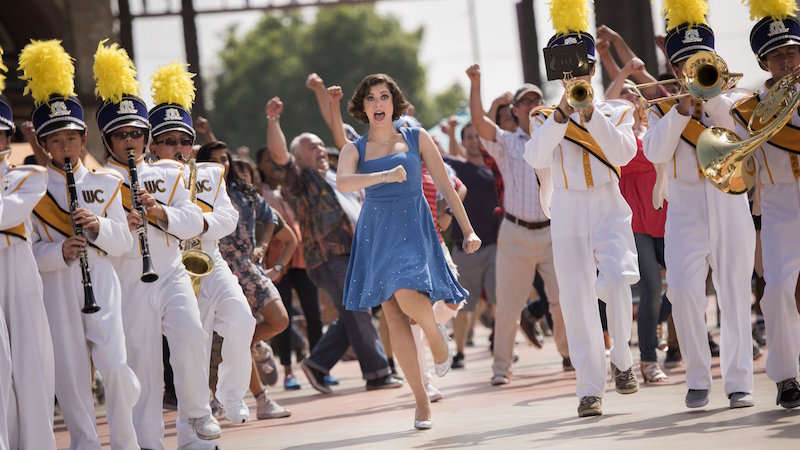 Indeed, Crazy Ex-Girlfriend suffers from a problem Flight of the Conchords wrestled with in its second season: writing and producing original songs every episode is a huge added burden, and you sometimes wonder if it’s worth the bother in Crazy Ex’s case. Rebecca mentions imagining her life to be a musical, to loosely explain why scenes often snap into song-and-dance routines. It emphasises how overdramatic Rebecca is, too, but is otherwise an unnecessary addition. That said, Bloom obviously has a talent for singing parody songs (she rose to online popularity thanks to viral YouTube hit “Fuck Me, Ray Bradbury” in 2010), so I can see why she’s woven tunes into this show’s fabric. They’re just never as clever or funny as they really need to be to justify their inclusion, for me—but opinions will naturally vary. A few of them are catchy and choreographed well, but they’re a low hit rate in terms of LOLs. And for a comedy musical, it’s mind-boggling this show has one of the worst ever opening titles and theme songs—an irritating headache with Bloom inserted into a garish cartoon to explain the show’s premise.

Another issue with the show is its struggle to flesh out what seems to be a ruthlessly narrow concept. The silly but specific title puts a constraint on what Crazy Ex is about, although admittedly there’s precedent for other shows transcending bad titles (Desperate Housewives, Cougar Town, Trophy Wife), so we’ll have to see if this proves true for Crazy Ex-Girlfriend. Or if they’re regret not calling it Thanks a Bunch!, or something. 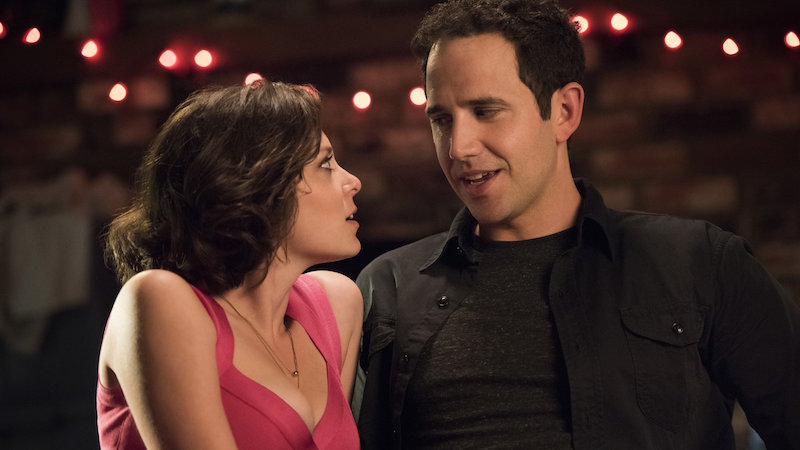 To elaborate on the setup more: arriving in sunny West Covina, Rebecca gets a mediocre job at a local law firm run by clueless Darryl Whitefeather (Pete Gardner), befriends an obsessive co-worker called Paula (Donna Lynne Champlin), then sets her sights on snaring her beloved Josh once again—forever this time. Complications ensue, of course, as Josh is already in a very long-term relationship with gorgeous Mexican yoga instructor Valencia (Gabrielle Ruiz), and Rebecca’s oblivious to the possibility she’s a better love match for sarcastic Italian barman Greg (Santino Fontana).

Once those pieces are moved into position by the end of the pilot, Crazy Ex takes a long time to even contemplate moving beyond them, which has the unfortunate effect of making its mid-season feel repetitive. Most episodes involve Rebecca doing foolish things to try and woo Josh away from his hottie girlfriend (who gets suspicious of her boyfriend’s childhood sweetheart), with the help of the scheming Paula—who latches onto Rebecca’s relationship goal as a distraction from her lifeless marriage. 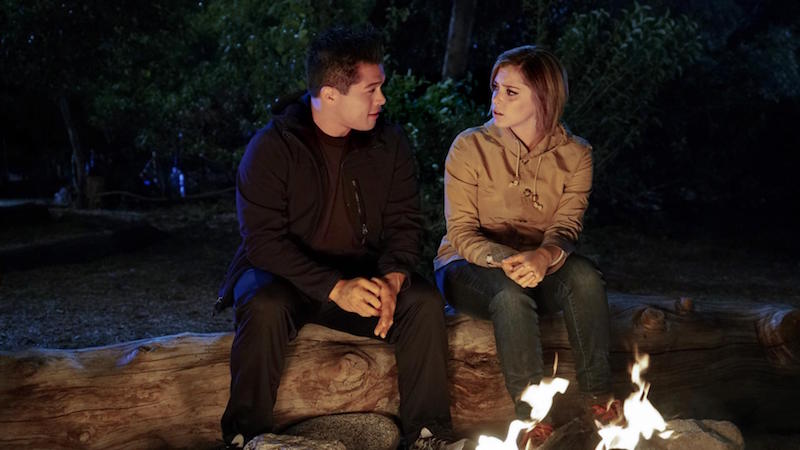 Luckily, some development does begin to take place slightly later in the season—around episode 9’s “I’m Going to the Beach with Josh and His Friends!”—when more effort is made to flesh out the characters circling Rebecca. Darryl starts to realise he’s bisexual and attracted to Josh’s buddy ‘White Josh’ (David Hull); Paula’s failing marriage gets some overdue focus; Valencia and Josh both gain much-needed nuance as the other two points of the show’s love triangle; Greg starts dating Rebecca’s chilled out student neighbour Heather (Vella Lovell); Rebecca’s profession becomes a motivating factor in a big storyline; and in general the writers realised they had to start creating a more balanced ensemble, so the cast aren’t a bunch of one-note caricatures for Rebecca to bounce off.

Crazy Ex Girlfriend season 1 has a better ‘back nine’, although things still follow a path everyone could have predicted from the very first instalment, suggesting this is very much a movie stretched across 18 hours. I just don’t see it lasting for much longer than a few seasons, but, for now, Crazy Ex has the benefit of newness and has a cast of mostly unknown and likeable actors to watch. As I said, Bloom benefits the most from this show as its scarily motivated lead, deservedly winning a Golden Globe for her breakthrough performance. She’s incredibly watchable, very charming, and quite often gives a performance that pulls you through the weakest of episodes. The other actors aren’t bad, although everyone’s a few rungs below Bloom. Or what the show currently allows them to become. 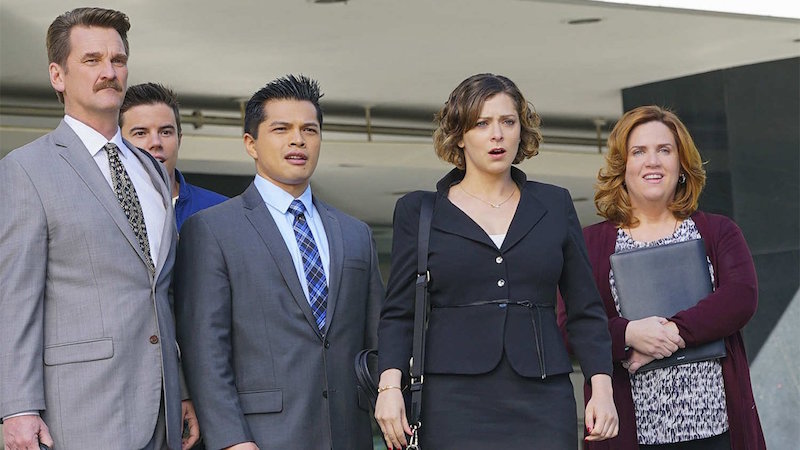 I just hope season 2 learns a few lessons from a similarly quirky show: Netflix’s Unbreakable Kimmy Schmidt. It likewise has an oddball female lead, but does a better job giving other characters equally appealing roles and quirks to play. That’s not quite true of Crazy Ex, although I certainly grew to enjoy what sidekick Paula and sneering Valencia could bring to the table. More seriously, Crazy Ex has to get much funnier. There are good lines and jokes here, but like a lot of US comedies they evaporate from memory as the credits roll. Ditto the songs, with only a few notable exceptions (I still find myself humming early hit “Sexy Getting Ready Song“), so I’d prefer they scale back on the songs—just one per episode?—rather than throw many forgettable tunes at us. It’s also a shame the show can’t be as dark as it was presumably supposed to be on Showtime, although Bloom uploads an explicit version of some songs to her YouTube channel.

In summation, I binge-watched Crazy Ex-Girlfriend and that strikes me that’s a good way to watch. I have a feeling it would’ve seemed too slow-moving as a weekly viewing, and there were multi-episode runs where I was beginning to lose faith in it—runs that would have lasted a month or so, but on Netflix could be seen as an ‘afternoon blip’. Still, this is also one of those shows that definitely improved and entertained me throughout, but has a concept that gives me pause about its long-term future. Having seen the tell-tale final moment from this year’s finale, I think I see where season 2’s going to take us… but season 3 and beyond gets a whole lot murkier.