Rock biopics are typically concerned with mapping a trajectory. They’re made with the intention of converting the magical ephemera of rock stardom into a digestible, linear story. It can be tucked neatly away when the audience is done with it. In many ways, Hedwig and the Angry Inch is an implosion of this very idea. It’s a wild and furious deconstruction of what a rock star even is. It’s epic in scope, closer to a mythical creation story than to a rote telling of facts. And that’s not to mention how it isn’t even based on a real person.

Adapted from John Cameron Mitchell’s namesake stage musical, the story is told through songs and monologues. Gender-fluid aspiring rock star Hedwig Robinson (writer-director John Cameron Mitchell) tells the epic story of her life; from haunted childhood in the rubble of post-war Berlin (when she was known as Hansel) to her unfulfilling new life in the US. Along the way are tales of botched surgeries, betrayals, and a search for identity. 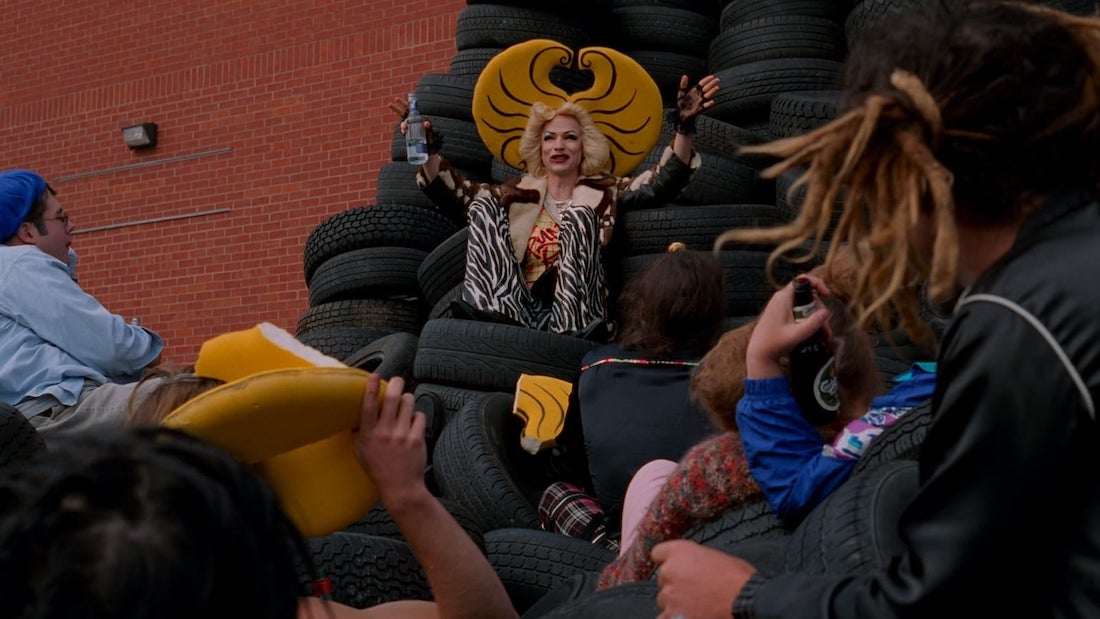 Each chapter and song is told with vitality and truthfulness. During the Country-tinged number “Sugar Daddy”, Hedwig thrusts her crotch in the face of a disinterested patron of a lobster restaurant. Contrarily, “Wicked Little Town” finds her gazing sorrowfully down the avenues of time, her drawn-on eyebrows a gesture of constant heartache. Seemingly incompatible, these performances are linked by a tender pain that pulsates from Hedwig, aching whenever touched. The duality that exists within her—the fury and softness—is emblematic of the film’s most exciting choice: to be multiple things at once.

The music and lyrics, written by Stephen Trask, are wildly diverse and potentially conflicting. However, much like Hedwig’s duality, there’s cohesion to everything and it’s anchored by earnest emotion. If the unique blend of musical styles creates a heady cocktail, then surely the song “Angry Inch” is the Molotov to that cocktail. To live in the US, Hedwig had to marry an American G.I—but to marry him, she was required to have reassignment surgery. This was duly botched, leaving her with a self-described ‘angry inch’. 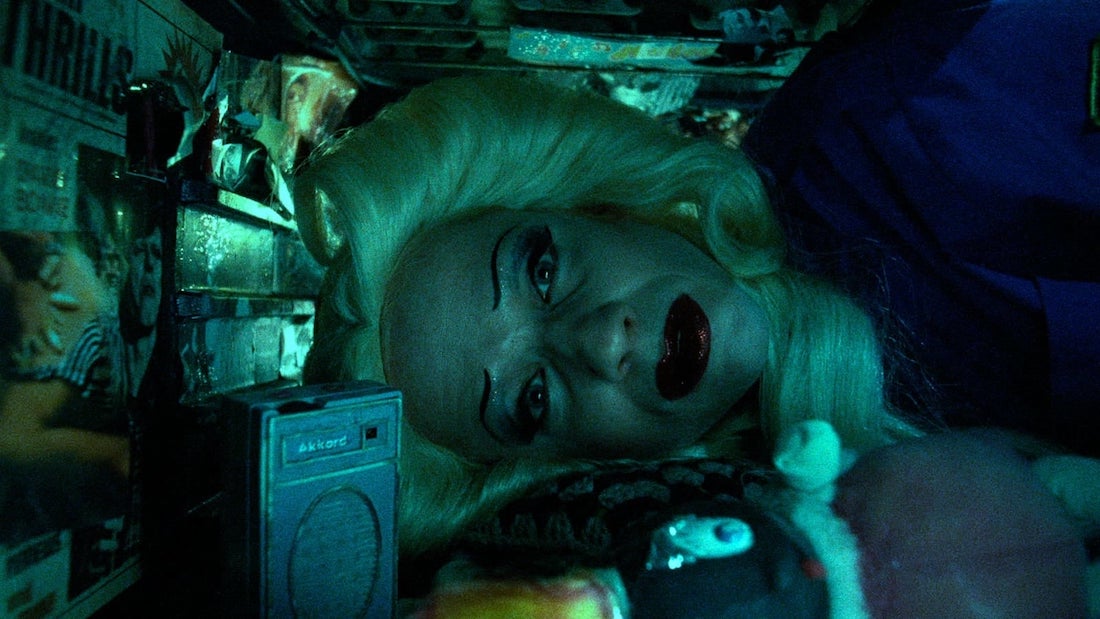 The song, a self-accepting blast of punk rock fury retelling this story, radiates from Hedwig’s rawest quarters. It’s a Queer Punk anthem that breaks a bottle over the head of intolerance. It’s a story of sacrifices and of pride, of baring scars and confronting anyone who takes issue with them. There’s a reason Hedwig is introduced on stage with the phrase “whether you like it or not”. You can turn away from what she has to say, but she’s going to make you listen. “Deny me and be doomed”, we see handwritten across the pages of her journal.

After the fire is a tenderness—or perhaps both exist at once. “The Origin of Love” is Hedwig’s version of a creation story, specifically an adaptation of Plato’s Symposium. It’s a sprawling tale of gender, rebirth and love, a gently building rock odyssey, sung romantically and perhaps even wistfully by Hedwig. In golden-tinged closeups, she looks like a forlorn movie starlet, before charming hand-drawn animations visualise her words. Hedwig is righteously angry, but she’s also infatuated with the complexity that has led to her becoming who she is. Each of us has a beginning, and Hedwig considers that in epic terms, from Plato back to the Big Bang. Molecules that would eventually become humans existed long before we were born. She’s obsessed with the journey because she’s trying to process it. It’s here that we’re granted a view of her most vulnerable side. 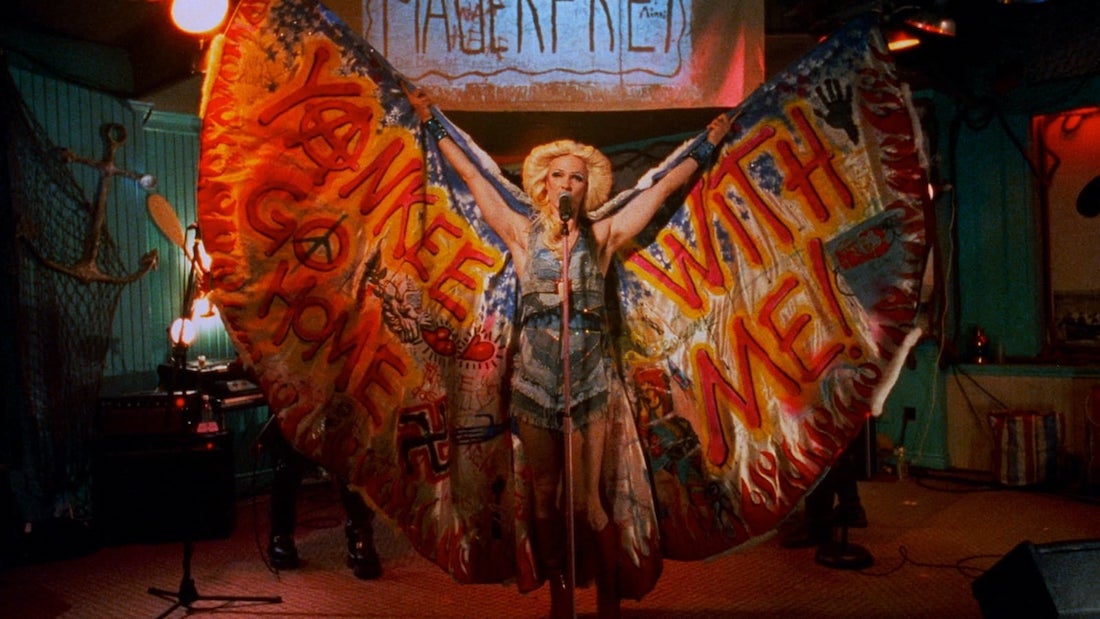 So Hedwig is tender and vulnerable and furious. She is Hedwig… was Hansel… and perhaps is Tommy too. Tommy (Michael Pitt) is a young Christian, questioning his upbringing under a strict military father (this also describes Mitchell’s real childhood). One day, he sees a Hedwig performance at a local Deli. Soon, the two are embroiled in a relationship, with Hedwig teaching Tommy the history of rock and roll. “His bands were new to me. Boston, Kansas, America, Europe, Asia. Travel exhausts me”, Hedwig quips. They write songs together, and Hedwig is even responsible for Tommy’s construction: she gives him the stage name of Tommy Gnosis. But Tommy runs out on her after feeling her ‘inch’. He then begins a successful music career, co-opting everything Hedwig had taught him and recycling the songs she’d written.

“What are you afraid of, huh?” Hedwig cries at Tommy before he runs out. “Love the front of me”. It’s a painful sequence, a desperate, angry and wounded one. Tommy will go on to have success stealing the intensely personal music of Hedwig, and he’ll pose emptily on stadium stages. He won’t mean a word of it, while every tear welling in Hedwig’s eye, in every run-down restaurant, will be real. Tommy hypocritically refuses to accept her whilst also exploiting her talents. 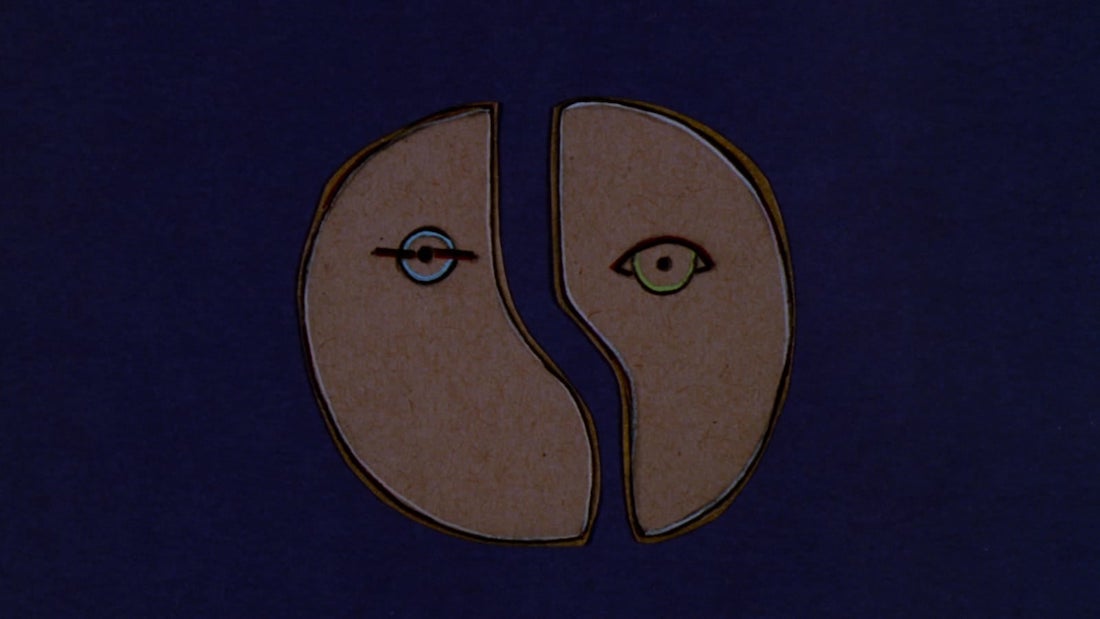 The film appears to pose the theory that we are all creations, that we are all a combination of specific experiences and performances—but that does not make us any less real. What does make us less authentic is when the experiences aren’t ours. In this sense, Tommy is a purely false creation, his thoughts, words and image entirely created by Hedwig. She is the real Tommy.

Hedwig is a film as challenging as it is fun, forcing us to consider not only the makings of our own identities but to whom art belongs. Are the songs now Tommy’s or will they always be Hedwig’s? Tommy misinterprets Hedwig’s lyrics and sings ‘Oh, Cyrus’ instead of ‘Osiris’. As a gesture, he writes her name on the writing credits on the back of his CD. But he is the one on MTV and filling arenas, while Hedwig is left on the outside looking in, shadowing his tour with her band.

Meanwhile, The Angry Inch’s guitarist, Yitzhak (Miriam Shor), is another hurting character aching to be validated. His microphone is cut off and he is sung over by Hedwig, who ignores and scorns him. In a false beard with a bandana and biker jacket, Miriam Shor is playing a man desperate to be free from the shackles of gender normativity. He wants to sing in a high register, and possess the confident freedom of Hedwig. Perhaps Yitzhak is Hedwig—the stifled part that took the backseat when she left Berlin. Perhaps, the film seems to say, there are old parts of us that don’t fully go away but instead make up the complex person we are now. 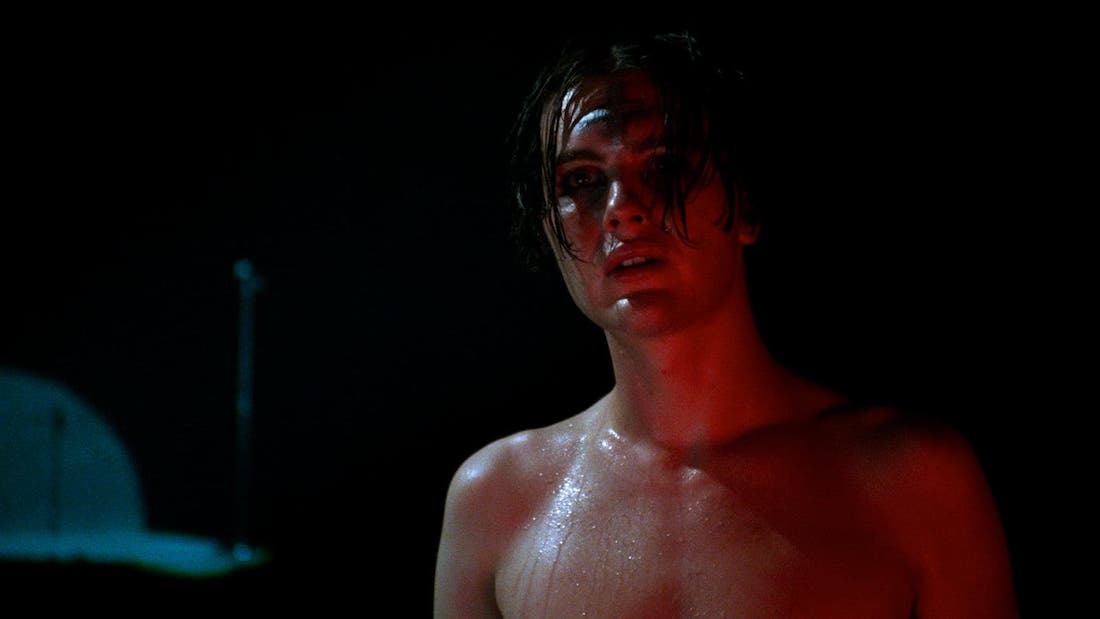 At one point, Hedwig takes off her wig and gives it to Yitzhak to wear. He now looks like Hedwig and dives euphorically into the arms of the crowd. Hedwig, with a cross painted on his forehead, now adopts Tommy’s look. Like the cartoons that we see blending and morphing into globule shapes, so too is Hedwig morphing and fusing with those around her, as if she were made from clay. She is a composite of different people, as perhaps we all are—and there’s something quite communal about that.

What’s truly wonderful about Hedwig and the Angry Inch is that it feels like a dialogue. At some points, it’s between Hedwig and her audience. Other times, it’s Hedwig and Hedwig. Occasionally, it’s John Cameron Mitchell and Hedwig. What makes it such a deeply sympathetic film is that it is placed unapologetically in the tumult of human messiness. There have been endless films about LGBTQ+ characters that tackle how lonely of an experience it can be. But Hedwig isn’t a lonely film—it’s a celebratory one. It’s a party for the contradictions, for the chaos, for the pride of being a person made of so many different components that are always changing, like notes in a song. 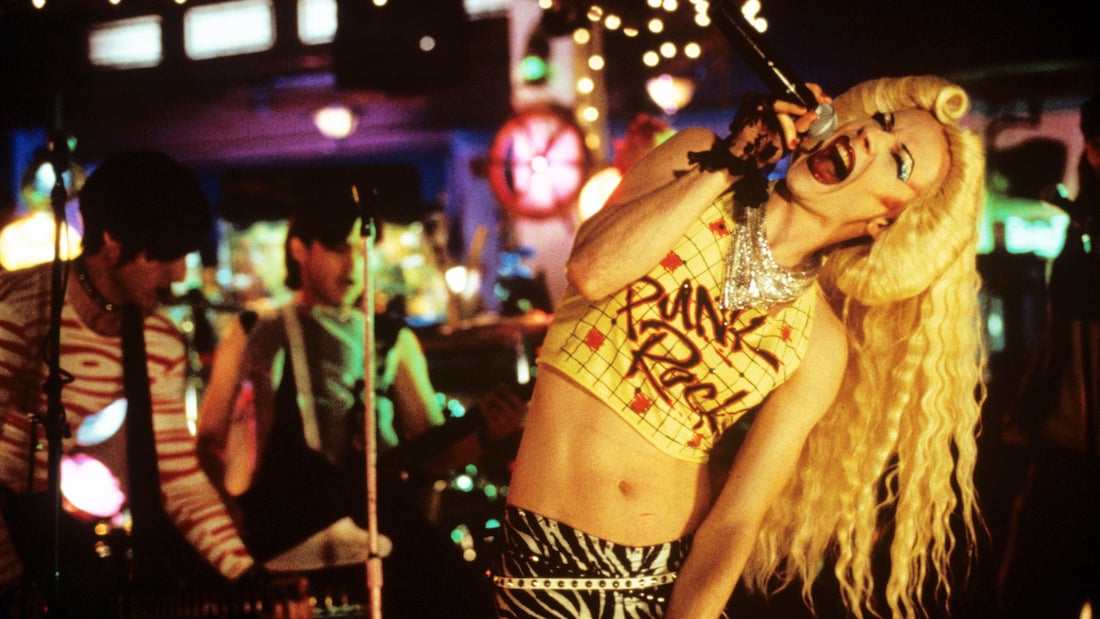 A good musical makes you understand why the characters are singing. There is so much internal conflict, such an overspilling of emotion, that all they can do is break into song and release it. But a great musical also creates a deeper understanding: it’s not that these characters are performing songs, it’s that their lives are a song. Hedwig was born to perform it, to fulfil who she was supposed to be. So we get moments of gorgeously choreographed brilliance. A trailer park’s wall collapses and becomes a lightbulb-strewn stage for the band. A few garments of underwear hanging from a ceiling become a forest of clothes for Hedwig and Tommy to float through in a romantic embrace. A camera slowly rotates 360 degrees on Hedwig’s head as she lies in an oven, listening to “Walk on the Wild Side”, her world turned upside down and back again.

As a directorial debut, it is stunning—a bolt of lightning shot out of the sky and straight into Hedwig’s microphone. There aren’t many films like it. There have been many comparisons to The Rocky Horror Picture Show (1975), but those are minor. It shares some DNA with the underrated Velvet Goldmine (1998) but this is the more radical of the two. It’s clear that Hedwig is its own film, and that Hedwig herself is unlike any character before her. She’s not real, but she may as well be—her film has far more truth in it than any real rock biopic. Deny her and be doomed. 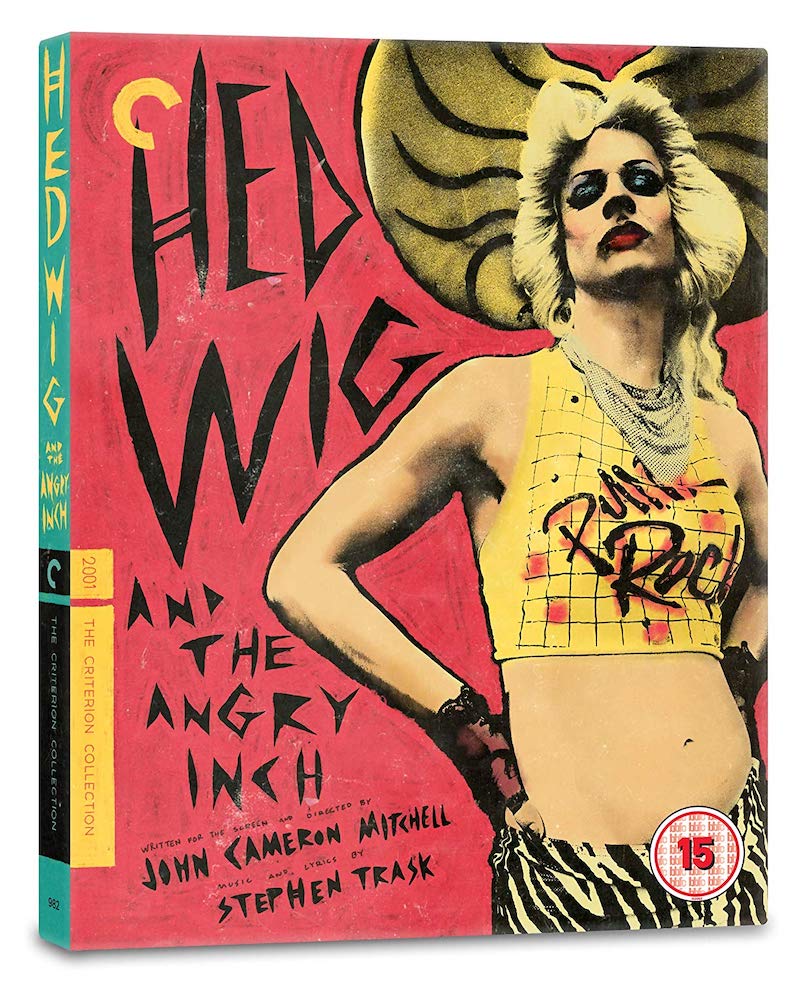