Having invigorated sci-fi action with 1999’s The Matrix, Andy and Lana Wachowski have struggled to match their cyberpunk sensation. Two inferior sequels followed in 2003, then a trio of expensive failures in subsequent years (Speed Racer, Cloud Atlas, Jupiter Ascending). The directors’ move to Netflix may have felt unimaginable a few years ago, but is video-on-demand the best place for their ambitions to find discipline?

Like most of the Wachowskis previous work, Sense8 touches on issues of interconnectedness, spiritualism, identity, prejudice, sexuality, and evolution. It’s worth mentioning Babylon 5‘s J. Michael Straczynski is this show’s co-creator, so maybe he prevented the Wachowskis concept getting tangled in metaphysical knots—although style over substance remains a fair criticism. Sense8 has an imaginative concept, echoing aspects of the Wachowskis maligned Cloud Atlas (where people’s life choices echoed through reincarnation), but the execution is where problems arise.

We’re introduced to eight strangers scattered across the globe, who realise they’re telepathically linked. These cognitive bridges enable the “Sensates” to share sights, sounds, smells, and emotions, while also allowing their consciousness to jump into each other’s bodies. This proves handy when one of their “cluster” is threatened and needs helping shooting gunmen, escaping suffocation, or picking handcuffs to flee a hospital. Or, less impressively, when an actor’s talent for lying means he’s best-equipped to handle an armed gangster, or when a pharmacist’s needed to create a homemade bomb from cleaning products. 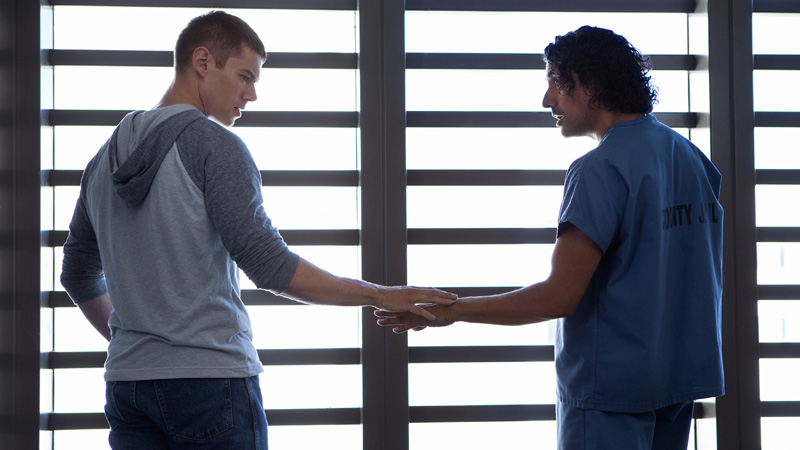 I vaguely recognised some of Sense8′s actors, but it’s safe to say they’ll be unfamiliar to most viewers, which means less preconceptions getting in the way. Casting unfamiliar people also paid dividends with Lost a decade ago (a show Sense8 shares DNA with, including actor Naveen Andrews as its “Morpheus”), because it helps audiences invest in each character’s story much faster. It’s just a pity the show’s eight plots are of such variable quality. Most are breezily enjoyable fare, but some are very hackneyed, while a few cover similar ground. It’s ridiculous that three of the Sensates are dealing with local criminals, for example.

On a positive note, the positive representation of Nomi as a woman who’s gone through gender reassignment is very refreshing. Her identity is never a big deal and she’s accepted by everyone, including those who only knew her as “Mike”. Lana Wachowski went through the same life change, so it’s a part of the story the Wachowskis can draw on from personal experience. Maybe the only one? Oh, and British actress Tuppence Middleton is just lovely as Riley; her sweet relationship with cop Will, and own tragic back-story in Iceland, becoming one of the show’s highlights. 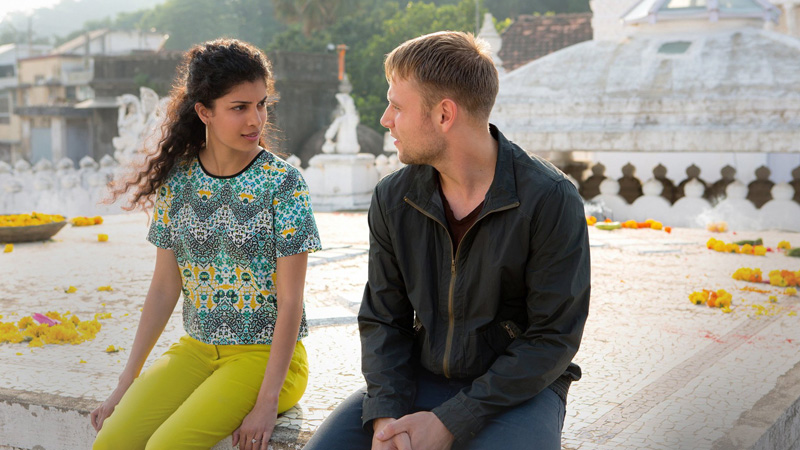 Most of the other characters are appealing, too, but only because many of the actors ooze charisma, as they’re playing roles and enacting scenarios we’ve seen a hundred times before. Arranged marriages and a closeted gay actor? Zzzz. An Asian businesswomen from a powerful family, who knows martial arts? Oh dear. A young cop who’s the son of a legendary veteran? Yeah, yeah. Each plot isn’t without entertainment-value, but most don’t justify spending twelve hours on. They feel like short stories, stretched to breaking point.

Sense8‘s plots only gain strength when they’re woven into the overall tapestry of the season, which is perhaps why story plays second fiddle to characterisation. It’s a good thing you can binge-watch Sense8, too, as it’s not until halfway through that any real progress is made. Although this leisurely pace does mean the last four episodes function better because of the careful groundwork. Still, it’s frankly a relief when the Sensates begin to operate as a tag-team, although making their enemy a creepy outfit dedicated to eradicating Sensates felt mundane. For a show already lifting ideas from Lost, X-Men, Heroes and, um, one-season flop The Nines, I guess the Wachowskis must’ve liked Doug Liman’s Jumper, too?

The show regularly perks up whenever there’s cause to mix things together—as people’s sensitivities intermingle, often unintentionally, with amusing and dramatic results. My favourite being an early shot where Capheus notices a chicken on a dusty street, which surprises Sun by magically “appearing” on her pristine office desk.

There’s clever subtext about the rise of the 21st-century’s ‘global village’, too. Ironically, humanity’s never been more isolated through connection, thanks to the internet, as the unity it offers isn’t tangible. The characters of Sense8 are products of different cultures, but the writers stress some of mankind’s commonalities: art, love, and biology. There’s a very enjoyable karaoke sequence in “Art is Like Religion” where the Sensate’s collectively sing 4 Non Blonde’s “What’s Up?”; a memorable moment in “Demons” where some of them have, um, mind-sex; and a scene at the end of “What is Human?” where the gang jointly experience an orchestra’s music while reminiscing about their own births. The Wachowskis direct that hour, and reportedly filmed a real birth for the scenes—so, points for correctly guessing which stomach bulge and vagina close-up was genuine.

The twelve-part season is beautifully shot on numerous locations around the world, which gives it an authenticity missing from other international dramas (ones forced to use geographic stand-ins, or fake backdrops). If nothing else, Sense8 is a marvel of logistics and planning; as some scenes presumably required actors to fly thousands of miles to re-film scenes in a different place, so “unremarkable” moments of dialogue become amazing feats of organisation and continuity-keeping. Which makes it infuriating Sense8 rarely feels like this gargantuan effort was worthwhile. 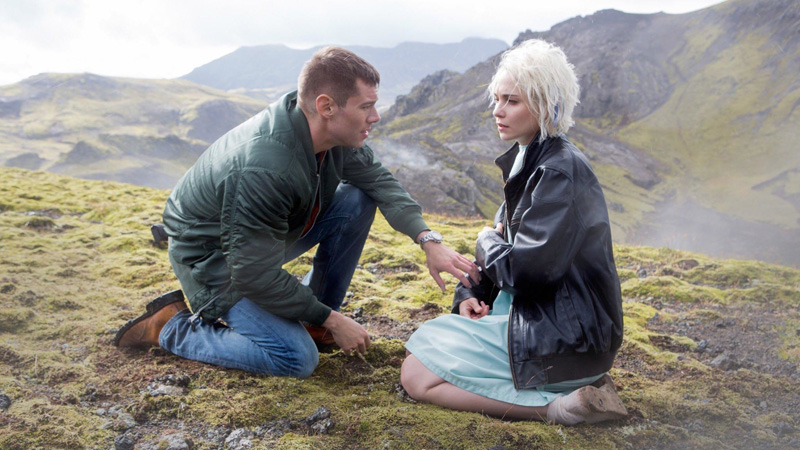 While I enjoyed the globetrotting ambition on display, and lapped up the gorgeous scenery and occasional action sequence, Sense8 has too many flaws to ignore. The characters accept their incredible abilities without much questioning or fear, which left me confused on several occasions. Maybe the Wachowskis and JMS didn’t want to write eight different scenes of people freaking out about their “hallucinations”, but just a few would’ve helped sell the believability. And the Sensate’s abilities are poorly explained: are they experiencing one another’s conscious feelings all the time? And if so, why isn’t there an immediate seven-person army every time an individual gets into trouble?

A lot of this stuff’s for nerds to argue over in forums, and may be fully explained in time, but I needed more footholds than the show provided. Or perhaps I watched the season so quickly that I didn’t notice, or remember, when some of the answers to my questions were given? It’s possible, and an unfortunate hazard with binge-watching.

Sense8 is a sci-fi drama that’s definitely worth watching, but I predict season 2 will be a truer reflection of what it wants to be. This year felt like it was going through growing pains. I’m concerned about its longterm future, however, because there doesn’t appear to be a clear goal. The characters have mastered their synthesis, and know how to work together to avoid being caught by the Biological Preservation Organisation (BPO), but what next? More of the same? The BPO want to lobotomise Sensates out of prejudice and fear, but their argument is also unclear. What harm could these people cause society? They’re superhuman only in a very empathetic and limited way, sharing a mental network between just eight people.

Answers weren’t very forthcoming this season, but I feel there’s hope for the future.