With its second instalment, Humans consolidates its position as television’s premier slice of intelligent science fiction, and continues to intrigue and unsettle. Even after two episodes it’s perfectly clear that Humans is at its best when it focuses in on the household lives of these characters, their relationships, and the dynamics they share with their various synths.

In the Hawkins household, opinions are split on their unnervingly lifelike new synth Anita (Gemma Chan). While Joe (Tom Goodman-Hill) is oblivious to most things, Laura (Katherine Parkinson) is convinced there’s something off about her—other than the inherent discomfort of sharing your house with an inscrutable humanoid that ghosts around at will, of course. Their son Toby, meanwhile, finds himself sexually confused by the presence of a beautiful “woman”, and young Sophie just likes having a maternal figure who actually wants to be there for her.

Gemma Chan’s uncanny performance as Anita continues to be a delicious, uncomfortable delight. We know she’s one of the Singularity Synths capable of free-thought, but having apparently been mind-wiped by Paul Kaye’s sleazy Silas, those flashes of independent cognition only appear fleetingly. And it’s to Chan’s credit that these moments are so apparent and effective, even as the character may not be aware of what’s going on in her own mind… um, processor? 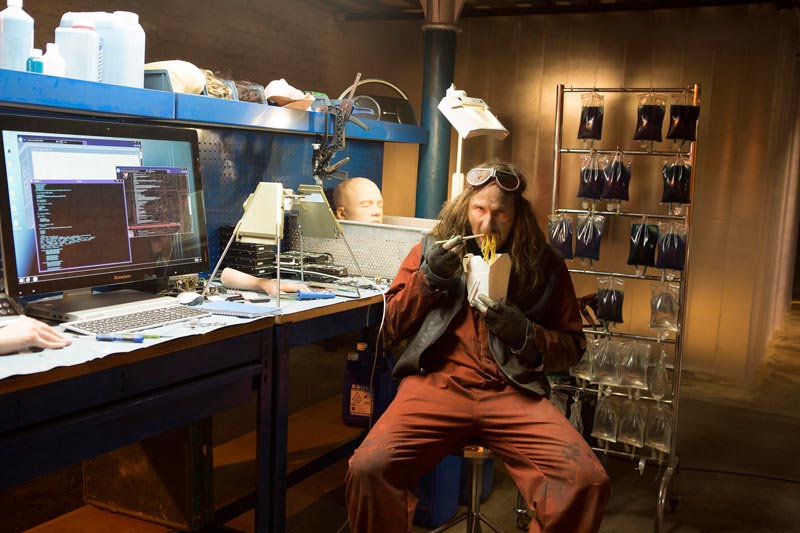 Despite the welcome presence of Paul Kaye—seemingly the eccentric genre actor of choice, following similar roles on Game of Thrones and Jonathan Strange & Mr. Norrell—the scenes following Colin Morgan’s Leo on the run are still the weakest element of the series. There are only so many scenes of Leo and Max stumbling about the city that we can take, but even this strand provides a strong moment towards the hour’s end, as an injured Leo is revealed—as we suspected last week—to be at least part synth, albeit a case apart from the others.

The scene with Max connecting Leo to a power source in a bathroom, to aid his recovery, was shot very deliberately by director Samuel Donovon to resemble a drug addict shooting up, and Morgan spasming back to life in ecstasy provided his strongest moment thus far. It’s these sorts of parallels to real-life that Humans is proving so good at drawing. Take Emily Berrington’s Niska, a Singularity Synth in hiding as a mindless sex worker, in what is unquestionably the darkest aspect of the series thus far. With the synths often acting as an analogous stand-in for the issue of immigration, having one of our freethinking synths being made to live as a sex worker—treated like an asset, a piece of property, hosed down in such a dehumanising manner—is a particularly grim comment on the plight of some immigrants in the real world.

Then there’s Dr. Millican (William Hurt) and his synth-son Odi. Their relationship is a heartbreakingly twisted depiction of the trials of having to look after a relative suffering from Alzheimer’s. Odi is an old model, and his memory’s degrading, and yet on the outside he’s still a young man. Rather than have him recycled (read: sent to a care-home), George hides Odi from his new synth Vera, who’s been forced on him against his wishes. As the new arrival Vera, Rebecca Front is superbly domineering; a militant Nurse Ratched type, she essentially renders George a prisoner in his own home. He’s a man treated like the ailing invalid that Odi actually is, but with none of the care and affection that George provides him.

This sequence also provides a wonderful moment of resigned humour, when George tries to return Vera, and finds himself talking to a synth; hilariously echoing the modern frustration of anyone who’s ever tried to contact an organisation by phone and been met with nothing but an impenetrable machine on the other end.

This second episode also delivered a better look into the life of Neil Maskell’s Peter Drummond, a sort of synth-monitoring policeman whose wife has suffered an accident that’s left her in need of physical therapy—provided, inevitably, by a synth. Peter’s a man entirely emasculated by the machine that helps his wife; a robot that resembles a much younger, healthier man, whose entire purpose is to lay hands on Peter’s wife. It’s a sad state of affairs that he should feel discarded in his own home, but seeing Jill Halfpenny’s Jill giggling like a schoolgirl in his presence, it’s easy to see why he feels so impotent. 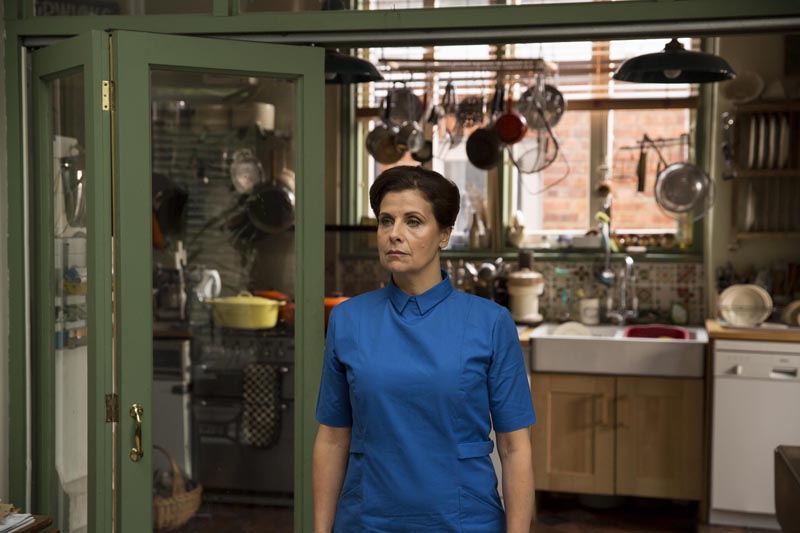 The different ways the existence of synths affects these characters is fascinating, as they all have very distinct dispositions towards them, all for very good reasons. Mattie Hawkins is another, feeling like she doesn’t belong in a world where synths can do pretty much anything that she could do, only better and faster. In an attempt to one-up the machines, she tries to hack one of them, but her misguided attempts to reassert dominance fails, and she remains adrift in a world that increasingly has no place for her.

It’s the writing of the smaller moments that makes Humans shine, but it’s also worth mentioning the haunting, ethereal score by Cristobal Tapia de Veer, which also does a lot of the heavy lifting in conveying the requisite atmosphere.

If the larger conspiracy arc is less enthralling thus far, it at least boasts the charisma of Danny Webb as the mysterious man on the trail of the Singularity Synths, and the promise of better things to come with the teased interrogation of Fred, the captured Synth, which could provide a fascinating insight into these unique machine-minds…

Two episodes in and Humans has established itself well, presenting an engaging set of characters placed in intriguing situations by their mechanical companions. Splitting our allegiance between distrust of the synths and sympathy for them is a smart move on writers Sam Vincent and Jon Brackley’s part, and let’s hope that complexity continues over the following six hours.