It’s become inevitable for most popular franchises to eventually turn to a prequel or reboot that fills in the details of their characters’ origin stories. This is especially damaging with horror franchises that try to explain their monsters. To pick just one example, while I find Rob Zombie’s Halloween movies more interesting than most horror fans, a Michael Myers who’s the product of an abusive home is inherently less frightening than the chillingly inexplicable personification of evil from John Carpenter’s original. I skipped both the book and movie Hannibal Rising for this reason: the portions of Hannibal that tie the origins of his cannibalistic tendencies to the death of his beloved sister Mischa are among the weakest in that book, and I had no interest in an entire narrative devoted to The Young Hannibal Lecter Chronicles. Patton Oswalt put it perfectly in his bit about the Star Wars prequels—”I don’t give a shit where the stuff I like comes from! I just love the stuff I love!”

Of course, Hannibal the TV series, which I initially shrugged off for the same reason, has proven to be a terrific exception to this rule. This week’s episode, “Secondo”, was a strong reminder of the huge (and growing) divide between the show it logically should have been—an intense young Cumberbatch-y type tossing off bon mots with his best Anthony Hopkins impression—and the show it is. By having Will Graham (Hugh Dancy) journey to Hannibal’s childhood home and touch upon the character’s backstory as presented in Hannibal Rising, Bryan Fuller and episode co-writers Angelina Burnett and Steve Lightfoot took the risk of undermining the impact of Mads Mikkelsen’s incarnation of the character. Thankfully, the episode proves to be a time where Fuller departs from Thomas Harris and smartly subverts our expectations for this kind of story. 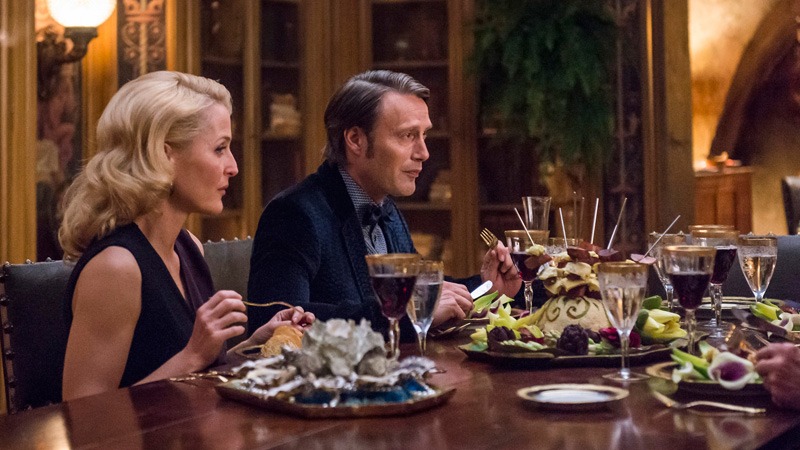 This episode introduces us to Chiyoh (Tao Okamoto), a former assistant to Lecter’s aunt, who lives alone in the big, decaying estate that Will discovers in Lithuania. A minor character in Hannibal Rising, Chiyoh’s role has been expanded here, and The Wolverine‘s Okamoto is a fine addition to the cast—when we first spy Chiyoh, a cloaked figure hunting birds, she seems to spring organically from the Hammer-esque setting. We soon learn that she keeps a prisoner in the house’s basement, who’s apparently been there for a long time, explaining that Hannibal told her this is the person who killed and ate his sister. I was worried this would lead to flashbacks providing a too-neat psychological motivation for Hannibal’s unique proclivities. Instead, the episode upends that initial setup—by its last scene, we’ve learned from Bedelia (Gillian Anderson) that it was Hannibal who ate and possibly murdered his sister. The details are left a bit ambiguous, but it’s strongly hinted that it was some kind of betrayal, and not Nazis (which wouldn’t make sense in this contemporary timeline anyway), that led to Hannibal snacking on his beloved sibling. When pressed by his therapist and captive, this Hannibal borrows a line from his counterpart in Harris’s The Silence of the Lambs: “Nothing happened to me. I happened.”

While Hannibal has always been a character-driven show, these first three episodes have been especially focused on exploring the characters and their relationships; particularly the emotional detritus of the “breakup” between Will and Hannibal. “Secondo” explicitly foregrounds the idea that this is a twisted love story between its two leads, and is divided between three sets of dialogues—Will and Chiyoh, Bedelia prodding her patient/captor (giving Anderson more shades of ambiguity to play, which she does wonderfully), and Inspector Pazzi (Fortunato Cerlini) and Jack Crawford (Laurence Fishburne), who is indeed alive and searching for Will in Italy. Regret hangs heavily over each, as Will, Hannibal and Jack each try to make sense of things that have been broken and can’t be repaired—there’s palpable guilt in Jack’s voice as he explains to Pazzi that he borrowed Will’s mind and broke it, and I’m interested to see where this season takes the character. The same goes for Will—by the end of this hour, he’s manipulated one character to kill another and repurposed the corpse for his own valentine to Hannibal (couldn’t they just try vaguebooking?). Will is fundamentally not the same person we met at the beginning of the series, and I wonder how (or if) he’ll progress to the haunted but stable and loving family man we’re introduced to in Red Dragon. 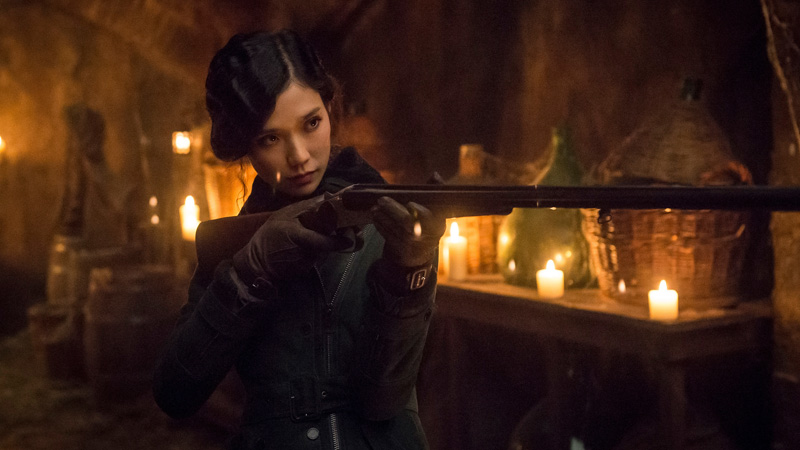 The deliberate pace of the previous two episodes has been frustrating for some viewers, and I understand why—Fuller and his team enjoy teasing out the answers to the questions left by season two, and prolonging the inevitable confrontation between the two leads. Personally, I like that the show is getting weirder and disappearing further into its own head, especially as the contents of the show’s mind palace are growing more and more grotesquely beautiful. The scenes in Lithuania are straight out of a Hammer horror, with a couple of nearly wordless sequences working brilliantly on a level of pure atmosphere, as Will creeps through a fog of sickly blues and greens jarringly punctuated by fireflies.

Vincenzo Natali, who’s directed the first three episodes, has gotten season 3 off to a great start—even when the dialogue tends towards the ponderous, he does a brilliant job of sustaining the tension (Director of Photography James Hawkinson also deserves credit as a crucial part of the show’s effectiveness). And even a “slow” episode of Hannibal features a couple of murders—one startling, the other darkly comedic—and moments of dryly hilarious perversity, none better than the moment when Bedelia asks Hannibal, “How did your sister taste?” as if she was asking him how his week was. Incidentally, based on the evidence in the last two episodes, NBC’s Standards and Practices department is totally cool with horrifying violence and double entendres alluding to cannibalism and incest… just as long as any bums or nipples in a Botticelli are tastefully blurred out.

HUMANS – series one, episode one