Darin Morgan was always a name to look out for in the credits of 1990s The X-Files, having penned many of the show’s funniest and most successful hours. He singlehandedly invented the ‘comedy episodes’ the series occasionally indulging in, even after he left. An Emmy-winning contributor during his time on the series, it was always a shame Darin notoriously hated the writing process and never found another TV project as suitable for his screwy humour.

Since The X-Files returned, we’ve been treated to two of his absurd and yet deceptively intelligent tales, with “Mulder and Scully Meet the Were-Monster” the undoubted highlight of the otherwise terrible tenth season. But that was a script written for another show a decade before, which he retrofitted for The X-Files, so “The Lost Art of Forehead Sweat” was more contemporary in its targets. Although that may date things quicker than his other episodes, which are timeless… 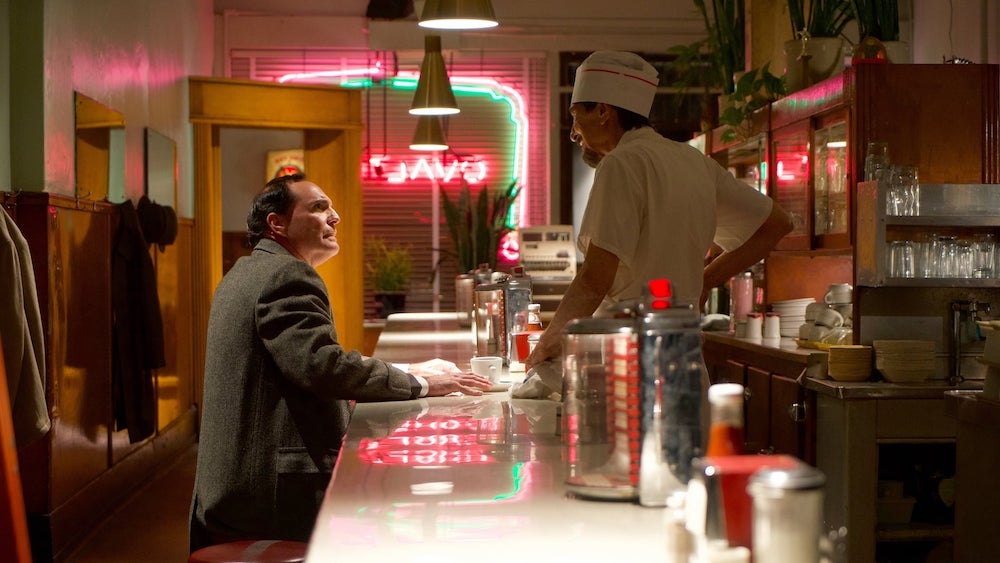 Here, Darin took aim at the Mandela Effect, which I found particularly amusing because this internet meme became a brief obsession in my workplace a few months ago. Mulder (David Duchovny) met with fellow conspiracy theorist Reggie ‘Something’ (Brian Huskey), who believes a mysterious doctor is manipulating collective memories so people aren’t remembering the past as it truly happened.

Famous real-life examples of the Mandela Effect include Star Wars’s C3-PO having a silver leg (he really does!), people convinced HBO made a drama called Sex in the City (not Sex and the City), the Monopoly man having a monocle (he doesn’t), and the Berenstain Bears children’s book being spelled “Berenstein Bears” with an ‘e’. The last one was even parodied within this episode, as Reggie thought a childhood book he read by “Dr. Wuzzle” was spelled with s’s instead of z’s. Or was that a nod to “Dr. Seuss” being misremembered as “Dr. Seuzz”? You get the idea. 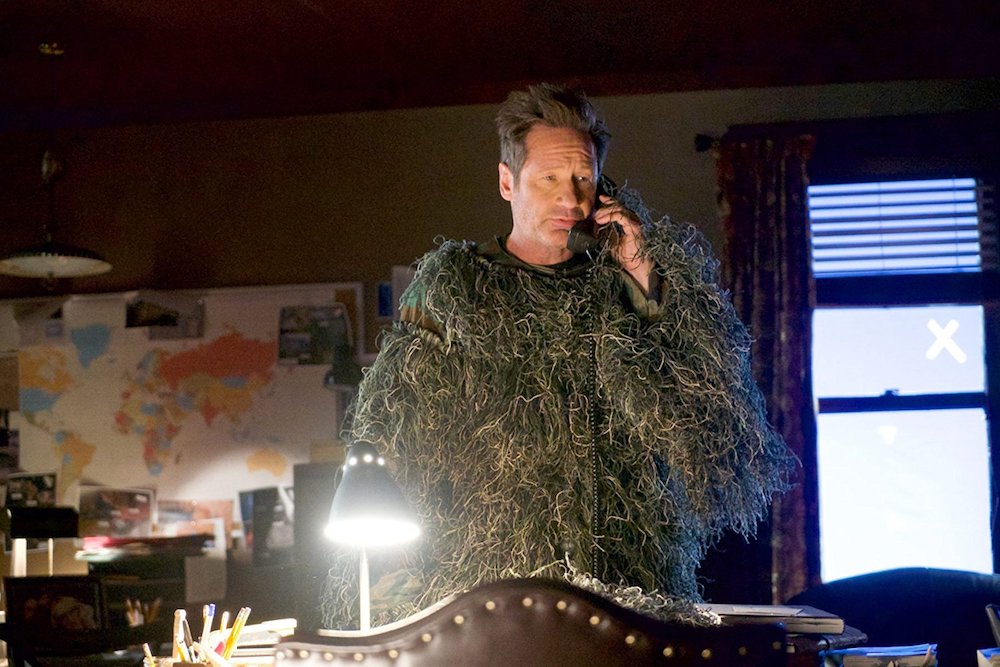 There are numerous ways to explain the Mandela Effect, and the top three explanations lend themselves very well to the trio at the forefront of this story: Reggie thinks it’s a mind-altering global conspiracy George Orwell predicted (“he who controls the past controls the future”); Mulder hypothesises a parallel dimension is occasionally overlapping with ours; and Scully thinks it’s as simple as people misremembering trivia.

“The Lost Art of Forehead Sweat” was quite thin in terms of plotting and what was going on, as it was just an amusing framework to throw in lots of silly visuals, bonkers scenes, tongue-in-cheek dialogue, and in-jokes. There was a black-and-white teaser about a crazy man who thinks Martians have invaded, who then realise he’s one of the extra-terrestrials (which we learned was just a scene from Mulder’s favourite Twilight Zone episode, “The Lost Martian”); the sight of Mulder returning home from “squatching” in a hairy Bigfoot costume; and the hilarious and perfectly executed sequence where Reggie was inserted, Forrest Gump-style, into classic X-Files moments from “Squeeze”, “Home”, and suchlike, after claiming he used to be Mulder and Scully’s workmate at the FBI. Did I mention the flashback to Mulder as a little boy watching TV, where his adult head was pasted onto his tiny body? 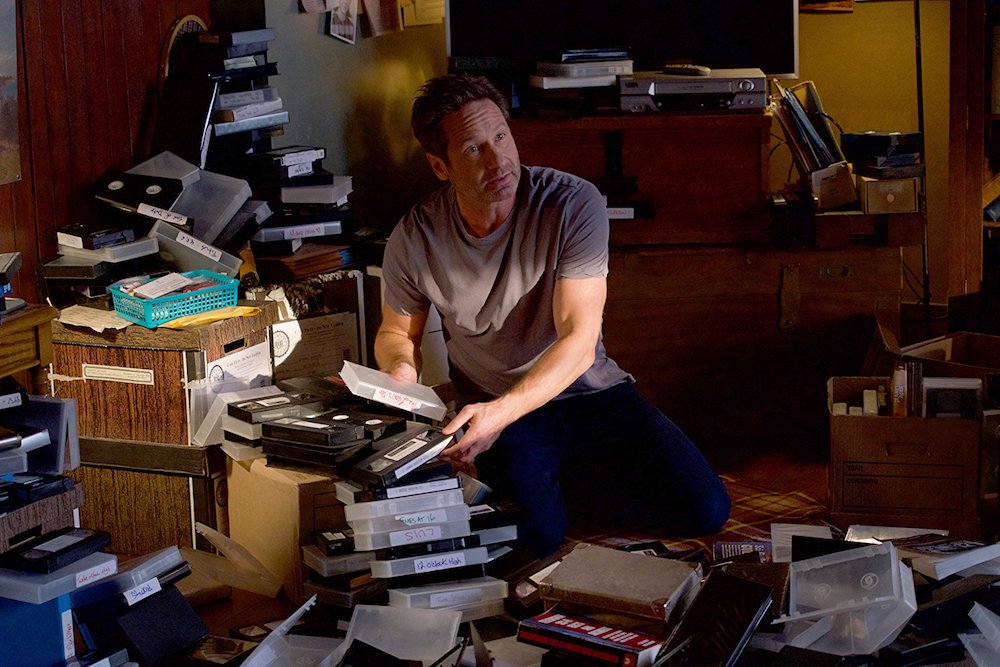 In pure Darin Morgan style, this episode was a confection box of ridiculous moments done with a bone dry sense of humour that matches David Duchovny’s style of delivery in particular. And yet, while the Mandela Effect was a funny target to fool around with, the script contained layers of psychological depth and relevance. The X-Files has hinted at the presence of Donald Trump before, but the President’s strategy of lying to serve his agenda and confirm the prejudices of his base, because Americans are lost in a “post-fact” world facts your government don’t like can be dismissed as “fake news”, became a large part of what this episode was truly about.

There may not have been a sinister “Dr. They” (Stuart Margolin) tweaking the memories of people around the world, but the idea of “the truth” becoming a slippery concept because some people prefer it that way, was very well argued. There was even a scene where a bulbous-headed alien descended from his flying saucer (equipped with a railed escalator), to reveal his kind are building an invisible wall because the people of Earth aren’t sending the “best people”. Trumpism’s gone galactic—scary! 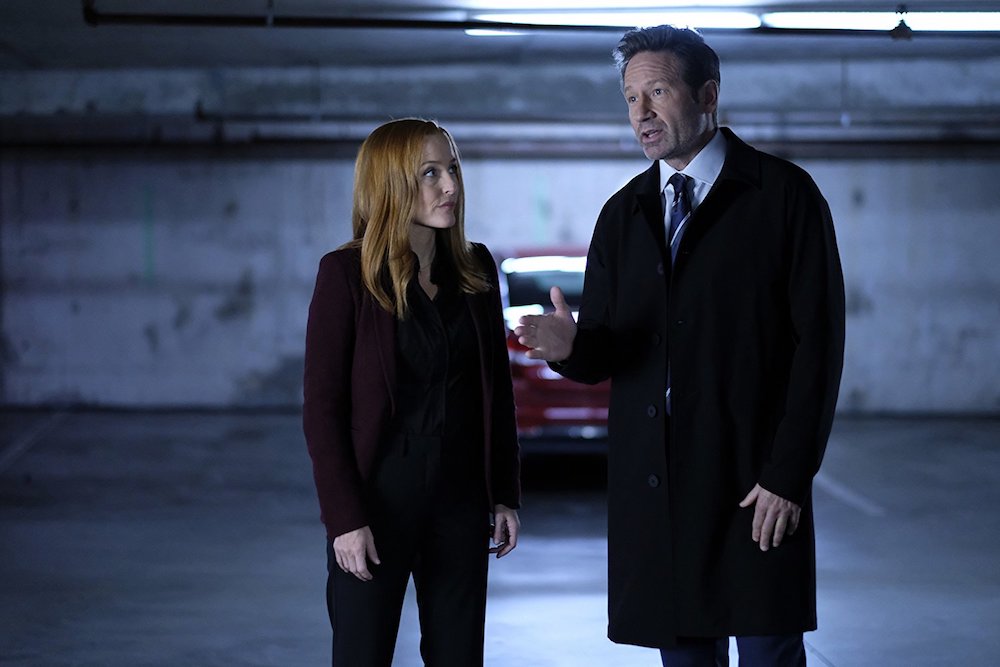 It says a lot about The X-Files that its best modern episode are those lampooning itself, but the great thing about Darin Morgan’s writing is that he always introduces just enough solid ideas to stop everything feeling stupid or trivial. Mulder’s exasperation that “the world has become too crazy for my conspiratorial powers!” summed up the problem with reviving The X-Files, in many ways. His later outburst to some young federal agents— “I’m Fox-freaking-Mulder, you punks!” — hinted at the character’s own obsolescence and midlife crisis. And ‘The Truth Is Out There’ has always been the show’s mantra, but this episode made you realise how malleable the truth has become in 2018’s “post-cover-up, post-conspiracy age”.

“I want to remember how it all was”, opines Scully in a final scene, tucking into a foot-shaped mould of her favourite childhood jello with Mulder. Sometimes it’s better to remember things as they’ve existed in your head all these years, as imperfect as those memories might be, which pretty much applies to The X-Files now and then.