While home sick in bed, a young boy's grandfather reads him a story called The Princess Bride.

Never once as funny as Monty Python and the Holy Grail (1975), or as visually rich as The Never-Ending Story (1984), the enduring appeal of The Princess Bride has long eluded me. Adapted by screenwriting legend William Goldman from own 1973 children’s book, it’s a pleasant enough experience with some memorable scenes and quotable dialogue, but it’s honestly never connected with me.

I do enjoy the conceit of the film, as a Grandpa (Peter Falk) visits his sick grandson (Fred Savage) to tell him a bedtime story, that the movie itself is a visual representation of. This means the storytelling sometimes gets interrupted during the movie, to amusing effect, such as when the grandson cringes at the idea of kissing. 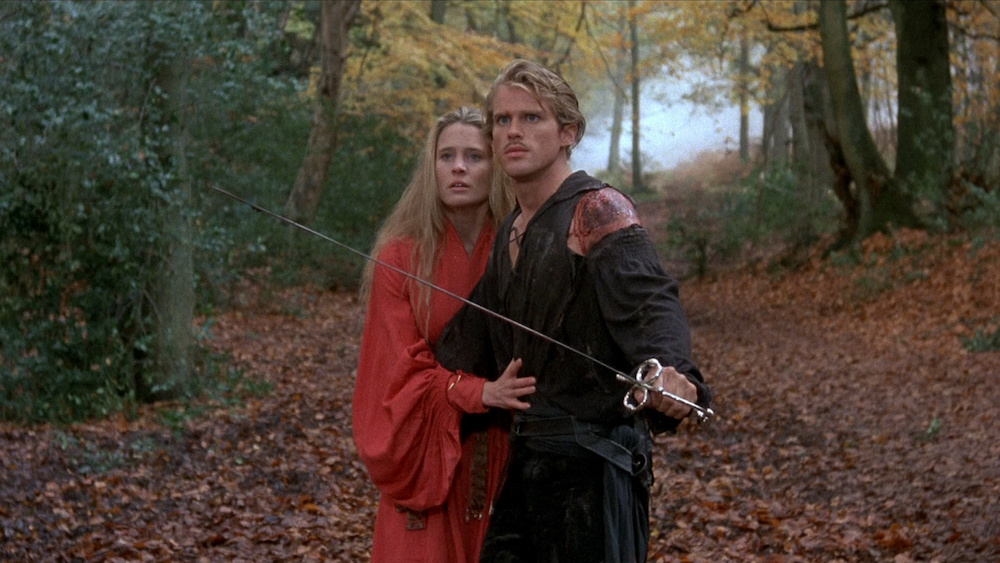 There’s synergy with the aforementioned Never-Ending Story, in how there are two levels of the story being told, but it’s not quite as interactive as Wolfgang Petersen’s fantasy.

Rob Reiner directs this movie, having already made his mark with This Is Spinal Tap (1984) and Stand By Me (1986), and I’m not convinced he was the best man for the job. The Princess Bride showcases some wonderful British locations, but it’s otherwise a pretty mediocre movie in terms of the visuals. The cinematographer was former ad man Adrian Biddle, a friend of Ridley Scott, and this was his second movie after Aliens (1986), but he evidently got more confident by the time Willow (1988) secured his career in Hollywood.

Princess Bride has always looked a bit cheap to me; a feeling amplified by the atrocious soundtrack by Mark Knopfler of Dire Straits fame. 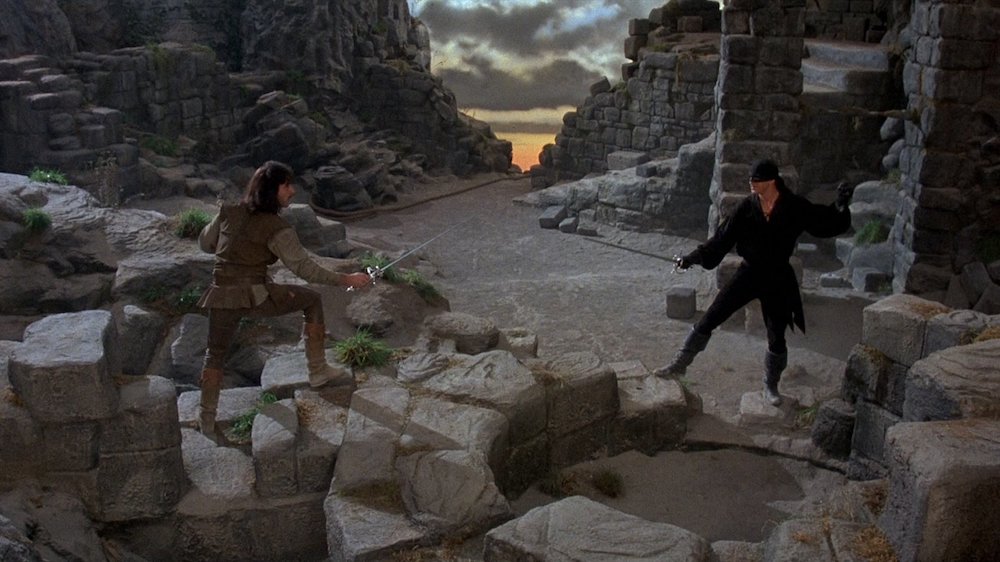 The story of “The Princess Bride” itself is a mishmash of fairy tale archetypes and cliches, which the movie subverts and challenges to varying degrees of success. A beautiful girl called Buttercup (Robin Wright) falls in love with her handsome farmhand Westley (Cary Elwes), who leaves to seek his fortune so they can marry. But after returning five years later, now a dashing masked pirate, he’s disappointed to find his beloved’s set to marry handsome Prince Humperdinck (Chris Sarandon). And so begins an adventure that comes to involve three outlaws who kidnap Buttercup—Sicilian genius Vizzini (Wallace Shawn), large wrestler Fezzik (André the Giant), and Spanish swordsman Inigo Montoya (Mandy Patinkin)—forcing Westley to mount a rescue and stop Buttercup’s nuptials from going ahead. 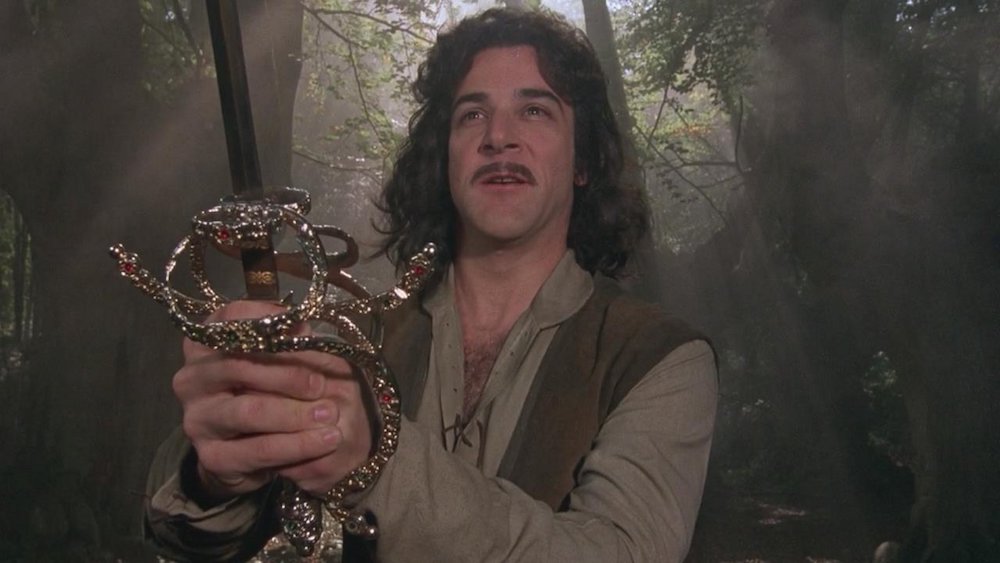 I don’t hate The Princess Bride, let’s be clear. It has several iconic scenes and very likeable characters. Westley and Inigo’s duel at the top of the Cliffs of Insanity is enormous fun, helped by the fact Elwes and Patinkin trained so hard they accomplished almost every stunt. The scene with the poisoned goblets between Vizzini and Westley also a wonderful twist ending that always make me giggle. And then there’s the phrase “Hello, my name is Inigo Montoya. You killed my father. Prepare to die”, which has entered the movie dialogue Hall of Fame. But as a kid I always found the sequence involving a machine designed to suck years away from your lifespan a very frightening concept. More so the older I get, actually.

There’s certainly nothing that’s objectionable or truly awful about The Princess Bride, but I always come away feeling slightly disappointed by it. It’s a muddle of swashbuckling ideas and entertaining scenarios, but never transcends the material to become something more than a fun diversion. 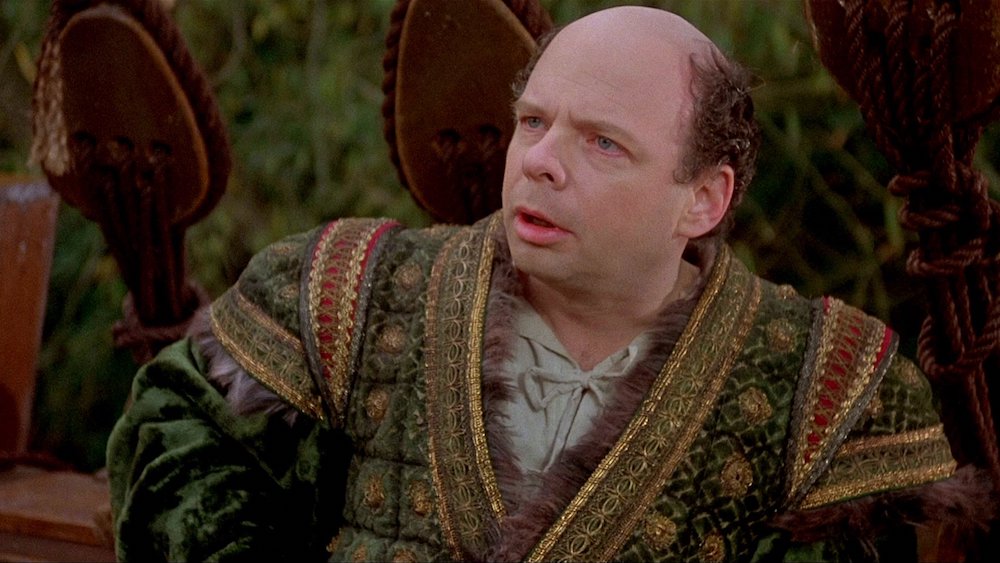 The pacing has always felt strange to me, as everything seems to crawl once the first half-hour is over, and I’m always surprised to realise it’s 98-minutes long. It seems closer to two hours. I think part of the problem is that you know exactly where everything’s headed at one point, and the movie doesn’t do much to challenge your predictions. Once we’re into the back half of the narrative, where various comedians get wheeled on for a turn—Mel Smith’s albino torturer, Peter Cook’s clergyman with rhotacism, Billy Crystal’s aged miracle worker, and his wife played by Carol Kane—my enthusiasm always drops.

Still, this movie’s place in pop culture is assured three decades later. It was only a modest success at 1989’s box office, making $30 million from a $16m budget, but later found an audiences on VHS and has now become a childhood favourite of many. I can see why that might be, if you first saw The Princess Bride during the late-’80s or early-’90s, when there wasn’t much else like it around. It certainly has a great deal of charm and quotable lines, but I do wonder if its reputation has been inflated over the years. For me, it never coheres into anything more than a likeable romp with some funny moments.

The Princess Bride is now on limited release in the UK, to celebrate its 30th anniversary, and available to buy on Blu-ray & DVD.

Written By
Dan Owen
More from Dan Owen
Two couples rent a vacation home for what should be a celebratory...
Read More