From popular US TV series Get Smart (1965-1970) to Austin Powers: International Man of Mystery (1997), James Bond has always been a target of parody. The secret agent satire has been around for so long they’ve developed into their own comedy sub-genre. Starting with Johnny English (2003), the film was based on the on a Barclay’s Bank ad campaign from the 1990s, where Rowan Atkinson (Blackadder) strayed from his Mr Bean character and became the confident but incompetent eponymous British spy.

This series has never been critic-friendly, but it’s been a surprising success everywhere except the US. With a budget of roughly $40M apiece, the first two films grossed approximately $160M each worldwide. It’s now been seven years since Johnny English Reborn (2011) and Universal was correct in predicting the same success could be achieved with a third instalment. Made for half the budget of its two predecessors, Johnny English Strikes Again (2018) grossed $158M worldwide! 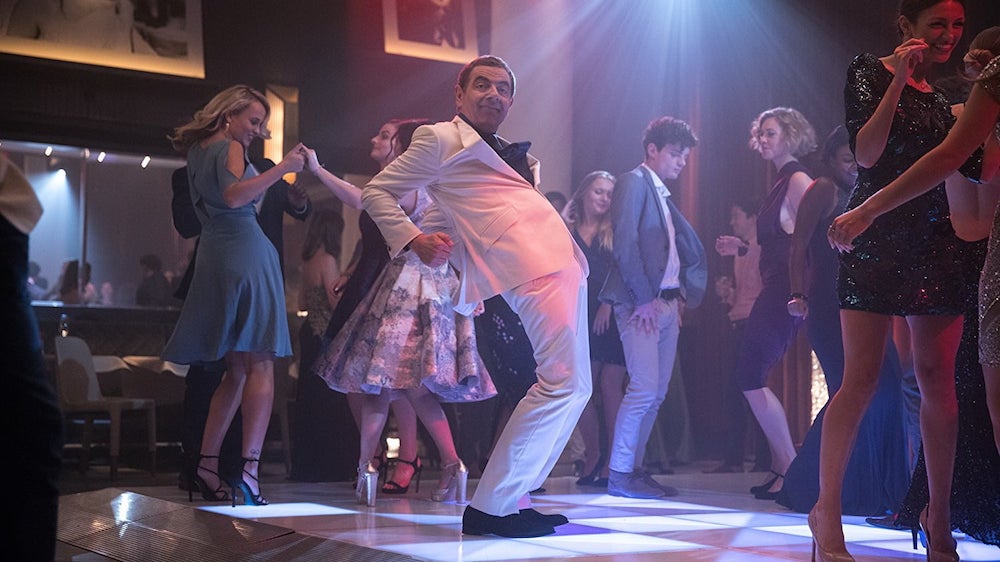 Transferring from TV to film, accomplished BBC comedy director David Kerr (That Mitchell and Webb Look) here teams up with acclaimed screenwriter William Davies (How To Train Your Dragon). In addition, the ensemble of talented cast Emma Thompson (Love, Actually), Ben Miller (Paddington 2) and former Bond Girl Olga Kurylenko (Quantum of Solace), join one of the most recognisable faces in British comedy.

After a hacker compromises the identities of all MI7’s spies, the Prime Minister (Emma Thompson) calls upon all retired personnel to solve the case. The only spies safe from having their identities revealed are those who retired, but since the elderly ex-agents are either now dead or having hip replacements, bumbling Johnny English (Rowan Atkinson) is drafted from his job as a school teacher and sent back into action, along with his old sidekick Bough (Ben Miller). The bumbling duo jump into a vintage Aston Martin, put in a cassette tape, and drive to France in search of a cyber-criminal that has compromised the British Government’s spy network. 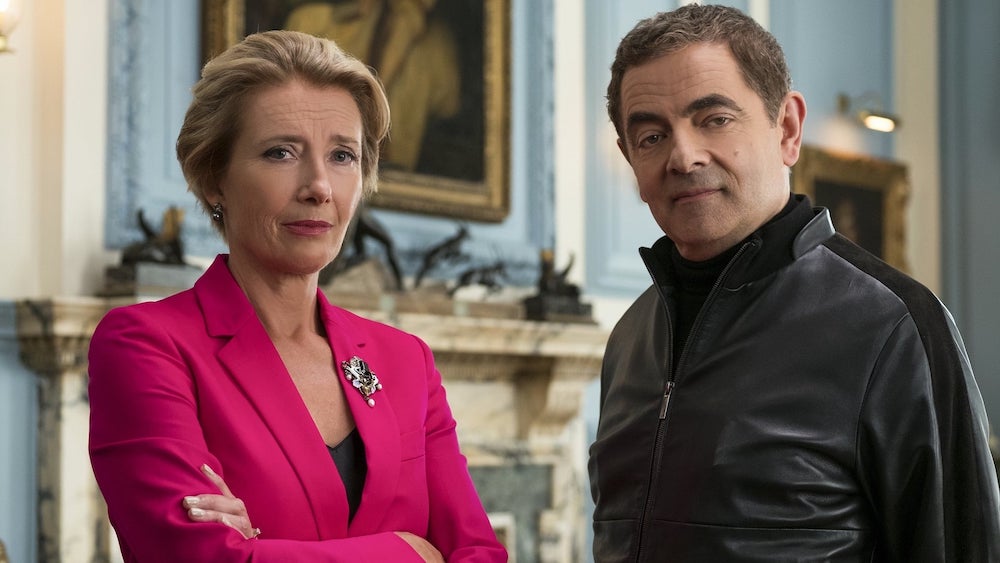 Rowan Atkinson is a timeless comic legend who’s earned great respect he recognition. Whether it’s his world-famous silent character Mr Bean to his work on Blackadder, Atkinson throws his entire body into every comedic performance. A technician in the art of physical comedy, he dedicates himself fully to whatever character he’s given regardless of the project’s quality. From the ridiculous Wayne Knight in Rat Race (2002) to a gift wrapping extra for Alan Rickman in Love, Actually (2003), Atkinson’s appearances are always memorable. As Johnny English he covers himself in body paint and beats a man with two baguettes, yet still remains a charming buffoon.

The previous films had surprisingly prestigious actors in the supporting cast, from John Malkovich to Rosamund Pike (Gone Girl), and this tradition continues with the brilliant Emma Thompson as PM. Frantically pacing the corridors of Number 10, she fits the role perfectly. However, her talent is reduced to an alcoholic parody of Theresa May slowly losing the confidence of her country. In retrospect, the PM is portrayed quite accurate as in reality the country’s faith slowly diminishes as the dreary cloud of Brexit looms over the UK. Thompson herself is funny when the script allows her to be. Teasing the audience with her comedic ability leaves you wanting more scenes with her character. 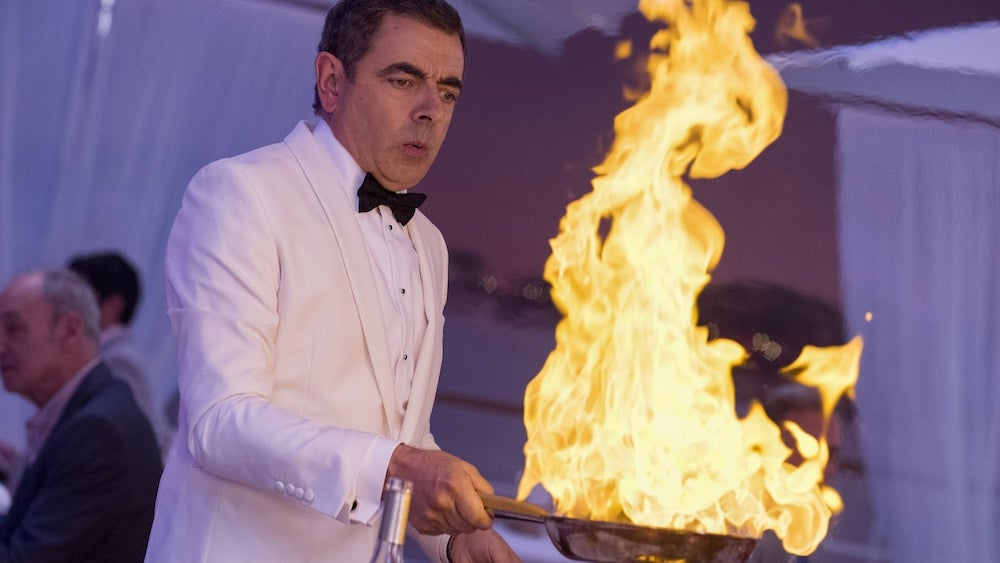 Jake Lacy (Rampage) does his best as the villainous tech giant Jason Volta, a  sleazy hybrid of Elon Musk and Mark Zuckerberg who tries to be both funny and menacing, but unfortunately Lacy comes across as neither. He lacks the charisma of Samuel L. Jackson in Kingsman: The Secret Service (2014), and without any motive he comes across as a Scooby Doo-level villain. Thankfully, Johnny English Strikes Again backs up the lead admirably with other supporting players. Miller is sturdy as the straight man for English’s incompetence, bouncing well off each other, with an air of Laurel and Hardy during a French waiter scene. Kurylenko manages to keep up with Atkinson in the comedy stakes and seems game for ridicule. I’m surprised she managed to keep a straight face as Russian femme fatale Ophelia.

The bare-bones plot is a stirred and shaken cocktail of Skyfall (2012) and Spectre (2015), with a slice of Monty Python slapstick for extra zing. Davies’ script is the weakest aspect of the movie, as the story is frustratingly predictable. Several of the gags can be seen coming a mile away, and some of the material fails to hit the mark in certain areas and a few sequences feel like they belong in a sketch show. However, they’re fairly entertaining and there’s a feeling of real fun being had during some of the cleverly choreographed skits. 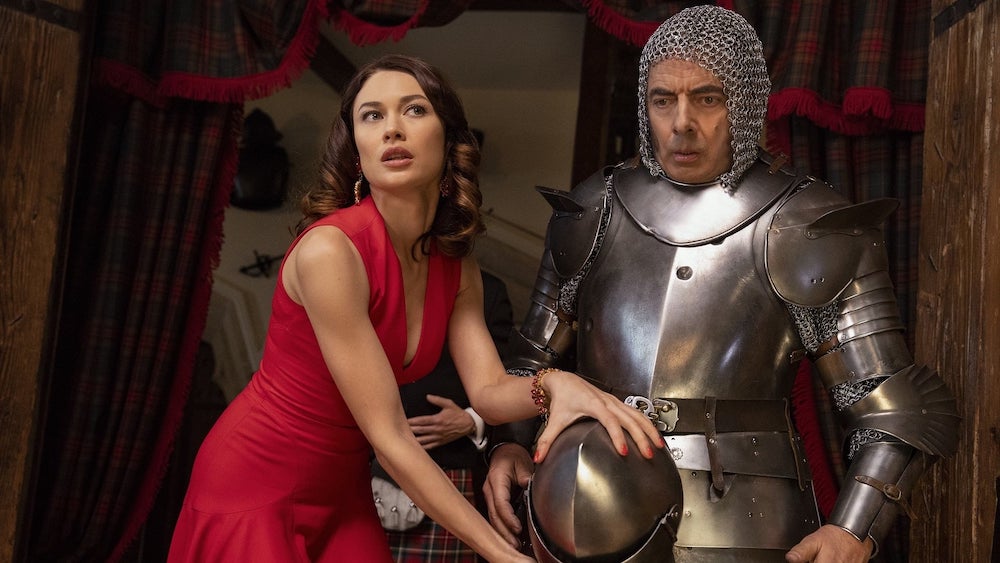 The funniest gags happen within the first 20-minutes, with a retired English as a boarding school teacher ushering kids out of a window on a zip-line without the headmaster noticing; a funny concept, well executed. Later, a string of cames from Michael Gambon, Charles Dance, and Edward Fox involving a  ballpoint pen was genuinely hilarious. The sight gags could easily have been lifted from Leslie Nielsen’s Spy Hard (1996) or Jean Dujardin in OSS: 117 (2006). These standout scenes and Kerr’s steady direction makes sure the movie doesn’t outstay its welcome.

If you’ve seen the previous instalments or are a fan of physical comedy, Johnny English Strikes Again will provide laughs. But while it delivers plenty of slapstick humour, the story isn’t very original and feels like a recycled Bond script. 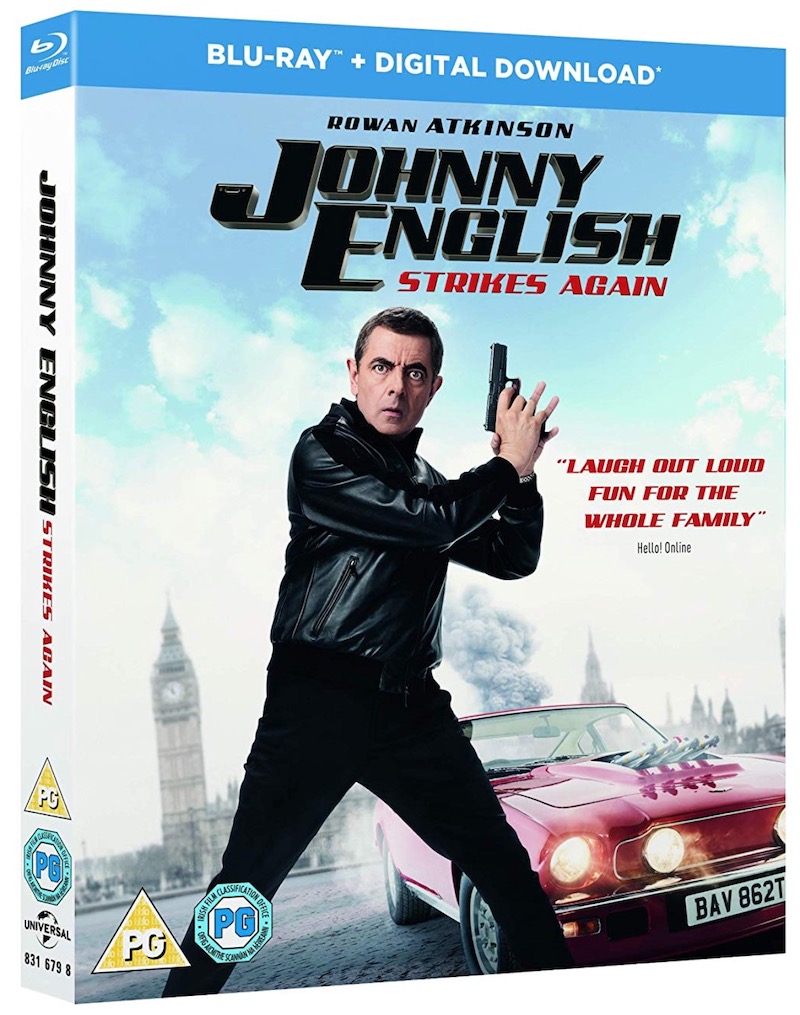 The digitally-sourced picture is sharp from corner to corner. The movie was digitally captured on Red Epic Dragon cameras but the 1080p transfer keeps a nice film-like quality to the picture. Character close-ups reveal precise skin details showing pores, skin lines, and hair with impressive clarity. Colours are bold and intense, especially English’s red Aston Martin and the deep blacks retain their shadow. The fine detail is excellent from the gravel on the streets of London to the sunlight peering through the curtains in the Prime Minister’s office.

Johnny English Strikes Again gets the most out of its DTS:X surround sound audio mix. The majority of the gags are front and centre with their audio-visual balance, but there are a number of great off-screen sound effects that are perfectly placed. The occasional explosion or echo of chaos in the background make use of every speaker and create a good laugh. Another highlight is when English gets his Aston Martin V8. The echo in the warehouse when the engine roars to life is as impressive as the car itself. Dialogue delivery is clear in every scene, but the highlight is the music. The depth and detail of the 7.1 audio channels during a dance scene transform the soundstage into a dance floor.

Universal offers a solid mix of extra features. Several 5-minute shorts offer an in-depth look at the gadgets, cars, and locations used in Johnny English Strikes Again and should give movie buffs a better insight into the movie. The short documentary The Comedy Genius Of Rowan Atkinson has the cast and crew discussing their experience working with a comedy legend, and we even get a short interview with the man himself. The audio commentary from director David Kerr is entertaining and he speaks lovingly of making the film, offers notes on Atkinson’s inspirational comedy, and reveals some fun facts.

Johnny English Strikes Again is out now on Blu-ray and DVD from Universal Pictures Home Entertainment.