On paper, Rocketman looks like a formulaic biopic about musician and singer Elton John, but Dexter Fletcher (Eddie the Eagle) creates a fresh way to present a well-worn story. We’ve all seen the biopic about the sad but talented little boy who finds fame and fortune before descending into a dark world of drink and drugs… but you’ve never seen a film that blends fantasy, musical, and biopic so seamlessly and in such an engaging way.

Rocketman is a bold film, especially because a biopic about a tubby kid from Middlesex, England, who went on to sell 300 million records worldwide, would make a decent amount of profit no matter the artistic integrity. This film is unusual, eccentric, and not for everyone—a perfect representation of Elton’s venerable showbiz career. 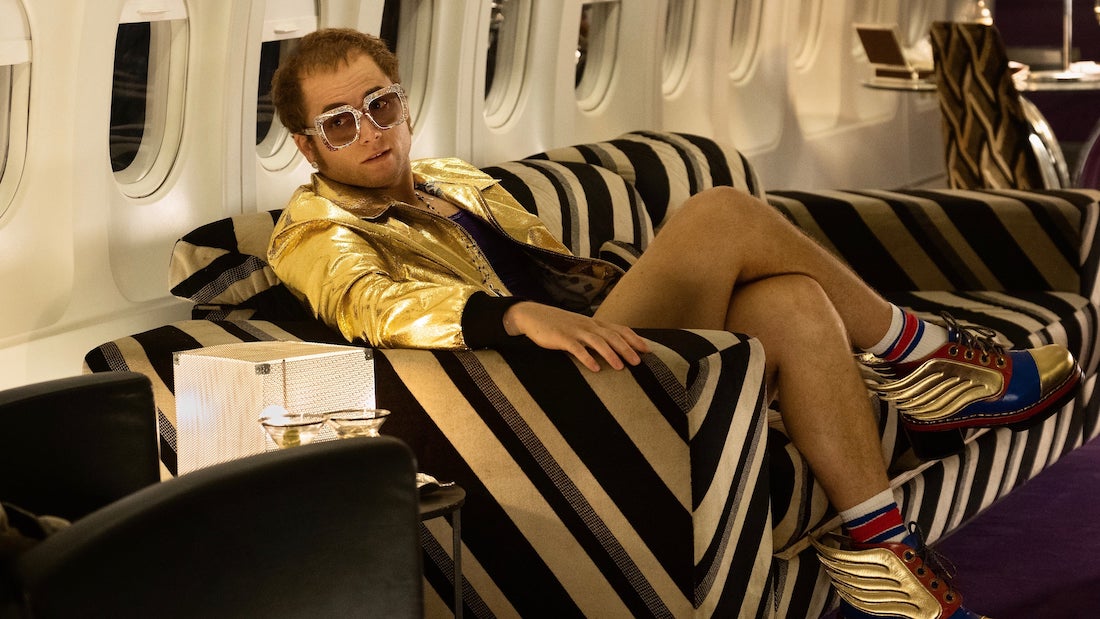 It’s a tribute to Elton himself that he’s co-produced such an honest film about pain and heartache, where he rarely comes across as the good guy in his own narrative. From the first blunt line of dialogue where Elton (Taron Egerton) enters rehab in a bedazzled costume of feathery orange wings and jewel-encrusted horns, declaring “my name is Elton Hercules John and I’m an alcoholic, and a cocaine addict, and a sex addict and a bulimic”, you know this isn’t going to be a gentle biopic about a little boy called Reg Dwight who played the piano and later sung at Princess Diana’s funeral. This addict’s meeting frames the film, allowing Elton to tell his life story to a room full of strangers while allowing the writers to play with chronology.

The pacing isn’t great, however. The timeline isn’t always factually correct and certain milestones are skipped, but the music fills any narrative shortcoming. Elton’s first engagement is ignored, likewise his pre-fame career, and the singer’s marriage to Renate Blauel (Celinde Schoenmaker) appears as a mere blip. But there’s enough setup, mostly via the music, that we understand why he made such decisions and can fill in the blanks ourselves. Like a wonderful jukebox musical, Rocketman has a simple screenplay because it’s the music that does the emotional heavy lifting. 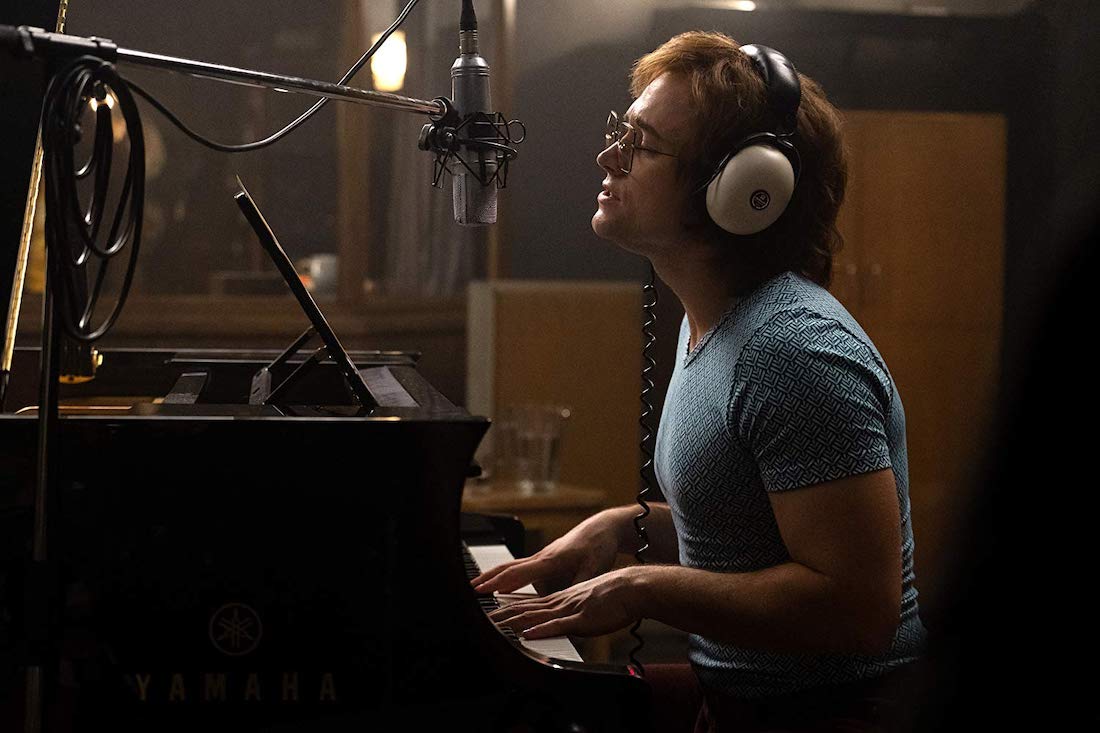 Bryce Dallas Howard (with a good English accent) plays Elton’s mother, Sheila, a woman scorned by her husband and with rather Victorian views on parenting, while Elton’s father (Steven Mackintosh) is portrayed as a cold, uptight man of his time. All little Reggie wants is affection at home but finds not much on offer. The only person who seems to give him the time of day is his adoring grandmother (Gemma Jones). Elton’s never shied away from blaming his adult problems and obnoxious attitude on his cold upbringing, and Rocketman’s entire plot centres on this.

Screenwriter Lee Hall (Billy Elliot) doesn’t write Elton in a particularly nuanced way, but Taron Egerton (Robin Hood) delivers a committed and layered portrayal of the man and legend. From the moment he walks through the doors and takes a seat, in the opening scenes, he is Elton John. He perfectly portrays someone who always walks the fine line between diva and genius, the good and the bad sides of his personality forever at war. Egerton even has the accent down to a tee and helpfully sings all the songs for real and sells his on-stage flamboyance as well as Elton’s drug-infused meltdowns. The scenes where he performs are genuinely uncanny, as he brings the same charisma, energy, and chaos to the stage as the real Elton did. And all with an underlining sense of self-loathing and a penchant for destruction. If Egerton doesn’t get the same award recognition as Rami Malek did for his performance as Freddie Mercury in Bohemian Rhapsody (2018) it will be a crime. 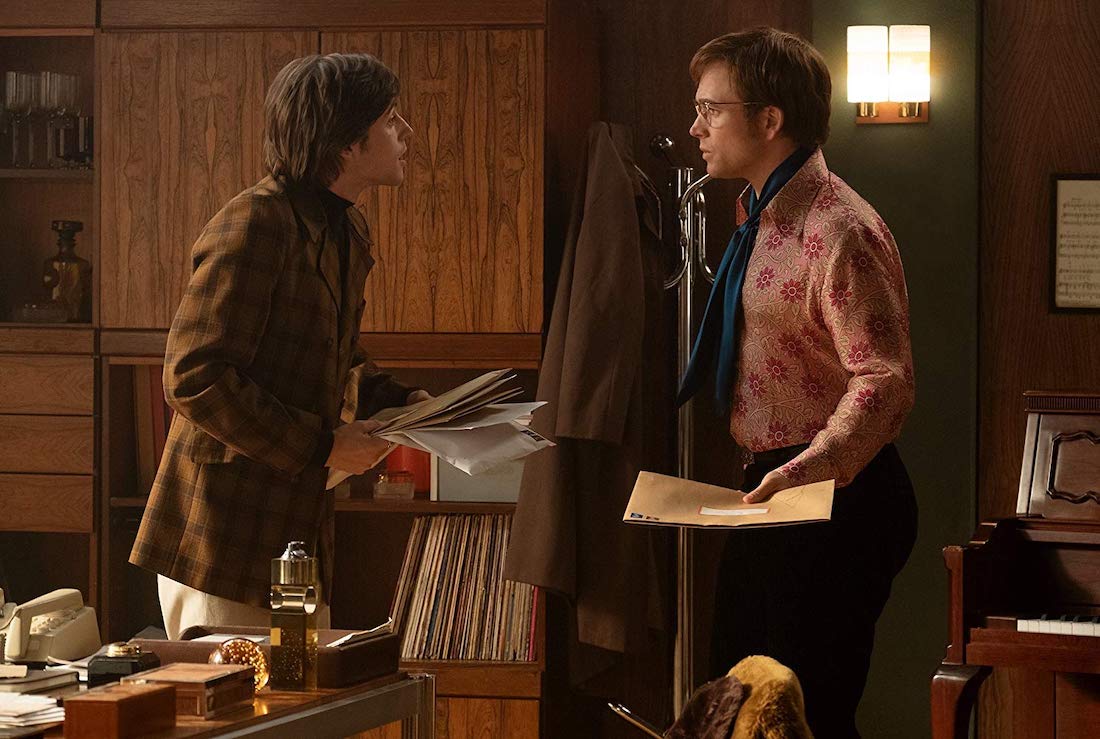 Unlike other recent biopics, Rocketman never shies away from Elton’s private life. It feels refreshing for a mainstream film to be so open about homosexuality; to show men flirting with each other, the candid uncertainty Elton had about fancying men, and a revolutionary sex scene for a PG certificate movie. The fact such a non-graphic sex scene between two men has become such a talking point shows Hollywood still has a long way to go. Rocketman is, reportedly, the first mainstream cinema release to show male-on-male sex. Call Me By Your Name (2017) and Brokeback Mountain (2005) also depicted gay sex but was made by smaller studio off-shoots with limited cinema releases.

Richard Madden (Cinderella) is on seductive form as Elton’s manager, John Reid (who also appeared in Bohemian Rhapsody, played by his Game of Thrones co-star Aidan Gillan). Madden keeps his performance away from cliché as the man who forces Elton on stage, no matter how much he’s snorted, how close he is to a mental breakdown, or how mad he is at his former lover. Madden and Egerton have a natural chemistry that never feels awkward or strained.

Throughout the ridiculously fantastical scenes, there’s still a lot of humanity to Rocketman. Like Elton, underneath the pomp and circumstance, there’s a guy who just wants to be loved. Bernie Taupin (Jamie Bell), Elton’s long-time lyricists, brings a real heart to this grandiose fantasy musical, as their platonic relationship becomes something that holds Elton together throughout his adulthood. Their chance meeting is brushed over, written like record exec Dick James (Stephen Graham) had put them together when, in reality, the two met through an advert in the NME. The film also ignores how the personal lyrics Elton connects to his unloved childhood and sexuality were actually written by Bernie. 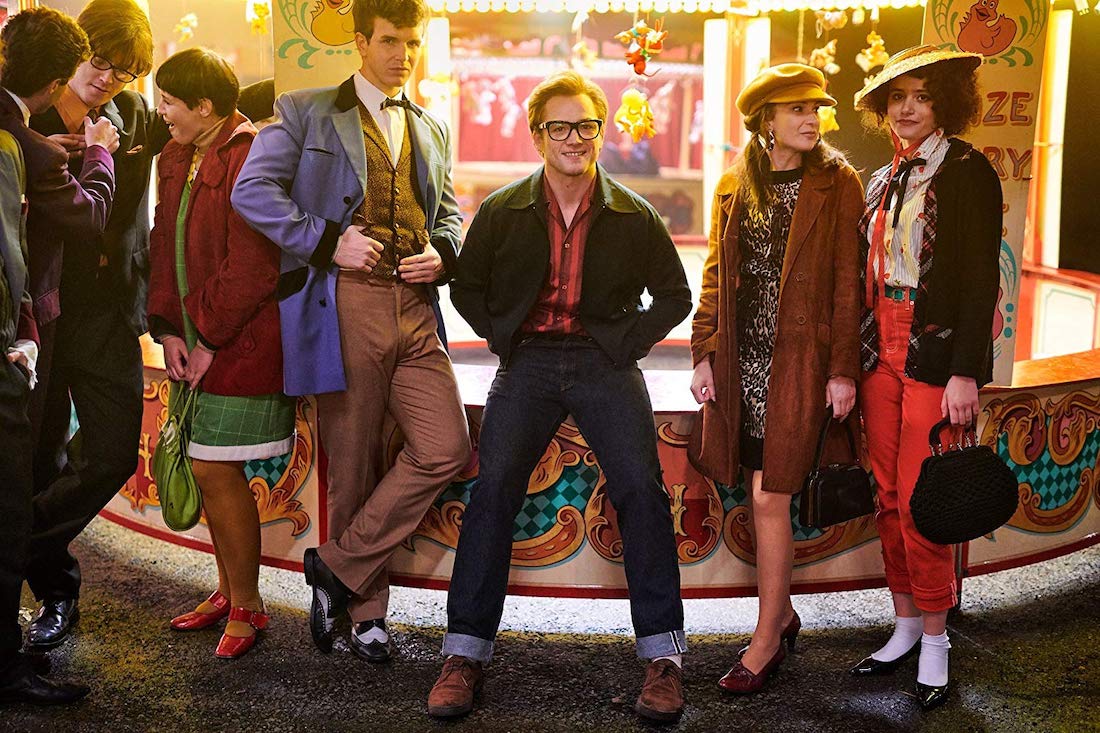 Rocketman labours under the strain of condensing an ongoing life and extensive musical back catalogue into a two-hour movie, so narratively it doesn’t always work… but it never stops being an enjoyable. Scenes are shoved together, never connected to a year and rarely given context, but this is probably how Elton hazily remember his past. The hit songs aren’t played in order (one of the earliest sung by a young Elton (Kit Connor) is “I Want Love” from 2001), but because this film isn’t a straight biopic told by a reliable narrator it can do whatever it wants with the facts.

Ultimately, Rocketman honours Elton John’s life without canonising him. It refuses to shy away from any aspect of his life, perfectly portraying his sexuality, depression, and egomania. The fantasy jukebox musical format helps eradicate the issues many biopics have in condensing a decade long career into just a few hours. Egerton’s performance carries the weight of the film, and any pressure about playing such a recognisable superstar isn’t noticeable. Together with Hall’s script and Fletcher’s direction, Rocketman is easily the best Elton John musical biopic it could be, and there’s very little extra one could want from it.

This isn’t just a must-see for any Elton John fan, it’s a solid viewing experience for casual toe-tappers of his music, those who appreciate a fun jukebox musical, and for anyone interested in the destructive personalities stardom attracts. Rocketman will, no doubt, be compared to Bohemian Rhapsody, but it’s more like Todd Haynes’ Velvet Goldmine (1998) in its grandiose toying with the truth.