Aaron Sorkin’s lauded for his screenwriting thanks to HBO’s The West Wing (1999–2006) and The Social Network (2010), but not every project he’s involved with goes to plan. Tolerances vary with his style, but few enjoyed Studio 60 on the Sunset Strip and The Newsroom. There’s sometimes a feeling that he uses characters as mouthpieces for his own ideologies, and there’s perhaps some truth to that.

In more recent times, perhaps this is why Sorkin’s mostly been adapt other people’s books. Many of them based on true stories, or memoirs, so he can inject his writerly skills onto events and “characters” he doesn’t have to create from scratch. Indeed, so far this century, Sorkin’s films have worked exclusively to that end, beginning with Charlie Wilson’s War (2007), then through onto The Social Network, Moneyball (2011), Steve Jobs (2015), and now Molly’s Game—based on Molly’s Game: The True Story of the 26-Year-Old Woman Behind the Most Exclusive, High-Stakes Underground Poker Game in the World. 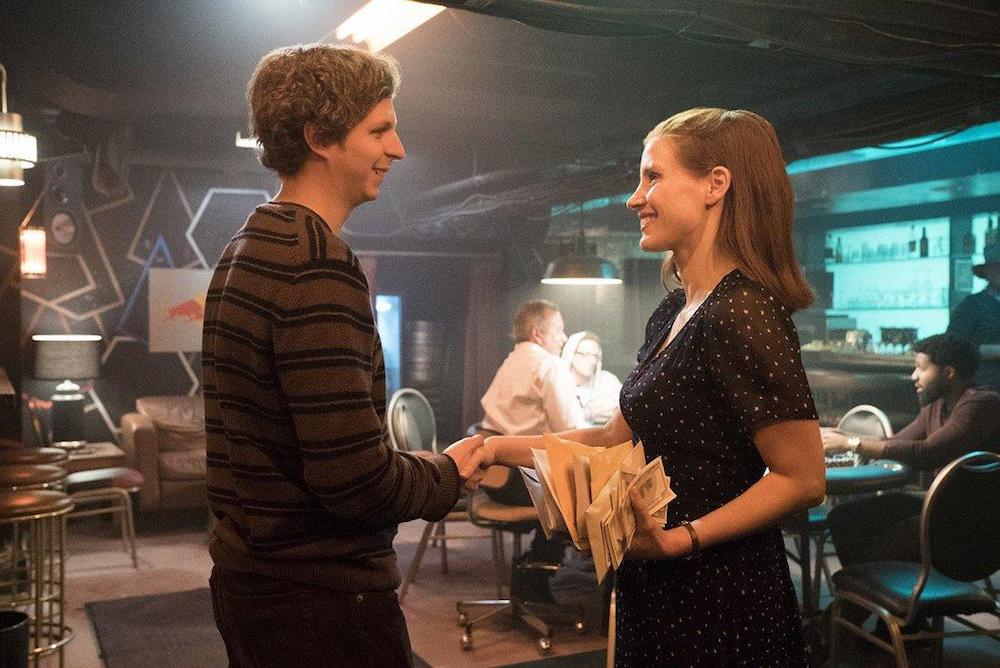 Molly Bloom (Jessica Chastain) was a talented freestyle skier destined for the Olympics, driven to greatness by her overbearing father (Kevin Costner), but whose promising career ends after an injury on the slopes in a 2002 Winter Olympics qualifier.

Her life now at a crossroads, Molly decides to move to L.A to become a waitress, where she meets a real estate developer who employs her as his office manager, which quickly leads her to help out at his high-stakes poker games. Molly takes an interest in gambling, earning a small fortune in tips from the actors, sports stars, and investment bankers that participate, before circumstances lead her to strike out on her own. And so she starts  running her own poker nights with an increasingly affluent clientele, drawn by the glamour of who’s often in attendance. And it’s not long before Molly’s at the helm of a multi-million underground poker empire, which inevitable comes crashing down around her ears once the Russian mafia sneak themselves onto the table…

This film marks Sorkin’s directorial debut, and it would be difficult to tell it’s the work of a “beginner”. It’s obviously much easier to direct something you wrote yourself, as writers have to think visually and Sorkin’s been around the filmmaking process for decades now, but it’s nevertheless a solid start. There are perhaps some moments when he overreaches, or the film resembles something made for television, but they’re few and far between. For the most part, Sorkin knows the story and its characters are the key to keeping audiences interest, so he largely stays out of the way of big players like Chastain (who was Golden Globe nominated), Idris Elba (as her lawyer Charlie Jaffey), Bill Camp (as ‘card sharp’ Harlan Eustice), and the aforementioned Kevin Costner. 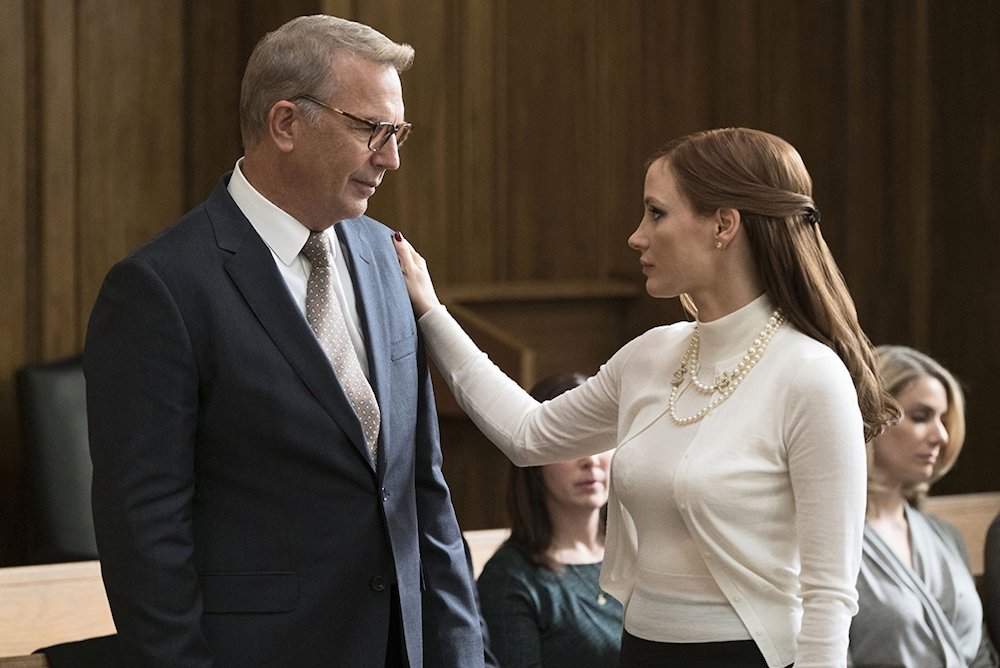 One thing that’s a mixed blessing for Sorkin is that everything he’s involved with has the same vibe, particularly how loquacious and fiercely intelligence all his characters are. And there’s nothing wrong with that, exactly, because he’s clearly drawn to smart people with interesting stories to tell, or big issues to tackle. But it does mean you could read exchanges of dialogue between various Sorkin characters, mix up their names, and it would be very difficult to get a sense of who’s who. And it just makes you wonder if Sorkin’s doing a great job at representing real people, like Molly Bloom, or if they become idealised versions of the kind of personalities he enjoys writing for.

However, the dialogue’s as rich and interesting as usual here, with the cast doing a great job delivering his polished lines. There are occasions when you’re taken out of the film’s reality, because nobody would genuinely talk this way, or have the presence of mind to respond so succinctly, but you just have to accept it’s the Sorkin way. Characters almost become super-human when it comes to communicating, and the actors do a decent job making it seems real. And one could argue this is why we go to the movies: to see a representation of life that gets rid of all the boring bits, and sharpens what remains into the best version it could be. 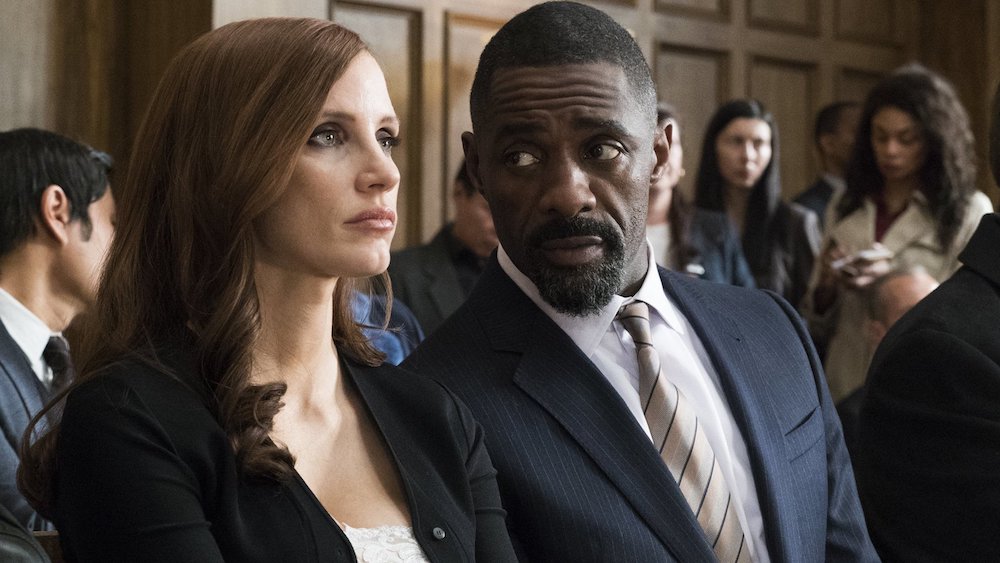 Chastain’s good as the eponymous heroine, although I hear it’s close to what she did in Miss Sloane (2016), which was compared to something Sorkin would have written. And if I’m honest, Chastain’s not exactly known for being a chameleon on screen. She seems to have a tendency to play tough and beautiful women, going right back to her breakout role in Zero Dark Thirty (2012), but acquits herself well every time. I enjoy watching her on film, and the fact she was 14 years older than the real Molly Bloom when this movie was released didn’t bother me. Although it might have taken on a different vibe with a younger actress, thrown into this crazy world. You do worry for Molly in a brutal scene when she’s visited at home by a large mobster, who proceeds to smash her head into a wall, but it would’ve played differently with an actress in her mid-20s.

No actor does badly here, but special mention must go to Kevin Costner. It’s great that he’s getting so much work recently, even if it’s mostly playing father figures, but he does it incredibly well. His character here is the cliched daddy who caused his little girl emotional distress through his ‘tough love’ stance on her upbringing, but there’s a scene when he explains his thinking to Molly now she’s an adult that brought tears to my eyes. It was actually the only scene in the film to do so, and had very little to do with the bigger picture story, which perhaps speaks to the emotional simplicity of ‘daddy issues’ trumping whatever glamorous story is being told at the forefront.

Molly’s Game tells a fascinating true life story with élan, so the 140-minute run time only dragged in a few instances towards the end. The quality of writing and committed performances keep everything on track, and it’s interesting to research the real facts afterwards—particularly who the enigmatic ‘Player X’ (Michael Cera) was in real life. The film actually makes it seem like Michael Cera was playing himself, but he was actually supposed to be Tobey Maguire… and the Spider-Man star was allegedly a colossal jerk (demanding Bloom hop on a table and bark like a seal for $1,000). It’s easy to see why Sorkin avoided naming the celebrities who participated in the Molly’s games, but it would’ve been fascinating if the likes of Leonard DiCaprio and Ben Affleck were actually there being played by lookalikes… 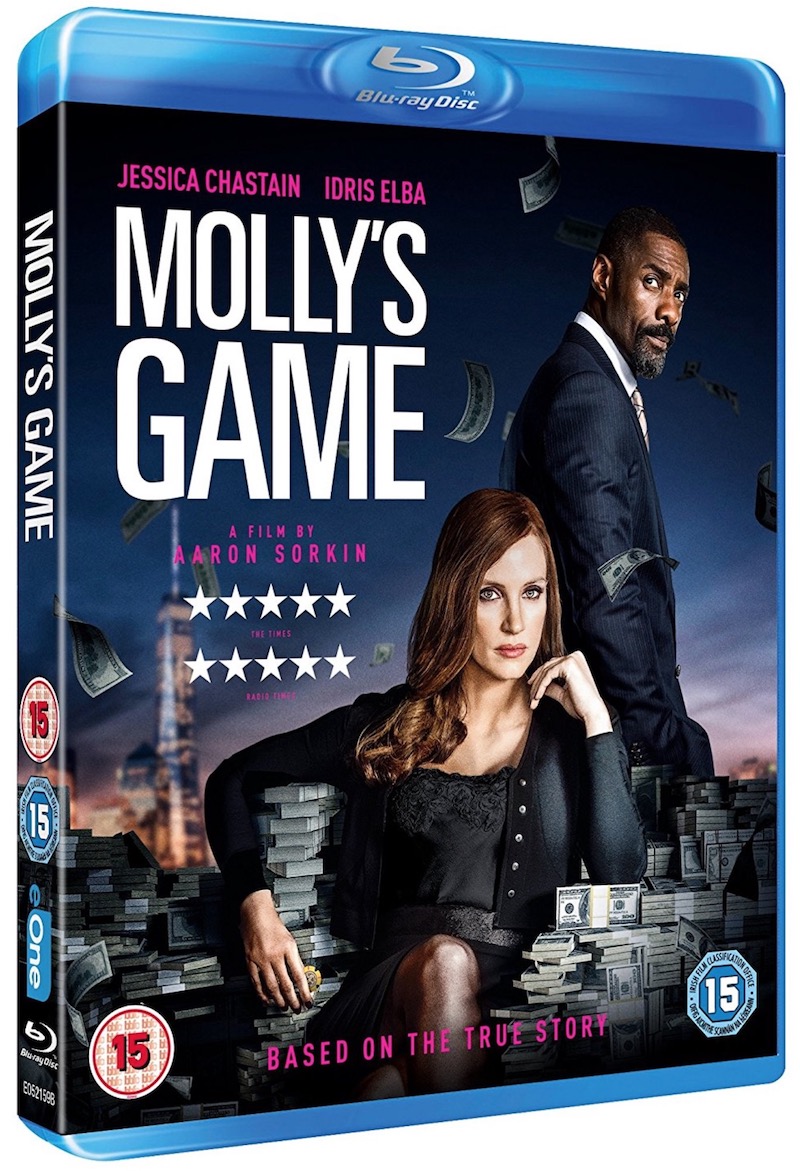 A digitally shot movie, Molly’s Game is crisp and detailed for the most part, with only occasion instances of noise and banding. The skin tones are very natural and while the 2.40:1 image isn’t a true feast for the eyes, the clarity and colour saturation are enjoyable and won’t disappoint. The DTA Master Audio 7.1 sound mix is decent, although obvious this is a dialogue-heavy movie that won’t be giving your speakers a full workout. But there’s good use of the rears to envelop you in the atmosphere of every scene, particularly the skiing sequences and poker games.