There had been movies about computer hacking before 1995, most famously in John Badham’s Cold War classic WarGames (1983), where Matthew Broderick almost triggered World War III after hacking a supercomputer to “play a game” of intercontinental nuclear armageddon, but Iain Softley’s Hackers is more interesting for being released at the brink of the Internet Age. It seems crazy now, but this movie was released barely a month after Windows 95 debuted. 1995 doesn’t seem that long ago, but 23 years has been an ice age in technological terms.

Hackers concerns Dade “Zero Cool” Murphy (Jonny Lee Miller), who was banned as an 11-year-old from using computers after he crashed 1,507 computers and caused the New York Stock Exchange to drop seven points in 1988. Seven years later, Dade’s ban is lifted and he immediately resumes criminal activities online and draws the attention of another “elite” hacker called “Acid Burn”, forcing him to adopt a less-famous alias—“Crash Override”. This rival whizz turns out to be the beautiful Kate Libby (Angelina Jolie), one of many computer “nerds” at Dade’s new high school—such as Ramon “The Phantom Phreak” Sanchez (Renoly Santiago), Emmanuel “Cereal Killer” Goldstein (Matthew Lillard, pre-Scream), Paul “Lord Nikon” Cook (Laurence Mason), and the alias-less Joey Pardella (Jesse Bradford). I put the word “nerd” in quotes because Hackers was also one of the first movies I remember where high school students who liked computers didn’t all have thick glasses and acne. No, these ones had “cool” (for the time) clothes and hairstyles, and you’d actually want to sleep with them. 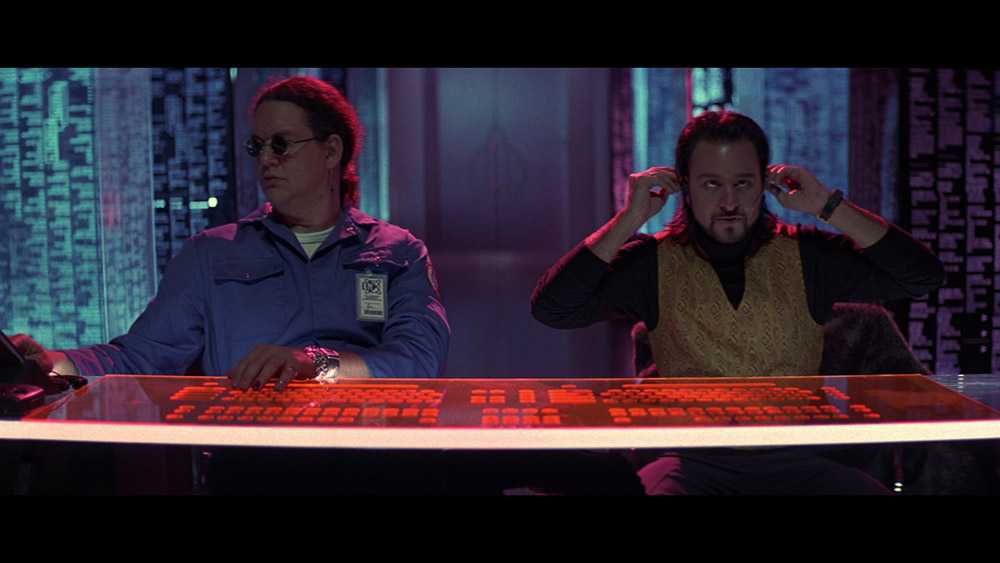 It’s keen up-and-comer Joey who puts the story into a serious footing, after trying to prove himself by hacking into ‘The Gibson’, a supercomputer used by the Ellingson Mineral Company, protected by suave security officer Eugene “The Plague” Belford (Fisher Stevens). Joey manages to download a fragmented ‘garbage file’ onto a floppy disc, which unwittingly contains proof Eugene was defrauding the company with a ‘worm’ program—that amusingly echoes the villain’s plan in Superman III (1983) by creaming off micropayments from the company’s accounts. In an attempt to cover his own ass, The Plague tries to frame the hackers for a “Da Vinci” virus he’s written and released, which will capsize the company’s fleet of oil tankers, putting them in the crosshairs of the US Secret Service and “hacker enemy number one” Agent Richard Gill (Wendell Pierce, pre-The Wire). 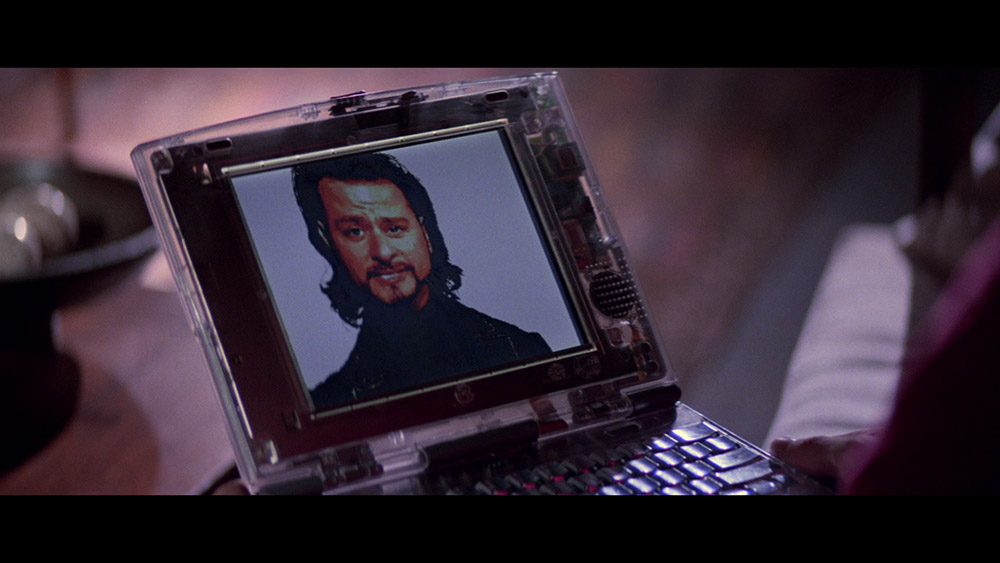 Released on 15 September 1995, Hackers received mixed reviews and only clawed back $7.5M at the US box office, against its $20M budget. It was clearly too ahead of its time, as much of the movie’s content must have appeared extremely fanciful, at best, or outright bewildering at worst. A lot of people didn’t have the internet, certainly didn’t e-mail or “go online” even at work, and there just wasn’t much public awareness of what computers could do. It’s true that director Iain Softley’s attempt to make hacking look cool and cinematic gave it an added element of strangeness, and perhaps ruffled feathers in the real hacking communities of the day (as real hacking isn’t as visual or exciting in that sense), but it’s understandable how you’d have to bend reality to make anything look fun and appealing. So yes, every mainframe is conceptualised as three-dimensional skyscrapers atop a motherboard pulsing with ‘streets’ of data, and when people are furiously hacking in a phone booth they appear to be on a spinning wheel. 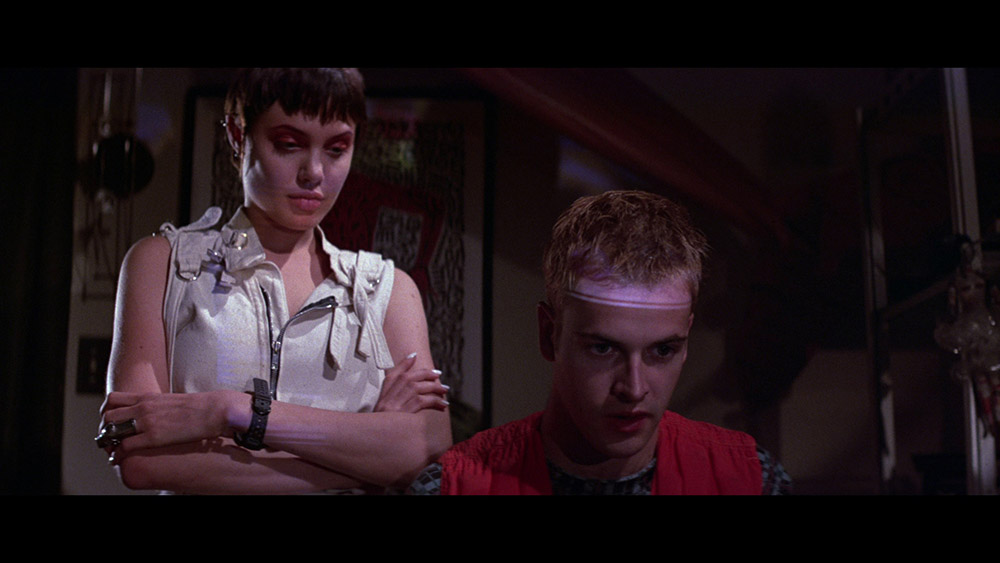 Today, the likes of TV’s Mr Robot do a better job dramatising hacking in a visual way that doesn’t sacrifice too much realism, but we live in a very different culture where high-speed internet has become as essential as gas and electric. I’m tolerant of the bad fashions and tech silliness surrounding Hackers, as it’s both an amusingly naive time capsule of ’95 and part of the reason the film later achieved cult status. And besides, having read more about Hackers and its influence in decades later, I was surprised to learn that the fundamentals of what’s being done are actually very plausible. It’s nowhere near as ludicrous as other movies about hacking, it just chooses to show things in a very OTT manner, dressed in a style and attitude that now prompt laughs. One classic is when The Plague literally skateboards down a city street, holding onto his limousine to grab a floppy disc from Dade’s hand—when he could easily have just pulled up in the car and wound down the window to take it. But where’s the cheesy fun in taking the sensible option? 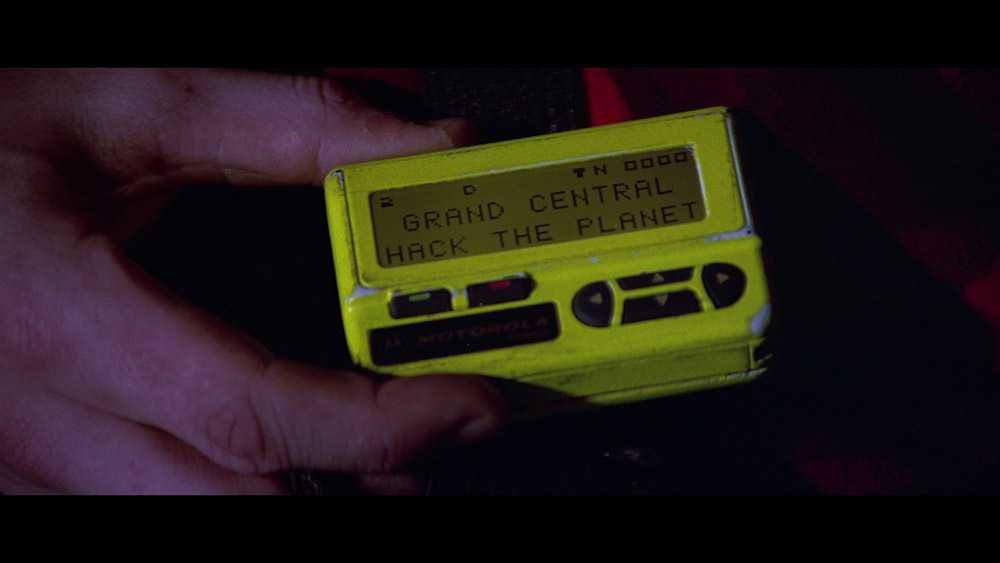 Rafael Moreu wrote the screenplay after taking an interest in the subject matter during the 1980s and later meeting 22-year-old hacker Mark “Phiber Optic” Abene at an event organised by popular tech magazine 2600: The Hacker Quarterly (whose editor, Emmanuel Goldstein, Lillard’s character is the namesake, and is himself named in homage to a character from Nineteen Eighty-Four). After being told interesting real-life stories by the people there, Moreau realised hacking culture was ready to become cinematic and his script was sold. Iain Softley, fresh off his Beatles biopic Backbeat (1994), was hired to direct the movie and started casting.

After auditioning the likes of Hilary Swank (fresh from The Next Karate Kid), Heather Graham and Liv Tyler, Katherine Heigl was offered the part of Kate Libby but was already committed to Under Siege 2: Dark Territory (1995). Angelina Jolie thus got the part, her first Hollywood movie after Cyborg 2 (1993) and Without Evidence (1995). Like most of the other actors involved, apart from 16-year-old Jesse Bradford, 20-year-old Jolie was slightly too old to play a high school student, as Jonny Lee Miller was 23 and Matthew Lillard 25 at the time of filming. Everyone bonded by spending three weeks learning how to type and rollerblade, while also hanging out with real hackers at their monthly get-togethers. Miller and Jolie grew particularly close while filming Hackers, marrying in 1996 until divorcing four years later in 2000. 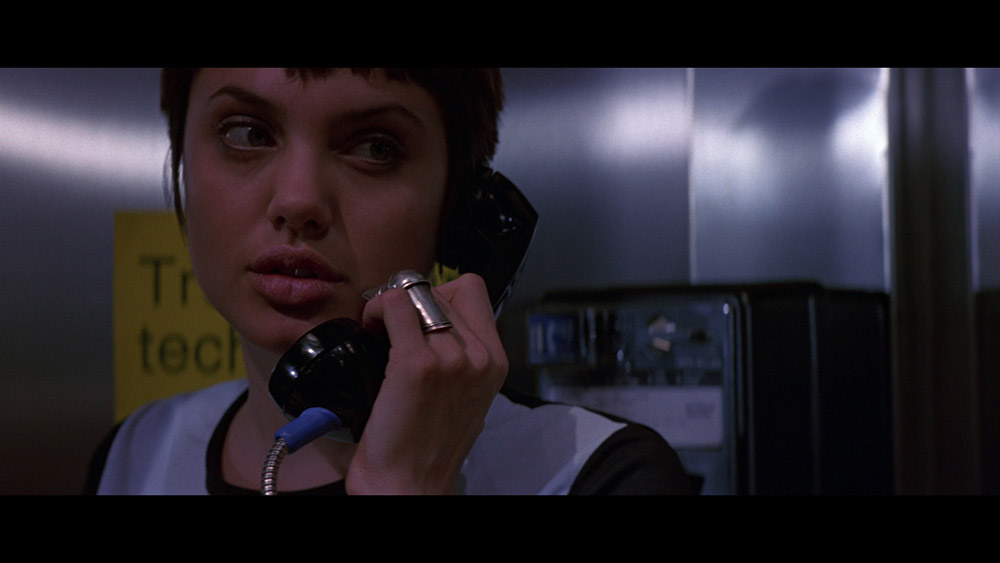 While it certainly didn’t have the same impact, I can’t help putting Hackers into the same mid-1990s melting pot as Trainspotting (1996). Maybe it’s because Jonny Lee Miller appears in both those movies, but both are also the work of English filmmakers trying to make countercultures (hackers, junkies) “accessible” to the mainstream through visual flair and contemporary needle drops. The Prodigy’s “Voodoo People” is played frequently throughout and has become just as synonymous with Hackers as Iggy Pop’s “Lust for Life” has with Trainspotting. Softley isn’t as talented as Danny Boyle behind a camera, of course, wasn’t working from a bestselling novel, and didn’t have a concept and characters that are inherently dramatic and comprehensible to filmgoers of the time. But yeah, they both have bangin’ mid-’90s soundtracks. 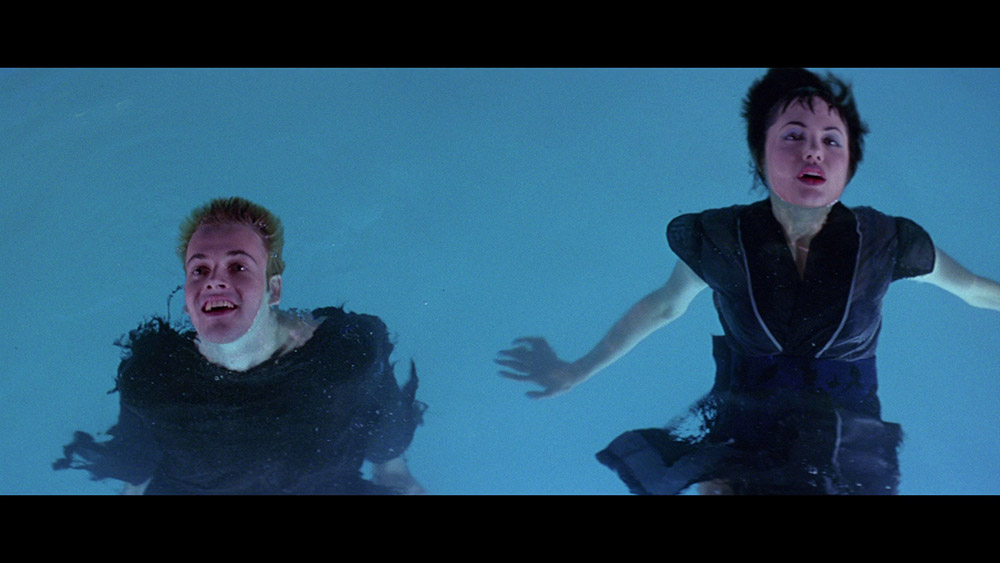 While it’s true Hackers can be considered hilariously bad at times, as so much of the fashion, lingo, and technology has dated (one hacker pleads to be given a “handle” like it’s a title bestowed on someone from a genial monarch), this movie’s a lot of fun. And it’s lingered in the memory more than The Net, Virtuosity, and Johnny Mneumonic—which all came out the same year, signalling that Hollywood knew what was right around the corner. Maybe that’s because it has a sense of fun about it, and these characters are all very likeable—even Lillard, at his most Lillard-y (including Scream).

It also helps that they’re teenagers, and I was roughly the age these characters are supposed to be, so remember the strange proto-Internet world of the 1990s—when “going online” was a puzzling term, computers only came in ‘bulky beige’, and popular websites like Google and eBay didn’t exist. And yet, this whole new virtual world was about to open up, and my generation was at the cusp of it. It’s oddly comforting to look back and see a movie try to sell this idea to audiences, by exaggerating what was possible at the time and therefore creating a bizarre “near-future” that never quite happened. Or at least I don’t remember rollerblading indoors and handing out the UNIX Bible to my school friends.