Bob Balaban began his career as an actor, working on critically acclaimed movies such as Close Encounters of the Third Kind (1977) and Altered States (1980). He also guest-starred in Friends as Phoebe’s real feather. Balaban had the privilege to work with some of the greatest minds in Hollywood and, while doing so, picked up the knowledge and experience he needed to take a seat in the director’s chair himself.

Balban wrote and directed several episodes oGeorge Romero’s Tales From the Darkside (1983-88), Steven Spielberg’s Amazing Stories (1985-87), and The Twilight Zone (1985-89) remake. His often haunting episodes dripped with unease, but Balaban’s stories generally injected a streak of black humour which them palatable. He channelled everything he learned from TV into his movie debut, the supremely weird and underrated Parents. Drawing on David Lynch’s Blue Velvet (1986) and 1950s sci-fi paranoias like Invaders from Mars (1953) and Invasion of the Body Snatchers (1979), Parents is a horror-comedy that peers into the darker aspects of 1950s suburban America. 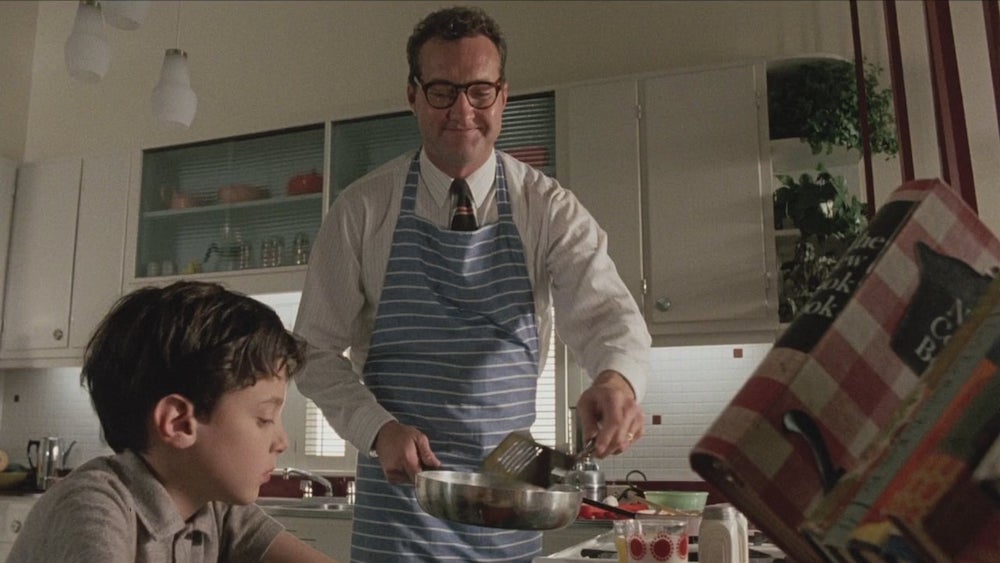 Michael Laemle (Bryan Madorsky) is a young boy in a typical ’50s suburban neighbourhood, who has bizarre and horrific nightmares together with a general unease around his parents—especially father Nick Laemle (Randy Quaid). With a suspicious amount of “leftovers” being cooked up in the kitchen by mother Lilly (Mary Beth Hurt), young Michael begins to suspects his parents are cooking more than just hamburgers on the grill. Having trouble explaining his fears to his new friends or the school social worker, is Michael’s imagination running wild or does he have a reason to be scared?

Quaid (Kingpin) is perfect as the patriarch and becomes increasingly sinister throughout, playing Nick with a “father knows best” exterior that masks a creepier personality underneath. His horn-rimmed glasses and business suits can’t disguise his predatory quality. Quaid delivers his dialogue perfectly, using simmering anger and intimidation as a means of controlling his child. Mary Beth Hurt (Compromising Positions) is a fine compliment as his wife, with an old-fashioned hairdo and clothes from a Stepford Wife’s wardrobe. Lilly loves her family dearly and is constantly cooking “leftovers” for dinner, but behind her fake smiles is a woman on the edge who’s desperately trying to hold everything together. Owl-faced Madorsky also does well in his one and only film role, playing Micheal as a shy and awkward kid with an overactive imagination. His line readings come across as genuinely creepy when needed, especially when talking about putting a cat in the oven. 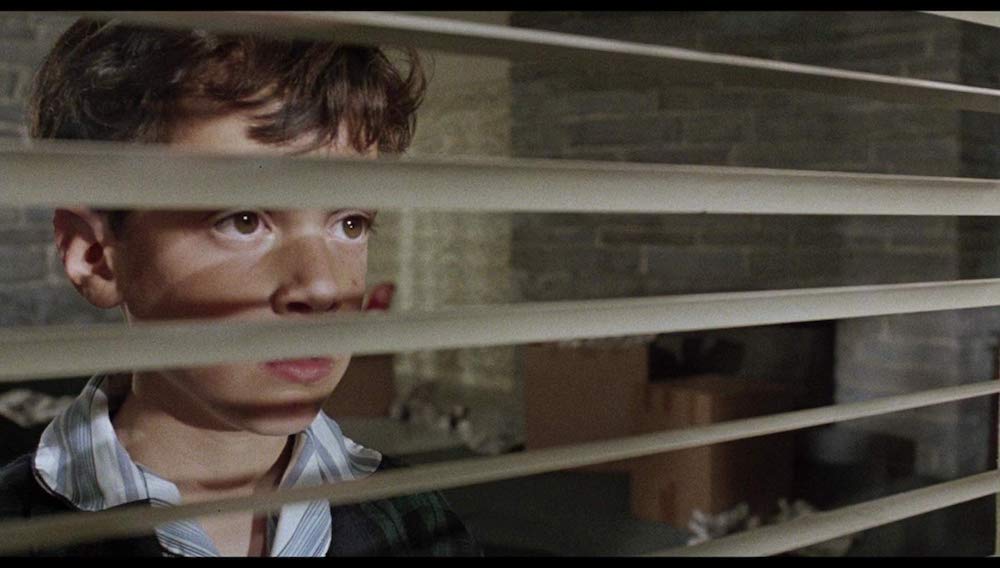 There had been several black comedies about cannibalism prior to the release of Parents, such as Motel Hell (1979) and Eating Raoul (1982), but those are cartoonish and neither go as dark as this. On the surface, it’s a horror-comedy, but underneath the satire of the American Dream, you’re never sure if events are a childish nightmare or a terrible reality. When Michael catches his parents in the middle of a sexual act, the scene shifts to them rolling around in blood and flesh to elicit even more nightmares! But as Micheal’s psychologist (Sandy Dennis) becomes concerned over his behaviour, the evidence piles up against him being a disturbed child.

Parents looks very striking thanks to the work of cinematographers Ernest Day and Robin Vidgeon. And there are some incredible camera tricks that are all the more impressive in a pre-digital age. One scene involves the camera pulling back through the family’s basement, continuing to retreat backwards through an air vent that eventually leads above the house. In the Blu-ray commentary, it’s explained this was achieved thanks to clever editing along with cardboard boxes. A dinner table interrogation of Bryan by his parents also has Balaban mount the furniture on a carousel, so the room can slowly spin in the background and makes the scene look very unsettling. 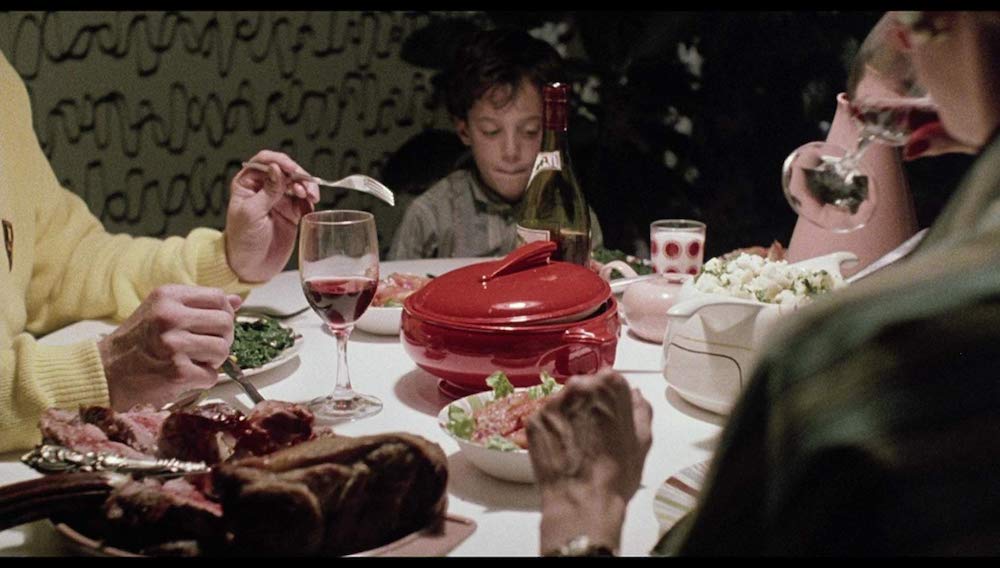 Parents received poor reviews when released in 1989 but developed a cult following. Had it been released several years later it may have fared better with critics. The aesthetic and thematic similarities to Twin Peaks are prominent throughout and, although they both went into production simultaneously, Bryan’s dream sequences and use of slow-motion feel like they’ve been lifted directly from Lynch’s cult TV hit. Balaban has even hired Lynch’s regular composer Angelo Badalamenti to score the movie’s nightmarish moments, so it’s easy to expect a slice of cherry pie to appear instead of a slab of human meat.

The main criticism of Parents is the lack of momentum within the narrative. The atmosphere and build up are fantastically handled, but the plot never progresses quick enough. Christopher Hawthorne’s script never finds the true satirical potential of the story either. Thankfully, a mix of interesting characters and excellent directorial flourishes prevent Parents from becoming a boring experience. Balaban continued to direct several episodes of short-lived children’s horror series Eerie, Indiana (1991-92) and, in retrospect, Parents’ narrative would’ve flowed easier has it been an episode of television. That said, its frantic climax is worth the wait and Parents is definitely a movie that rewards you for giving it time to unfold.

This is a smartly made, well-acted film where most of the horror comes from the psychological tension generated between a sweet child and his weird parents. There’s plenty of yucky gore but the comedy itself is very dry. Released during the height of politically-aware paranoid social horrors like They Live (1988) and Society (1989), Parents doesn’t leave as memorable an impression. Its conflicting narrative loses its way in the middle, never sure if it wants to be defined as horror, comedy, or a coming of age movie. It’s not for everyone, but it might be for you. 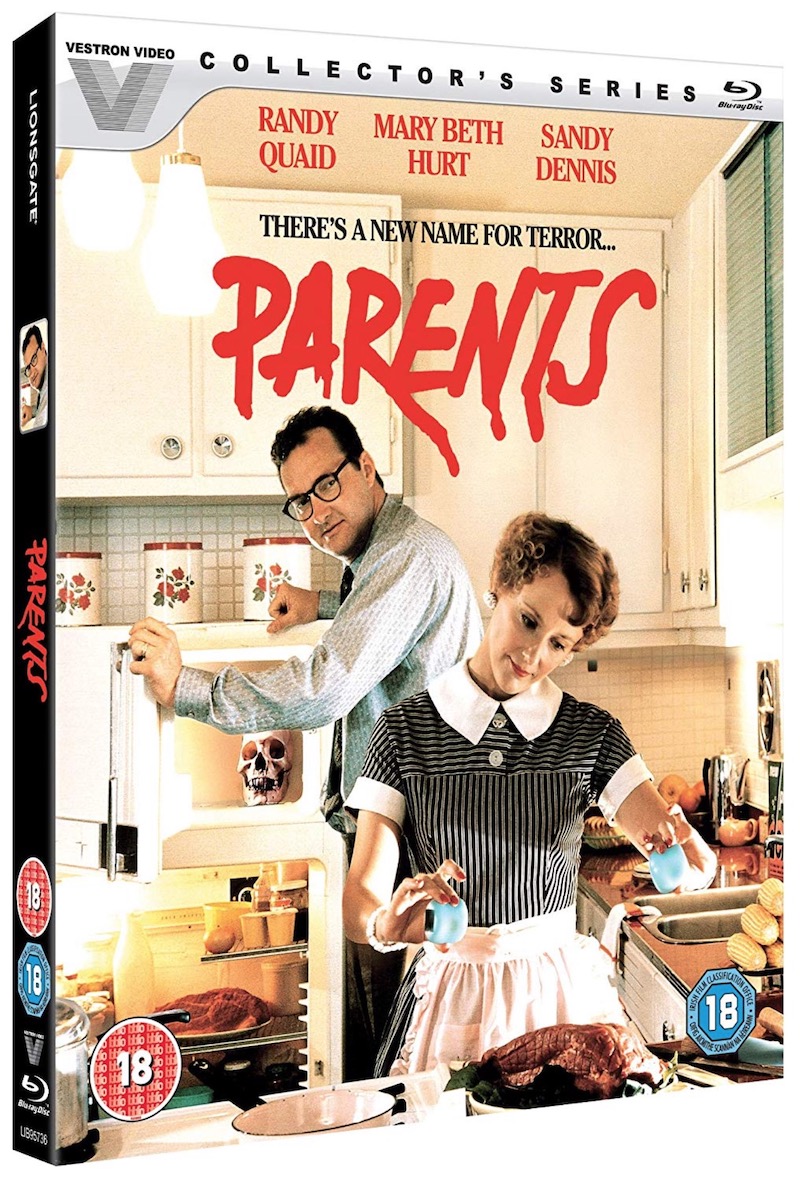 Parents is presented on Blu-ray courtesy of Lionsgate’s imprint Vestron Video. The AVC encoded 1080p transfer is impressive considering the source material but does fall short in several areas. The vivid reds and blues look wonderful, but it’s the precision of light and shadow that give interior shots an extra level of dread. The clarity and sharpness of the picture are often compromised due to film grain, so while several sequences look crisp others feel soft and ill-defined. Close-ups work very well and reveal commendable fine details especially in the 1950s fabrics, as you can see each frayed bit of cotton on Micheal’s shirt.

Parents boasts an excellent DTS-HD Master Audio 2.0 soundtrack, with a stereo soundstage that comes to life whenever Angelo Badalamenti score is dominating the channels. The sound effects are great, too, particularly the sound of meat being ground in a mincer. The bulk of the movie’s audio comes from the dialogue, and while several exchanges were difficult to hear it’s nothing to yank audiences out of the movie.

The 30th anniversary of Parents comes with a slew of extra features from Vestron, too: