First Man is a worthy but wearisome biopic about Neil Armstrong and the Apollo 11 Moon landing on 20 July 1969. Damien Chazelle reunites with his La La Land (2016) leading man, Ryan Gosling, for a biopic that begins eight years before the famous mission, and recounts the many tragedies that shaped Armstrong and fuelled his ambition to set foot on the lunar surface.

We open in 1961 when Armstrong was working as a fighter jet test pilot hitting record-breaking heights. His wife Janet (Claire Foy) is left behind on terra firma while her husband’s head is in the stars, caring for their daughter while receiving treatment for a malignant tumour. When their daughter dies, instead of mourning Neil goes straight back to work and never speaking of their child again. Skipping the cradle to grave narrative to focus on the foremost tragedy that defined a legend is slowly becoming a tired biopic cliché. 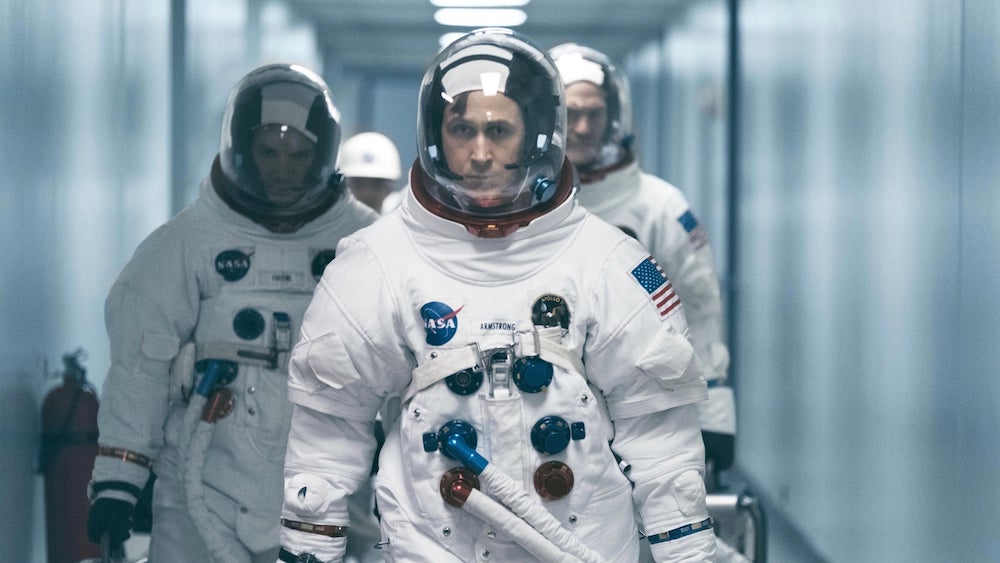 Gosling is perfect as Armstrong; a man whose thoughts are in the heavens in order to avoid emotions closer to home, literally leaving Earth to avoid painful memories. Gosling’s emotionless hero may be an accurate portrayal, but it doesn’t result in the most engaging of leading men. Too much of First Man falls at the feet of Gosling, whose stone-faced stoicism as Neil Armstrong doesn’t work as it has in previous work. Cinematographer (Linus Sandgren) is greatly concerned with framing Gosling alone in the darkness of his own home, using handheld 16mm for up-close-and-personal shots, switching to 35mm for the cold NASA scenes, then 65mm for the expansive nothingness of space.

Neil moves his wife and two sons to Houston, Texas, after being offered a role in the Gemini Project, and the film details many training sessions, test flights, and scientific discoveries which lead to him eventually walking on the Moon. Unless you’re a huge fan of space and the science behind NASA’s work, these scenes soon become wearisome. The only engaging one is when we see Gosling taking spins in the muti-axe trainer (look away if you easily feel queasy), as the rest is very mechanical and too concerned about feeling authentic rather than engaging. 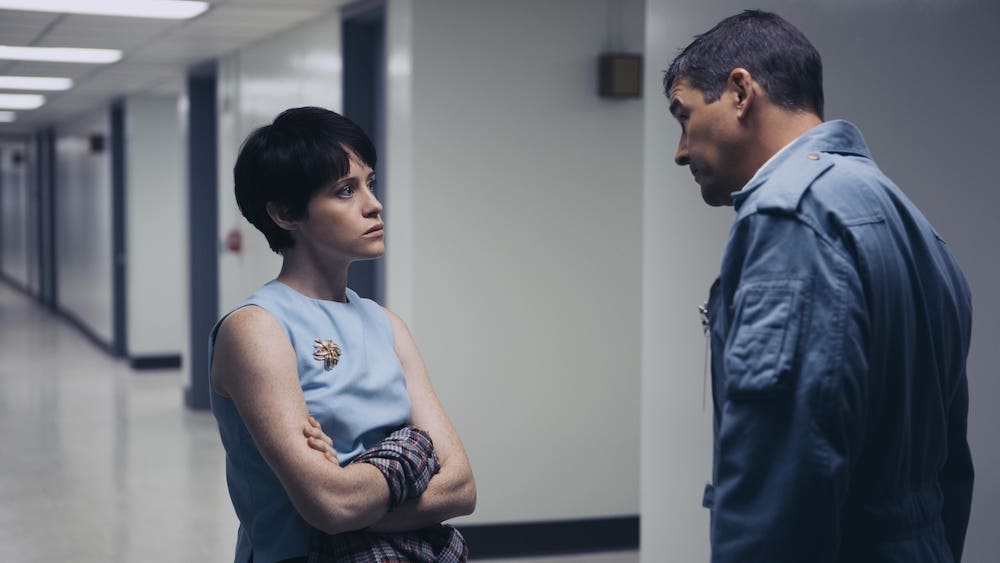 Slightly more enjoyable to watch are the scenes where Neil splits a beer with his fellow astronaut neighbour (Jason Clarke), attends a series of funerals for those whose Gemini flights don’t go to plan, and enjoys family dinners. Every shot of suburban life feels cold and artificial, Armstrong’s never being present in the moment. These scenes perfectly encapsulate how Armstrong feels when he’s not working: dreary, unimportant, and lifeless.

The supporting cast, including Kyle Chandler (Game Night), Ciaran Hinds (The Debt), Corey Stoll (House of Cards), Christopher Abbott (The Sinner), Ethan Embry (Grace and Frankie), and Patrick Fugit (Almost Famous), are all strong but are mere background figures and never get the same chance to develop personalities. Foy gets little to do as Janet but what she does do is scene-stealing. Playing a housewife holding herself together after a terrible tragedy, there’s so much more to her story than First Man digs into.

Chazelle and screenwriter Josh Singer (Spotlight) are so committed to showing Neil Armstrong’s emotionless perspective that they forget that the audience needs something to cling onto. Armstrong may have been an introverted person, but he has no personality in the script, and there’s never any idiosyncrasies and passion from Gosling. More than a third of its runtime is frustratingly dedicated to mimicking the repressed and detached psyche of Armstrong, and at times it can be hard work. Chazelle and Singer couldn’t find a character arc for the great man, other than he makes it to the Moon and then comes home again. 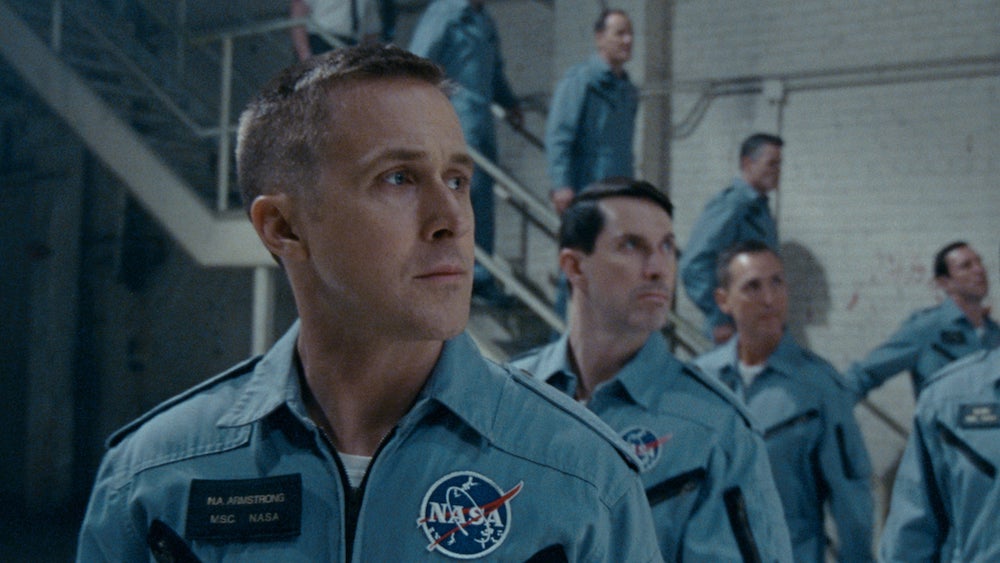 But what First Man desperately lacks in emotions it compensates for in spectacle. This is a film that manages to capture the vast expanse and true terror of space travel. Chazelle’s camera places the audience inside many claustrophobic spaces alongside the astronauts, with tight framing and shots peering out of tiny windows. He has a stunning ability to manipulate the camera, seamlessly weaving in archival footage and audio, making you feel like you’re physically experiencing this event first-hand. It’s hard to find faults in the visuals, as it’s incredible in every department – from the period-accurate clothing to the climactic Moon landing sequence. You completely believe every single moment of that lunar landing. It’s a shame The Academy overlooked First Man in many categories, as its technical achievements are so good you barely notice them.

The life story of Neil Armstrong holds few surprises and delivers even less tension. Not everyone will know the details of the Apollo missions or know about the loss of their daughter, it’s true, but we know how this story ends. Chazelle believes Armstrong’s personal journey is more important than his physical feat. The problem here is that the film’s so long that a tedious performance doesn’t offer you enough to stick with it, which is exacerbated by knowing where we’re headed in the final moments.

The stunning VFX never quite overcome a flat script. At 141-minutes, for a film about a man with his head in the stars, First Man never quite makes it off the ground. 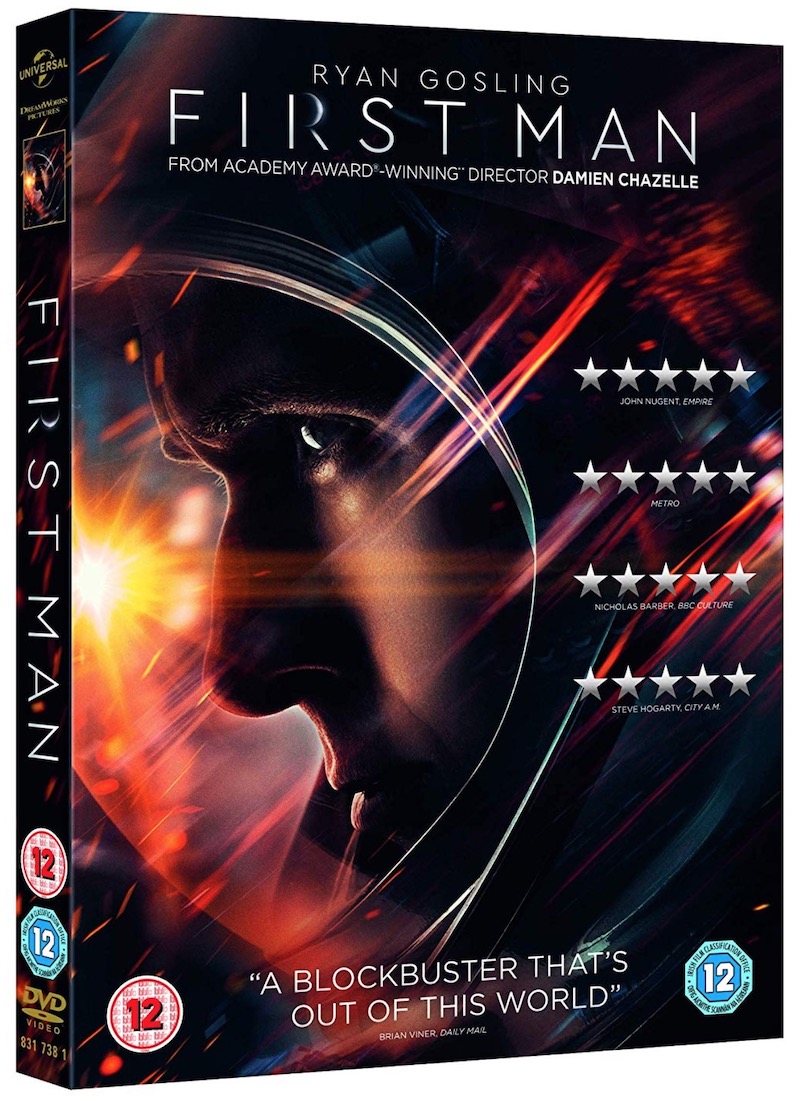