Dinner parties. They don’t always go according to plan, and some of your guests never quite hit it off. Was it such a good idea to invite them in the first place? Claire (Caitriona Balfe) is certainly wondering why she bothered at the end of Outlander’s latest episode, “La Dame Blanche”. But before we get to the entrée let’s sample the hors d’œuvres of what turns out to be an episode full of intrigue, shocks and surprises.

During a chess game with Duverney (Marc Duret), where Jamie (Sam Heughan) and Claire discuss names for their child, the villainous Comte St. Germain (Stanley Weber, oozing malicious intent) sticks his nose into their affairs and rather pointedly assesses the game: “the outcome is so terribly obvious that I do not see the point of watching the rest”. He brings to our attention that we’re witnessing the tragically inevitable—both the already doomed attempt to stymie the Jacobite rebellion, and Claire becoming the target of the Comte’s sly revenge. It’s clearly a declaration of war and the first round goes to the Comte, poisoning Claire’s drink with the bitter cascara Master Raymond (Dominique Piñon) sells from his shop. The gloves are off and it’s time to fight dirty. 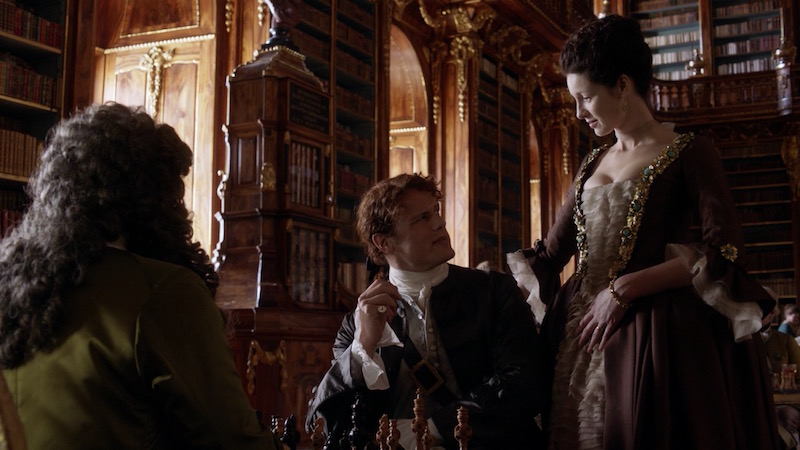 Claire’s brush with death and her perceived vulnerability pushes the story purposefully toward her revelation to Jamie that ‘Black Jack’ Randall is alive. After Duverney reveals that it seems King Louis is likely to support Charles Stuart’s (Andrew Gower) bid for the throne, Jamie and Claire must find another way to discredit the Young Pretender. When Jamie suggests a dinner in honour of the Duke of Sandringham (Simon Callow, enjoying himself with a fruity performance) to expose Charles Stuart as the “delusional popinjay that he is”, Claire realises she can no longer keep the news from him.

Her despair at what might happen if Jamie and Sandringham meet again finally reaches a tipping point. The power of this scene lies in the completely unexpected way Jamie reacts. The audience (and Claire) expects him to explode with anger and get on the first ship back to Scotland, but we rather underestimate Jamie’s character. He knows it would be stupid to pursue Randall on his home turf, but he’s euphoric because he now has a task to focus on— a chance to see Randall die at his hand—that lifts a burden from his shoulders. It offers a balm to his trauma and provides a way for him to reconnect with Claire emotionally and sexually. Balfe and Heughan wrong-foot the audience with their skilful performances, but one is left with a sense of doubt when Murtagh’s (Duncan Lacroix) cautious response to Jamie’s joy is considered. Is Jamie simply putting on a brave face? 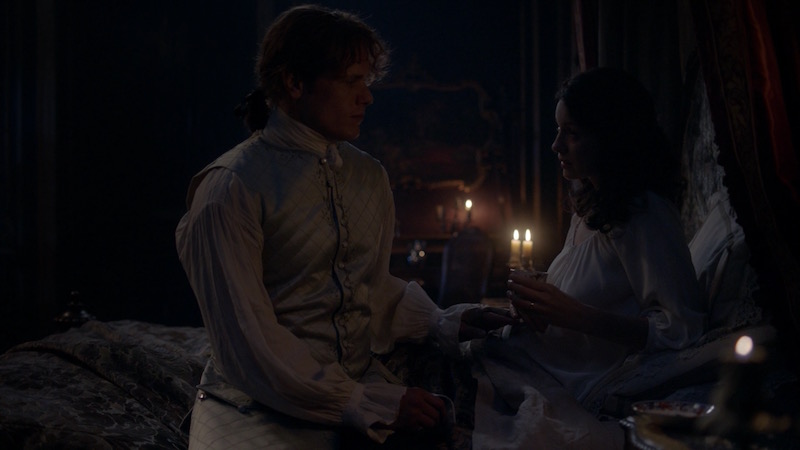 Master Raymond continues to develop as an intriguing character. Here’s a man who knows much more than he’s letting on. He has an uncanny ability to get the measure of Claire, recognising in her the sense she is out of time, both as a woman not of this era and fast approaching the irreversible tragedy of Culloden. He predicts from the roll of the sheep’s knuckles that she’ll see Frank again, and it leaves her intrigued that she might at some point get back to her own time. Again, the audience has already seen it happen, and this is another development toward the events of “Through A Glass, Darkly“. But just who or what is Master Raymond with his dinosaur skulls, divination and ‘magic’ pendants that detect the presence of poison? Perhaps “the bones will give us an answer”?

Jamie and Claire’s sexual relationship is restored through a circuitous but pertinent route. Claire has been taken into Louise de la Tour’s (Claire Sermonne) confidence. She’s expecting a child out of wedlock and seeks Claire’s advice on abortion. Claire, mindful of the lack of effective medicines and procedures, persuades her not to risk poisoning herself and her unborn child. Louise could convince her husband Jules the child is his and, foreshadowing her own situation with Frank in the future, Claire believes “all that matters is that the child is brought up with love.” The scene not only adds some sensitivity to the character of Louise and explores a relevant social theme but it also cleverly alludes to later revelations about Louise’s lover. 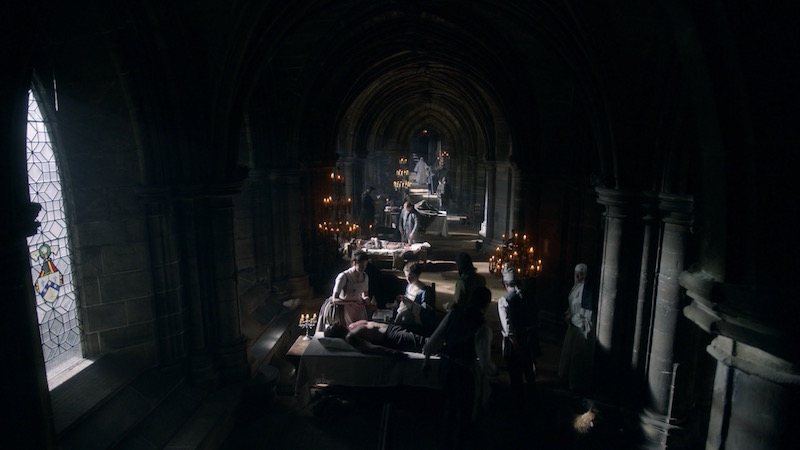 Jamie’s ‘adventure’ with another woman (she likes biting his thighs apparently) initially horrifies Claire. His alleged infidelity enrages her even though Jamie attempts to explain that he was responding to his renewed libido and “starting to feel like a man again”. At cross purposes in their arguments, attempting and failing to articulate their sexual anxieties and fears, they both end up in separate rooms. These infidelities also gain further reflection in the later scene between Murtagh and Fergus as they discuss Mary Hawkins (Rosie Day) and her love for Alex Randall (Laurence Dobiesz), despite her impending arranged marriage to the Vicomte Marigny (Ian Bustard).

Again, it’s one of the hallmarks of Outlander’‘s approach to characters, allowing space for them to be intimate about their feelings, to give colour to the gear changes in character development and plot. This is nowhere better expressed than in their later contrition as Claire comes to Jamie in the moonlit depths of his room as a storm breaks. The striking blue lighting enhances a key scene where both finally gain freedom from the prison of the self, from trying to “hide under a blade of grass”. 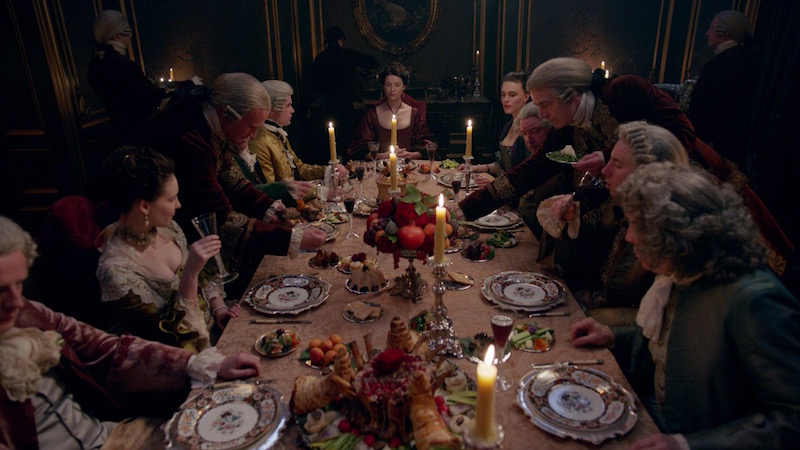 Claire and Jamie discover that Charles Stuart, who drops in on them unannounced from his stumble across their roof, is Louise’s lover. This information is deemed ripe for exploitation at the forthcoming dinner and a perfect way to bring the said parties together and wind Charles up into such a state that Sandringham will have second thoughts about supporting him. Claire and Jamie question their own methods, reasoning that they’re not bad people for using the affair to their advantage. “We’re doing a bad thing but for a good reason,” reckons Jamie.

And so on to that dinner. Claire, Mary and Murtagh are forced to walk back from the hospital after helping out with the survivors of an explosion when they discover their carriage is out of action. This delays Claire’s arrival at the dinner but it also returns us to the darker aspect of Outlander’s focus on sexual fantasy and violence. The innocent Mary Hawkins, having admitted her attraction to Alex, is attacked and raped in the street. The assault is only curtailed when the perpetrators recognise Claire as the feared ‘La Dame Blanche’ and, for reasons we’ve yet to discover, retreat from the scene. 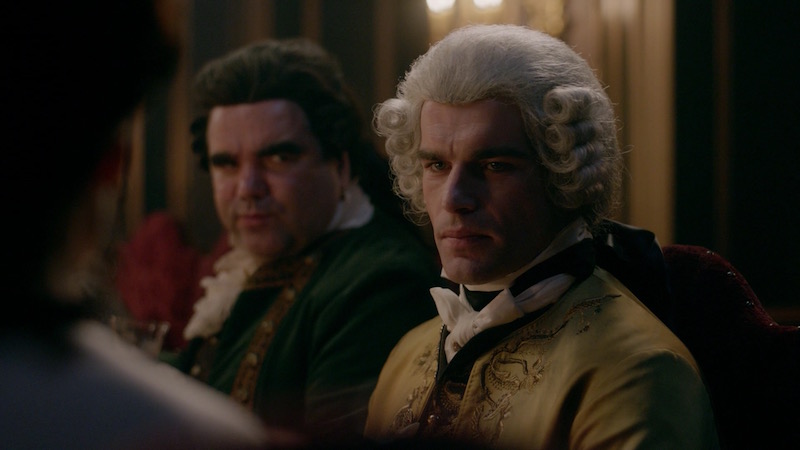 It isn’t exploitative or gratuitous, but it’s also not pleasant viewing, and remains as the most distressing moment in the episode. Director Douglas Mackinnon intercuts the depravity of the street attack with the gathering of the guests for the dinner; each world offering its own expression of assault, with the barbed dinner table gossip and mutual distrust of the privileged in counterpoint to raw, unwarranted sexual violence of the back streets.

Jamie and Claire’s scheming—the embarrassing bombshells about Louise’s pregnancy being dropped into the dinner conversation for Charles Stuart to fulminate about—is nothing to the probability that the Comte St. Germain, glowering at Claire during the dinner and undermining her for wearing Master Raymond’s protective pendant, was possibly the architect of the street attack and rape. It also leads to another moment of cross purposes where Alex Randall is accused of trying to rape Mary when in fact he’s trying to help her after she regains consciousness in Claire’s home.

When the guests, including Mary’s suitor, misinterpret Alex’s attempt to help the traumatised young woman then violence begets violence and the only male response to her being dishonoured is to have a huge punch up. Sandringham, downcast because he “was so looking forward to dessert”, and Charles Stuart make a hasty exit as Comte St. Germain summons the gendarmes. The look of outright confusion and despair on Claire’s face sums up an episode of wildly out of control sub-plots, extreme mood swings and rapid character development.