This FX television drama—based on real events, duh—is created by screenwriting duo Scott Alexander and Larry Karaszewski. They usually write films, most notably The People vs. Larry Flynt (1996)—another biographical courtroom drama focused on a celebrity—so one has to wonder if they knew, back in the mid-’90s, that the recent O.J Simpson trial would become the grist for another screenplay…

I mention Alexander and Karaszewski because they’ve been largely ignored by the press when discussing American Crime Story. The media seem more interested in the involvement of producers Ryan Murphy and Brad Falchuk—who co-created FX’s biggest success American Horror Story. The similarities in title, plus the added involvement of Murphy behind the camera (he directs three of these ten episodes), perhaps led some to make unfair assumptions about this show. It’s not that Murphy and Falchuk aren’t talented people, but American Crime Story is a world away from the style-over-substance, larger-than-life fare they’re known for.

It’s also true that the very idea of turning the O.J Simpson trial into a TV series feels low-rent. The actual event became a media circus in 1994, and it just seems like a cheap and tawdry idea to drag everything up again, by adapting Jeffrey Toobin’s best-selling book The Run of His Life: The People v. O.J. Simpson. Also, accepting that almost everyone watching knows the climactic verdict, could American Crime Story create something worth watching for its own merits? Is there something to be said about this fascinating but ugly ordeal, that hasn’t been said already? 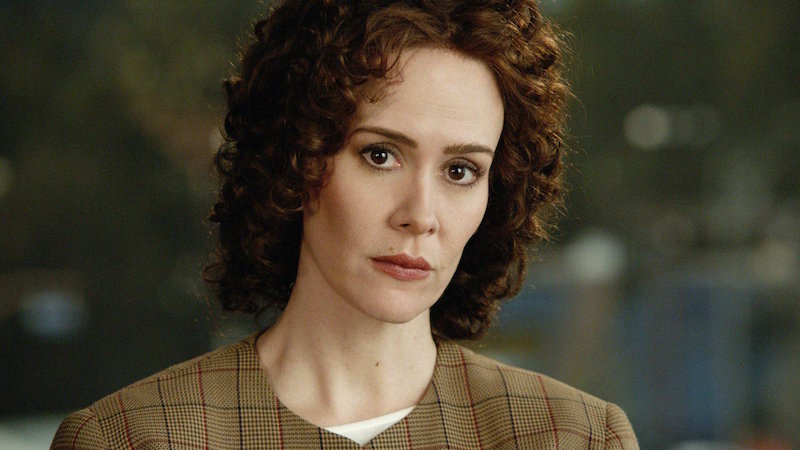 For me, it helped that my knowledge of this famous trial was average at best. I was 16 when the jury’s verdict was delivered, and the trial hadn’t caught my attention. I remember seeing highlights on the news (that white Ford Bronco travelling down the freeway, O.J trying on the murderer’s glove in court), but it hadn’t become the must-see soap opera it became for so many millions. O.J Simpson was a very American sporting hero, too, and a person I only knew as ‘Nordberg from the Naked Gun films’.

American Crime Story seized an opportunity to retell the story for both ‘a new generation’ and fellow thirty-somethings who let is pass them. Having only been peripherally aware of the O.J trial, and therefor no expert on the matter, I was entertained and satisfied by how The People v. O.J Simpson (hereafter TPvOJS) told its story. Unlike a lot of shows, it deserved its ten hours and used every instalment very efficiently—sticking to the facts of what happened in the courtroom (a matter of public record), while shedding light on some of the less-known incidents occurring beyond it.

The great thing about dramatisations is they give audiences an easy way into difficult narratives, putting us inside the minds of the key players. Simply watching live news reports can’t match the bond a good drama has on a viewer. The downside is you can’t be sure things aren’t being exaggerated or ignored for storytelling purposes, or where instances of poetic license have twisted things into inaccuracy. I have no idea if this show is a 100% truthful telling (I’d guess not), but there weren’t many moments that appeared to stretch credulity. I had no reason to doubt what was being portrayed. 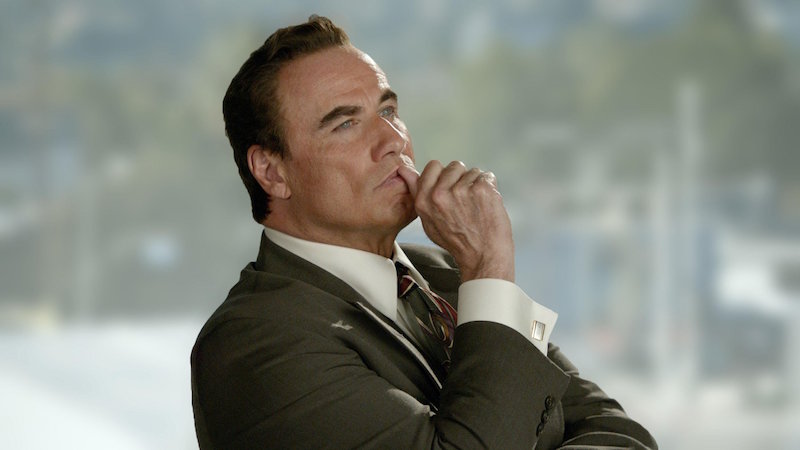 The season opens with the discovery of Nicole Brown Smith and her boyfriend Ronald Goldman’s slaughtered bodies at a Brentwood condo in L.A, the same night legendary football player O.J Simpson (Cuba Gooding Jr.) flies out to Chicago. At first, the starstruck detectives tip-toe around the most likely explanation that sports hero O.J killed his ex-wife and lover out of jealousy, not wanting to believe such such an inspiration figure is guilty of double murder.

Fortunately, District Attorney Marcia Clark (Sarah Paulson) has no such qualms because she barely knows who O.J is. Marcia accepts the case for the prosecution following O.J’s arrest—which only happens after a farcical highway chase when Simpson snuck out to avoid arrest at his home, taking a white Ford Bronco with his friend A.C (Malcolm-Jamal Warner) at the wheel. Eventually, O.J’s arrested and the case goes to trial—with slimy  ‘celebrity lawyer’ Bob Shapiro (John Travolta) and charismatic black lawyer Johnnie Cochran (Courtney B. Vance) fighting for acquittal, while Marcia enlists the help of talented black attorney Chris Darden (Sterling K. Brown) to lock this fallen idol way.

One of the thing that elevates TPvOJ above ‘tabloid trashiness’ is the exceptional casting. It didn’t have to be this high calibre, but the fact they were able to pull together an ensemble of big-name talent is a credit to the show. Cuba Gooding Jr. may lack O.J’s physical stature, but he plays him with just the right amount of likability that makes you feel sick knowing he’s likely a killer. Sarah Paulson’s been a standout on American Horror Story most years, but it’s here she stakes a claim to being one of television’s best actresses today. She’s wonderful as Marcia Clark—a gifted lawyer and single mother, handed a case it seems impossible to lose because of the evidence against O.J, who nevertheless finds herself struggling when unforeseen pressures come into play: the distracting nature of becoming famous overnight (criticised over your outdated frizzy hairstyle), and how to combat a defence who plays the ‘race card’ so effectively. 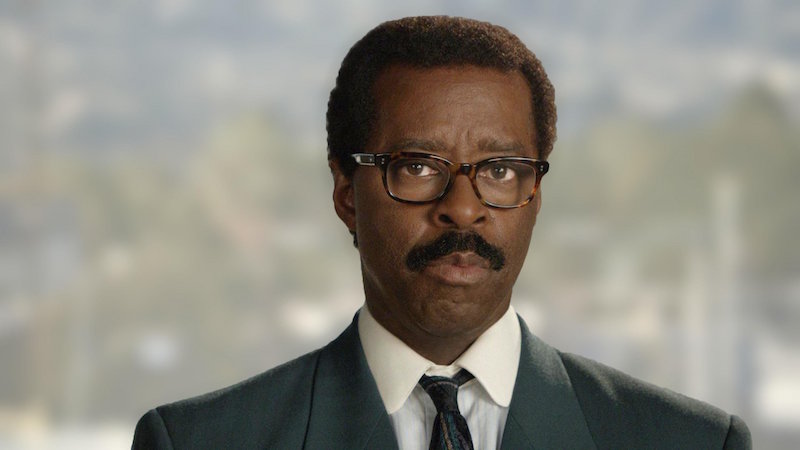 On the other side of the courtroom, Travolta gets to play the intensely dislikable Robert Shapiro — the kind of besuited snake you’d imagine would become a lawyer to ‘defend the indefensible’ for big bucks. It’s a great monster that allows Travolta to chew some scenery, although Shapiro melts into the background halfway through, as flashier lawyer Johnnie Cochran is made lead attorney. Courtney B. Vance is the equal of Paulson, but with the added benefit of playing someone considerably more extroverted and a gifted orator. It’s very easy to be drawn into Cochran’s interpretation of events, and I enjoyed the idea that he saw the O.J case more as a platform to highlight racial issues in America.

TPvOJ is also one of the few TV shows that takes place in the recent past of the 1990s, and manages to make it feel more alien and old-fashioned than you’d imagine. It’s rather bewildering to realise 21 years have passed since these events actually took place, during which time a whole generation has grown up. The fashions and cars are obvious signs of age, but more interesting were the smaller details that make you realise how far we’ve come: like Cochran being handed a very important fax, mid-trial, that slowly winged its way to his fingers (when a two-second text message would do the job today), the shocking moment when it’s mentioned that marital rape was only made illegal in 1988, of fact Marcia faces an uphill struggle getting the jury to accept DNA blood evidence as unequivocal proof of anything. This was a long time before the general public really understood how compelling the science is.

Sometimes a TV show comes along that manage to surprise you and subvert preconceptions, thanks to great casting and well-written scripts, and The People v. O.J Simpson is one of them. It must have been a tough show to develop and judge the precise tone of, but it succeeds on most counts and even compelled me to do light research into the event myself. Perhaps the best compliments is that I felt genuinely sad when the finale was over, and hoped against hope that we’d see Paulson and Vance go at it again on another case. That’s impossible, of course. And, worryingly, it’s been announced that season 2 of American Crime Story will tackle the aftermath of Hurricane Katrina—which holds much less interest for me. But I’m willing to give it a try based on the quality here.

THE LEFTOVERS, 3.7 — ‘The Most Powerful Man in the World (and His Identical Twin Brother)’