This week on Game of Thrones, the older generation came under threat from the younger generation, various people made plans to return home, there were no less than four murders (not including bystanders), the dragons were released, and you-know-who’s fate was finally resolved… 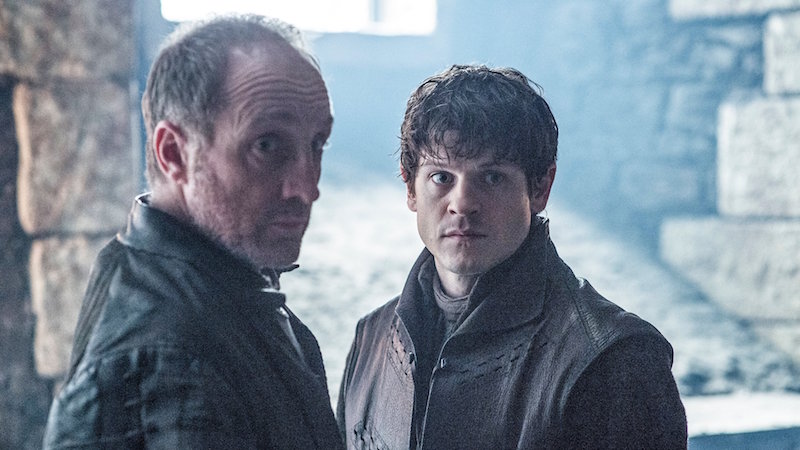 I didn’t expect another shocking death so early in the season, but the first of two came during a scene at Winterfell, after Roose Bolton (Michael McElhatton) was told of Sansa Stark’s (Sophie Turner) escape from his men, in the presence of Ramsay Snow (Iwan Rheon). The bad news was ameliorated by word from Maester Wolan (Richard Rycroft) that Roose’s wife, Walda (Elizabeth Webster), has given birth to his son—House Bolton’s true heir, given that Ramsay’s a bastard—and this led to the genuine surprise of Ramsay stabbing his adopted father to death, while Lord Karstark (Paul Rattray) and Maester Wolan watched on. It’s always been on the cards that Ramsay would do something dastardly to protect his inheritance, but I always thought Roose was one of the few people Ramsay cared about. How foolish! Ramsay’s selfish and power-hungry, so nothing is beyond him—even killing the only person who’s ever shown him kindness and respect. And just to ensure he’ll take over House Bolton and Winterfell, there was that ghastly scene where Ramsay led his adopted mother and newborn brother to the kennels and fed them to the hungry dogs. “I prefer being an only child”.

She wasn’t exactly dressed like a lady.—Brienne, to Sansa about Arya

Elsewhere, Brienne (Gwendoline Christie) revealed to Sansa that her sister Arya (Maisie Williams) is still alive, but hasn’t been seen in a long time. It’s astonishing to think the Stark siblings haven’t shared the screen since the first season, five years ago. More importantly, this appears to be the end of the line for Sansa and Theon (Alfie Allen), as the latter’s decided she’s safer with Brienne and he’ll return to the Iron Islands. One would hope Theon’s plotting vengeance against Ramsay, but needs to reassert his power first. 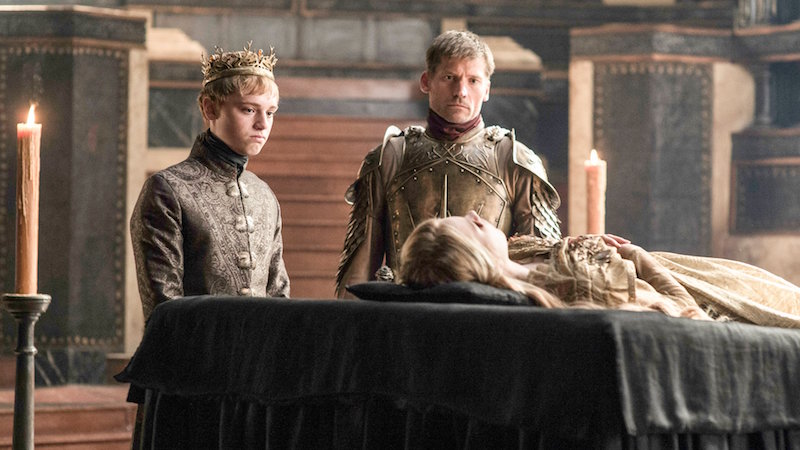 There’s another funeral to attend, but Queen Cersei (Lena Headey) has been forbidden to go by her own son, King Tommen (Dean-Charles Chapman), largely because he’s embarrassed by his inability to spare his mother the pain and humiliation she went through with the Faith Militant. That’s all very well, but denying your mother the chance to say goodbye to her own daughter? I’m not sure I really bought into Tommen’s thinking. She’s safer in the Red Keep, sure, but with The Mountain as her personal bodyguard Cersei’s probably the safest person in Westeros right now. Incidentally, loved the comic scene where a lowly peasant bragged about exposing himself to Queen Cersei during her ‘walk of shame’, only to later have his head exploded against a stone wall by The Mountain.

They spill more blood than the rest of us combined.—Jaime

Also nice was the scene between Jaime (Nikolak Coster-Waldau) and the High Sparrow (Jonathan Pryce) in the Great Sept of Baelor, with Jaime understandably looking to avenge the treatment of his sister, but realising that the insidious power of the Faith Militant isn’t to be underestimated. As the High Sparrow says, an army of soldiers with no family and nothing to lose can “topple empires”. Removing them from the social fabric of the city isn’t going to be easy, and running the High Sparrow through with a sword won’t help matters. It will probably make things worse. 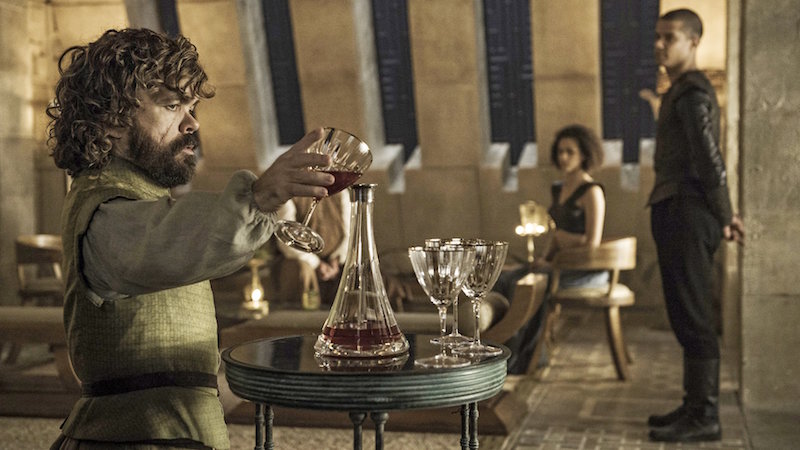 The absence of Daenerys continues to cause problems for her trusted inner circle, who’ve been left to try and keep order in the city. Following the destruction of all the ships in the harbour by the Sons of the Harpy, and news that Meereen’s the only free city in Slaver’s Bay, Tyrion (Peter Dinklage) decides their only way to keep power is to release the dragons under the Temple.

That’s what I do. I drink and I know things.—Tyrion

It was an enjoyable moment seeing small Tyrion creeping into Rhaegal and Viserion’s lair with his flaming torch, to essentially make friends with the beasts by releasing them. Considering the reasons they were imprisoned to begin with (burning cattle, incinerating children), is this really the best plan? It perhaps would have been nice for someone to raise this matter, but I assume Tyrion thinks there’s no other option. Having two large dragons circling Meereen will certainly ward off enemies, if they can be controlled to some degree. Loved Tyrion’s quiet pleading to the dragons, too. “I’m here to help… don’t eat the help.”

A rather predictable scene for Arya this week, who was again visited on the street by the Waif (Faye Marsay) and beaten with a stick. Jaqen (Tom Wlaschiha) then arrived, making it clear this is essentially another test of her commitment to the cause, before leading her away from her life as a beggar. It wasn’t entirely clear, but I assumed the Waif was actually Jaqen in disguise. I just really hope this entire storyline gains momentum and direction soon, because my interest in Arya dropped considerably in season 5 by putting her in Braavos. She needs to get back to Westeros with some new skills and a quest. 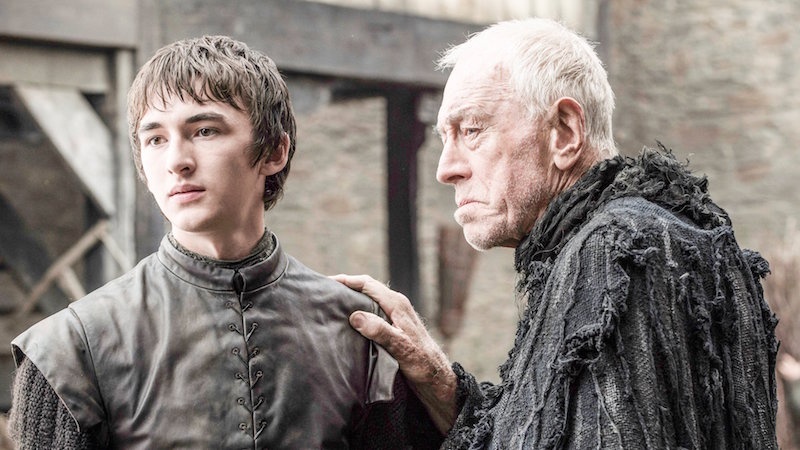 “Home” opened with the first appearance of Bran Stark (Isaac Hempstead Wright) since season 4’s finale, as the television narrative caught up with George R.R Martin’s books. Unable to keep delaying matters, I’m glad we’re now continuing Bran’s storyline after a break—which has actually done us some good. It seems Bran is taking lessons from the Three-Eyed Raven (Max von Sydow, taking over the role), and being transported through Time & Space as part of his training.

It is beautiful beneath the sea, but if you stay too long, you’ll drown.—Three-Eyed Raven

In a very entertaining scene, Bran—able to walk in these ‘projections’—was present at an earlier time in Winterfell’s history, when his father Ned was a boy training with his siblings. We even saw a young Hodor, whose real name is Wyllis and could speak full sentences. I’d love to know why ‘Hodor’ became the only word he can say, what it means or refers to. I presume he now suffers from some form of brain damage as a result of a battle, given how his younger self was being steered away from swordplay.

Outside, Meera Reed (Ellie Kendrick) is growing restless waiting for Bran to take more affirmative action than lying around in tree roots having visions with an old geezer, although ‘Leaf’ (one of the Children of the Forest) asks for patience. 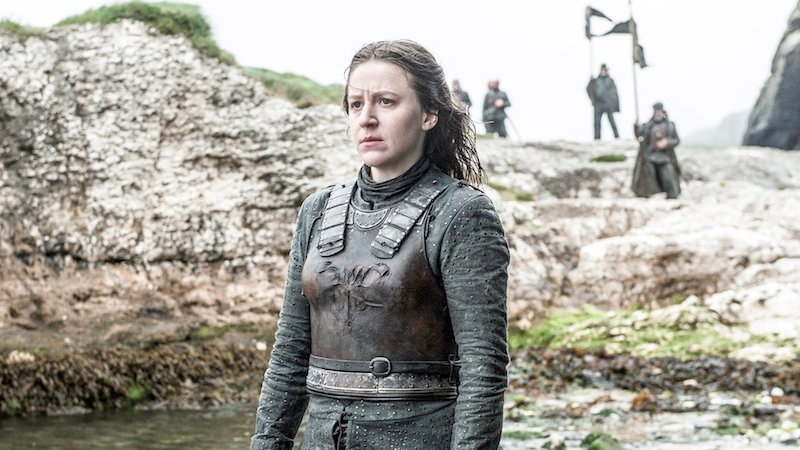 Now that Theon’s decided to return home, it seems the Iron Islands are going to take greater prominence in Game of Thrones’ narrative. Balon Greyjoy (Patrick Malahide) is bemoaning the loss of Ironborn strongholds on the mainland, but refuses take his daughter Yara’s (Gemma Whelan) advice to end the war with the North. It seems the younger generation are getting tetchy with the older generation (see what also happened between Roose and Ramsay at Winterfell), and a similar fate befell Balon here. As he tried to cross a dangerous-looking rope bridge during a storm, Balon’s crazy younger brother Euron (Pilou Asbæk) appeared and threw him over the side to his death. After the funeral, Yara is reminded that she can’t legally succeed her father unless she passes the ‘Kingsmoot’—a democratic vote amongst longship captains. One would assume Euron’s going to be pulling strings to ensure he takes over, and not his niece.

I am the storm, brother. The first storm and the last. And you’re in my way.—Euron

And finally, Davos (Liam Cunningham) and his fellow loyalists to Jon Snow (Kit Harrington) are still locked in the store room from Ser Alliser’s (Owen Teale) mutinous Night’s Watch. Luckily for them, Castle Black was later breached by the Wildings, led by Tormund (Kristofer Hibju), and the Night’s Watch rather uncharacteristically surrendered when faced with the giant Wun Wun inside their courtyard. It was perhaps understandable given how he can swat a man’s body against a wall like it’s a twig, but still. Maybe it was supposed to show how poor morale and the leadership is under Ser Alliser?

I’m not a devout man, obviously. Seven Gods, Drowned Gods, Tree Gods, it’s all the same. I’m not asking the Lord of Light for help, I’m asking the woman who showed me that miracles exist.—Davos

As expected, Davos then pleaded for Melisandre (Carice van Houten) to user her magic to resurrect Jon, despite the fact she’s lost faith in her religion and doubts her own abilities. A ceremony nevertheless takes place, all eyes watching, as Melisandre cleanses Jon’s body, burns snippets of his hair, and chants strange words over this ashen corpse. It doesn’t seem to work, so they all sheepishly leave the room, only for Jon’s eyes to snap open a few moments later.

Considering everyone involved with the show kept insisting Jon Snow really is dead, I can’t help feeling disappointed he’s back from the dead this early. It’s not his return that’s the issue, but how predictable it was—as everyone’s first theory was Melisandre bringing him back to life with magic. It’s another case of fans coming up with more imaginative scenarios than what was delivered, but I guess sometimes the simplest idea is the best. It remains to be seen if Jon Snow’s the same person in spirit, or has been changed in some way because of this experience, but I predict he’ll be back and ready to protect Castle Black from Ramsay’s army after Sansa arrives safely with Brienne. But now, surely Melisandre has to die? You can’t have a character around who can bring dead people back to life so easily. Does anyone know where they put Rob and Lady Stark’s bodies?

While not quite as involving as the premiere, “Home” was another great instalment of Game of Thrones. I especially liked the shocking murders of Roose and his family, which gives Ramsay the power he’s always craved. He’s been a dangerous bastard from the start, but how will he fare as the head of House Bolton? It’s been shown he has tactical skills on the battlefield, but leadership is about so much more. All Ramsay knows how to do is scare people into doing his bidding; he doesn’t command well-earned respect from anyone. I predict a terrible bloodbath he’ll ultimately lose because his own men don’t actually want him to triumph. It helps that he has the support of the Karstarks, true, but will that be enough? As Roose warned Ramsay, “if you acquire a reputation as a mad dog, you’ll be treated as a mad dog; taken out back and slaughtered for pig feed.” I doubt Ramsay listened.

I also enjoyed seeing more of the Iron Islands, as we haven’t seen much about their way of life and culture. Now that Balon’s out of the picture, there’s a chance for younger blood to inject some passion and spirit into the Greyjoy side of things — especially if Theon arrives home and takes charge.

The situation with Bran also has a lot of potential—if only because his ability to jump around through time opens up the possibility that old characters will make return appearances. It would be fantastic to see Sean Bean as Nedd Stark once again, with Michelle Fairley as his wife Catelyn. Classic Thrones.

YOU, ME & THE APOCALYPSE – ‘Episode One’