Alien brain parasites, entering humans through the mouth, turn their host into a killing zombie. Some teenagers start to fight against them.

Fred Dekker’s a writer-director who sank into obscurity after the atrocious RoboCop 3 (1992), but got two cult 1980s favourites under his belt: Monster Squad (1987) and the previous year’s Night of the Creeps. A decade of uncredited scripting followed in the 1990s before Star Trek: Enterprise’s writing staff threw him a lifeline in the early-2000s, but he’s been staging a comeback thanks to his friendship with Shane Black, whom he co-wrote Monster Squad and The Predator (2018) with recently. That didn’t turn out so well, so maybe it’s back to obscurity for this filmmaker.

Dekker’s debut should have been the horror-comedy House (1986), but Ethan Wiley wrote the script based on his idea, so Night of the Creeps instead became his launchpad as a filmmaker. (Coincidentally, one of the posters for this movie shares House’s idea of a corpse’s hand turning a doorknob.) Night of the Creeps was a box office flop, only grossing $591,366 domestic, but has since become a deep cut reference for discerning horror fans. One could even argue James Gunn’s Slither (2006) is a loose remake. 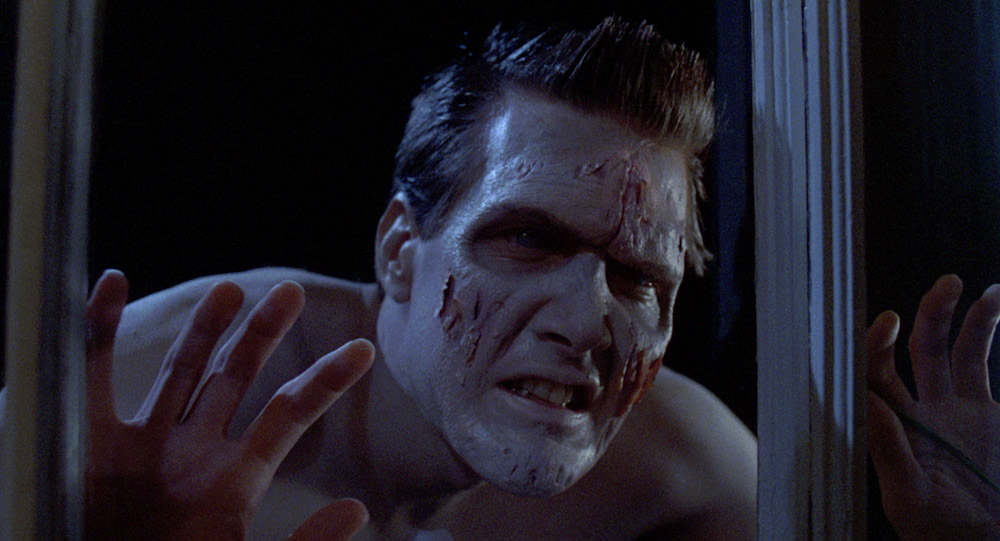 Intending to make a lighthearted mixture of B Movie tropes, Night of the Creeps is memorable for its bizarre collision of horror and sci-fi ideas. It begins in outer space with baby-faced aliens fighting over the release of dangerous cargo, which is jettisoned and lands somewhere in the Californian countryside of 1959, where young lovers smooching in a convertible mistake the capsule for a meteor and head off to investigate.

The story then takes an odder turn when the boyfriend, upon locating the capsule in a nearby crater, gets impregnated Alien-style by its writhing contents and his girlfriend finds she’s in the middle of a slasher movie after a report about an axe-wielding maniac comes on the car’s radio. 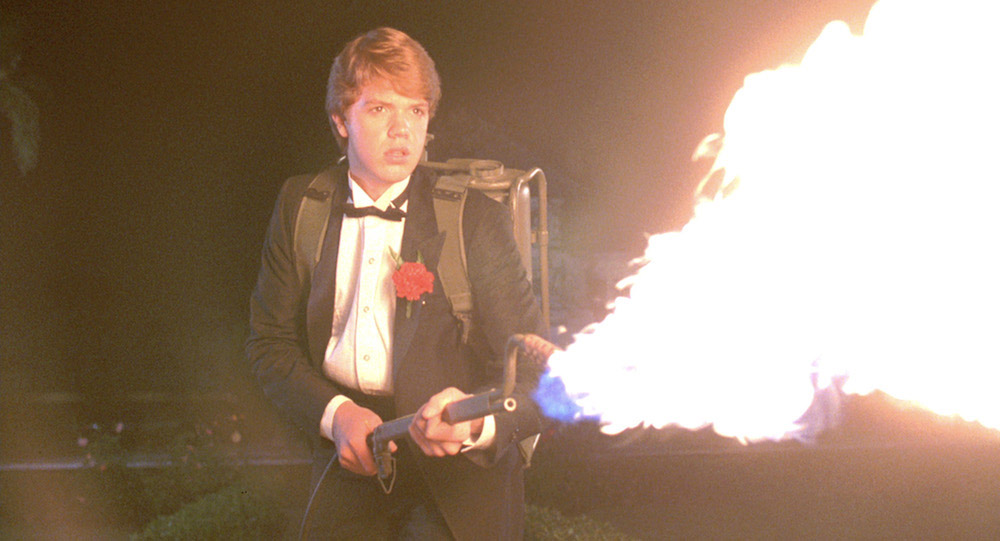 Weirdly, this retro mix of sci-fi and slasher is just an extended preamble, as the Night of the Creeps properly begins in 1986 with two college geeks, Chris Romero (Jason Lively) and “J.C” Hooper (Steve Marshall), trying to get laud and inducted into a fraternity as pledges. Did I mention there’s a Raymond Chandler-esque gumshoe called Ray Cameron (Tom Atkins), drawn to the campus after the nerds discover a frozen cadaver that awakens and kills someone? Cameron’s also the cop who dealt with the aforementioned axe murderer decades before, in the prologue, who’d been turned into a zombie by the extra-terrestrial canister of brain-controlling slugs.

Considering the majority of Night of the Creeps is a straightforward “zombies on campus” lark, with two zeroes becoming heroes, the setup is needlessly convoluted and misleading. Why not just have the canister land in ’86 and take it from there? I can only assume Dekker wanted to disguise the simplicity of his plot or extend its runtime by throwing in a lot of backstory, which certainly works for a while. I was certainly very intrigued by the 27-year time-jump and wondering why Corman University has kept an alien-infected former student on ice for so long! Answers aren’t forthcoming, sadly, so you’re led to believe the movie’s going to be a little deeper and weirder than it ends up being. 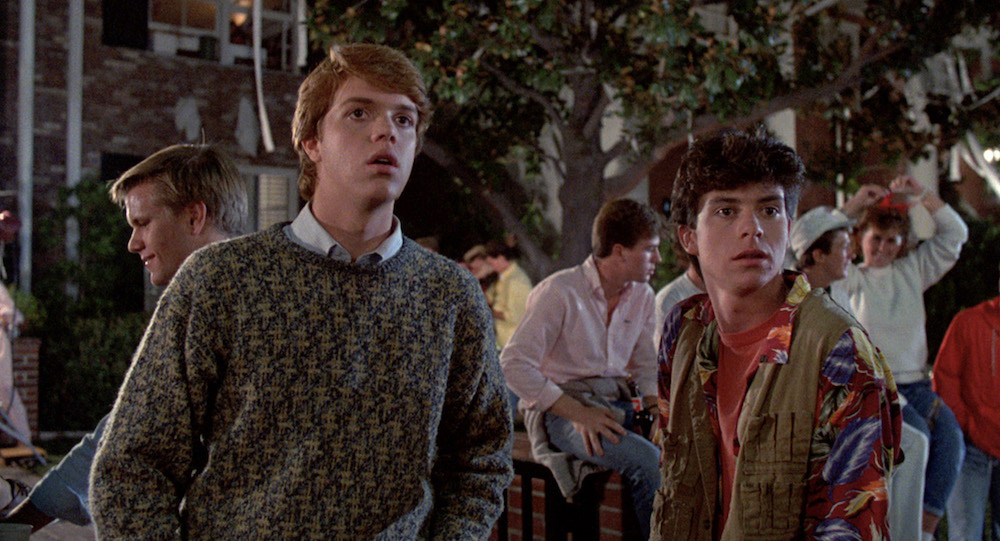 Night of the Creeps is a fun experience all these years later, now the “present day” events are themselves as retro as the scenes set in the late-’50s. I can see why it caught on as a cult curio after release on video. Jason Lively (then known as Rusty from National Lampoon’s European Vacation, and also Blake Lively’s half-brother) has good chemistry with co-star Steve Marshall, mainly because both actors feel plausible as horny teens hoping to score with hot chicks. It’s all very retrograde in terms of the young male attitudes, but harmless enough in context, and at least love interest Cynthia Cronenberg (Jill Whitlow) gets to wield a flamethrower by the end. The shot of her and Chris in smart attire (ice white dress and a classic tuxedo, respectively), standing on a sorority building’s porch and staring down a lawn full of their undead classmates, is a memorable one that deservedly became the poster.

Also memorable are many of the lines spoken by horror stalwart Tom Atkins (The Howling, The Fog, Halloween III: Season of the Witch), who clearly enjoyed chewing the scenery with such a manly character, and quickly becomes the best part of the movie. 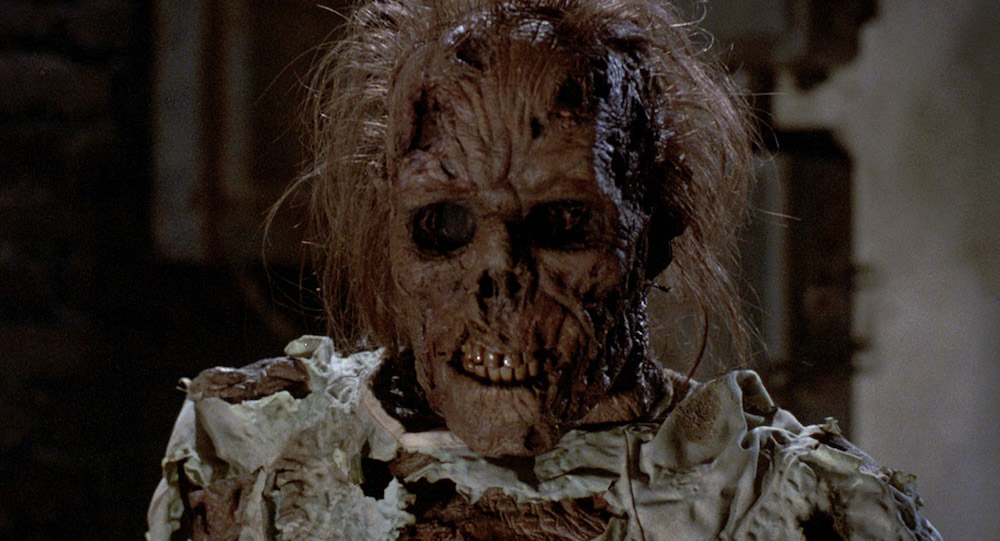 At a brisk-sounding 88-minutes, Night of the Creeps actually gets a little stuck in the middle. Once it becomes clear the zany setup with chubby aliens and an axe murderer is trivial backstory, the script sometimes struggles to make the buildup to the zombie outbreak all that involving. There are bright moments here and there, but there’s definitely a long lull when your attention starts to wander.

Thankfully, the story marches more determinedly towards its climax once the otherworldly slugs start sliding across neatly-trimmed lawns, a cat’s found with its face rotting away, and there’s a rare Dick Miller cameo in a non-Joe Dante movie. I didn’t see this early enough for it to have become a cult favourite of my own, but it’s a fun movie I now understand the lasting affection for. 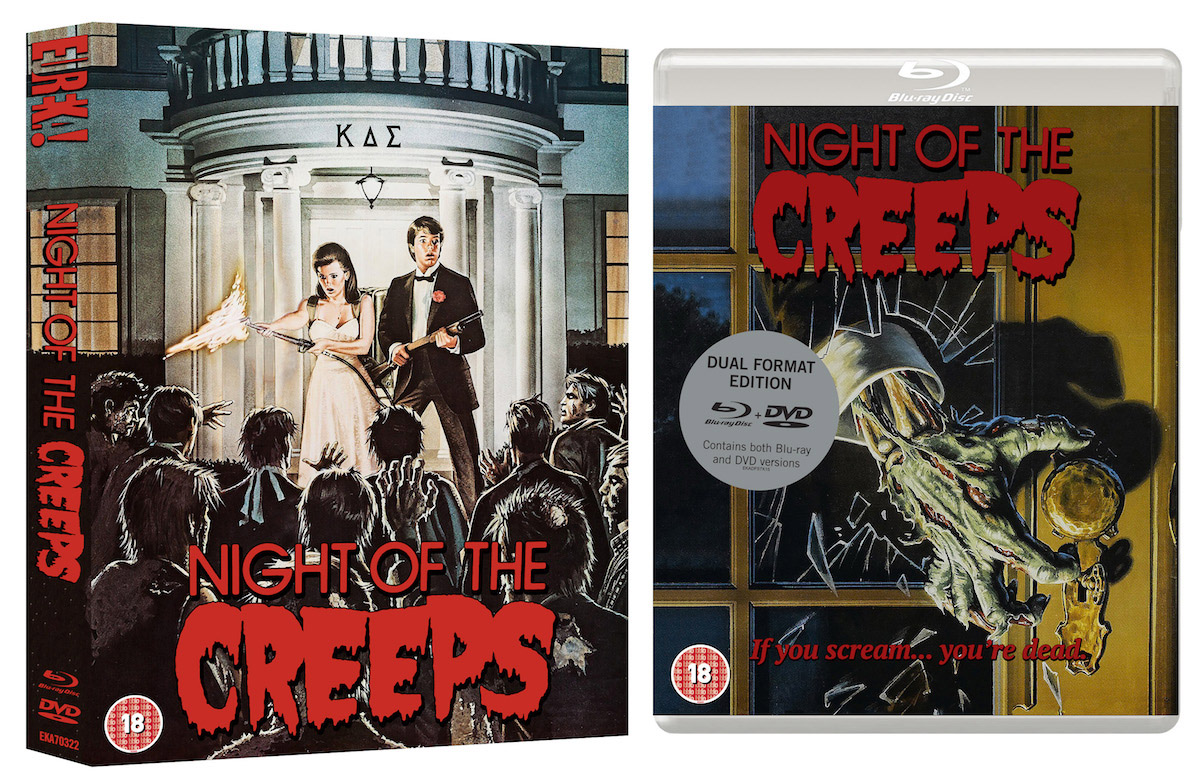 Eureka Entertainment brings Night of the Creeps to Blu-ray for the first time in the UK, with a very good 1080p 1.85:1 transfer. Details in the image are sharp, the colours nicely represented, with lifelike flesh tones and decent black levels. There’s a lot of film grain in the black-and-white prologue and some of the darker scenes towards the end, but nothing too distracting and it all helps anchor the movie in the decade it was made.

The DTS-HD Master Audio soundtrack is very good, with an immersive use of rear channels and good clarity and bass levels. The ’80s party sequences are particularly fun, and it’s certainly a sound mix that provides a lot of ambience and atmospheric sound effects to place you in the world of the movie. Considering the film’s low budget, the sound is a welcome surprise. 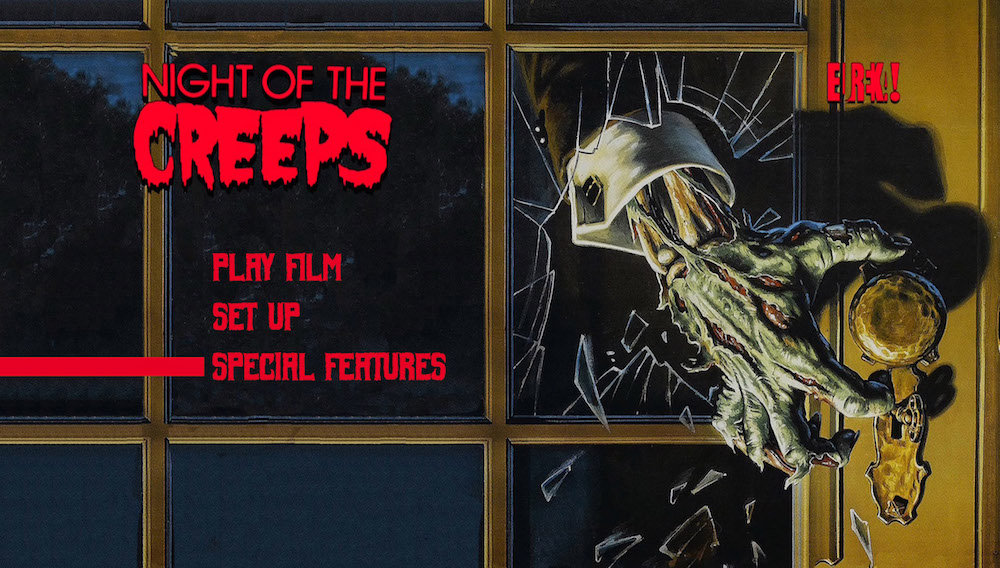 Written By
Dan Owen
More from Dan Owen
A cat and mouse develop a rivalry in New York City while...
Read More