We opened on a touching flashback that gave us another welcome chance to see Chuck (Michael McKean), during the time when Jimmy (Bob Odenkirk) was inducted into the New Mexico bar. The scenes cleverly swerved expectations on several occasions, as we’re conditioned to see Chuck and Jimmy in a certain light, certainly as brothers. But here, things felt different and a lot healthier, especially when Jimmy persuaded Chuck to join him a karaoke duet of ABBA’s “The Winner Takes it All” during the celebrations afterwards. 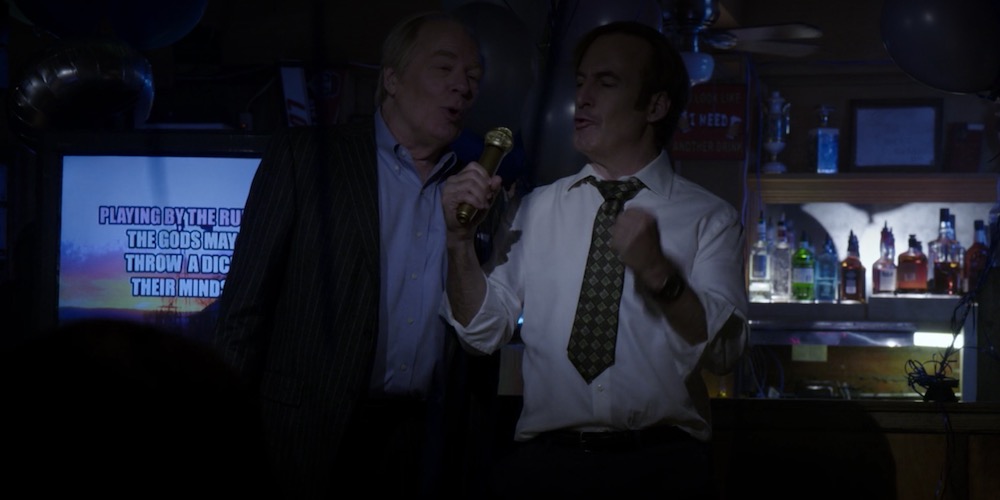 I was poised for the obvious twist that Jimmy was trying to embarrass the curmudgeonly Chuck, as being the life and soul of the party is something he’s not exactly known for, but Jimmy was actually being genuine in just trying to enjoy his big brother’s company and helping him cut loose. Even Chuck surprised me, as he wasn’t as shy and retiring as expected; soon grabbing the mic and performing much of the song with enthusiasm as Jimmy watched on smiling.

And later, with both McGill’s retiring to the same double bed, Chuck sweetly prepared the room for his more inebriated brother and didn’t quietly seeth when Jimmy started a reprise of ABBA as they laid together. He joined in, as they both drifted off to sleep. It was a rare glimpse of the McGill boys being functional and normal, even supportive, even if we know Chuck was harbouring some resentment for Jimmy tarnishing the legal profession. 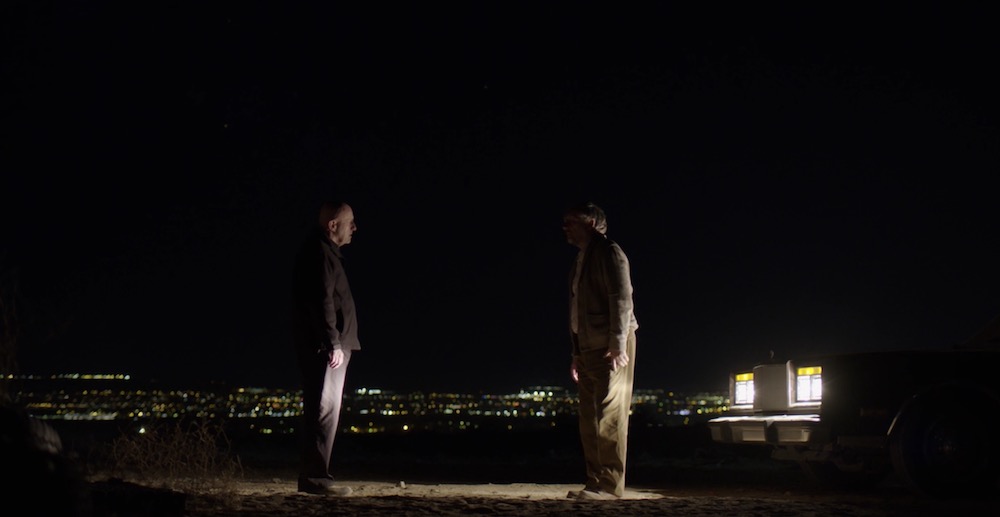 A large portion of “The Winner Takes it All” focused on Mike (Jonathan Banks) trying to find Werner Ziegler (Rainer Bock), who’s gone AWOL and is thus risking serious repercussions from Gus Fring (Giancarlo Esposito). Mike still considers himself a friend of lovesick Werner, so was keen to tidy up this mess quickly and protect him from Gus’s wrath, and it was incredibly entertaining seeing him go about his mission. If you need something doing right, Mike’s the man to call! He posed as Werner’s concerned brother-in-law, claiming Werner has dementia, in order to gain access to a money transfer agency’s CCTV footage of him getting a cab somewhere after moving funds, then managed to predict where Werner would take his wife when it became clear she’s flying into Denver from Germany to be with him.

However, adding to the difficulty of Mike’s situation was Lalo Salamanca (Tony Dalton), who has been staking out Gus’s chicken farm and eventually starts tailing Mike around. I wasn’t entirely sure what Lalo was hoping to achieve with any of this, but presume he has a gut feeling Gus’s operation is growing in size and wants to be sure his family aren’t going to be wiped out in the expansion. A Superlab on the US side of the border that can produce huge quantities of its own product to sell, without any of the crossings back and forth into Mexico, would definitely put the Salamanca’s on the back foot.

So it was fun seeing Lalo get embroiled in Mike’s current dilemma, essentially having to use his own blunter investigative skills to figure out what Mike’s up to. (I loved the moment when Lalo just climbed into the ceiling of the money transfer agency, then crawled across in the roof space, before dropping down into the backroom and knocking a likeable employee unconscious to access the CCTV.) It was a funny way to show the stark difference between how the Salamanca’s go about their business, and the cannier men Fring employs. The scene where Mike outsmarted Lalo by leading him into a car park with an automated barrier, only to leave after breaking the ticket machine by inserting a sandwich of foil and bubblegum into its feed, was a masterstroke. 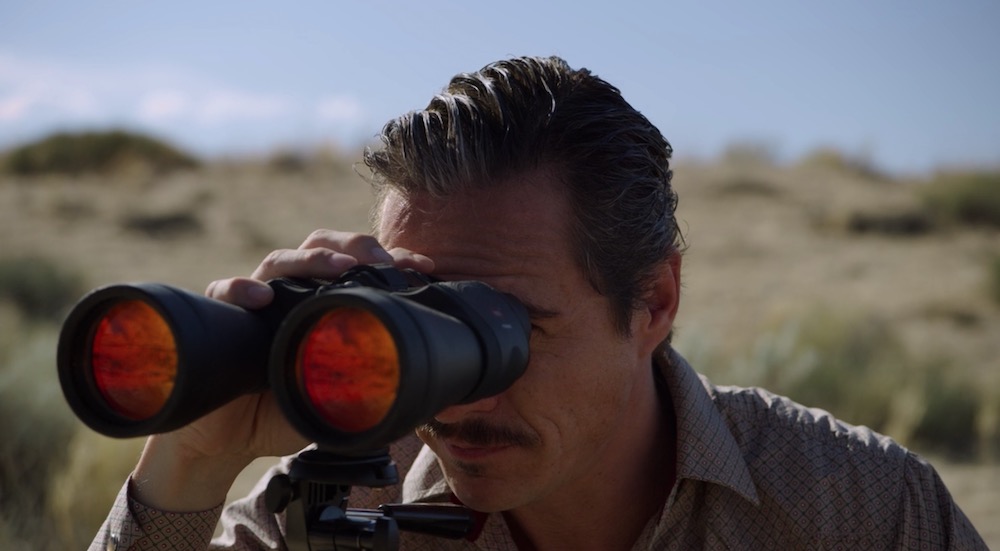 Ultimately, this subplot didn’t end well for Werner. Mike found the German engineer sunning himself beside a pool, waiting for his wife to arrive to begin their four-day break together, moments away from revealing too many details about the Superlab to Lalo (who was clever enough to have located Werner himself, then called him pretending to be one of Gus’s henchmen). Mike angrily drove Werner into the desert to await instructions from Gus, and the decision was to eliminate Werner because he’s lost everyone’s trust. As expected, Mike volunteered to do the deed himself as a courtesy, allowing his friend to make a call so his wife would get the next flight home immediately (rather than be followed and potentially killed by Gus’s men). And he promised Werner that his death will be made to look an accident she’ll never think to question.

It was a tragic moment, seeing sweet Werner walking into the desert to look at the stars, with Mike following close behind and eventually raising his revolver and firing. There was a lovely silhouetted shot of this moment, too. Werner’s story was clearly echoing a similar situation that arises between Gale Boetticher (David Costabile) and Jesse Pinkman in season 3 of Breaking Bad, too. Gale being a similarly likeable geek (also with German heritage) drawn into Gus’s criminal enterprise, but being too naive to fully understand the danger he’s in and the company he’s keeping. It was no coincidence that Werner, like Gale, favours the hideous ‘socks with crocks’ look, too.

But if you didn’t quite catch the foreshadowing, Gale himself reappeared inside the hollowed out Superlab “hole” that’s now unfinished and without its mastermind to finish the job. Ironically—spoilers!—Mike will one day be trying to urgently warn Gale that Jesse’s trying to eliminate him, as he did Werner, in order to make Walter White an indispensable part of the Superlab he designed. 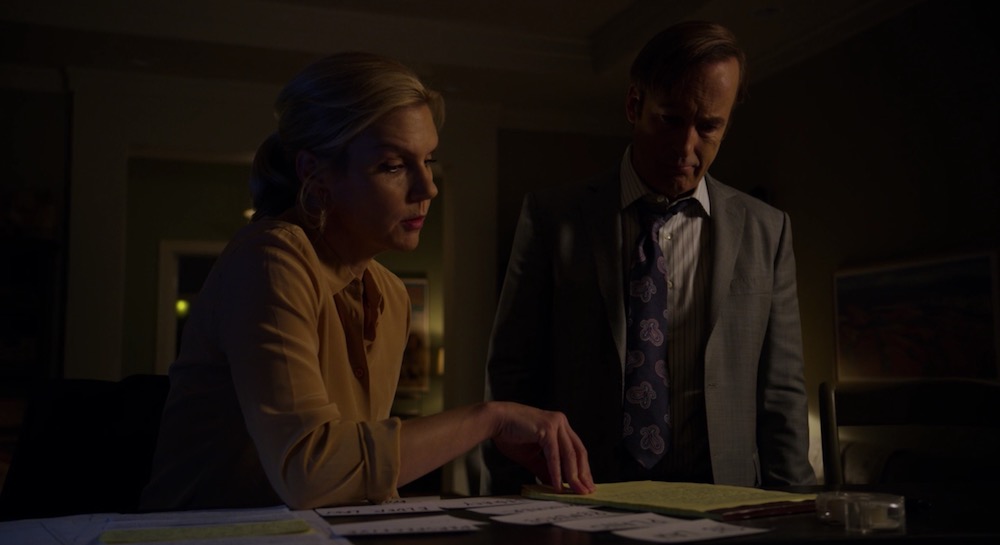 Finally, it was Jimmy’s second chance to get his license to practice law back. Kim (Rhea Seehorn) devised a clever but expensive plan to convince people he’s sincerely turned over a new leaf after a year to reconsider his life after losing his brother. So, he spends $23,000 on a reading room dedicated to Chuck at HHM’s recovery celebration (as the “anonymous donor” Kim “accidentally” lets slip to guests), and feigns mourning at Chuck’s grave when several of Chuck’s lawyer stop by to pay their respects. All in an effort to get the word around that Jimmy’s devastated by Chuck’s passing and deserves another chance.

There was also a nice moment when Jimmy, now on the board of HHM, fought for one-time shoplifter Christy Esposito (Abby Quinn) to be given a scholarship at the firm. He was championing someone whose past mistake could actually be an asset for a lawyer, and that everyone deserves a second chance, but his attempts to persuade the other board member didn’t succeed. He later told Christy she’s been unsuccessful in person, giving her inspiring words about becoming a success just to spite them (“the winner takes it all”), but Christy doesn’t even seem that upset by the news. Unlike Jimmy, she doesn’t seem to take rejection that personally, whereas he collapses into tears moments later when his car won’t start, realising Christy’s situation isn’t much different to his own right now. He can’t escape his past and what snobbier people think about it. 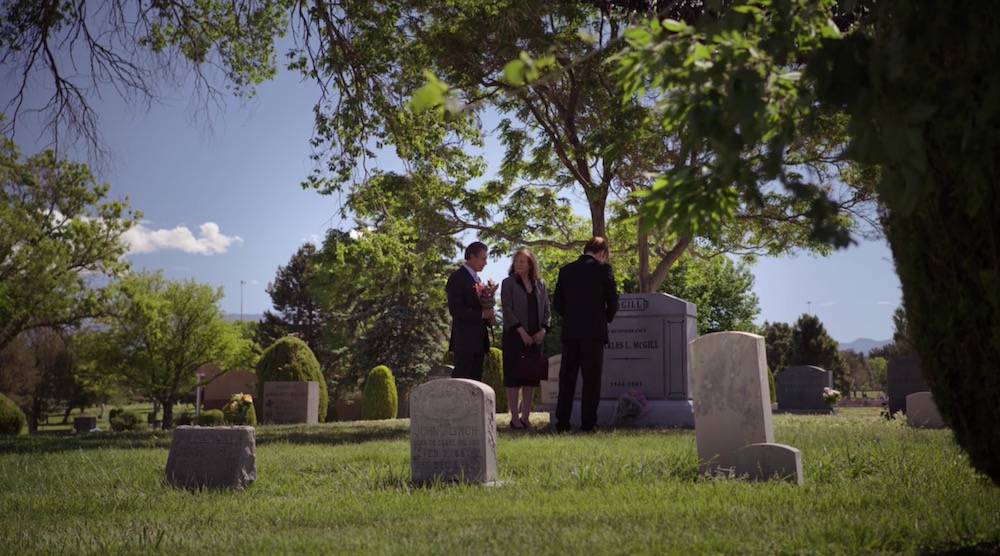 The big emotional climax of the season, for Jimmy, was seeing him achieve his goal of being reinstated as a lawyer. After last week’s unexpected setback, Kim’s assistance helped him claw back trust with the appeal board, even if it was all phoney. The icing on the cake was a decision to read aloud the letter Chuck wrote to him, as his closing argument that he deserves another shot in this profession. Kim knew he was going to do this, but when Jimmy broke off halfway through and instead started speaking from the heart, his impromptu moment elicited genuine tears from her and the others gathered there.

The cruel wakeup call for Kim came soon after, as she met with Jimmy and saw he was elated that the appeal went so well. She was overjoyed their decision to read Chuck’s speech had the desired effect, but even more elated that he went off-script and sealed their decision to reinstate him by speaking so honestly about Chuck and what his brother’s words mean to him… until, in a fantastic moment, Jimmy gave away that his heartfelt moment was still part of his con trick. He didn’t mean any of it, he just sensed that it would play better as part of his performance, and Kim looked genuinely shaken that he could be so damned convincing at faking emotion. Or that he wasn’t the person she thinks he is. He’s a con man, pure and simple. Can she be with someone like him, who has this depth of unscrupulousness woven into his soul?

In the final shot, Jimmy’s being led away by a clerk to complete the paperwork to regain his law license, and drops the news he’s not going to be using the name “McGill” any longer. (A name he was once cherishing in the flashback with Chuck, daydreaming that HHM could become HHMM.) Now, according to Jimmy, it’s “s’all good, man!”—nodding to his pseudonym Saul Goodman, which one presumes he’ll be using next season. The last vestige of Chuck McGill’s influence is about to be confirmed to history, and Kim’s going to have to make some big decisions about whether or not “Saul Goodman” is the kind of boyfriend she wants in her life. 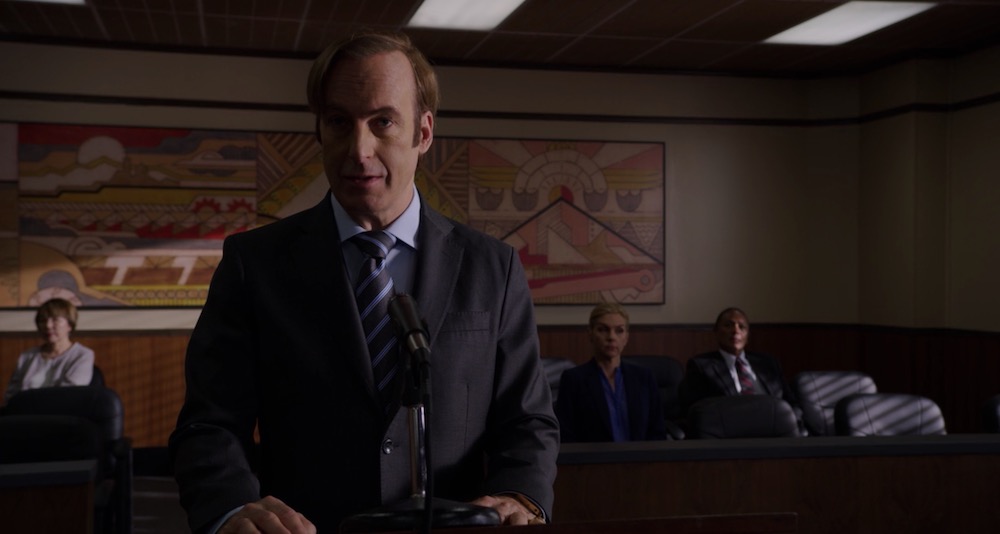 The fourth season of Better Call Saul took some big steps towards Jimmy McGill becoming Saul Goodman, although it’s still yet to happen. One feels that the writers are in a dilemma because the closer the show edges towards the era of Breaking Bad the more limited their storytelling options become. Season 5 will presumably involve “Saul Goodman” setting himself up as a criminal lawyer, renting his iconically bad taste office, and getting into more seriously underhanded activities—perhaps with Mike and Gus, who are now big players in the city’s underworld.

We’re still left to ponder how Kim will leave the series (or at least how her absence in Breaking Bad will be explained), but there’s less and less for Better Call Saul to really do. We know Gus’s expensive Superlab will be finished (despite the setback with Werner), Lalo’s meddling will be handled with Gus’s customary efficiency, Hector won’t recover from his stroke, and Gale will become the best meth cook in the land until a certain Mr White gets cancer… so it’ll be interesting to see how the writers keep things unpredictable on some level. The threat of a rather tedious final season, dovetailing into season 2 of Breaking Bad (when both Saul and Mike first appeared), must be avoided at all cost.

Season 4 had its strengths and weaknesses. Once again, the stuff with Mike was more exciting and tense than anything happening with Jimmy, which can be a problem at times. The loss of Chuck was absolutely necessary, but he was such a foundational character that his absence did seem to impact Jimmy more than expected. There just seemed to be less for Jimmy to do, or fight against, until towards the end when his reinstatement became a more pressing concern. Kim had some good moments here and there, but I wasn’t especially drawn into anything she was doing this season, although her growing realisation Jimmy’s a scumbag provided some excellent reaction shots. I have a feeling she’ll have bigger opportunities next year when Jimmy becomes a more overt disgrace to the legal profession and her support and love for him diminishes.