A follow-up to season 2’s “International Assassin”, The Leftovers’ penultimate hour was another imaginative and engrossing piece of television drama, albeit but one that naturally lacked the original’s wow-factor, since we’re now accustomed to the slippery rules of the “astral plane” Kevin Garvey (Justin Theroux) can access when he dies. For that reason, “The Most Powerful Man in the World (and His Identical Twin Brothers”) was very much like a movie sequel: much bigger, more ambitious, but lacking freshness.

The crazy world-saving scheme hatched by Kevin Snr. (Scott Glenn) was put into action this week, after he and the others awoke from their drugged meal, to find Kevin Jnr. had already dunked himself underwater in Grace Playford’s (Lindsay Duncan) dirty pond. After hauling him out from his watery grave, fearing the worst, a spluttering Kevin was soon asked to be put back underwater, to undertake the various missions he’s been tasked with: ask Grace’s dead children where their missing shoes went; tell John’s (Kevin Carroll) daughter Evie (Jasmin Savoy Brown) that her parents love her; and, most vitally, get the final chant from Christopher Sunday (David Gulpili) that’ll enable his father to stop an apocalyptic flood. 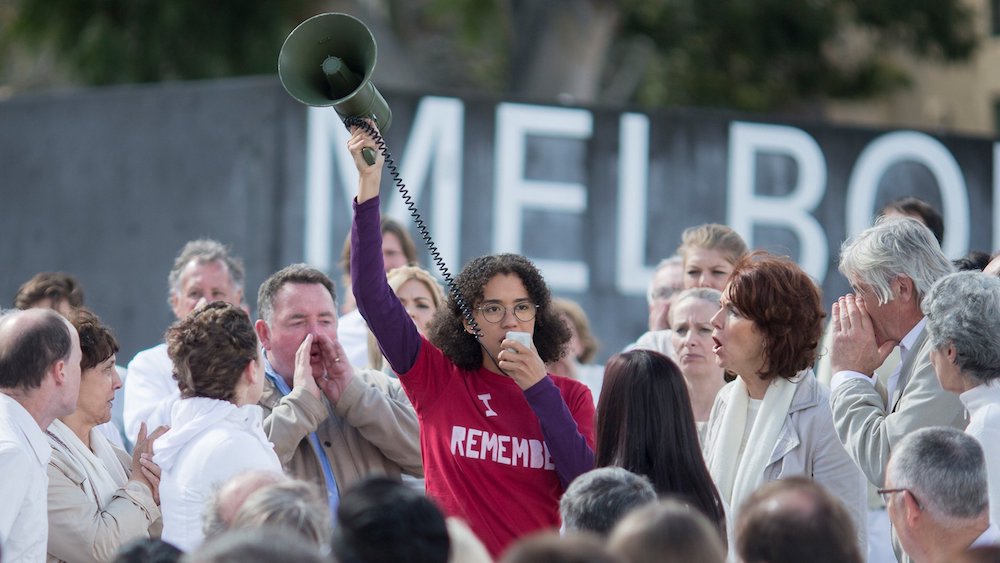 What followed was another very imaginative mix of scenarios, again echoing the ‘flash-sideways’ conceit of Lost’s sixth season, with Kevin finding himself in a bizarro version of reality. A world populated with familiar deceased people, now in new roles designed to oppose or challenge Kevin’s perceptions and understanding of himself, his beliefs, and his life goals.

However, unlike during “International Assassin”, there was an added level of weirdness because Kevin was here playing two roles himself. Initially, he reappearing as his hitman alter-ego (in a very James Bond scenario on a sunny beach), only to be ushered inside a beach hut by nutty neighbour Dean (Michael Gaston) and informed he must assassinate the President of the United States before the Commander-in-Chief initiates a nuclear war. 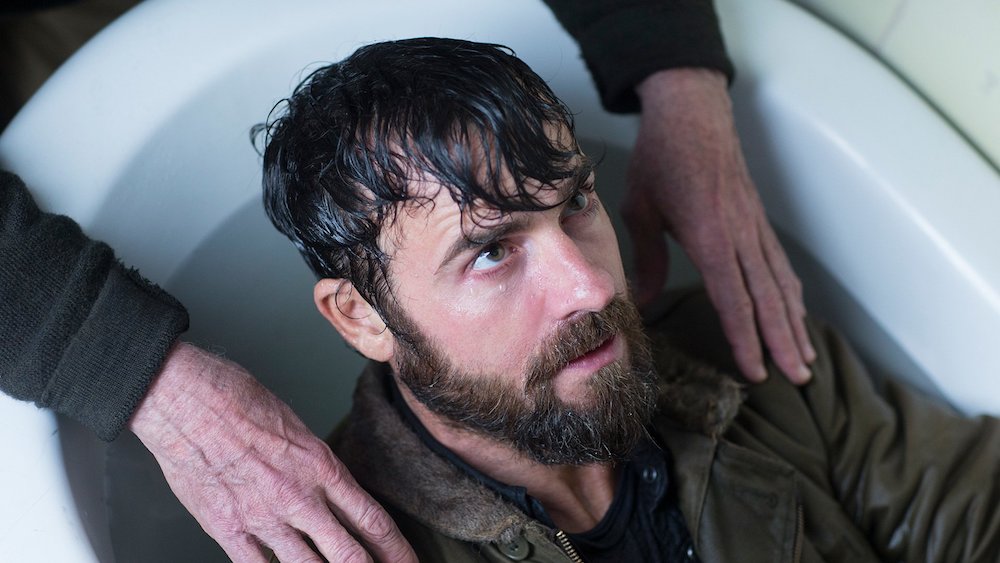 But, after peering into a reflective surface, Kevin instantly found himself ‘quantum leaped’ into the identity of a Guilty Remnant leader who’d been elected US President, essentially becoming his own intended victim. And while he tried to rationalise what this all meant, Kevin inevitably struggled with his three missions. Grace’s children (here appearing as competition winners) simply had no idea where their shoes went; the hardheaded Evie (ironically imagined as a GR protester) didn’t believe a word he said about her father; and, eventually, tribal chief Christopher Sunday (here becoming the Prime Minister of Australia) revealed he doesn’t have a chant that can stop rain from falling.

As before, the whole experience was more about Kevin coming to terms with himself than anything grander, to realise the error of his ways. This astral plane was once again very confusing, as you’re never quite sure who to believe, or trust, or what people remember of their earthly existences, but ultimately the experience leads “the visitor” towards a personal catharsis before they can return. And, just as before with the little girl and the well, it’s only through a moment of violence (opening up his twin’s stomach with a razor to retrieve a key) that Kevin’s able to leave this plane and return home — only now he won’t ever be able to return. 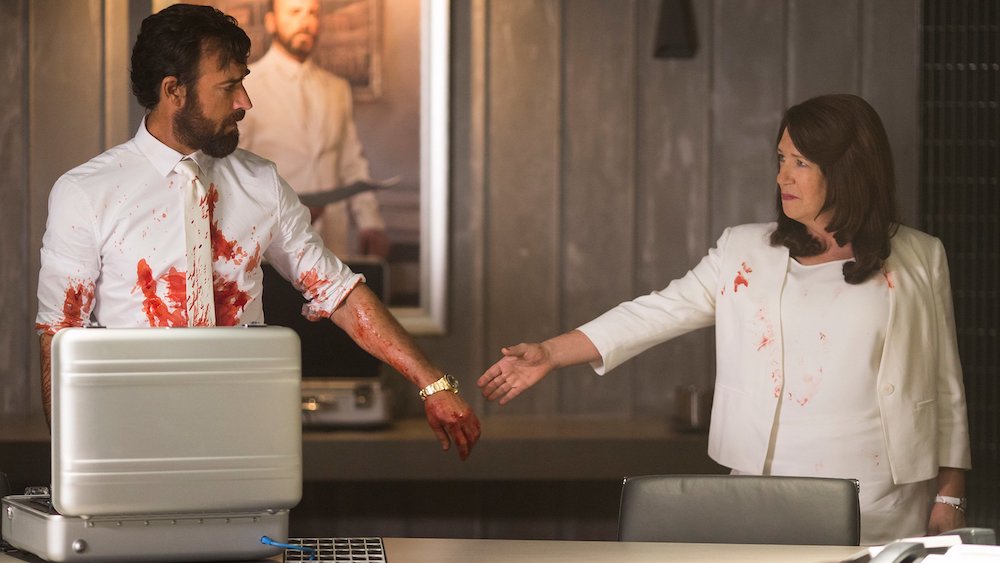 “The Most Powerful Man in the World (and his Identical Twin Brother)” was certainly another memorable hour you couldn’t take your eyes off, even if it felt more like a retread of a great idea from last season. Ultimately, Kevin’s time in limbo didn’t achieve very much this time, as none of his missions were successful (and they were a bit silly in general), but he returned home with added wisdom and clarity about his relationship with Nora. And, once back, he found his father sat on the ranch’s roof (echoing the Victorian family from the season 3 prologue) on the day of Great Departure’s seventh anniversary, after the storm had cleared without bringing the world to an end. Did Kevin have anything to do with this, in opting to nuke the opposing ‘mirror world’?

So where does this leave us ahead of next week’s series finale? Well, some of the season’s overarching concerns appear to have been wrapped up a week early. The season was headed towards an apocalypse, to either happen or be averted, but it turns out that was never on the cards. We’ve just been accepting that Kevin Snr. has a cosmic hunch about everything, that even his son found himself dragged along by. So with the end of the world failing to happen, I guess it’s over to Nora’s side of the story for the true ending.

The premiere’s flash-forward to an older Nora keeping pigeons in Australia remains hard to fathom, even six episode later, but it now seems likely the two scientists with the machine that can zap you to wherever the Departed went is going to fuel the finale’s story. But will we get a happy ending for Kevin and Nora? 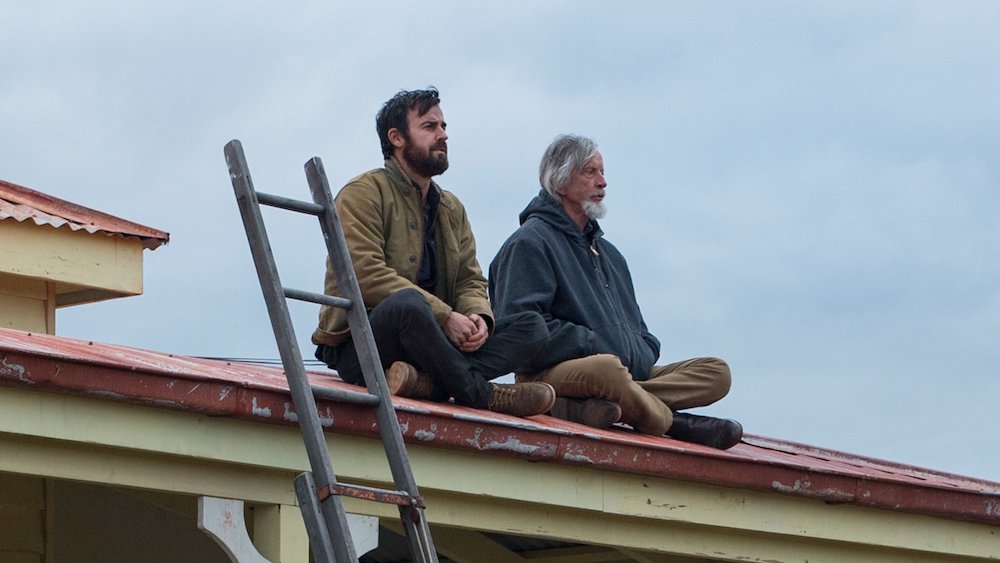 LEMONY SNICKET’S A SERIES OF UNFORTUNATE EVENTS – Season One