What is Evil Ed? That was my first reaction when it was announced for a Limited Edition release by Arrow Video. As someone who’s been into horror movies since before I should’ve been watching them, Evil Ed wasn’t something that had appeared on my radar. But when the press release compared it to such classics as Sam Raimi’s The Evil Dead, Stuart Gordon’s Re-Animator, and early Peter Jackson schlock, my interest was piqued.

Directed by Anders Jacobsson and starring Johan Rudebeck as Edward Tor Swenson, Evil Ed’s a simple tale of a film technician who goes slightly mad when he has to edit numerous pieces of nasty footage, but with a subtext about Swedish censorship.

What unfolds is one of the most bizarre and off-the-wall movies you could hope to see. Horror-comedy is a tough sub-genre to pull off, especially when the two genres are amongst the most polarising. If you go in accepting that none of Evil Ed will make sense, and that it’s going to be a nonsensical hybrid of ideas, then your expectations will probably be met. 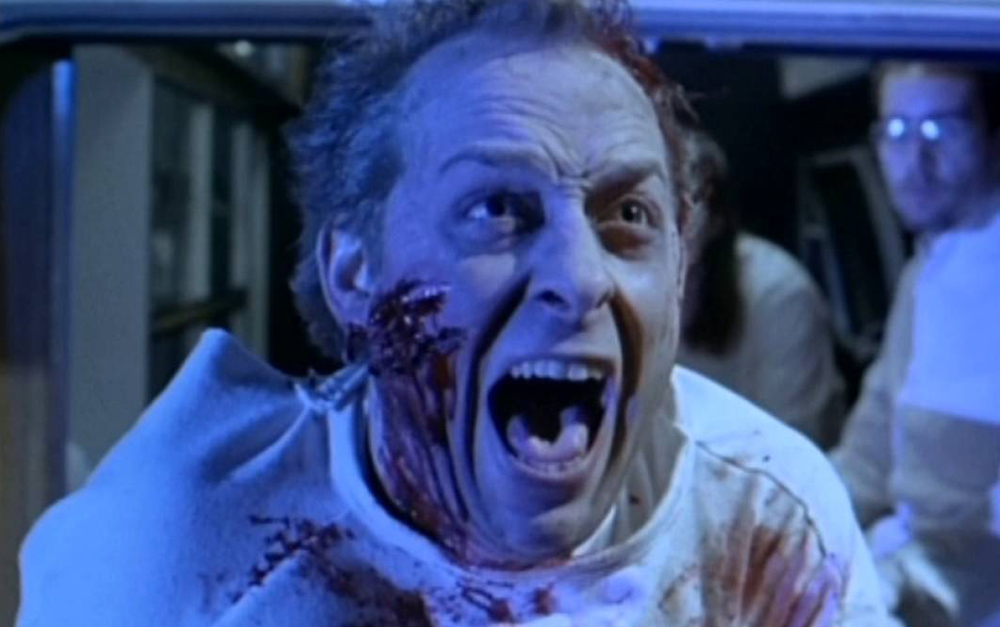 Ed is moved to work in the dark and dingy Splatter & Gore section, away from the store’s classier and cleaner Foreign Film department. This commentary on the film world is something many horror fans can relate to. Horror has always been one of the most under-appreciated genres, never quite taken seriously compared to other genres, yet it remains one of the most popular. Evil Ed is clearly made by film fans who drop various subtle references and really play into the stereotypical views that we’re all familiar with.

Ed’s work on the Loose Limbs series is what pushes him over the edge. This fictional series is the most popular company product, and despite Ed’s predecessor killing himself work goes ahead. It doesn’t take long for Ed to tumble down the same path towards madness, and we see numerous hallucinations of monsters, strippers, and something demonic that wants him to kill everyone. All of this mixed in with the commentary on editing Loose Limbs and what makes for a ‘good’ movie is an interesting attempt at discussing film censorship and who makes those final decisions. It certainly poses a number of questions that are still relevant today, such as the correlation between what viewers see onscreen and their own actions in real life. Such influences from film, television, and video games are still considered too much by many and the press often drag them up when a story needs some scandal.

If you’re looking for a well-made, well-acted movie then you’re definitely in the wrong place. Evil Ed looks like it was filmed by a university student who hired a camera for a day and got a few mates round to ‘act’ without much of a script. You’ll either love it or hate it. For me, as someone who enjoyed Bad Taste and Braindead, I have no issues at all with low-budget films offering no recognisable stars, and feel they can offer something different that most Hollywood movies can’t replicate. Much like the original Texas Chain Saw Massacre, less can often be more, and while Evil Ed never aims to be the scariest it does have some unsettling moments as well as some bizarrely funny ones too. It never takes itself too seriously and you shouldn’t either.

You can’t fault Arrow for going the extra mile on the additional content for this Limited Edition, though you may question just how much information you need to know about Evil Ed, but it’s there if you want it. If you do have an interest in making movies, foreign cinema and horror then you can learn a lot here from the openness of the director and writers, and it’s always good to have something a little different to your typical glossy Hollywood horror and endless remakes and sequels.

As a whole, this is another exceptional package from Arrow, and arguably more than Evil Ed really deserves. As terrible as it may be in places, there is enjoyment to be found and you will laugh and smile at times, and there’s definitely room in the horror genre for something a little bit weirder. While I can’t promise you’ll come out loving it, there’s far worse ways of spending an evening than watching Ed and his descent into madness.