To follow on from the billion-dollar box office success of 2012’s Skyfall must have been a bit of a daunting task for director Sam Mendes and his writers John Logan, Neal Purvis, Robert Wade and Jez Butterworth. While Spectre doesn’t quite match the winning combination of psychological intensity and spectacular action of the previous Bond outing, it makes an entirely fitting conclusion, given the rumours about Daniel Craig handing in his licence to kill, to the reconfiguration of the franchise since his first film, Casino Royale.

Warning: major plot spoilers for Spectre throughout. Proceed at your own risk.

The process of modernising today’s Bond began with the source material of Casino Royale, by stripping away the accumulation of outmoded tropes and motifs to get back to a grittier, deep-rooted insight into the world’s most famous assassin. Gradually, and particularly with Skyfall, the iconic symbols of the previous films were recombined with a more introspective version of Bond, inherent in Daniel Craig’s performance and the franchise’s response to shifts in contemporary action film culture and international political affairs. Spectre is the thematic culmination of this revisionism and the continuity established by Casino Royale.

The stark onscreen declaration that ‘the dead are alive’ and the opening scene set in the heady, surreal Day of the Dead festival in Mexico’s Zócalo set up the major theme of Spectre. The past disrupts the present and dead friends and enemies dominate Bond’s single-minded hunt for childhood ghosts. Essentially, this swaps Skyfall’s Oedipal relationship with Judi Dench’s M for a reunion with a long-dead father figure, Hannes Oberhauser, and Bond’s adoptive family. 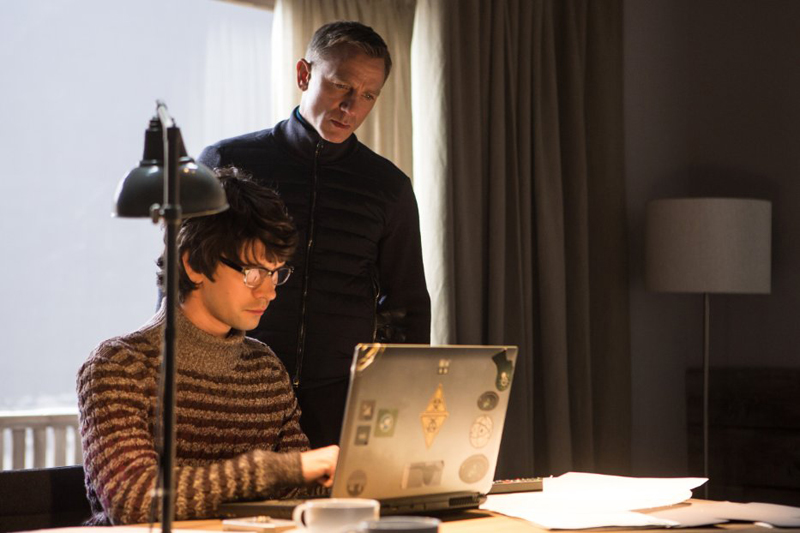 As Bond himself revealed in Fleming’s 1966 story “Octopussy”, Oberhauser was his ski instructor and “was something of a father to me at a time when I happened to need one.” Spectre is a film as much about the return of the repressed in the form of a disinherited adoptive brother as it is an examination of Bond’s ego, mortality and instinct for self-preservation in an age when masculinity is regularly atomised by social and cultural changes.

In probably one of the best openings to a Bond film, Mendes and his director of photography Hoyte van Hoytema utilise a long tracking shot, perhaps in homage to the Mexican border sequence in Welles’ Touch of Evil, to follow Bond, costumed as a skeleton (the death and mortality imagery à la Live and Let Die reinforced right from the beginning), as he leaves a hotel bedroom, prowls across a rooftop to assassinate Marco Sciarra (Alessandro Cremona), a terrorist planning to blow up a stadium.

Sciarra escapes an explosion that destroys the building (the first of many fetishistic, wanton scenes of destruction of property and vehicles that typify a Bond film) and in an audacious sequence is pursued on board a helicopter which, out of control and looping the loop, is the bone crunching, confined setting for the Bond and Sciarra face off. After pitching Sciarra and the pilot out of the vehicle, Bond flies off into the title sequence via the octopus emblazoned insignia ring that will lead him to the shadowy Spectre organisation. 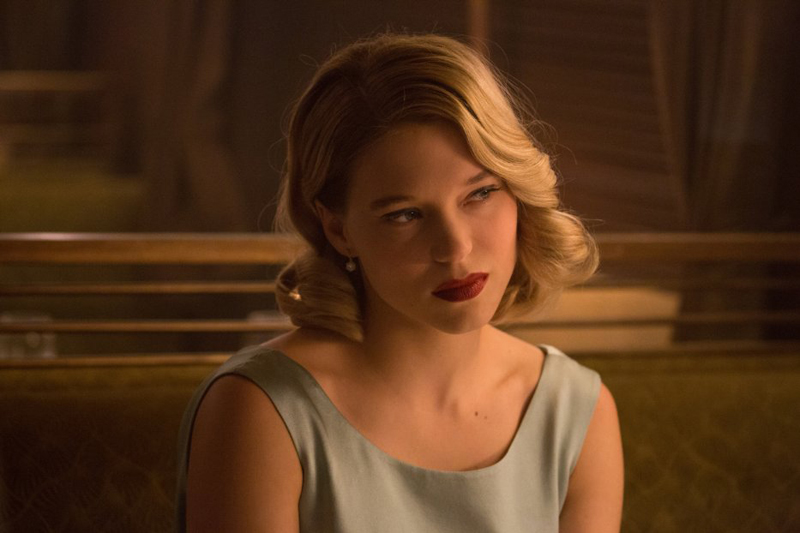 After Daniel Kleinman’s surreal and inky titles, a slew of Gothic images propping up Sam Smith’s thin Bond title song, the film initiates its sub-plots. Even though the former M (Judi Dench) ordered the assassination of Sciarra from beyond the grave, Bond’s unauthorised exploits in Mexico result in his suspension from duties. Moneypenny (a sorely underused Naomie Harris) visits Bond in his spartan flat (its austere emptiness speaks volumes about its occupant) with the recovered personal effects from the ruins of Skyfall estate.

This spectre from the past prompts him to track down Sciarra’s widow. Simultaneously, the double-O section is about to be replaced by ‘Nine Eyes’ an all encompassing joint international surveillance system using drones and satellites instigated by the smarmy, reptilian civil servant Max Denbigh (Andrew Scott). M (Ralph Fiennes) desperately attempts to vote down the changes at a conference in Tokyo while Moneypenny and Q (a delightful Ben Whishaw) rally to Bond’s side.

These narrative strands weave together as the film progresses. It’s rather obvious that Denbigh, code named C, is working for MI6’s opponents, joining a long line of Spectre associates that include Le Chiffre, Raoul Silva, Quantum’s Dominic Greene and the enigmatic Mr. White, a familiar face from as far back as Casino Royale. A funeral encounter with Sciarra’s widow Lucia (a similarly under utilised Monica Bellucci) launches Bond on his string of travelogue and action set pieces. 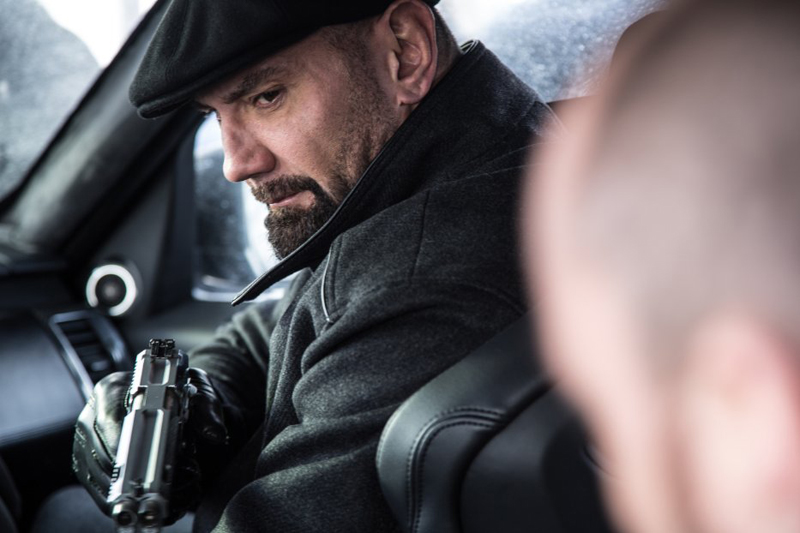 From Rome, eavesdropping an a Spectre executive meeting chaired by Hannes’ supposedly dead son Franz Oberhauser (Christoph Waltz) and escaping via a perilous car chase, Bond reaches Austria and his final encounter with Mr. White. White’s gun savvy daughter Dr. Madeleine Swann (Léa Seydoux’s psychologist a Proustian in-joke given the film’s predilection for nostalgic regression both political and cultural) becomes the love-hate object of Bond’s protection, again underlining the theme of dysfunctional families scattered into the plot and Bond’s nature akin to “a kite dancing in a hurricane”.

The locations and spectacular stunts deliberately evoke the traditions of the franchise. Austria features a clinic, Swann’s workplace, perched atop snow-capped mountains like Blofeld’s headquarters Piz Gloria in On Her Majesty’s Secret Service and a wintry battle between a plane and several cars. In Morocco, on board the Oriental Desert Express, Bond endures a punishing fight with Hinx (Dave Bautista), Oberhauser’s imposing Oddjob of a henchman, that mirrors the famous train fight in From Russia With Love. Finally, he’s brought to the villain’s lair tucked away inside a meteorite crater that’s not quite the envy of Ken Adams’ incredible volcano base featured in You Only Live Twice.

These kisses to the past even go as far as white cats and their owners with the return of Blofeld himself, the name adopted by the purring, Nehru besuited Oberhauser, Bond’s aforementioned vengeful adoptive sibling. Naturally, the villain tortures the hero by drilling into his skull to eradicate long suppressed anxieties and which is a nod to the equally hideous torture sequence in Kingsley Amis’s 1968 first continuation of the Bond novels, “Colonel Sun”. Predictably, with one leap, an exploding watch and not a mark on him Bond and Madeleine are free and briefly framed against the fireball demolishing Blofeld’s crater. 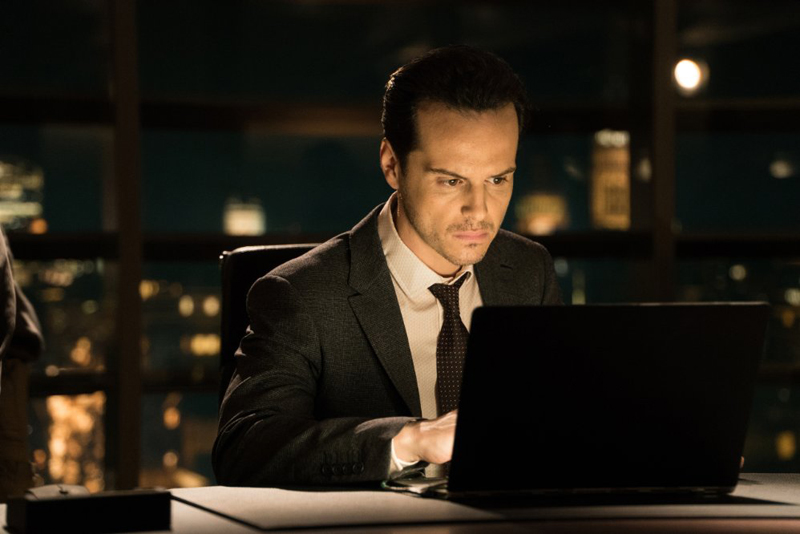 The problem is that Bond’s inner angst about his family trauma and the return of his sadistic childhood friend isn’t powerful enough to drive the narrative. Despite Waltz’s superb casting and delicious performance, after two thirds of the film Blofeld’s attempt to control the world through surveillance and overcome his ‘daddy’ issues feels weak and stumbles to its resolution in London. Unlike Skyfall, the action sequences rather than the unpacking of hegemonic masculinity are burdened with a 148-minute running time and they just about stave off potential tedium.

The coda of Bond rescuing Madeleine from Blofeld’s clutches in the ruins of MI6’s Vauxhall Cross H.Q as C gleefully demolishes the building is yet again a return to the male terror of uncertainty in a rapidly changing world. It is figuratively described as Bond races through the gloomy, fire damaged corridors of MI6 against a countdown that will usher in this ‘new world order’. However, it is Bond’s logical family—the resolute M, the clever Q and the instinctive Moneypenny—who get a welcome opportunity to go into the field and scupper C’s attempt to replace the masculine British tradition of the double-O service with something that would give Edward Snowden nightmares. Fiennes gets a wonderful one-liner in the process too as Andrew Scott nosedives out of his own steel and glass erection: “Now we know what C stands for… careless.”

Spectre is a good Bond film, but not a great one. It is spectacular but hollow, entertaining and yet ridiculous, and Mendes does rest on the laurels of Bonds past rather than push into new territory. Craig continues to add flesh to Bond, with a performance that manages to inject some much needed dry humour into what a nihilistic thug in a tuxedo says about our desire for this fantasy of masculinity.