It’s strange to remember Kevin Bacon was a teen heartthrob, as he’s spent the best part of 25 years transforming into a character actor. When you watch Footloose, however, it all comes back, and the film itself is an odd reminder of how cheesy 1980s movies could be.

1984, in general, was a bumper year for movies: hits and future cults were released like Dune, Indiana Jones and the Temple of Doom, Ghostbusters, and, well, 1984. In that company, Footloose was essentially the High School Musical of its day: popular and catchy but as dense as a pile of bricks. 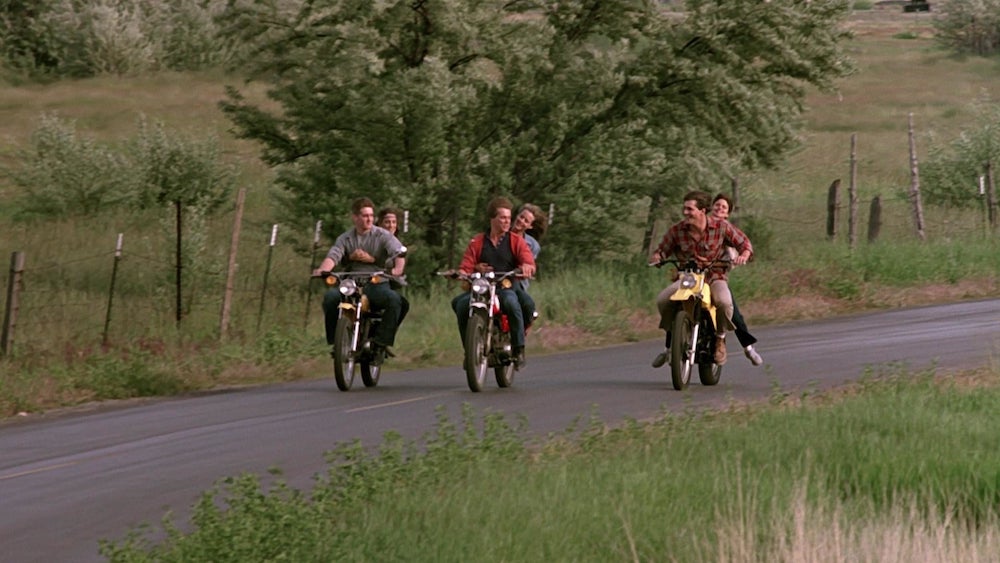 Just like High School Musical 3 (2008), this movie was a box office smash, becoming the 8th most popular film of 1984, making more than 10 times its budget, and placing ahead of A Nightmare on Elm Street, This is Spinal Tap, and Purple Rain. It’s impressive how well-constructed Footloose is for the masses: Kenny Loggins (i.e. the King of the Movie Soundtrack), paired with the first-time screenwriter Dean Pitchford (who, as a songwriter, wrote the track “Fame”), and director Herbert Ross (Pennies from Heaven), crafted a film about the power of music.

Ross wasn’t even not supposed to direct it, as Paramount Pictures had hired Michael Cimino to helm Footloose when earlier negotiations with Ross stalled. However, Cimino started making Heaven’s Gate-level demands and wanted to rewrite the script to be more of a Grapes of Wrath-inspired comedy, so Paramount fired him and hired Ross (who was also responsible for all the memorable dance scenes, being a former choreographer). Can you imagine what would have happened if Cimino had directed Footloose? We definitely wouldn’t have gotten a cheesy teen movie, that’s for sure. 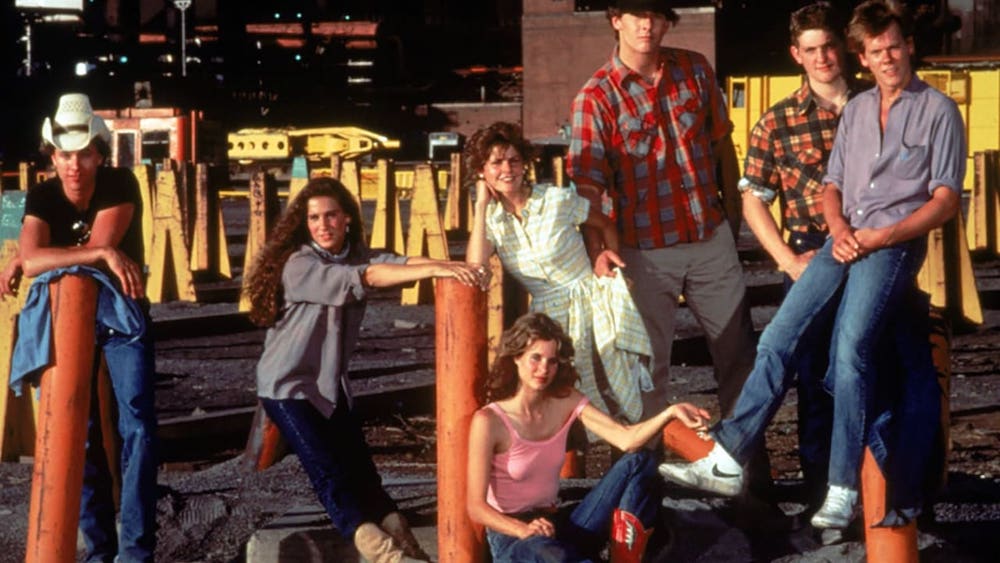 Footloose came out the same year (months, in fact) before other seminal teen films Sixteen Candles and Splash, and was predicated by Risky Business, which saw Tom Cruise in his memorable skivvies. That movie actually put Cruise in the running for the lead role of Ren in Footloose, but scheduling conflicts with All The Right Moves (1983) put Kevin Bacon, fresh off his breakout role in Barry Levinson’s film Diner (1982), in the spotlight instead.

Interestingly, Bacon gave up the lead role in John Carpenter’s adaptation of Christine (1983) for this film, which begs the question: would Bacon have been able to still achieve the same amount of stardom at the time if he’d chosen Christine, a minor cult classic, over this instant box office smash? In any case, Bacon milks this movie for all its worth; when the movie first came out, it launched him to stardom as the next handsome (and cocky) ’80s male lead. 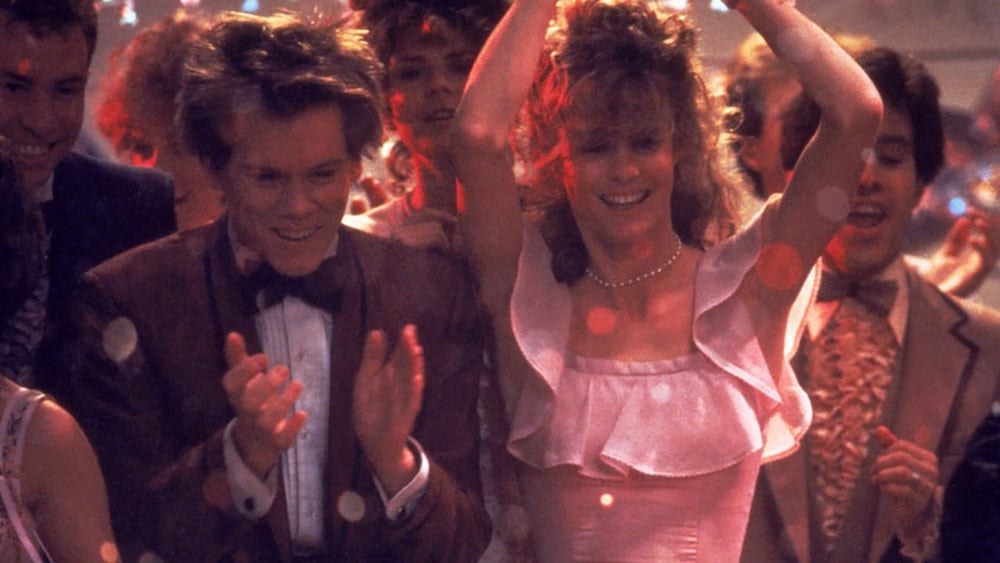 The ’80s were a spectacular time for actresses, too: while Lori Singer took on the role of Ariel, other auditioned actresses included Daryl Hannah (who opted for Splash instead) and Madonna, who would’ve made her film debut here. Instead, the breakout female star in Footloose was Sarah Jessica Parker, who took on the supporting role of Rusty after her Square Pegs (1982-83) TV co-star Tracy Nelson pulled out. She’s luminescent here in a very early role, stealing every scene she’s in.

It says something about Footloose that the film wouldn’t have worked without its stars turning on the charm. The plot is clunky and cheesy and the dialogue is very stilted. The plot twist towards the end, when we find out why the Reverend (John Lithgow) is so antagonistic towards dance and drinking, is squandered and executed just so the Reverend can’t be considered a stereotypical villain. The other characters all seem to be pulled out of a 1950s handbook of cliched rebellious teens, a la Grease (1978), and it’s cringe-inducing watching these actors try to pull off emotional depth when the film doesn’t spend any time building up their backstory or character. Each time a long conversation starts, one wishes they’d just skip to the music video-worthy moments (of which there are many). 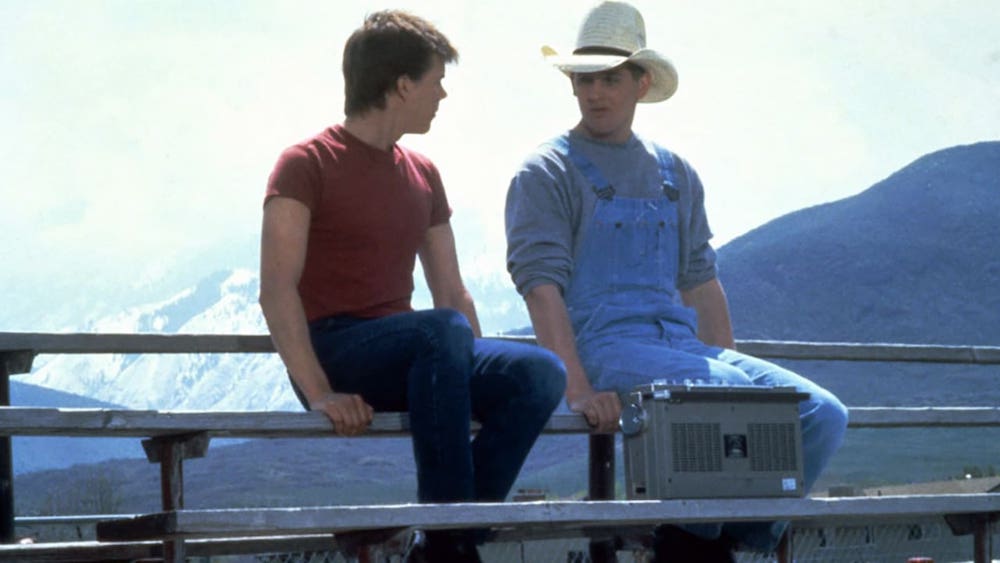 Footloose is best-known for its dance scenes; from the infamous warehouse dance scene that required multiple stunt and dance doubles for Bacon, to the country bar and the prom scene in the climax. Even from the opening frame, it’s clear to the audience that the music is built into the film’s DNA: the opening credits play to a slew of dancing feet, accompanied by the title track. Yes, and it went on for three full minutes of just that!

Then there’s the actual title song itself! Even 35 years later, it’s still a fantastic earworm, although it lost out to ‘Best Original Song’ at the Oscars to “I Just Called To Say I Love You” from The Woman in Red (1984). In the end, the song itself is definitely the most memorable part of Footloose, because almost everyone has heard it in the decades since, regardless of whether or not they’ve seen the film. 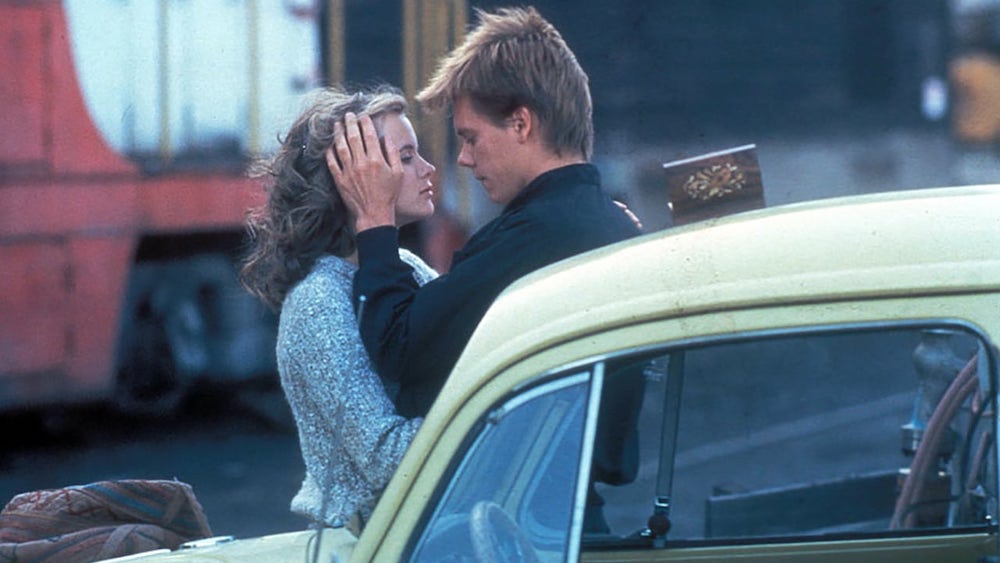 Although Footloose wasn’t critically well-received, it was popular enough that they remade it in 2011 with dancers Kenny Wormald and Julianne Hough in the Ren and Ariel roles. Rewatching the original today, it’s clear the ’80s cheesiness was part of the charm, which the remake toned down and tried to make the teens genuinely cool. They diluted the ridiculous (yet surprisingly true) premise of the film, too. It probably helped that the original Footloose was released during the teen film craze of the early-’80s so, over the years, it’s been lumped together with other teen hits of that era, even though it clearly isn’t as good as all the others.

Footloose is a relic of silly ’80s films: the plot is clunky, the dialogue is heavy-handed, and the cinematography is like from a garish music video. It won’t tug on your heartstrings, nor will it make you swoon, so if you decide to watch it again don’t expect it to have aged well. However, it’s undoubtedly a fun romp due to the music and dance scenes. You cannot, and will not, be able to resist humming along and tapping your toes with a smile on your face while watching it.