14 years later, and the Parr family haven’t aged a day. Incredibles 2 leans heavily into nostalgia by laying a path into unfamiliar terrain; allowing the story of the Parr’s to continue, uninterrupted, from the last moment the audience saw them, over a decade ago.

It’s clear that director Brad Bird and Pixar have been paying attention to the audience fervour over the original Incredibles, and through shorts like “Jack-Jack Attack”. Instead of moving the story years ahead to see invisible daughter Violet (Sarah Vowell), super-fast son Dash (Huck Milner), and bay Jack-Jack as adults, Bird astutely decided to retain the focus on the original superhero family. He knew there are more stories still to be told there, especially when it comes to the youngest member of the super-family. It also means there’s the potential for another few Incredibles films, perhaps slowly showing the passage of time.

This is a brilliant storytelling choice, as it also allows audiences young and old to approach the story on the same level, regardless of their age or the number of times they’ve seen its predecessor. It also eliminates the need for time jumps or flashbacks, both plot devices that can easily slow down the currently unfolding story. There is, however, an expectation that audiences will remember the original, so the first 15-minutes might be confusing for those who haven’t seen it for awhile.

Incredibles 2 begins with father Bob/Mr. Incredible (Craig T. Nelson), his wife Helen/Elastigirl (Holly Hunter), Violet, Dash, and Jack-Jack, back in that same parking lot, facing off against supervillain The Underminer. However, just because they all have masks now doesn’t negate their same position within the family duties, which ends up getting in the way. Rick (Jonathan Banks), a government agent tasked to protect them (and the wielder of a mind-erasing beam), thus has to shut the department down, leaving the superhero family in the dust. Luckily, there’s a mysterious (and super rich) fan called Winston Deaver (Bob Odenkirk), who wants to legitimise superheroes…

Changing public opinion on any matter requires a human touch, so Elastigirl, the least destructive of the bunch, is sent out to save lives and win the hearts of the people… while her husband stays home with the kids.

I have to say the trailers were worrisome, as they seemed to adhere to dated comedic situations surrounding the idea of a ‘macho father trying to take care of the children’, but Incredibles 2 manages it spectacularly. Yes, Bob does struggle with being the homemaker, but it’s played with great honest and has plausible moments one would expect from a family having to deal with this change in dynamic. Bob has to lean on friends like Frozone (Samuel L. Jackson) and Edna (Brad Bird) for help, with the latter having one of the funniest interactions of the movie with young Jack-Jack.

This sequel doesn’t flinch from real-life; one where family dynamics are rapidly being redefined in the age of gender equality. It’s not about mom coming back to save the children, or about dad being the macho hero anymore, and Pixar knows that, despite its own abysmal rates when it comes to female directors or writers. (The preceding short film, Bao, is the first directed by a woman, Domee Shi, in the company’s 32-year history.) Audiences don’t just get a pretty picture, we see Bob struggling with jealousy while still trying to support his wife as best he can.

And as dad learns how to manage a home, mom is the one getting big action sequences and playing detective, who also has great conversations with master inventor Evelyn Deavor (Catherine Keener). It works especially well because we’ve already seen the inverse of this, as the first movie’s action revolved around Mr. Incredible sneaking out of the house to be a superhero.

This doesn’t mean Incredibles 2 sacrifices he laughs for seriousness. Instead, it only heightens the laughs while allowing quiet conversations about social issues to happen in the background. There’s actually an impressive amount of comedy and a great sense of pace, thanks to Bird’s ability to balance laughter with tense action sequences.

Much of this humour revolves around the emerging abilities of little Jack-Jack, who steals this movie. The Parr’s baby doesn’t have control of his super-powers, resulting in many of the funniest parts of the movie. All parents will recognise the pain and ridiculousness that comes with handling a baby, let alone one that can turn into a fireball at will. Even with Violet and Dash helping out with their sibling, Jack-Jack continues to be the most overpowered of the bunch, leading to a wonderful series of running gags involving cookies. 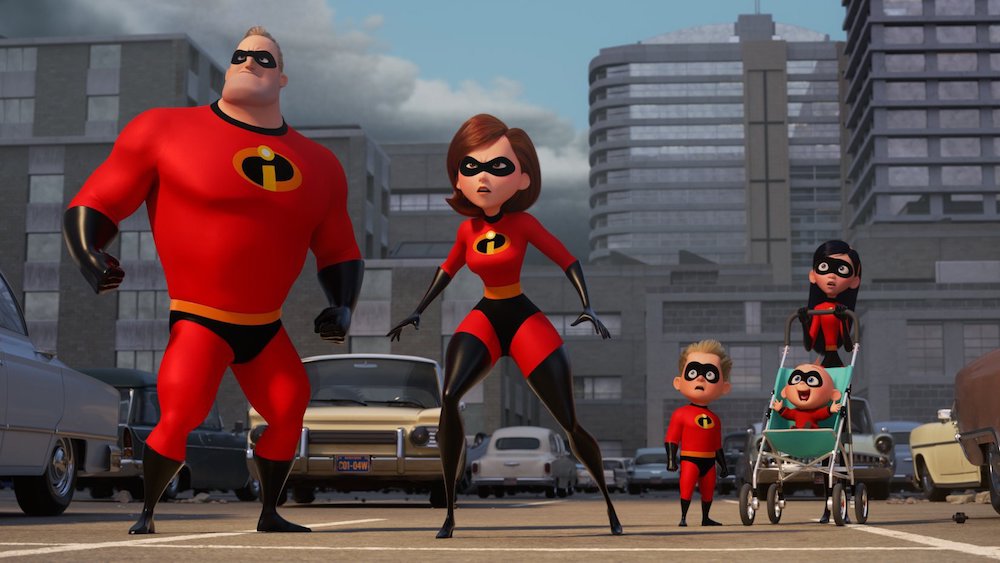 The family are helped by friends, old and new, including some heroes we’ve never seen before. They’re sidelined, however, in order to keep the action on the Parrs, but their existence raises the possibility for spin-offs now there’s an expanding world of active superheroes in the Incredibles universe.

Production-wise, this is classic The Incredibles; the look and feel of things is almost identical, but with stylish new effects during the action sequences with Elastigirl and fight scenes with hypnotic supervillain Screenslaver. There’s a lot of flashing lights on screen, but as with the rest of the movie, it’s utilised in a film-noir style. The opening sequence, where the Incredibles 2 logo and colours take over Sleeping Beauty’s castle, is simply stunning.

If anyone was looking for a reason as to why Pixar’s movies have so much heart, they need only to compare The Incredibles and Incredibles 2. For a long-awaited sequel to one of the great superhero movies in popular culture, Incredibles 2 makes full use of its 118-minute runtime, delivering a great balance between action and heart. Nobody who saw the original will dislike this sequel, and its humour is universal enough to attract some new fans.