Wes Craven’s The Hills Have Eyes (1977) is a classic of horror’s Backwoods Brutality sub-genre. Combining his previous exploitation flick The Last House on the Left (1972) with The Texas Chain Saw Massacre (1974), Craven was becoming a true professional scaremonger. From there, Craven found mainstream success with A Nightmare on Elm Street (1984) and it propelled him to the forefront of the horror genre from the late 1980s onwards. The first half of the ’80s were certainly an erratic time for this icon of horror…

It’s difficult to believe someone behind The Hills Have Eyes could follow it up with several turkeys. After flops like Deadly Blessing (1981) and Swamp Thing (1982), the director’s career was slowly descending, so a sequel to his ’77 hit was in order. The Hills Have Eyes Part 2 (1984) was fraught with problems from the outset. After the production was shelved due to budgetary restraints, it almost never saw the light of day. Two-thirds of the feature had been shot in 1983 before Craven found commercial success with Freddy Krueger. After realising he could flesh out the running time with flashbacks and claiming he “needed the money”, the studio allowed him to finish this follow-up. 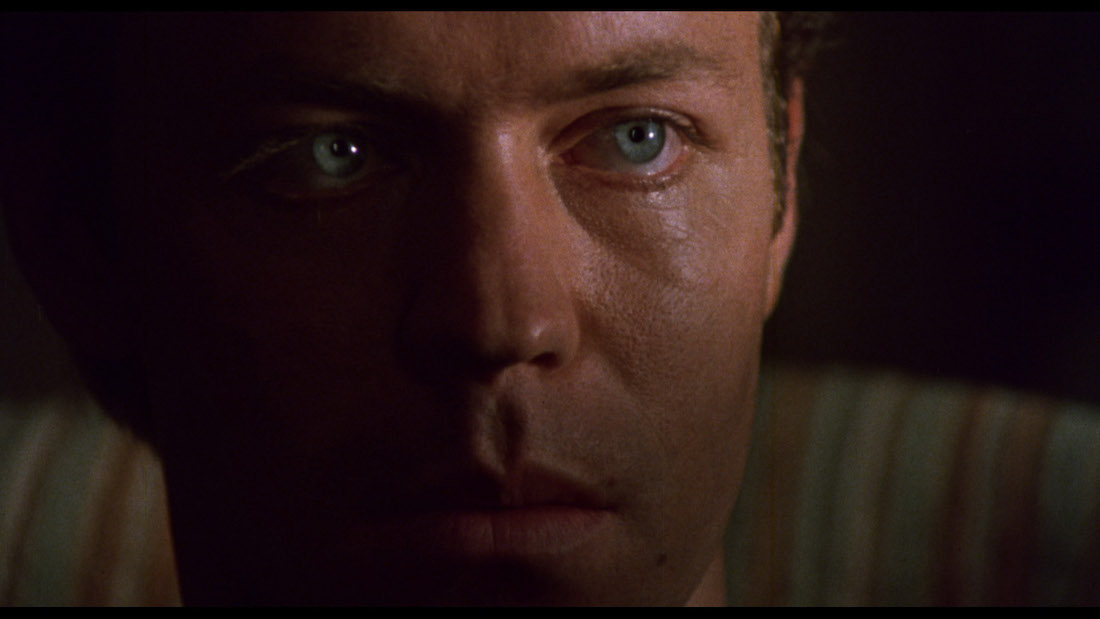 Eight years after the events of the first movie, Bobby (Robert Houston) is still in recovery from the brutal murders and attacks on his family. Now grown-up, he owns a motorbike garage that sponsors dirt bike racing and is happily married to Ruby, née Rachel (Janus Blythe). Bobby’s desperately trying to pick up the pieces and live a normal life. He later backs out of a contest after hearing his motocross team are on their way to the same desert to trial a new super-fuel. Rachel volunteers to lead captain Roy (Kevin Spirtas), his girlfriend Cassie (Tamara Stafford), and the rest of the dirt bike team. Opting to take an ill-advised shortcut across the desert, the busload of youngsters drive straight into the path of remnants of Rachel’s bloodthirsty clan.

The sequel features a reasonable cast of new and old faces. Kevin Spirtas (Friday the 13th: Part VII) and, making her debut, Tamara Stafford, are the highlights of the main cast. Stafford is a statuesque girl-next-door with flowing locks, whereas Spirtas is the caring boyfriend she deserves. The introduction of Cassie being a blind heroine seems like an interesting concept that could’ve led to a few unique and interesting situations. Understandably it’s not the actress’s fault, but I believe it was a great opportunity missed. As her first major role, I could see this being a difficult task for Stafford, although she moves around plausibly, handling and touching things in a convincing manner. These two characters along with Janus Blythe (Drive-In Massacre) are the only characters worth caring about. The remaining teens are what cripples the movie. Peter Frechette (The Kindred) constantly overacts, bringing an OTT energy that becomes grating. It’s satisfying to know they’re only here to add to the body count. 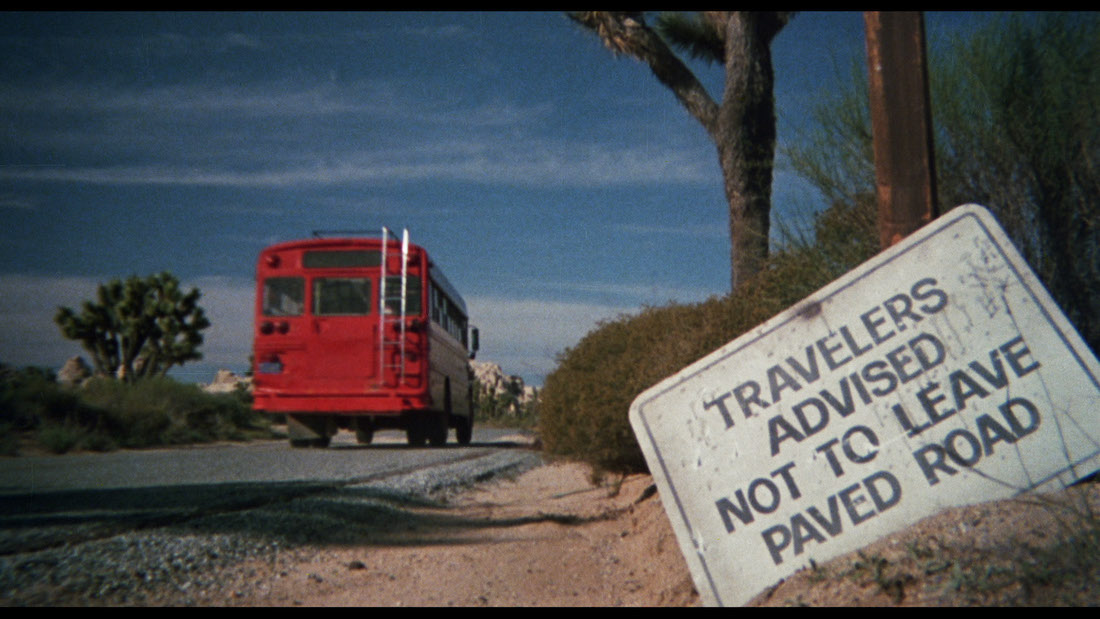 The cannibal family return to attack our unfortunate characters. Suffering from Hypohydrotic Ectodermal Dysplasia, Michael Berryman is typically fantastic. More recently seen as Clevon in Rob Zombie’s The Devil’s Rejects (2006), he returns in this sequel as freaky desert-dweller Pluto. He gets more to do here, too, including a gory throat slash that many horror fanatics will enjoy. Berryman makes Part 2 watchable and his character remains interesting and energetic.

John Bloom (Dracula vs. Frankenstein) plays Reaper, but in contradiction to the narrative of the first movie, he’s now the brother of Uncle Jupiter. Looking like an extra from Mad Max 2: The Road Warrior (1981), Bloom skulks around with a latex forehead, waiting in shadow to terrorise his victims, but doesn’t have any presence. It makes it difficult to find his character menacing. If you remember the actor’s role in Harry and the Hendersons (1987), you’ll also know why. Although both men do best with the script, reducing the enemy’s numbers to two sucks away the intensity. 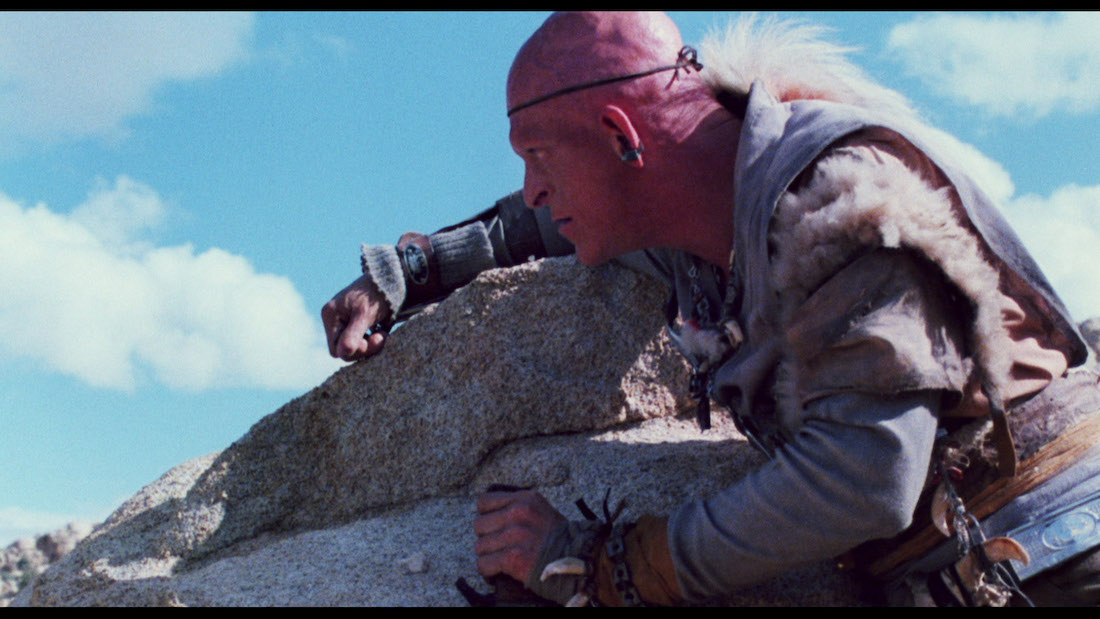 While the first The Hills Have Eyes was a cult classic and an important part of Wes Craven’s career, the sequel fails to replicate its brutal intensity and intelligence. The clever subtext of having the story centre around two opposing family units, clashing over harsh terrain, disappears in this sequel. Without focusing on the depths a mild-mannered middle-class family would sink to, in order to survive a group of cannibals, Craven steers away from exploitation horror and presents the setup more like a then-fashionable slasher. It has the aesthetic of the original mixed with a very derivative ’80s teen horror influenced by John Carpenter’s Halloween (1978). There are some stalking scenes, a killer with a machete, and a group of clueless kids, which was all in vogue during the 80’s horror cycle,

The popularity of Friday the 13th (1980) clearly influenced the evolution of this movie. A good Craven script paired with the teen horror genre was the base ingredients for his delicious 1990’s romp Scream (1996), but with such poorly written characters, unbelievably lazy screenwriting, and laughable practical effects, Hills Have Eyes 2 is laughably predictable. What made the first instalment unique was its feeling of isolation and being watched from behind the camera, together with the character development of both the heroes and villains. The sequel lacks this same atmosphere and heart. It feels like something Craven made while waiting for New Line Cinema to fund A Nightmare on Elm Street. 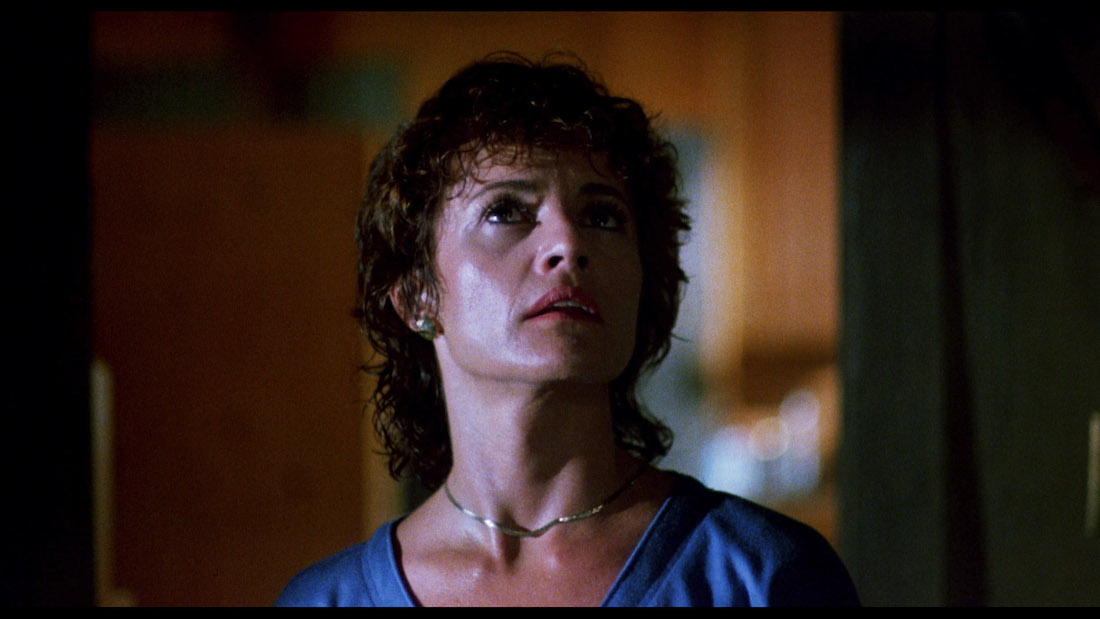 The plot feels like a rough draft and there’s no real explanation for some of what continued from the first movie. Instead of introducing characters that are walking cliches and tropes, it would’ve been interesting to see Craven focus on the relationship between Bobby and Rachel. It could have created an interesting story arc for them both, especially if they were to return to the desert and overcome their fears together. The fight sequence between Rachel and Pluto was also a missed opportunity. I feel this scene could have been presented on a larger scale as she confronts her older brother and demons of her past.

Perhaps, had the studio kept faith with Craven and allowed him to reshoot several scenes and focus on the original’s roots, then this sequel could’ve succeeded. Unfortunately, we’ll never know. It just becomes a repeat of the original, replacing a family with obnoxious teens making questionable decisions… like Jane casually taking an outdoor shower in the middle of the night, knowing trouble is lurking in the air. Rachel never once warns her companions that her cannibalistic family roam this area. Even the ending retreads the original, albeit with a larger fiery explosion. 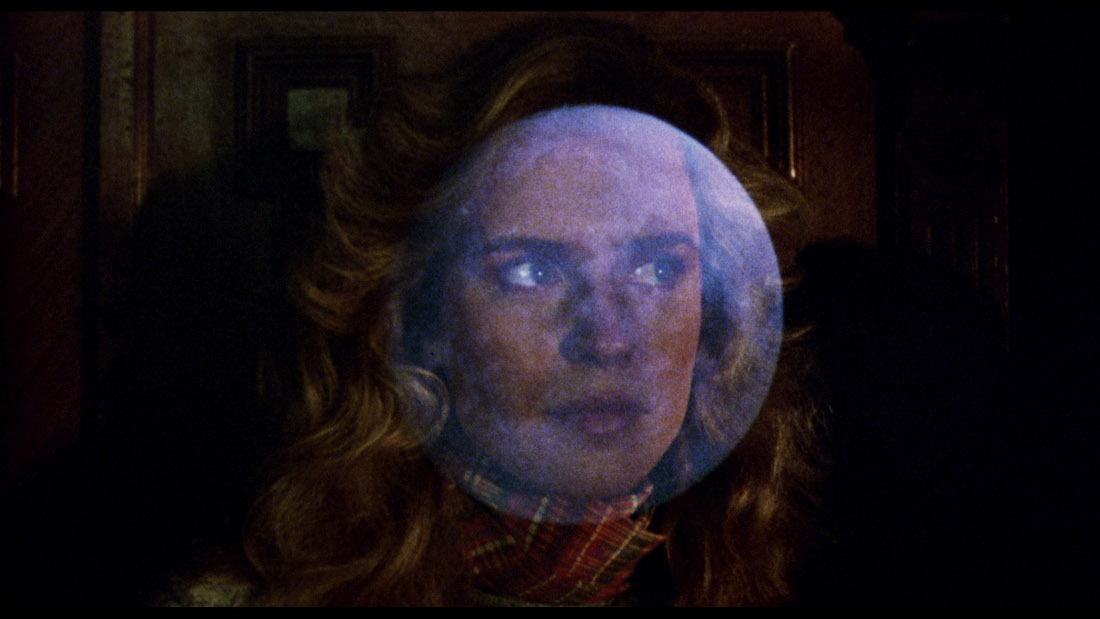 Still, as a fan of the macabre and knowing this picture is directed by the same man who created my childhood favourite People Under the Stairs (1992), The Hills Have Eyes Part 2 isn’t without some charm. The opening narration (maybe a homage to The Texas Chainsaw Massacre?) instantly sets an unnerving tone. Other positive aspects include the location of an old mining village. The eerie cinematography highlighting the neolithic desert makes Bronson Canyon look like a sinister wasteland. It’s very atmospheric and we see plenty of beautiful cinematography and good directing in the odd scene. Several of the foot chases and motocross bike sequences through the rocky cliffs are well-performance and edited.

Although Craven later disowned this feature, it still contains several suspenseful moments that showcase his abilities. A sense of dread washes over one as the blind character Cassie roams through creepy shacks as she’s stalked. Using only her hands to guide her, she stumbles around animal corpses and treads through puddles of her own friend’s blood without even realising. Craven even uses a reworking of Harry Manfredini’s score from Friday the 13th and David Lewis’s cinematography helps ratchet the tension. In one scene, as Cassie stumbles across a false refrigerator. she reveals a ladder descending into another seemingly bottomless mineshaft. Craven captures her discovery filmed from below, a gust of wind billowing through her hair as she has one arm extended into a void of the unknown. Everything is doused in an eerie crimson light, too, almost representing a pathway to Hell itself. 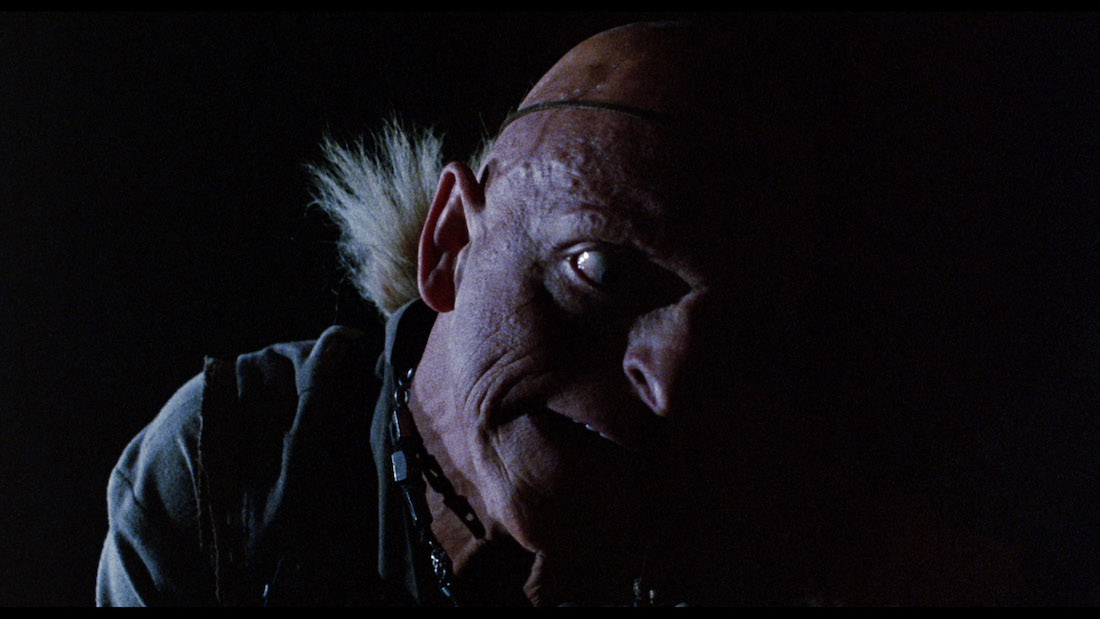 The Hills Have Eyes Part 2 is most famous for not having enough footage to make a releasable picture. The director’s method to remedy this was to include several flashbacks to the first film, recycling old footage. There had been a growing trend in this technique, with Godzilla vs. Megalon (1973) and Silent Night, Deadly Night 2 (1987) also using that trick. Several flashbacks with Bobby and Rachel can be seen as lazy storytelling but, as dumps of exposition, they still work. The most notorious flashback is one from the perspective of a German Shepard called Beast, although some claim it’s also the most memorable scene! I’d argue Craven intended it to be humourous, but most people failed to see the funny side. If one removed all the flashbacks, Part 2 would run less than 60-minutes…

While the direction is worthy of Wes Craven, to an extent, the script is where Hills Have Eyes 2 falls way short. It feels as if the visionary director dumbed down his art to appease the masses, due to the rising popularity of pictures such as My Bloody Valentine (1981) and Happy Birthday to Me (1981). I’d argue Hills Have Eyes 2 has flashes of potential. If Craven had focused more on the original characters of Bobby and Ruby, it could’ve been something much better. But if you’re a fan of ’80s cheesy horror, it’s an enjoyable enough slasher trash released from the era. And hey, it’s more entertaining than Craven’s Music of the Heart (1999). 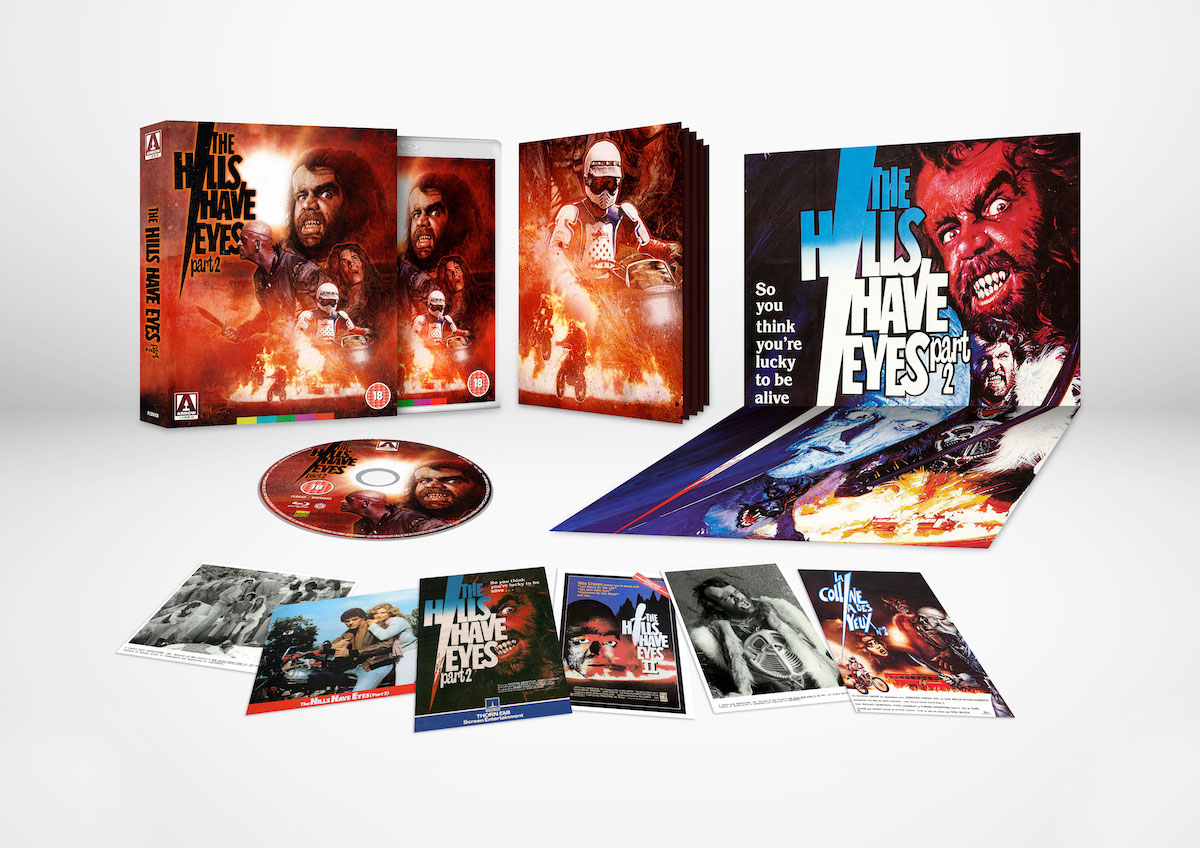