The live-action adaptation of R.L Stine’s beloved 1990’s children’s horror books found its way to cinemas in 2015. Directed by Rob Letterman, it was a successful children’s Halloween adventure using Goosebumps iconography and grossed $150M. Cleverly, it was less of a direct adaptation of Stine’s novels and more a love letter to the author’s legacy. Three years later, Ari Sandel (The Duff) replaces Letterman for a second instalment, Goosebumps 2: Haunted Halloween.

Halloween is fast approaching in Wardenclyffe, New York, and college-bound Sarah (Madison Iseman) is stuck at home babysitting her little brother Sonny (Jeremy Ray Taylor) and his best friend Sam (Caleel Harris). Whilst cleaning out a dusty old mansion as a part of their makeshift junk-removal business, Sonny and Sam stumble upon a strange book and, once opened, evil ventriloquist’s dummy Slappy (voiced by Mick Wingert) is unleashed and desperately wants to be accepted into the family. Once refused, Slappy sets about wreaking havoc on the town and bringing Halloween to life, as part of R.L Stine’s (Jack Black) unfinished manuscript “Haunted Halloween”. How the story ends will depend on whether or not these three kids are able to save the day. 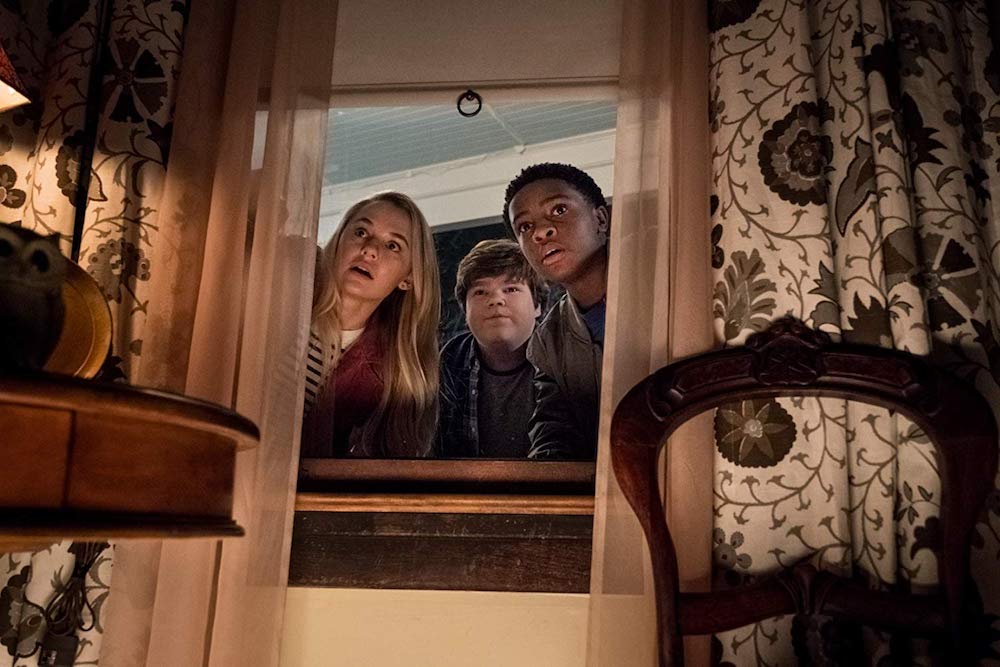 Veering away from original Goosebumps (2015) cast, here we’re introduced to new underdog children. Jeremy Ray Taylor (It) and Caleel Harris (Castle Rock) play standard teen nerds, being constantly bullied at high school due to their love of science. Madison Iseman (Jumanji: Welcome to the Jungle) plays the elder Sarah, Sonny’s sister, whose arc revolves around her fear of writing a college application. All three performers do the best with what they have to work with, making this sequel more watchable than expected. However, beside their throwaway subplots, the two-dimensional characterisations never break away from the types one expects from children’s horror stories. So each actor’s obvious talent is wasted by running and screaming.

It’s the seasoned comedy from the supporting cast that steals the show. Wendy McLendon-Covey (The Goldberg’s) has a thankless role as Sarah and Sonny’s adorable mum. More than any other character in Goosebumps 2, McLendon-Covey overcomes her archetype and makes her character feel genuine and intriguing. Ken Jeong (The Hangover) as the family’s weirdo eccentric neighbour Mr Chu, channelling his usual schtick but clearly having fun with the role and hamming it up. The adult characters are the true highlight of the movie, despite being under-used. 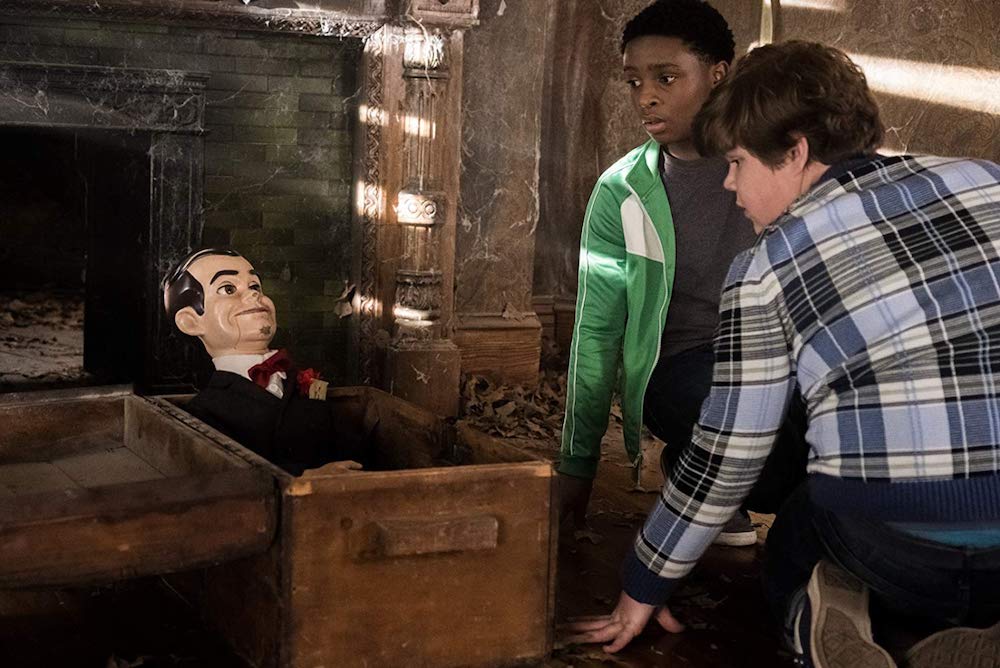 Perhaps the biggest disappointment is the lack of Jack Black (School of Rock), who reprises his meta-role as author R.L Stine… but has barely any screen time until the third act. Shame, as his appearance instantly lifts the movie and delivers some much-needed humour. Black was terrific in the original as a foil for the younger characters, and it’s great to see him tone down his act for a shift into family films. But without Black to keep the movie balanced throughout, Goosebumps 2: Haunted Halloween can never hope to match its predecessor’s edge.

Haunted Halloween comes loaded with monsters, and most of them are new creations you won’t find inside any of Stine’s novels—with the exception of returning baddies The Werewolf of Fever Swamp, The Abominable Snowman of Pasadena, and Slappy. Sony Pictures Animation work their magic to turn Halloween decorations and costumes into a source of kid-friendly menace.  A sequence centred around evil gummy bears delivered much the same cartoon energy as Army of Darkness (1992) when a group of tiny evil Ashes turned Bruce Campbell’s life into slapstick hell. 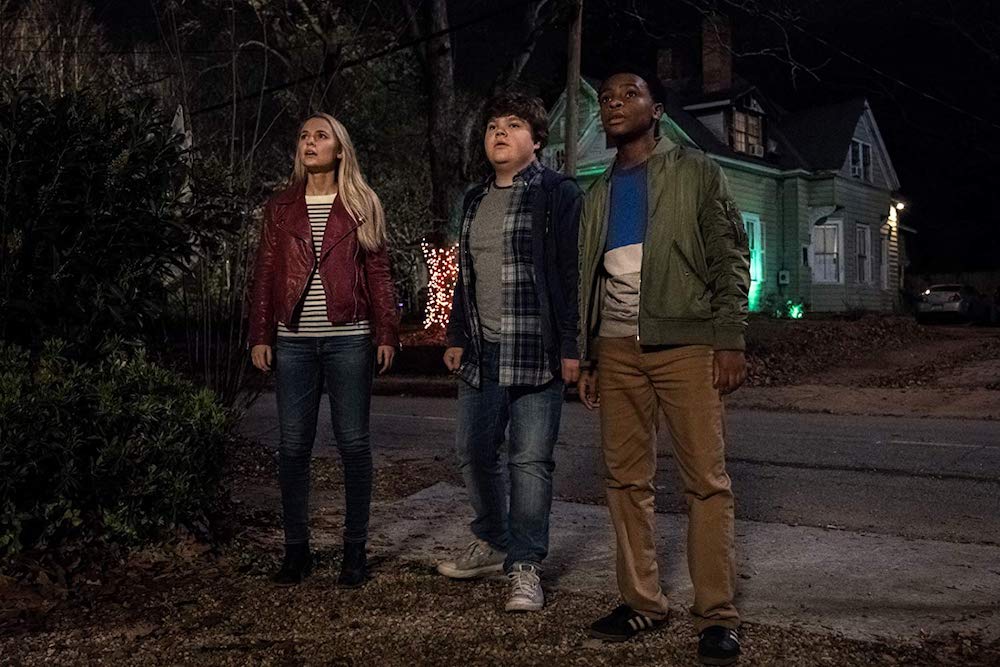 What makes Goosebumps 2 is the pacing and its keen eye for casting. As it runs to a brisk 90-minutes, the narrative also doesn’t lose pace. Much of the credit goes to director Ari Sandel, who does a commendable job of combining suspense and creepy storytelling with funny moments—much like the original Goosebumps novels did. Early scenes of Slappy in the family home carry an essence of Child Play (1988), and as the story progresses the movie starts to evoke ’80s cult favourite Monster Squad (1987). However, Rob Lieber’s script occasionally feels rushed and never takes full advantage of opportunities to scare and develop the characters.

Goosebumps 2: Haunted Halloween will certainly please its target demographic. It’s a Halloween romp intended for a younger crowd and doesn’t outstay its welcome for slightly older kids and adults either. Fans of the novels and the previous movie may be disappointed it’s quite repetitive, however, particularly with so much new material from Stine’s back catalogue left untouched.

It won’t stand the test of time like Halloween classic Hocus Pocus (1993), but this strikes a good balance between silly and scary.