This week on Game of Thrones, The Hound was reacquainted with some familiar faces in a forest, Arya’s seized her destiny, Tyrion’s schemes backfired, the castle siege reached an unexpected conclusion, and Cersei received some very bad news from her son…. 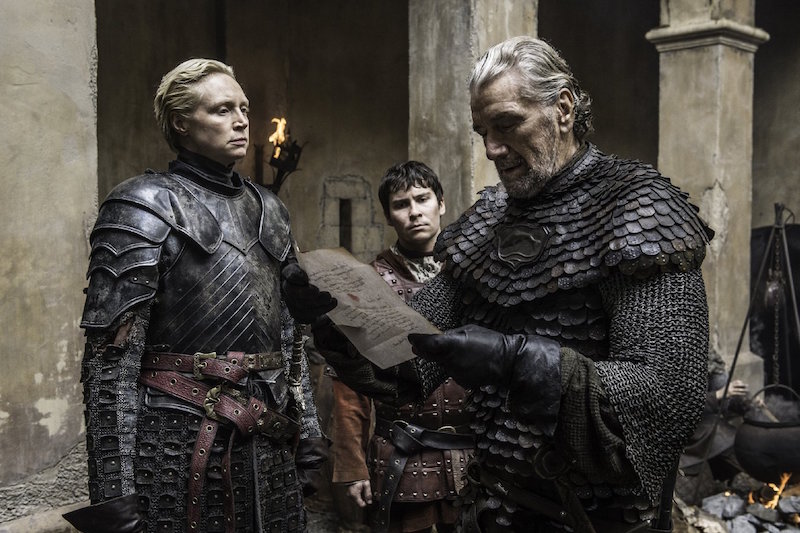 It was no surprise to anyone that The Hound (Rory McCann) would easily track down the Brotherhood Without Banners men who killed his friends, but less expected was him bumping into Beric Dondarrion (Richard Dormer) and Thoros of Myr (Paul Kaye) soon after. There seem to be lots of characters from earlier in Game of Thrones’ history coming back this year, and the suggestion that The Hound will find redemption by joining Dondarrion’s cause and heading north to fight White Walkers is a very juicy one. If nothing else, it’s just a lot of fun to watch The Hound. He’s brutal and funny, which are two of the show’s strengths when used well.

The major storyline in the Riverlands involved the culmination of The Blackfish’s (Clive Russell) siege, with Jaime Lannister (Nicolaj Coster-Waldau) concocting a devious way to ensure quick victory. The solution was very simple, really: threaten the wife and baby son of Edmure Tully (Tobias Menzies), to force him into ordering the castle drawbridge down, before continuing to have his men thrown down their arms. The Blackfish apparently died in a sword fight (do we believe this, having not seen it happen?), leaving Jaime with the castle to return to his family’s ally Walder Frey. It was such a simple solution, in the end, that a part of me wonders why it justified inclusion in this season’s story. I’m aware it’s an old plot from George R.R Martin’s books that’s been held back awhile — and I know lots of people who, frankly, struggled with it because they’d half-forgotten about the Tully’s. We just don’t seem to have really advanced the story very much, as the siege feels like more of an entertaining diversion.

The arrival of Brienne (Gwendoline Christie) was nice to see, mostly because it resulted in a reunion with Jaime. I really like the shared history those characters have together, and it was an emotional moment when Jaime decided to let Brienne keep the ‘Oathkeeper’ sword he originally loaned her. 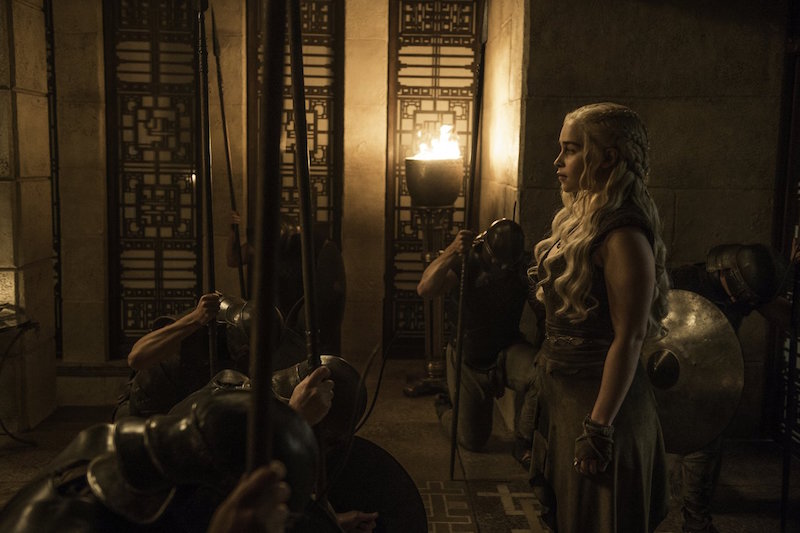 A day of contrasts for Tyrion (Peter Dinklage) this week. Things began promisingly, with everyday Meereen society returning to life again, thanks to the pro-Daenerys propaganda being put around by the Red Priestesses. With things looking up, Varys (Conleth Hill) decided to set sail for Westeros on a mission to find more allies and ships. I presume he won’t go anywhere near King’s Landing, so it’ll be fun to see his character in the frigid north. Unfortunately, the moment Varys left the city came under attack from a huge fleet of ships sent by the slave Masters. Tyrion’s shaky peace agreement was in tatters, with the city and pyramid being bombarded with trebuchet fire. It was slightly inevitable that Daenerys (Emilia Clarke) would then return, but I wish the moment had been shot better. It just felt a bit cheap having Drogon arrive as a sound effect, then for Dany to come storming in through the door. My prediction of what will happen next? Commanding her dragon to destroy the fleet is an option, of course, but it feels more likely the mutinous Greyjoys siblings will arrive and defeat the Masters — which will fortuitously make them flavour of the month with the Mother of Dragons. 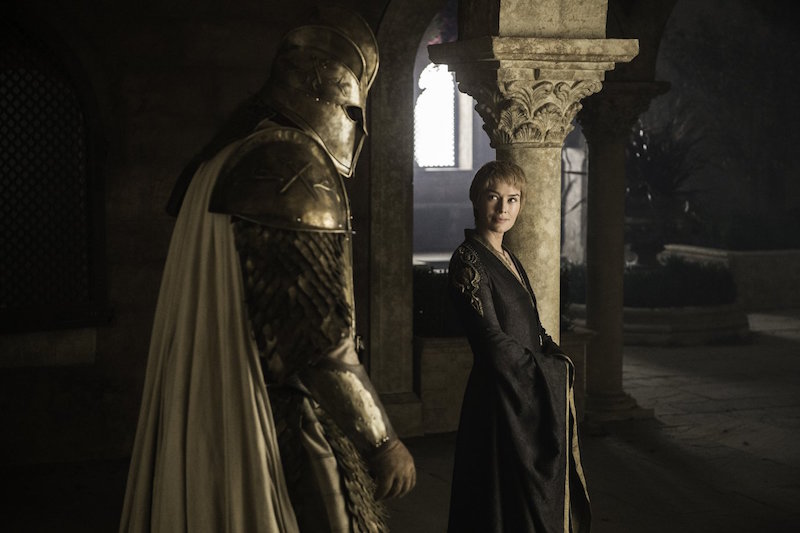 We actually got some very good scenes at King’s Castle this week. It was impossible not to secretly fist-pump when Cersei (Lena Headey) stood up to the Faith Militant, commanding The Mountain (Hafþór Júlíus Björnsson) to tear a man’s head clean off. And yet Cersei’s small victory didn’t last long. Summoned to the throne room, Cersei watched a royal announcement from her son, King Tommen (Dean-Charles Chapman), that ‘trials by combat’ are being outlawed. Cersei’s one chance to be proven innocent was snatched away by royal decree, by her own son no less. This doesn’t put Tommen in a very good light — a boy king willing to see his own mother’s chances of triumph be shot down, just because the High Sparrow whispered in his ear. Or is it more the influence of his Cersei-hating wife, Queen Margaery? She wasn’t present her, strangely, but it wouldn’t surprise me if the notion somehow came from her. 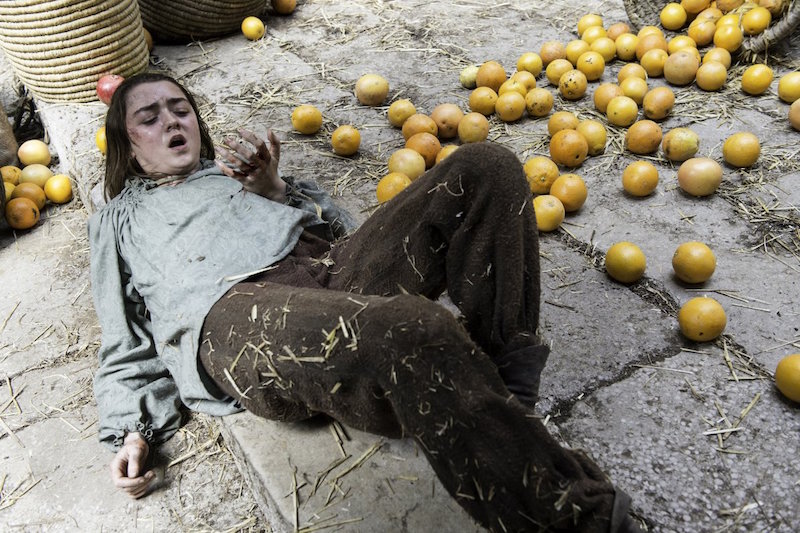 I can’t believe people seriously thought Arya (Maisie Williams) was going to die. I also don’t accept she could so easily survive the wounds the Waif (Faye Marsay) gave her last week, even with a bit of TLC from Lady Crane (Essie Davis). By the end of the episode, Arya was running and leaping around the city to avoid the Waif? It didn’t ring true to me. I think they went overboard with the stabbing last week to make a better cliffhanger. Still, I loved the moment when Arya managed to get back to her room and retrieve her sword Needle, to the bemusement of the Waif, only to slice away a nearby candle and plunge the room into total darkness. Advantage Arya. I was a little puzzled that Jaqen (Tom Wlaschiha) just seemed to accept that Arya had beaten the Waif, and that she doesn’t want to continue her training or lose her identity any more. She’s heading back to Westeros and he just accepts this. So what has Arya learned in two seasons-worth of plot? To fight in darkness, and that the Many-Faced God religion’s pretty crummy. 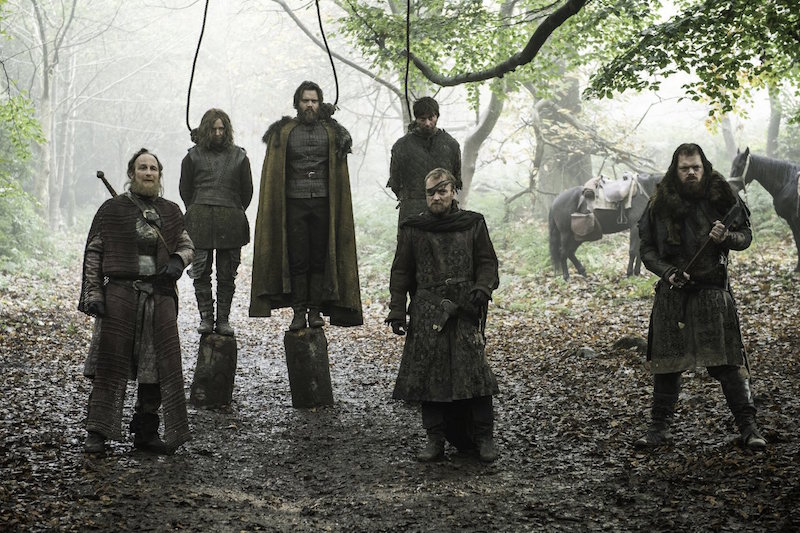 “No One” was another of those episodes that was never anything less than entertaining, but there were lots of anticlimactic moments and developments that bring us back a few steps. Tyrion’s clever plot with the Masters failed, because it did. Dany’s back with her dragon after her second Dothraki adventure. Arya’s headed home, so the entire Braavos storyline feels like a waste of time. The castle siege is over already. That means a lot of episodes, sometimes whole seasons, haven’t significantly moved events forward for key characters and stories. It can feel like Game of Thrones only really has one significant plot right now: the situation in the north with the encroaching White Walkers. Everything else marches on slowly, but several stories seem caught in a holding pattern. I can’t wait for things to start coming together more, and with the final two seasons rumoured to total 14 episodes before Game of Thrones ends… presumably next year’s going to be when the major pay-offs start happening.

HUMANS – series one, episode one