If there was any lingering doubt about how effectively Outlander would depict the battles of the Jacobite rebellion, then that doubt was extinguished in the superb “Prestonpans” this week. That this is Sam Heughan’s favourite episode also marks it out as a particularly interesting watch. It is by turns full of mounting tension, horror, and tragedy, and director Philip John communicates both the sheer adrenaline rush of hurtling into mass armed combat and the gorily realistic aftermath without ever being gratuitous or exploitative.

This a richly textured episode with its narrative covering the strategic debates and arguments of mounting a campaign, the risks of accepting unsolicited and unverifiable intelligence, and a sense of mortality and sacrifice while its visuals plunge the viewer onto an eerie, fog-bound muddy field and the charnel house chaos of combat as swords clash, cannons fire and blood and bodies fill the screen. 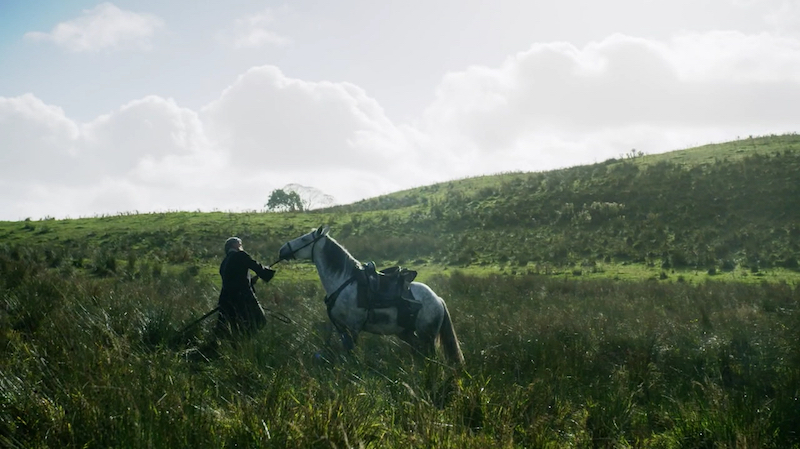 Certainly the battle sequence (which Jamie and Murtagh claim in real time lasts just 15-minutes) is right at the heart of the episode, but this blood-pumping focal point is fed by several quieter, more considered but equally important sequences. Take the opening scene with Claire’s (Caitriona Balfe) solemn observation, as she stumbles upon the decomposing corpse of a Jacobite rebel, she is about to witness the deaths of “far, far too many” men once again, having already experienced the devastation of the Second World War. There is nothing she can do to prevent these events from unfolding as Prestonpans was always, and will always, take place at four o’clock on the morning of 21st September 1745. The battle has already become woven into Jacobite mythology and history.

The war cabinet disparities between Charles Stuart (Andrew Gower, capturing the buffoonish incompetence of the man), Quartermaster John O’Sullivan (Gerard Horan) and Lord General Murray (Julian Wadham) present a frustrating clash of egos, of men who have differing points of view about the tack to take as the Jacobites seek a way to cross the treacherous, muddy field separating them from the British. In the middle of it all is the Young Pretender, trying with all of his will to make decisions and seek the right counsel but simply lacking the conviction to do so. Stuart is not cut out for this war, but he does show a modicum of courage when he leads the early morning attack on the British. But his indecisiveness is likely to be his ruin when it comes to the next battle at Culloden. 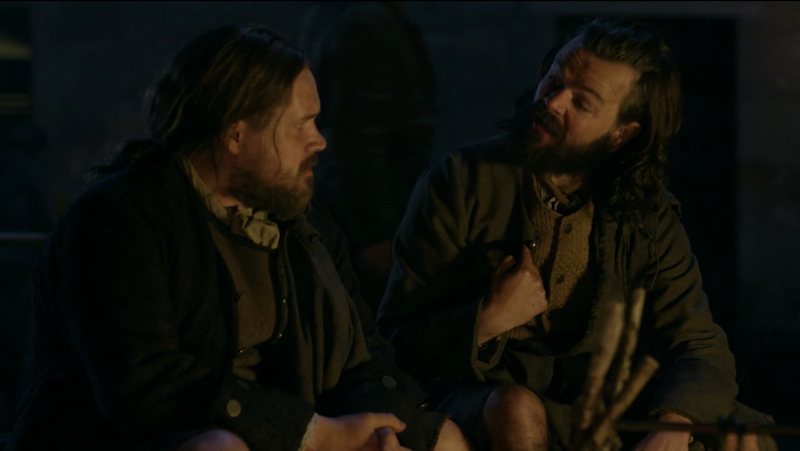 There is a further development in the stubborn relationship between Jamie (Sam Heughan) and Dougal (Graham McTavish) as a result of this confederacy of dunces. Both men have a mutual but begrudging respect for each other that threatens to crumble at any moment, but Jamie skillfully manages Dougal. He persuades him that the only way they can determine if the field is safe to cross on horseback and on foot is if one of them scouts ahead and tests the ground. Jamie’s diplomacy and ability to delegate also comes in very useful later when Dougal angers Charles Stuart in the aftermath of battle.

When Dougal is shot at while attempting to recover his horse from the muddy marshes (and craps himself into the bargain), Charles Stuart and his cronies are both delighted with his efforts and then thrown into terrible doubt as to how they will yet seek advantage over the British. Dougal’s efforts have confirmed they are unable to charge across the field. As they seek a solution, the episode concentrates back on Claire and Fergus (Romann Berrux) as she prepares, with her women volunteers, a field hospital in expectation of treating the many wounded from both sides of the conflict. It is a tender, moving scene that underlines the feeling of helplessness in the face of overwhelming odds that permeates this episode. The battle will be bloody, violent and unforgiving and when honeyed water is all you have to replace fluids and maintain blood sugar levels then it’s clear the women are asking themselves if this is uprising is really worth all this destruction. 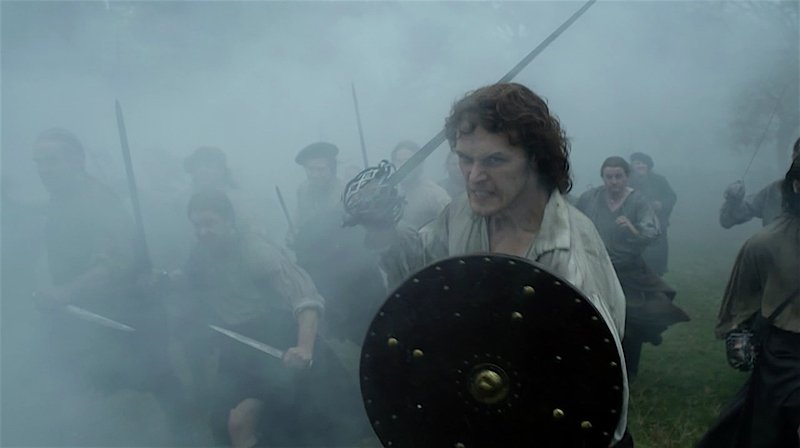 For Charles Stuart his deliverance arrives in the form of Richard Anderson (Alex Hope), a local farmer who knows the fields like the back of his hand and can show the troops a hidden safe route onto the field. Again the clueless Stuart is tested as Lord General Murray questions, as we viewers do, this sudden turn of events: “Fortune drops out of the sky and onto our doorstep. Convenient, is it not? Do we trust this boy?” It definitely feels like a trap is being set. Stuart finally seizes the initiative and orders the men into battle. Anderson, fortunately, is as good as his word and, in a moody, atmospheric scene, leads Jamie, Dougal and Charles Stuart and their men through the fog to their victory at Prestonpans.

Mortality is a major theme and with death but a march away, our characters reflect on their relationships. For me, this is where “Prestonpans” gains its greatest resonance. Murtagh (Duncan Lacroix) reflects on the real scale of conflict and considers with Jamie: “We’re part of a two-thousand-strong army. My death, your death alone would be meaningless.” The intimate scenes between Angus and Rupert, as they observe the promises made between two of their comrades Kincaid and Ross in the event of their deaths, were obviously acknowledging that some of these friends will not be alive by the end of the episode. 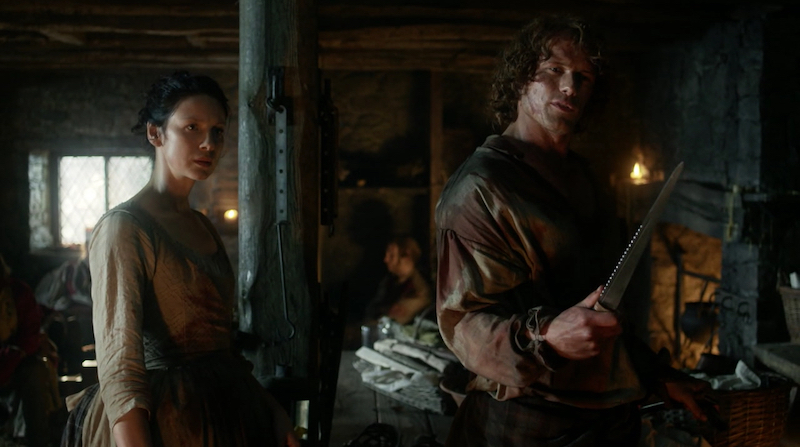 Obvious these scenes may have been but they were powerful nonetheless and to see both pairs, battered and bloody, deal with their losses in the field hospital is hard to bear. While Kincaid is spared a lingering demise, it is Angus, blown off his feet by cannon fire, who holds on to life long enough to see Rupert’s injuries dealt with before he dies in Claire’s arms. His parting kiss from Claire prior to the battle is all the more bittersweet given his horrible demise.

Through Fergus’ eyes we see the sheer brutality and noise of battle as the boy, foolishly sneaking off to join the men, experiences death firsthand on a huge scale and he emerges from it, rather as the audience does, deeply shocked by the experience. How does a young boy rationalise the fact that he has just stabbed someone to death and in the process has probably extinguished any innocence he had remaining? This is also a major consideration for those adults who survive Prestonpans too. A victory it may be but at what personal cost to men either too exhausted and injured to care or still fired with irrational bloodlust and revenge. 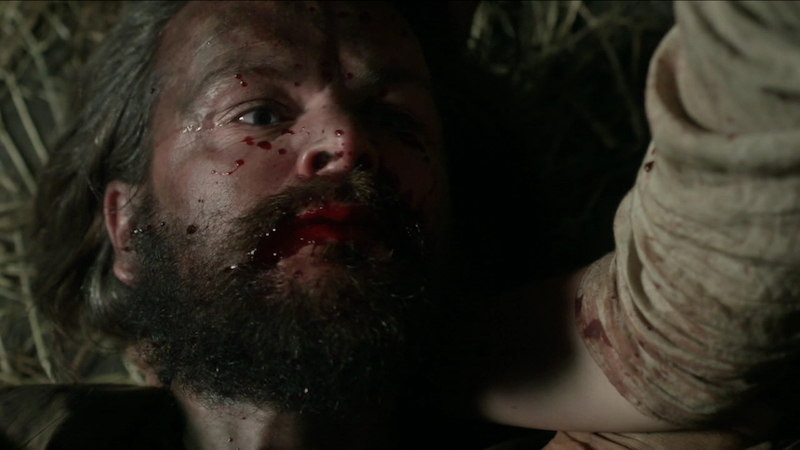 It is of course Dougal who becomes the focus of these concerns. Out on the corpse-filled battlefield he chances upon the wounded British officer Jeremy Foster (Tom Brittney), who handed Claire over to Randall at Brockton in season 1’s “The Garrison Commander”. Foster taunts Dougal with the very realistic proposition that the Jacobites will fail in their attempt to defeat the British. He gets a dirk in the guts for his trouble. Dougal also sees red when he returns to the field hospital and finds the wounded British are among those being treated. He disagrees with Charles Stuart’s insistence on respecting your enemies, a point of view already diplomatically handled by Jamie so as not to offend the ignorant man’s own troops, and demands bloody retribution.

His bloodlust horrifies Stuart and he is dismissed from the army. Fortunately, arch manipulator that he is, Jamie manages to persuade the Prince that Dougal is invaluable to the cause and it would be better to promote him so as not to face his disobedience in person again. Dougal acknowledges how clever Jamie has been: “I know what you did. You championed me and exiled me both at the same time. That’s a plan worthy of my brother, Colum.”

This well-judged, very intense episode shows that the real cost of such battles is to plunge Murtagh, Jamie and Claire “down among the dead men” where the flavor of victory has a very bitter taste indeed. They will be drinking the same toast again soon because, as Claire acknowledges, although she correctly predicted the outcome of Prestonpans, it means she is still “right about the disaster that awaits us at Culloden.”