I’m still not sure about Preacher. I love the comic books, but this TV series lacks its sense of mischief and spark of lunacy. There are clearly honourable intentions at work, but the changes to make the concept suit the demands of weekly TV seem to work against what was so entertaining about the bristling insanity of the comics. All adaptations are compromises of vision, especially for something with Preacher’s graphic content, but on a basic level of storytelling I’m concerned…

Why are Jesse (Dominic Cooper) and Cassidy (Joe Gilgun) “best mates” exactly? We know they have to be, but the TV show’s done nothing to make us see what Jesse gets out of their relationship beyond a bit of company. And in this adaptation Jesse has church helper Emily (Lucy Griffiths) to provide that. Cassidy’s right to appreciate the daytime sanctuary of Annville’s church with vampire hunters chasing him around the world, and he was impressed by Jesse’s bar fighting skills, but other than that? Why are we supposed to buy into them as a deep friendship? Ditto Jesse and Tulip (Ruth Negga), although we’re now being drip-fed details of their shared criminal past. But it just seems like unnecessary wheel-spinning; one of many ways to try and make this story last ten episodes, cooped up in the same town, when the source material would’ve taken us to France by now (uh, spoilers?). 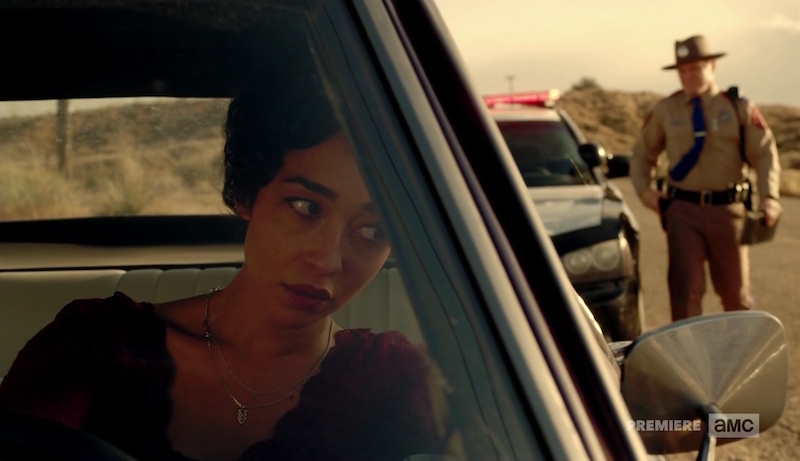 Okay, you’re boring the shit out of me right now.—Tulip

“The Possibilities” continued Preacher’s tendency to throw random scenes at its audience, hoping some will lodge in the memory for pay-off later. Last week came the introduction of the Saint of Killers in a flashback to the late-19th century, which was an exciting prospect for fans of the comic. To newcomers? It was a random cold open to an unnamed character who’s been unmentioned since. This week? A similarly early glimpse of someone in a white suit and hat watching a movie at a cinema, who’s clearly another prominent and popular Preacher villain. I won’t spoiler who.

Am I excited about this? Yeah, in a sense. I like that the show clearly has an eye on bringing these crazy villains into the live-action realm, but it must make zero sense to newcomers watching—and this show will only be a success if audiences other than Preacher freaks make it appointment viewing. Odin Quincannon (Jackie Earle Haley) is another example of the randomness the show’s scripts have, as the only scene the town’s abattoir owner appeared featured him sat at his desk listening to audio recordings of cattle being slaughtered. It’s creepy of him, sure… but that’s all. 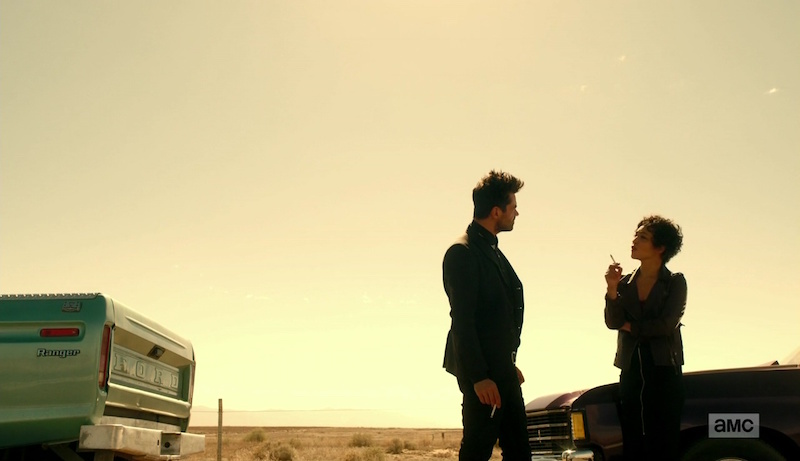 At least there was some forward momentum in this third episode. Jesse revealed to Cassidy that he can impose his will on others, even vampires. Cassidy managed to talk to the resurrected Fiore (Tom Brooke) and DeBlanc (Anatol Yusef) and agrees with them that the ‘entity’ inside Jesse needs to be given back. I also feel relatively safe referring to them as angels now, thankfully. And it became clearer that Tulip wants revenge on the getaway driver who bailed on her and Jesse after a bank robbery ended with an innocent man being shot in the head. 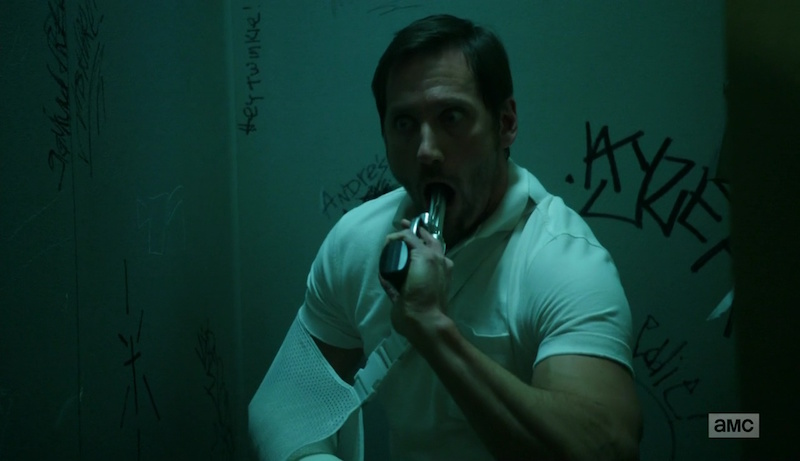 It feels like there’s a big blender in my gut.—Jesse

The repercussions of Jesse’s new gift and recent behaviour also began to make itself felt on the population of Annville. The paedophile school bus driver has forgotten the school girl he was attracted to, to the bemusement of the girl and her friends. Donnie (Derek Wilson) feels emasculated around his teenage son, now he’s being ridiculed by school kids, after getting his arm broken by “the preacher” and yelping out in pain. So much so that Donnie attempts to even the score in a gas station toilet towards the end of the hour, but doesn’t count on Jesse also being able to order him into almost committing suicide. The comatose girl Jesse commanded to open her eyes has also started to arouse a feeling that the town’s preacher was somehow responsible (a miracle worker), and there was an intriguing suggestion that ‘Arseface’ (Ian Colletti) was responsible for putting the girl in a coma to begin with.

One thing I unequivocally like about the series is Ruth Negga’s performance. How unexpected that the worst of the three key Preacher characters is already the best on this show! It’s fair to assume the writers feel they have more freedom with Tulip O’Hare, who needed improving, whereas everyone else feels like ‘sacred ground’ in a sense. Tulip may be annoyingly enigmatic purely because the script demands it, but Negga makes this sassy crook feel like the only person who’s a real human being. She’s quirky and fun, yet also manipulative and dangerous. I loved the scene where Tulip sweet-talked her way out of trouble with a traffic cop who caught her speeding. Negga’s also nailing the Texan accent (well, to my Limey ear) and owns the screen whenever the camera’s on her. I just worry that Tulip already feels like a canary cooped up in a cage, and keeping her tied to Annville just because Jesse thinks he has a mission from God there could be a problem for her character. She’s not the stay-at-home type in this TV show, and certainly wasn’t in the comics.