It’s been interesting to consider other opinions of Star Trek: Discovery, now we’re deeper enough into the first season to make some valid judgement calls. Some reasonably question some of the creative decisions being made, while others seem to hate that it’s not Star Trek: The Next Generation 2.0. I can’t defend everything it’s doing, either. Nothing’s perfect, and there have been some questionable choices. The profanity in “Know Your Pain” didn’t shock me, but it’s sad to know some parents will take the f-word as good alone to steer their kids away from it. Still, there’s enough bravery in what Discovery’s doing that I prefer it over something safer and more in-keeping with its predecessors.

“Lethe” was an interesting hour, written by Ted Sullivan and Joe Menosky, the latter of whom wrote numerous scripts for The Next Generation, Star Trek: Deep Space Nine, and Star Trek: Voyager. It makes sense for some of the “old guard” to come over to Discovery, as it takes a particular skill-set to write a good Trek story. Menosky delivered an episode I could imagine happening in the previous shows, but perhaps not quite to this standard, or in this style.

The story began with Ambassador Sarek (James Frain) travelling to broker peace between two Klingon houses, only to realise his Vulcan shipmate is a so-called “logic extremist” and suicide bomber. Following the explosion, Sarek is left unconscious in the crippled vessel, adrift inside a large nebula, and Burnham (Sonequa Martin-Green) is alerted to her adopted father’s predicament because they’re linked by his katra. Remember the premiere? 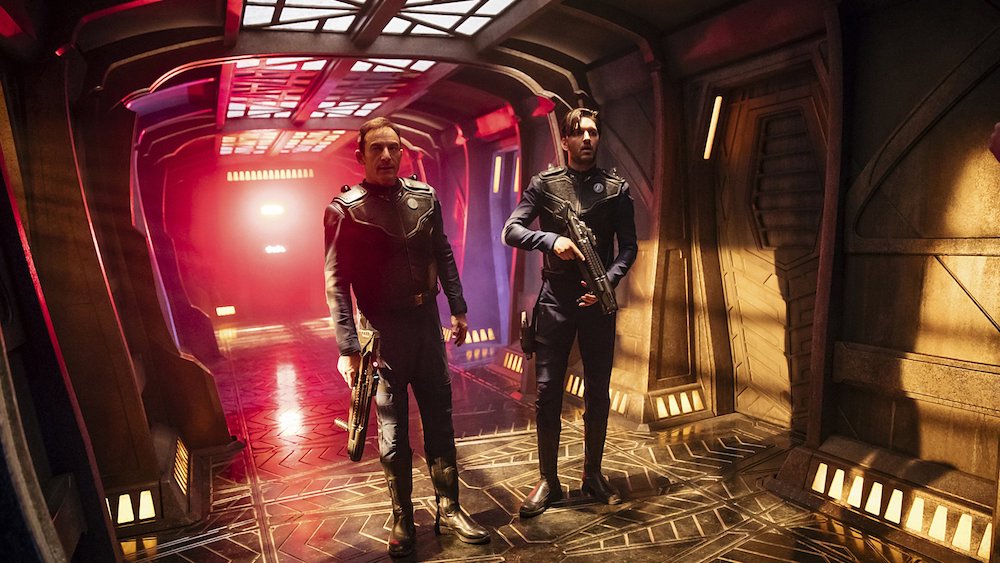 Firstly, it was fascinating to note there’s a faction within Vulcan society that, much like the Klingons, don’t like the Federation! That muddies the waters very nicely, although I’m sure others won’t be happy that Gene Roddenberry’s utopian vision has been given a shot of realism.

I wonder if the logic extremists (the LE’s?) are helping the Klingon Empire in their war efforts? There’s been a tradition in Star Trek to have entire alien species representative of certain cultures or personality traits (the Vulcans are all intelligent, the Klingons are warmongers, the Ferengi are greedy, the Cardassians are fascists, the Bajorans are spiritual, etc.), but Discovery’s trying to make things more complex. Earth has many cultures within it, so why doesn’t the same apply to alien planets like Vulcan? And if Klingons are right-wing nationalists, the “logic extremists” aren’t too far away with a similar attitude about racial purity.

This episode didn’t explore the L.Es, however much they piqued your interest. It instead became a rescue mission, which has been scheduled rather bit poorly in the season considering a rescue formed the basis of “Choose Your Pain” last week. What made this one different is how it wasn’t just a logistical problem in terms of piloting a shuttlecraft into a dangerous nebula, because there was also some emotional exploration simultaneously.

Burnham found she could enter a memory Sarek is having in his final hours, and becoming curious about why it was the day the Vulcan Expeditionary Group rejected her application to join. Of all the things to reflect on in your final moments, why would Sarek’s mind wander there? The explanation was satisfying, as Burnham came to discover Sarek felt great shame over the fact he could have enrolled her, but was instead forced to choose between his children… and went with his half-Vulcan son Spock instead. Funny to note that Burnham’s essentially a “human Spock” who didn’t get the breaks in life. 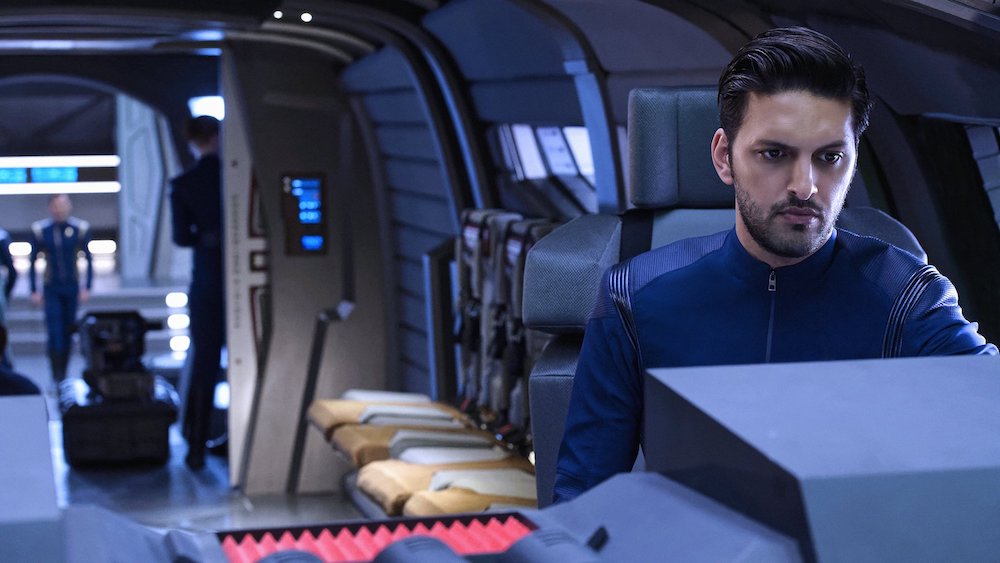 The story dug deeper into the odd relationship Sarek and Burnham have as “father and daughter”, underlining how Sarek’s an unconventional Vulcan whose life has been spent trying to prove that humans can co-exist in Vulcan society. It makes sense of the character, who married a human called Amanda (Mia Kirshner), and there’s a growing sense that we’ll ultimately come to realise why Sarek and Spock never mentioned Burnham during the previous shows, set in Discovery’s own future.

Away from the Sarek/Burnham storyline, I also enjoyed the B-plot between Lorca (Jason Isaacs) and Admiral Cornwall (Jayne Brook). It was revealed they were once in a relationship and have remained close. Cornwall’s essentially an old flame, concerned about Lorca’s state of mind following his capture and torture at the hands of the Klingons.

We’ve already seen evidence that Lorca’s unconventional in his approach (an echo of Sarek, meaning both the key men in Burnham’s life don’ t play by the rules), and that he feels indispensable as captain of Starfleet’s most advanced ship with an attitude suited to warfare. To some extent he’s able to wrap his ex-girlfriend Cornwall around his little finger, especially once they sleep together (something I’d never imagine happening on previous Trek series), but Cornwall eventually realises Lorca’s suffering from PTSD when he instinctively stuck a phaser in her face after she disturbed his sleep. 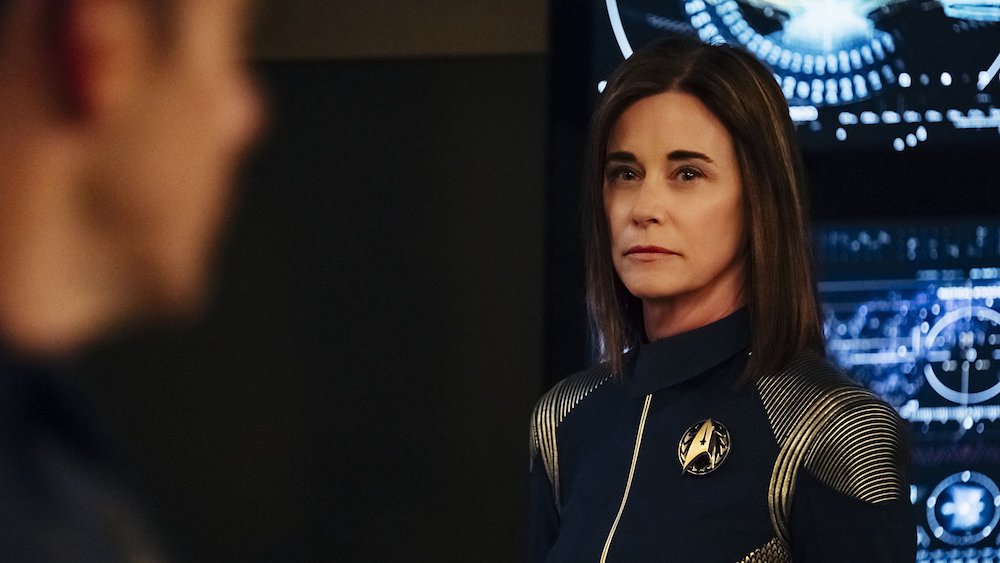 Things aren’t looking so good for Lorca when Cornwall returns to relieve him of command, but perhaps he’ll get a chance to prove he’s too useful for Starfleet to lose. Cornwall replaced the recovering Sarek, to lead the peace deal with the Klingons in the denouement, but was shocked after their envoys murdered her away team, slaughtered their hosts, and has now been taken captive. So, we’ll have our third rescue mission next week? So much for variety!

In a lot of ways, “Lethe” sums up Star Trek: Discovery so far.

It has fantastic character moments that are more believable and multi-faceted than is typical for Star Trek, despite most of that being focused on Burnham right now as “the protagonist”. I like the fact Discovery’s in no rush to put these characters into readymade roles, and just have them get along because they’re above petty grievances in this gleaming future. There’s actually some uncertainty about how the dynamics are going to work.

Ash Tyler (Shazad Latif) seems like an intriguing new addition, too. He’s a bit of a rebel like Lorca, and they already have a vague “father and son” kind of vibe when playing in the ship’s Holodeck. (Yes, this TNG technology now exists in the pre-Kirk age, deal with it. My theory? It’s cutting-edge tech the USS Discovery got first, but was never rolled out fleet-wide.) Anyway, Tyler’s someone Lorca clearly trusts and is one of the only crewmen to understand what war with the Klingons is like first-hand. The rest of Lorca’s crew are scientists coopted into fighting an intergalactic war, remember. 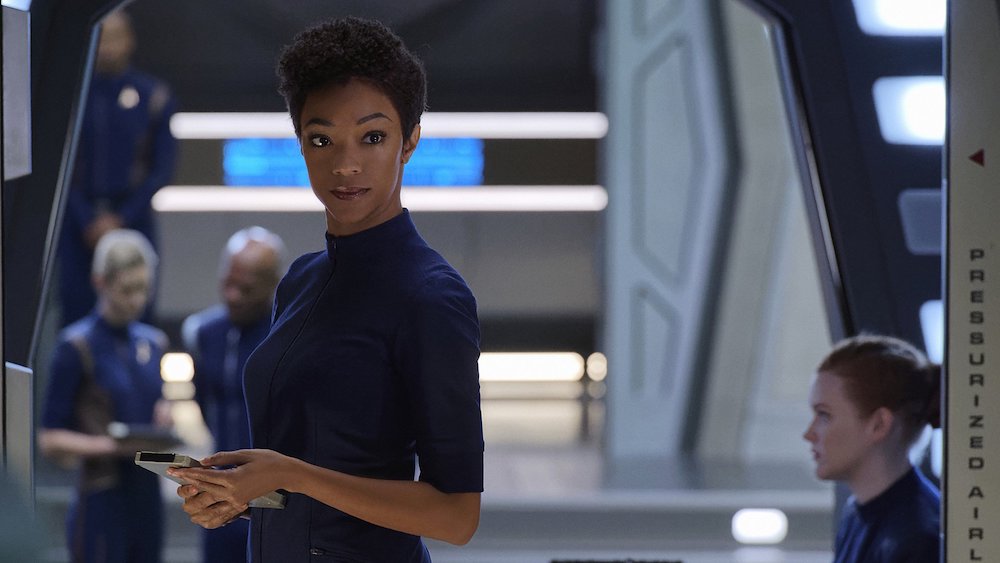 So in terms of individual characters and how they’re slowly being brought together interpersonally, I think the show is doing a good job. It’s going about things very differently, but that’s not a bad thing. Previous Star Trek’s would either have them all be best friends from the start, or setup some initial wariness but ultimately forget about all that. Who can forget Voyager with its half-Starfleet, half-Maquis crew… who largely forgot about their differences after the pilot episode. Everyone in Discovery feels like they’re complex personalities, not broad “types” the show will get around to developing.

I just hope the series doesn’t forget the strengths of Star Trek in telling weekly, self-contained sci-fi stories. I find the war background quite fun, but because we ultimately know how it’s going to work out, it’s not of huge interest. The consequences and outcome of this war is predetermined. It would be great to see these characters tackle something alien and mystifying, in the grand tradition of the show, but with only two episodes left for this first batch… I don’t know if we’re going to get that anytime soon.

Maybe in season 2, which CBS has thankfully commissioned this week?