Will they love David Harbour when he’s dead? David Harbour might, or his son that is… things are going to get as confusing as the title. In November 2018, Netflix released the documentary They’ll Love Me When I’m Dead; a loving insight into what went wrong in the last 15 years of Orson Welles’ life trying to make one film. On the thoroughly researched journey, their extensive interviewees all posed their own questions about the real Orson, each perspective offering a different figure.

This is how he would’ve wanted it, of course. Welles’ own stylised documentary F is For Fake (1973) is a deconstruction of filmmaking. He highlights how behind the illusion there’s still magic in the work. A year later, Netflix would release another film carefully constructed as a documentary that both honours Welles and pokes fun at him: Frankenstein’s Monster’s Monster, Frankenstein. A short film that parodies the auteur’s extravagance and revels in his art of misdirection. 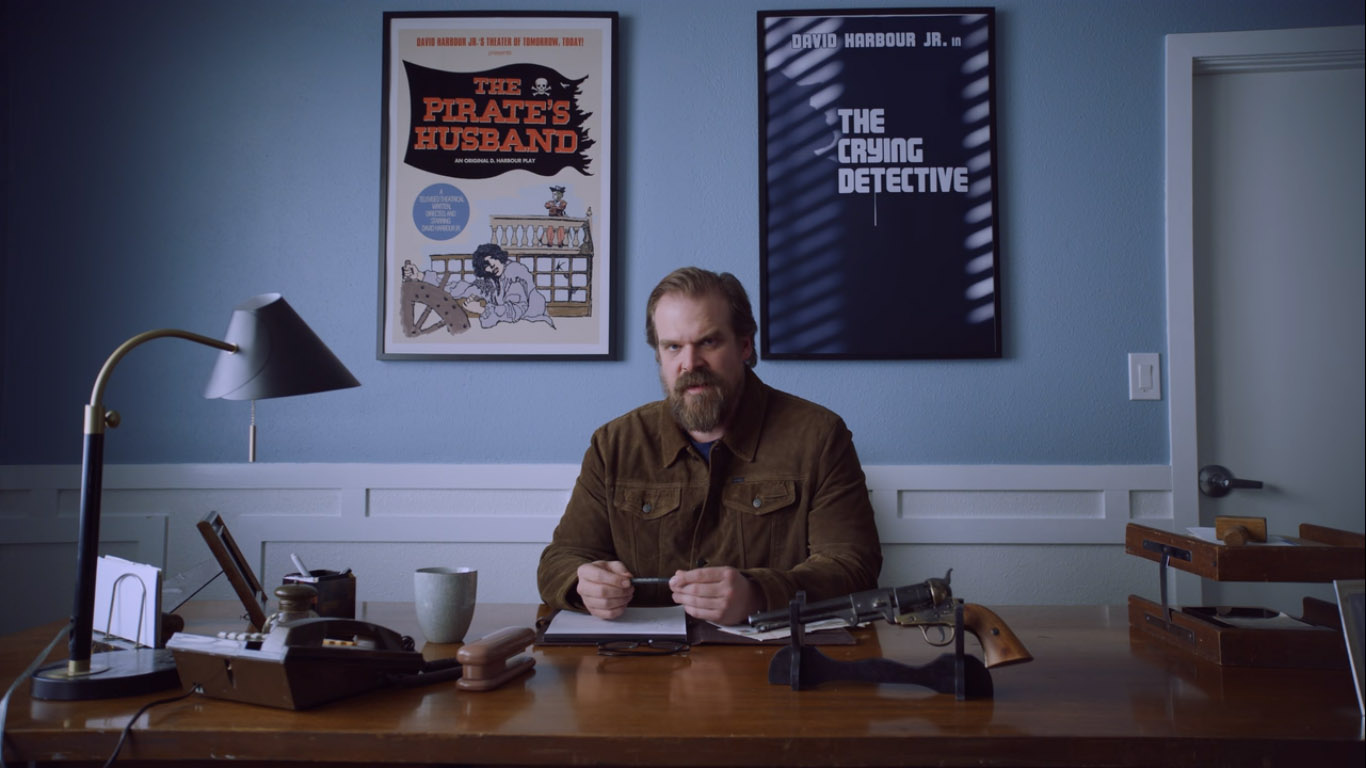 The story is as tongue-twisting as the title promises. David Harbour (Stranger Things) plays himself, or rather David Harbour III. In his documentary, he’s exploring the acting heritage of all the David Harbours before him. Unearthing footage of the filmed stage play ‘Frankenstein’s Monster’s Monster, Frankenstein‘, he unravels a Russian nesting doll of comedic contradictions. A surrogate for not only Welles but many famed auteurs (Woody Allen, Quentin Tarantino, etc.) inserting themselves into their work, his fictional father Harbour Jr. battles egos, acting, and creative authority.

This is just the premise. The tone of this half-hour special is ridiculous. While the Gothic horror pastiche is the focus, the pace never lulls between a range of references and homages. The wraparound for contrast plays quite dryly, the ‘real’ Harbour showing sincerity in wanting to be closer to his father. Harbour Jr. is more Garth Marenghi than Welles, being pompous and delusional in his abilities. Showcasing that an overbearing persona may be more a trick than a sign of talent. 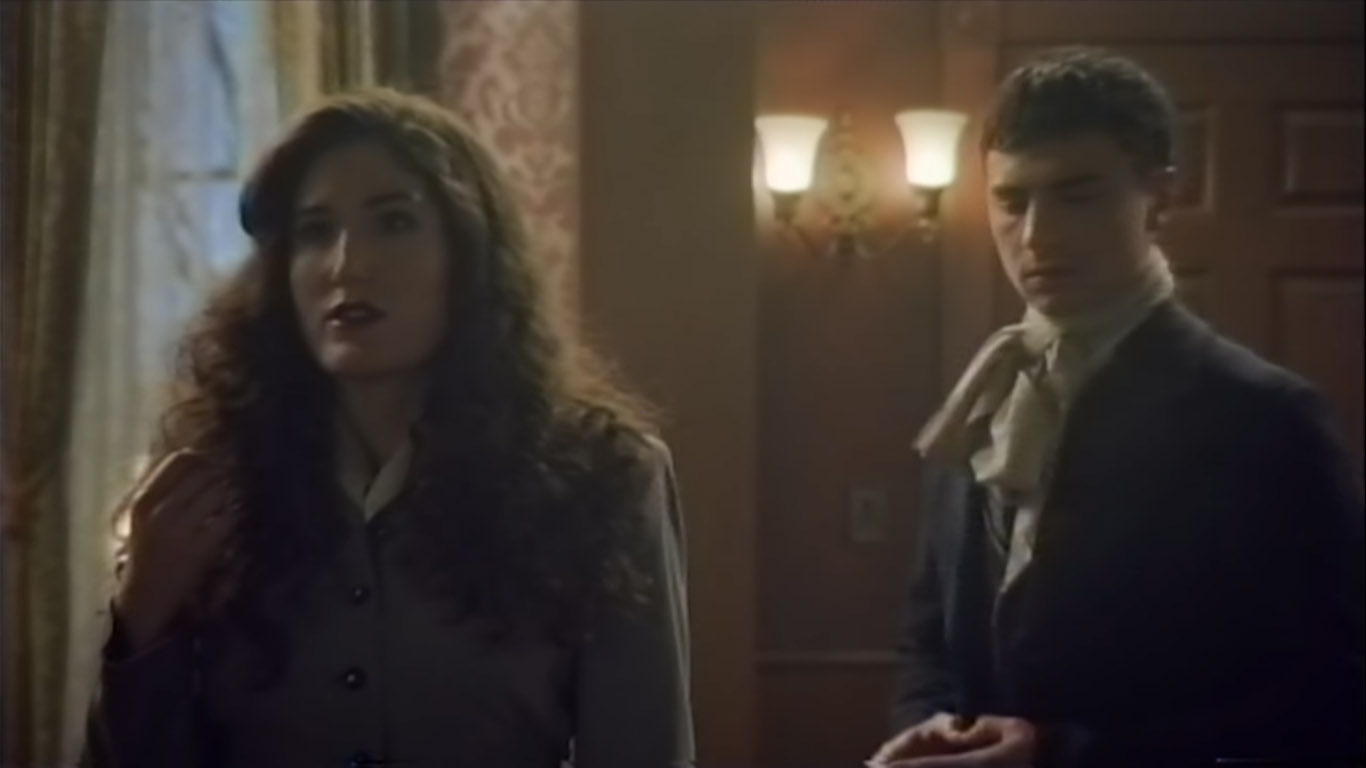 Mary Shelley also used densely structured storytelling but their unique rendition adds far more confusion. Young scientist Miss MachBeth (Kate Berlant) visits the doctor to assist his work but clear objectives are soon forgotten. The Dr Frankenstein she meets is actually his assistant, Sal (Alex Ozerov), while the actual doctor pretends to be his creation. A scheme that doesn’t make sense at any point. Much how the title plays on history’s misunderstanding of the two roles, this film pushes it to the extreme. As Sal brushes it off as a “common mistake”, MachBeth retorts “for you?” It’s never clear whether actors or characters are getting confused.

Wordplay is by far the biggest source of laughs and writer John Levenstein has experience of this. His work on Kroll Show (2013-15), The Life and Times of Tim (2008-12), and Arrested Development, built up entire characters with misunderstandings. Levenstein’s craft shines brighter the further these plant and pay-off jokes go. From stilted stage dialogue of “don’t touch that… it’s a gun”, it leads to characters outright discussing Chekhov’s rule in theatre that the gun will go off. Early laughs that expertly snowball into far goofier world-building as the sponsor of the film is the Chekhov Guns and Ammo Company. 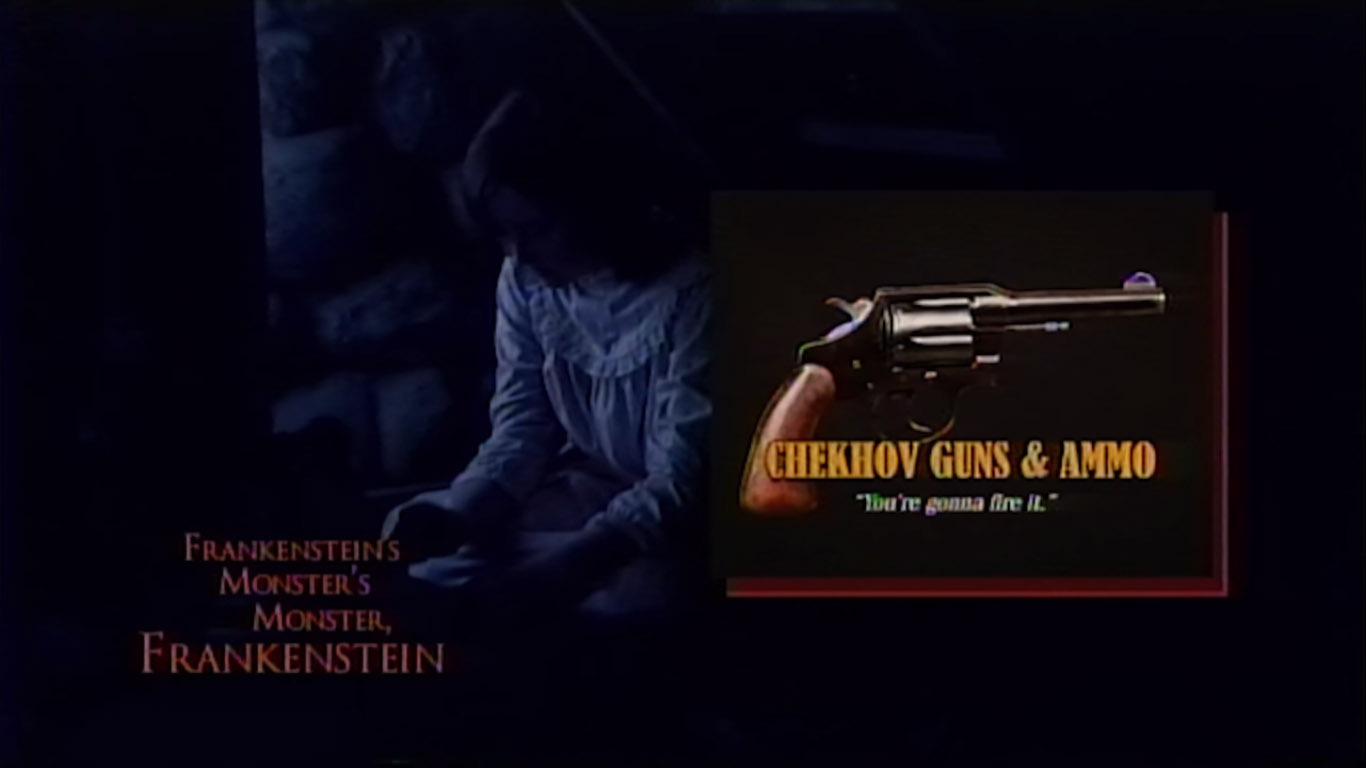 It’s a tightly written narrative masquerading as a chaotic mess. The cast does a tremendous job at delivering an Orphan Black ensemble of doppelgänger performances. Harbour provides an impressive resume for any serious Welles biopic, showing subtle shifts in character throughout the years all seen in They’ll Love Me When I’m Dead. Even understated moments as ‘himself’ show comic talent, asking if it was scripted when an actor punches through a wall and yells “that’s acting, sucker!”

Alex Ozerov has the tough job of acting opposite Harbour’s histrionics, but he compliments the story as a rival actor trying to upstage the star. If Harbour wasn’t the surprise highlight, the best comedic performance would be Kate Berlant as MachBeth. She tackles the hilarious task of being a serious female actress while shunning the advances of Frankenstein but romancing the monster. Other actors fill the roles with an array of gags; particular credit to Michael Lerner managing to make sipping chilli hilarious. 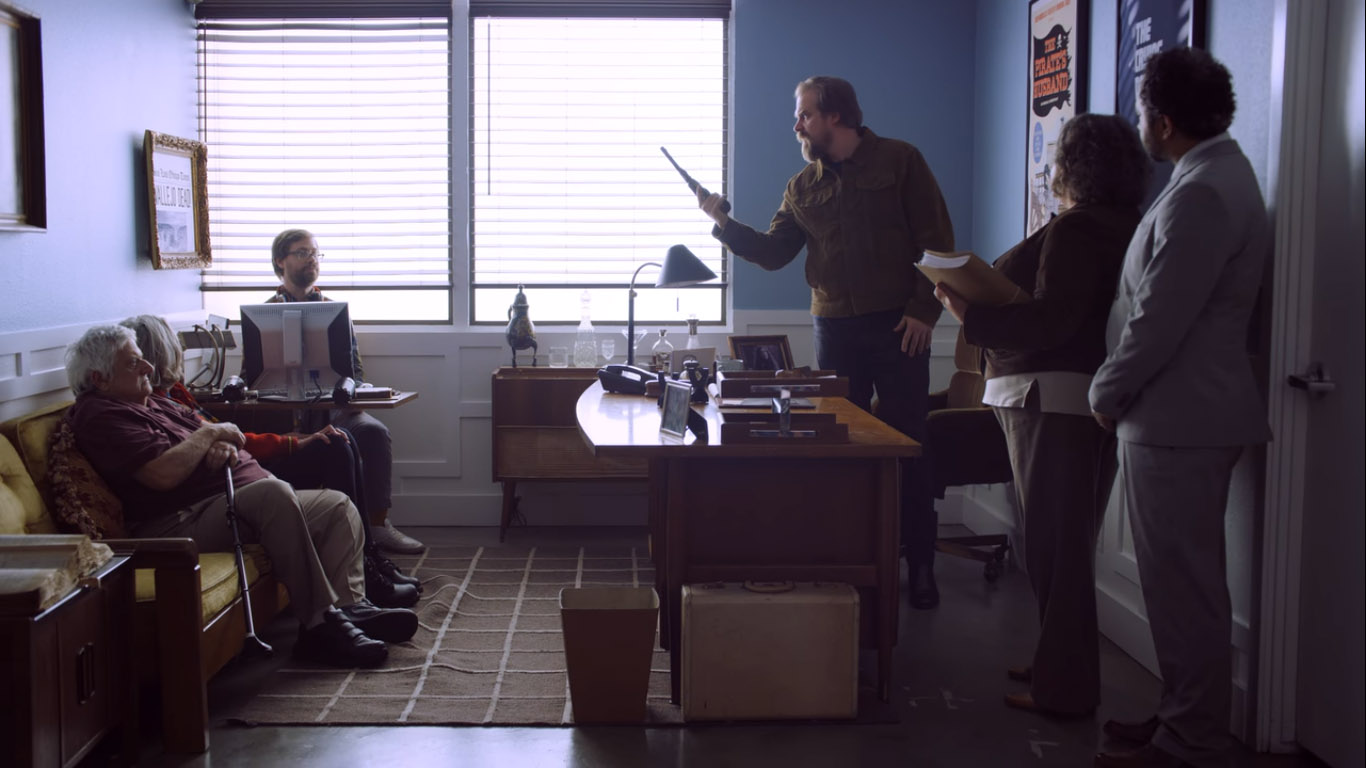 The emphasis on dialogue and performing is deserving of a great script, the direction also nails the parody element. Daniel Gray Logino has worked on Kroll Show and PEN15 and had a similar experience with twisting the documentary format on Showtime’s Who Is America? Each fictional show is lovingly crafted; from the flimsy prop doors in the film that refuse to stay closed, to the tiny group of foreground audience in the acting classes (hosted by the talented Alfred Molina). With most of the half-hour filtered through a buzzy VHS tape effect, what may be an acquired taste still draws you into this world.

Talking about the narrative is hard because much of the comedy comes from the core concept. Any developments or revelations that Harbour III discovers are some of the only spoilers the story has and explaining them do those jokes a disservice. That being said, this does have an engrossing enough narrative to pull you into a short half-hour. Compare to Netflix’s other recent short comedy The Unauthorized Bash Brothers Experience (2019). The Lonely Island were as funny as always but that seems to end as soon as it begins. The documentary here may end abruptly with dangling threads but is a satisfying whole that has room for more, which may happen. 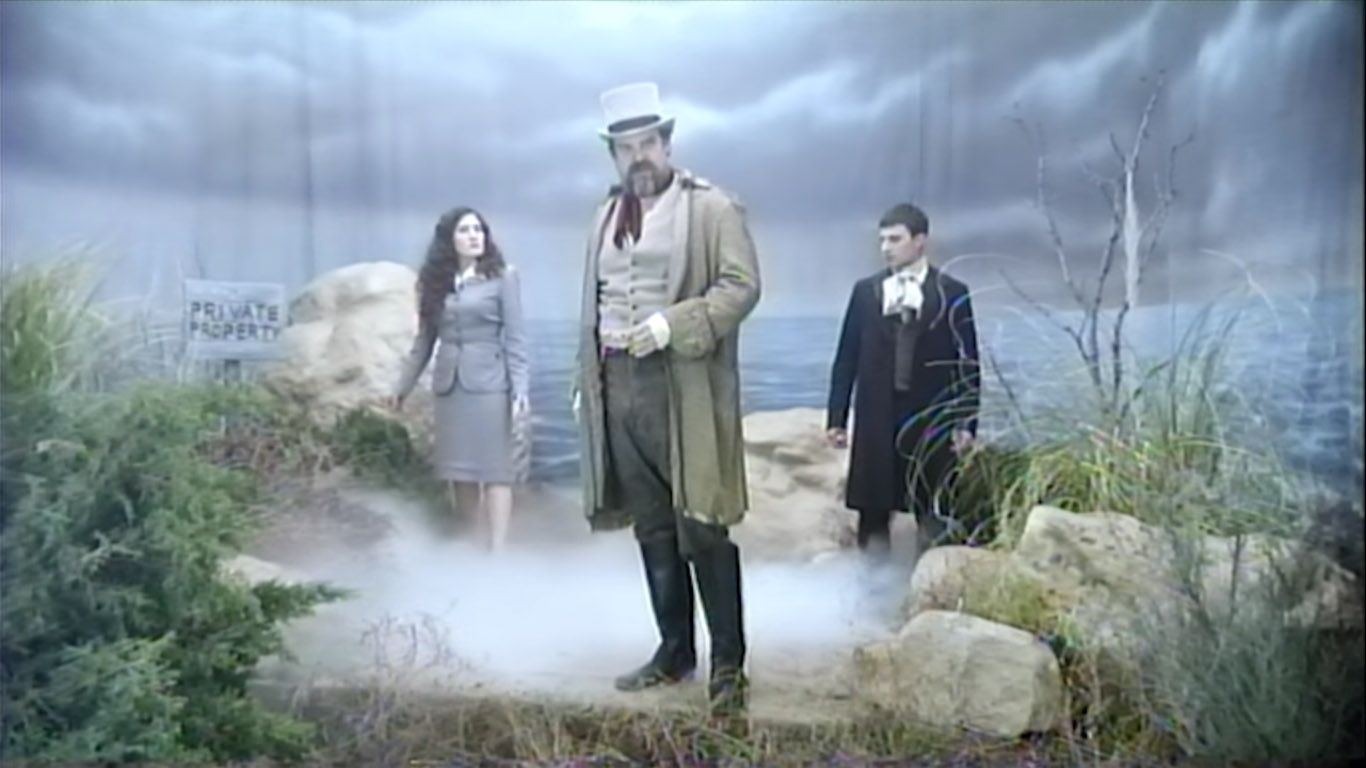 When Netflix released its first venture with these shorts, it felt like an idea that the Lonely Island couldn’t stretch into a movie. Here we have confirmation that Levenstein pitched this as an anthology, of sorts—a series of biopics that Harbour Jr. would appear throughout. Friends of the creators Nick Kroll and Natasha Lyonne have already expressed interest to join so now we wait for Netflix to pick up a full series.

Does the streaming giant genuinely want this, though? Obviously, my review is positive but with Netflix spending costs slowly eclipsing their profits they need audience retention. If someone can’t choose to spend their time with a full feature or binge a show, why not put on an entertaining half-hour to keep them invested? We may not get the further adventures of the Harbour acting family. This one of a kind oddity stands on its own as a strong and silly comedy and far more than a TV pilot.