Floris was a 1969 Dutch TV series inspired by the success of the UK’s Ivanhoe and France’s Johan en de Alverman, written by Gerard Soeteman and directed by Paul Verhoeven (Elle), that starred a young Rutger Hauer (Blade Runner). That triumvirate re-teamed in the mid-1980s to work on Verhoeven’s first English-language movie, Flesh + Blood, from a script by Soeteman and Verhoeven they wrote based on unused Floris material.

Originally titled God’s Own Butchers, Verhoeven raised $6.5M through Orion Pictures in the US, having grown disenfranchised with his own government subsidising his movies. This new trans-Atlantic partnership came at a creative cost, however, as the story was initially focused on the rivalry between mercenaries Martin (Rutger Hauer) and Hawkwood (Jack Thompson), but Orion wanted to involve a strong love interest. So the character of aristocratic virgin Agnes (Jennifer Jason Leigh) was created, meaning the story pivoted away from Hawkwood and more towards Agnes’s fiance Steven (Tom Burlinson), the son of a feudal lord who loses his lover after Martin’s men kidnap her. Steven then spends the runtime trying to rescue his strong-willed bride-to-be from the roguish Martin, who seems to develop feelings for her kidnapper. But is she a victim of Stockholm Syndrome, or faking her emotions to buy more time? 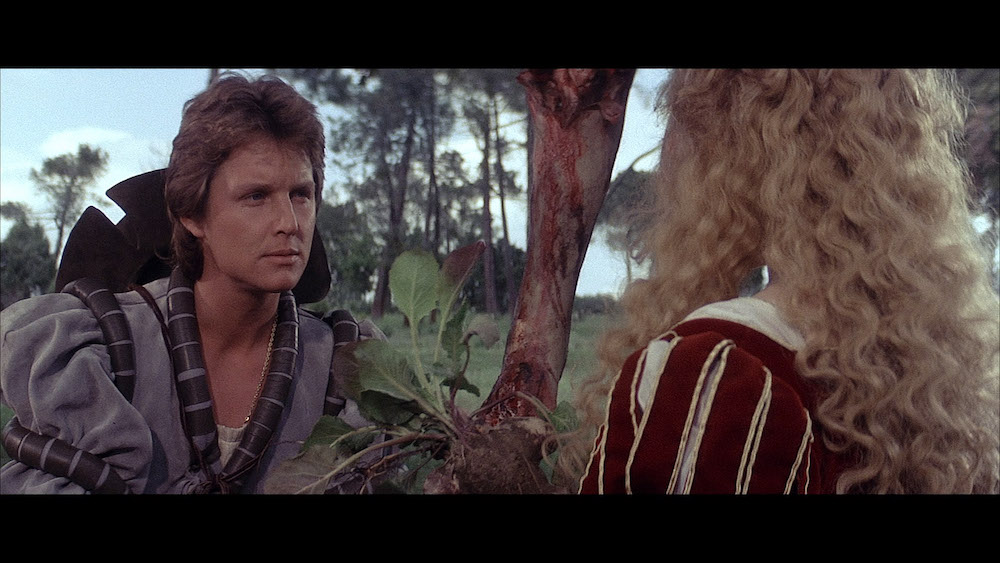 After Flesh + Blood died at the US box office (grossing a paltry $100,000 on limited release), Verhoeven voiced frustration that he bothered changing the story to mollify Orion. Although I don’t think adding a love interest was a bad move, because the weird Martin-Agnes-Steven love triangle is one of the best aspects of the movie, especially because Agnes’s real feelings aren’t clear. Jennifer Jason Leigh certainly doesn’t play the typical damsel-in-distress we’re accustomed to in historical adventures. She’s introduced as a very capable and independent woman, who nevertheless believes love can be guaranteed through magical rituals (eating a mandrake vegetable grown beneath the corpse of a hanged man).

One very controversial scene involved Agnes being gang-raped by Martin’s men, then managing to gain a psychological upper hand by pretending she’s enjoying it and making Martin look like he’s the one being sexually dominated in front of his friends. It was cut from the original release, and even today it’s a strange and shocking scene, particularly because the feel of Flesh + Blood is otherwise rather colourful and even ridiculous. It’s strange the intention of this movie was to be a realistic and brutal depiction of 1510 A.D, because that doesn’t come across in the cinematography and way things are shot. 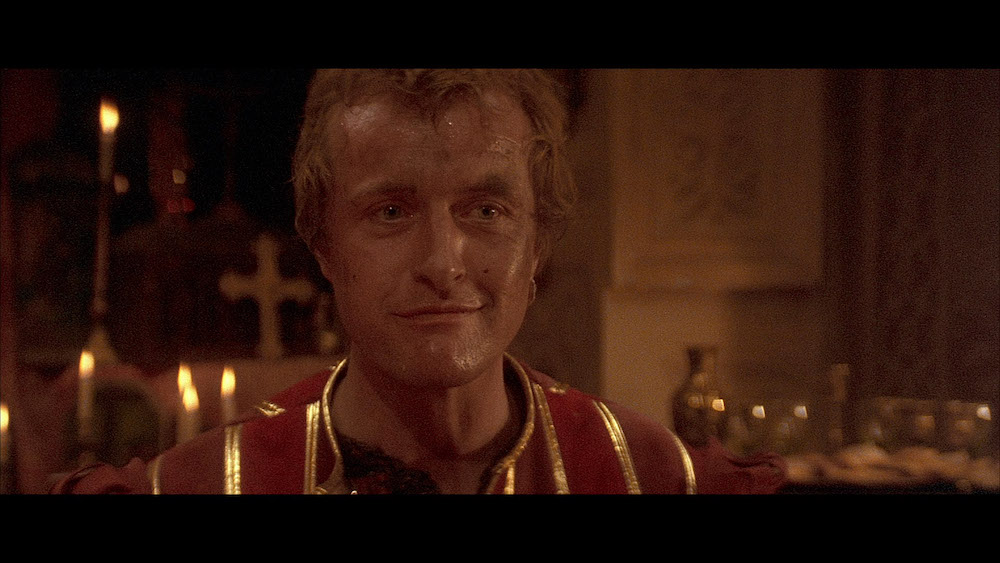 The incongruity of this movie can be startling, almost like seeing Game of Thrones’s infamous ‘Red Wedding’ suddenly appear in the middle of Monty Python and the Holy Grail (1975).

Of course, decades later, Flesh + Blood’s oddness has become a peculiar strength. There aren’t many historical adventure movies like this—that seem to be one thing, but where the material suggest a different film is struggling to break out. It’s difficult to know if Verhoeven was intentionally trying to make a medieval epic having an identity crisis, because his instincts and tastes as a Dutch filmmaker didn’t fit with what American audiences expected from a $6M Hollywood production. But at least it’s a memorable misfire. For instance, shooting in Spain (standing in for 16th-century Italy) means everything is always kept very bright and sunny, despite how the tone of the story better suits the gloomier atmosphere of England. That said, I appreciate seeing mediavel stories set in continental Europe, because it’s a nice reminder that period of history wasn’t dominated by events happening on the British Isles—although these “Italians” all speak with English accents, of course. 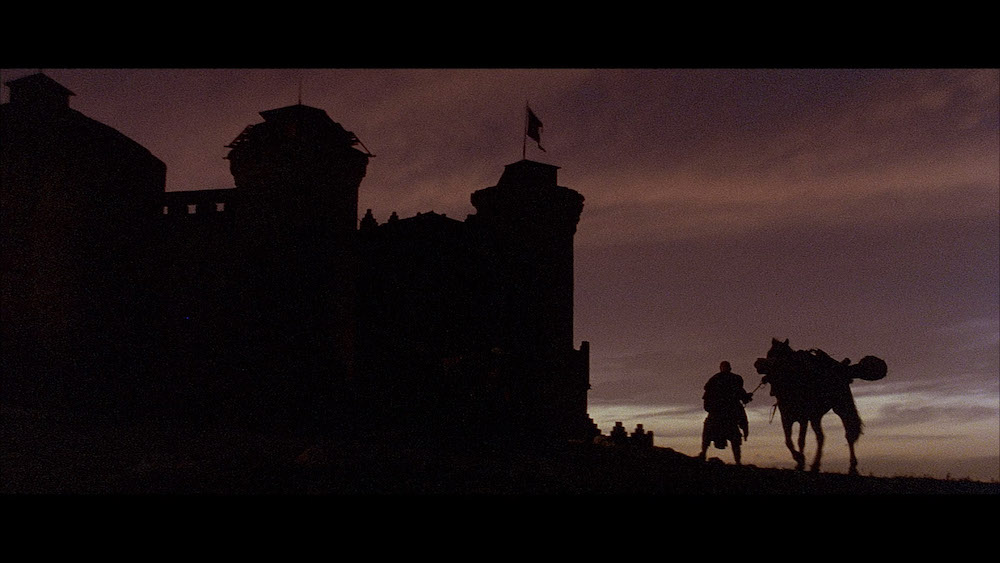 Flesh + Blood is a strange concoction, whether by design or accident, but that undoubtedly keeps you watching. The opening action sequence where a successful coup d’état is being undone at the behest of a feudal lord, who hires mercenaries to help him take back his city, in exchange for a day’s looting, has almost a carnival atmosphere to it. Indeed, there’s a tendency for most of the supporting cast to overact their parts like they’re in a musical without any songs, to sometimes aggravating effect. But this does give the story an added slither of madness that becomes rather enjoyable once you acclimate to the heightened performances surrounding the leads. Flesh + Blood is certainly a movie that, love it or hate it, grows on you as the story develops and the central characters take shape.

There’s also some strange casting oddities to note, or learn about afterwards. I was immediately struck that a ruddy faced Cardinal, who interprets omens sent by God for Martin’s men, sounded exactly like the Bishop of Bath & Wells from Blackadder II, and—lo and behold!—it was indeed actor Ronald Lacey playing the part, whom one might also recognise as Gestapo agent Toht from Raiders of the Lost Ark (1980). There are also roles for character actor Brion James (Hauer’s Blade Runner co-star), Bruno Kirby (The Godfather Part II), Nancy Cartwright (voice of Bart Simpson), and EastEnders actor Jake Wood is the little red-haired boy who becomes infected with the Plague. 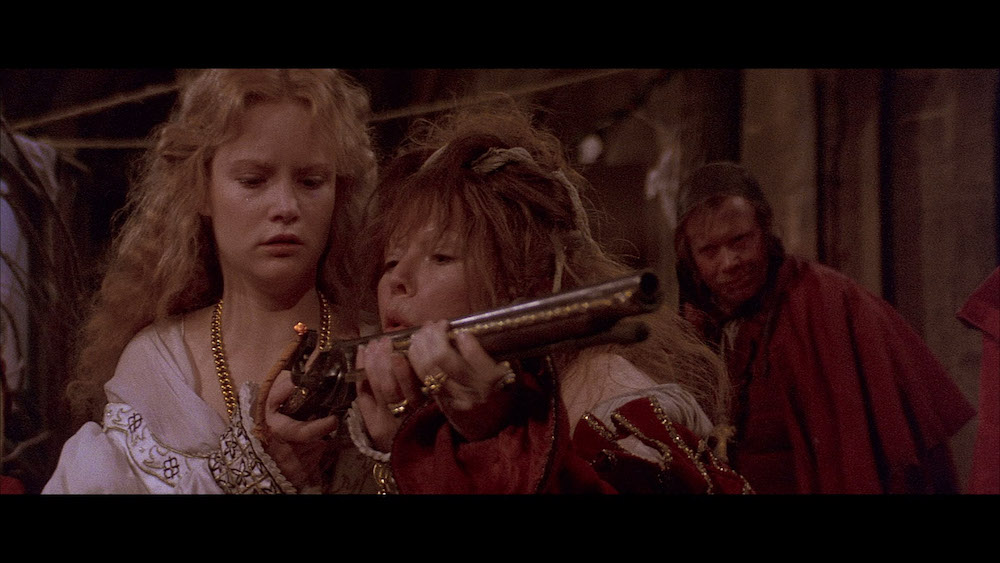 Production on Flesh + Blood didn’t go well, which is undoubtedly why the movie seems very ramshackle. Verhoeven struggled to make something that would please all of the investors, who each wanted a different kind of movie, and he made the mistake of not storyboarding anything because he wanted a loose improvisational style. The cast and crew would apparently come and go from set, often found partying at a local beach, and Rutger Hauer’s decades-long working relationship with Verhoeven soured due to their clashes over how his character should be portrayed…

Hauer wanted to move away from playing villains after Blade Runner (1982), but Verhoeven intended Martin’s morality to be difficult to pin down—which is why he’s presented first as a Robin Hood-style folk hero, becomes a twisted weirdo after kidnapping Agnes, then a clearcut villain once we become sympathetic to Agnes’s fiance Steven, and then finally back to anti-hero in terms of how his character exits the story. Again, this strange choice is another example of why the the movie did so poorly back in ’85, but today we’re perhaps more accepting or morally complex heroes and villains. Or characters who simply won’t fit into a neat box, despite what the genre’s conventions are still supposed to be. 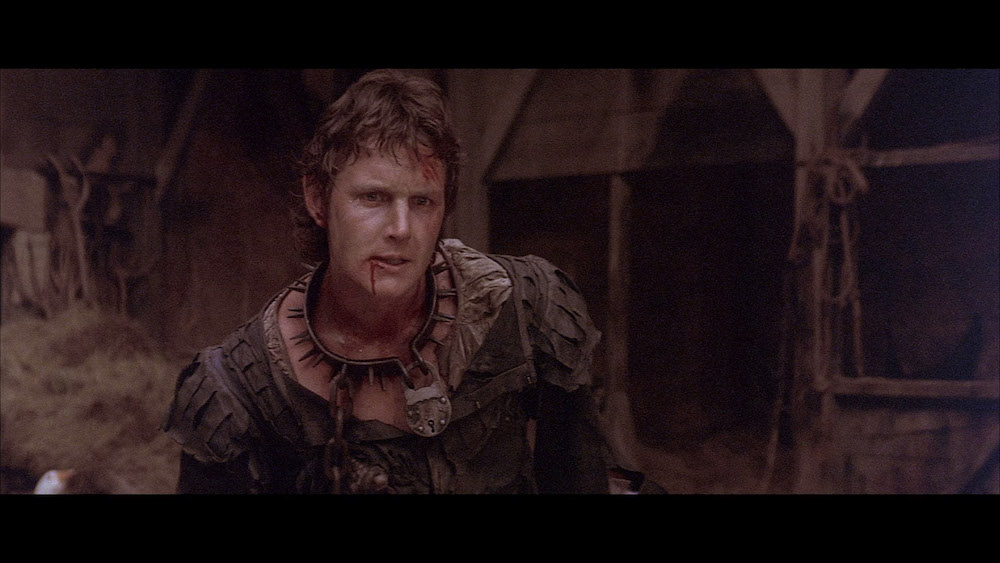 If you’re a fan of Paul Verhoeven, it’s worth watching Flesh + Blood to spot nascent signs of what made his name in Hollywood during the 1990s—most obviously his attitude to nudity on camera. But it’s not the bloodthirsty spectacle one might expects from a Verhoeven-made mediavel romp, or a particularly challenging story. It’s creatively flawed and very unsure of what it wants to be, but it’s also never boring and there are memorable scenes to counterbalance the preposterous ones (like a ridiculous anti-siege “tank” that gets built faster than King Arthur’s wooden rabbit in the aforementioned Monty Python comedy).

Verhoeven was unhappy when Flesh + Blood flopped at the US box office, so he moved to America to better understand the culture and create something that might appeal more to the marketplace. His next movie was the violent and satirical sci-fi crime thriller RoboCop (1987), and the rest is history… 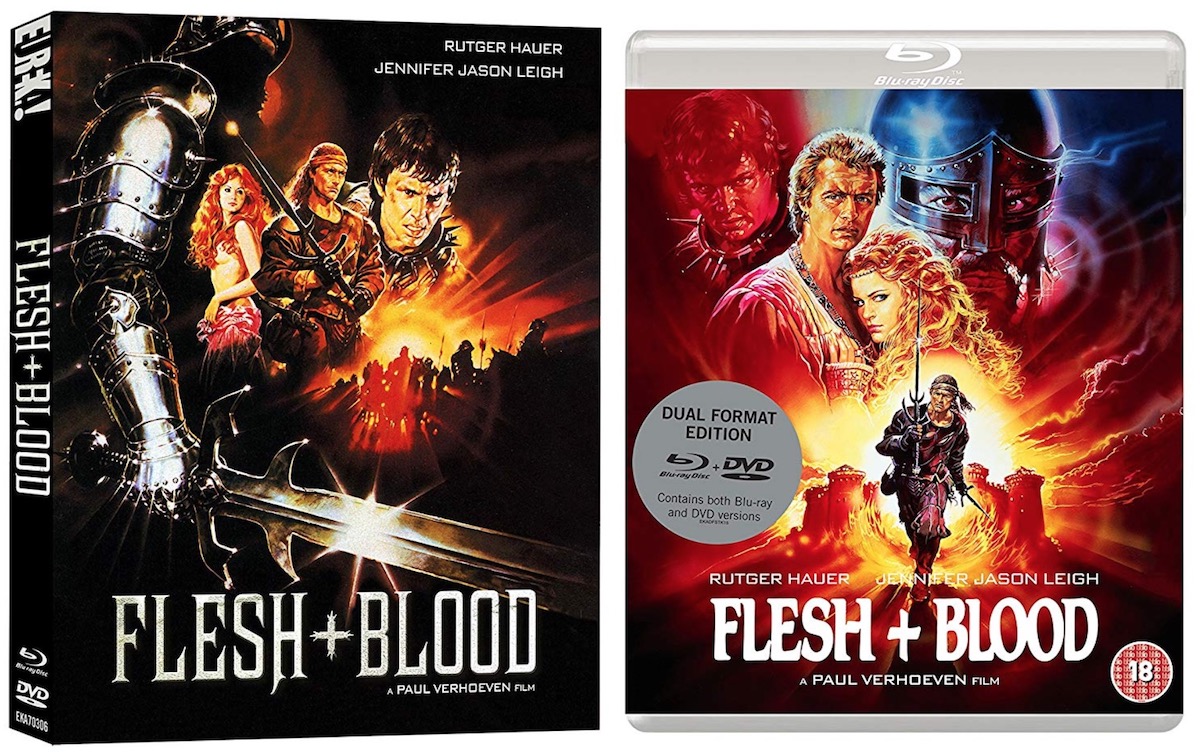 Eureka Entertainment’s new Blu-ray/DVD Dual Format release of Verhoeven’s first Hollywood picture comes with an uncompressed Linear Pulse Code Modulated Audio (LPCM) stereo soundtrack, which has a high bitrate because it’s not being compressed and decoded on the fly. I’d have preferred a DTS-HD Master Audio remix, as certain scenes would benefit from rear effects and a more immersive soundstage, but it wasn’t to be.

The 1080p 2.35:1 picture has a patina of heavy grain that becomes distracting during some scenes. The image hasn’t been remastered for this latest release, instead sourced from German label Koch Media’s shoddy 2013 transfer. It’s been noticeably sharpened, with poor colour grading throughout, and there are issues with black crush. It’s a shame Eureka didn’t invest time and money into making sure this was a definitive release. Cinematographer Jan de Bont (who later worked on Die Hard and directed Speed) must be upset this movie still hasn’t been given a chance to shine, and Verhoeven completists deserve better.