Euphoria is one of the most important teenage shows for years. Adapting an Israeli miniseries from 2012-13, few shows have caused as much of a stir as HBO’s latest drama. It’s unashamedly explicit and doesn’t care if anyone’s offended. The pilot gets straight down to business—portraying sex, drugs, and alcohol with a flippancy that birthed a thousand blogs from concerned parents. Luckily, Euphoria has the emotional depth to counterbalance the pill-popping, explicit selfies, and booze-fuelled parties.

Euphoria opens with an angsty monologue that connects millennial pain with being born in the shadow of the 9/11 terrorist attacks. It’s a little on the nose, but as it comes from our young omniscient narrator, Rue (Zendaya), it can be forgiven. The pilot shows its young characters attending an active shooter drill during high school. They’re so blasé about this fact one bored boy flashes unsolicited pornography at Rue… 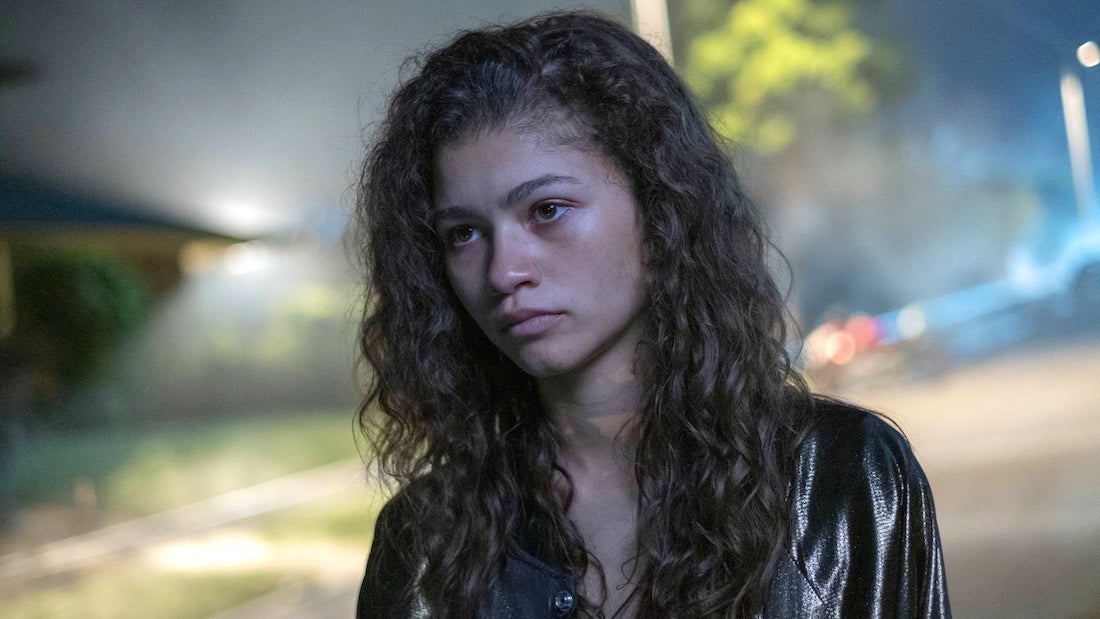 Zendaya (Spider-Man: Far From Home) is extraordinary in the lead; a young woman struggling with mental health issues which she decides to self-medicate through her own risky prescription of illegal substances. There are a few cringe-worthy lines, but one can believe they come from the philosophising mind of a precocious 16-year-old. We meet Rue after she’s spent a summer in rehab after an accidental overdose, where her first task is to get as high as she possibly can, having only been clean for a short time.

After Rue’s return to her life after rehab, she meets the new girl in town, transsexual Jules (Hunter Schafer), who spends her free time picking up curious older guys on Grindr. Through these two leads, we meet a selection of teen characters and their parents, who are all dealing with their own personal issues. 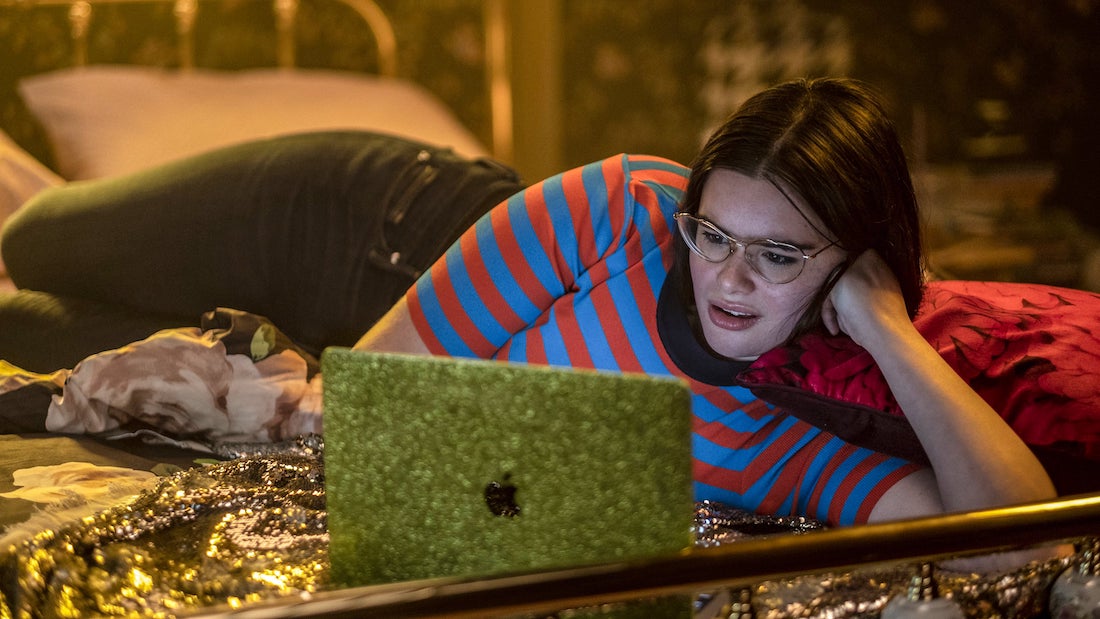 Every character’s articulate and quippy, talking in Tumblr quotes reminiscent to Diablo Cody’s Academy Award-winning screenplay for Juno (2007). Their quick wit and analytical dialogue is clearly a defence for their own traumas. Euphoria takes clichéd high school students and gives them added levels of complexity. No matter one’s background and personal experiences you’ll find someone to identify with on this show… some so accurate to real life it’s eerie. Through Rue’s monologues, we’re told about the backstory of the others—from growing up in broken homes, to be being prohibited to enter beauty pageants in fear of being sexually groomed, and even one teen whose formative years were spent writing One Direction fan-fiction.

The sex itself is nowhere near as graphic as HBO’s many other shows and revolves less around violence and rape. When characters are met with exploitative situations, the women are never demeaned, they’re empowered by their experience. When Kat (Barbie Ferreira, a dead-ringer for Ghost World’s Thora Birch) is filmed without her consent she discovers a subculture of horny men willing to pay to watch a plus-sized girl enjoy herself. When another girl is choked during foreplay, she retaliates with a far more explicit sexual request. When Jules meets older men for sex, the abuse of power is portrayed in a suitably complicated way. Euphoria also understands that not every teenager is cruising parties looking for sex, as Rue is often so preoccupied with addiction she rarely has time for straightforward a romance, although she does have time to offer a seminar on how to take a good unsolicited dick-pic that feels like it should be included as part of the sex-ed curriculum in schools. 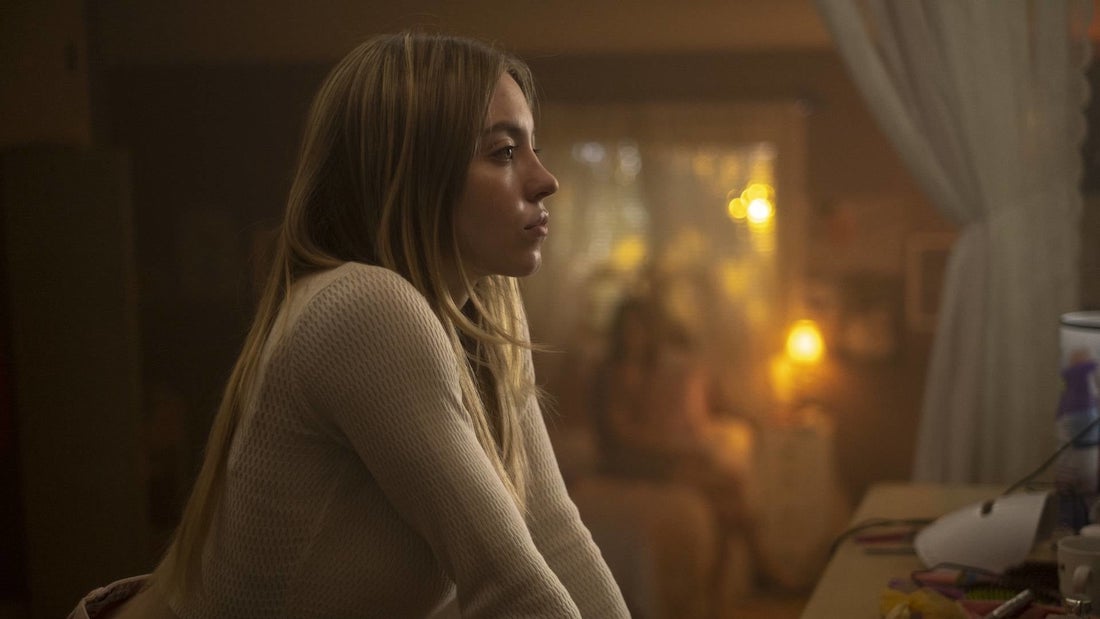 These types of YA television shows are usually limited by an inexperienced cast of actors chosen for their looks rather than their acting skills, but Euphoria benefits from an impressive cast. Jacob Elordi (The Kissing Booth) brings a terrifying malevolence to Nate, the violent jock with extreme daddy issues, and Alexa Demie looks like a 1990’s popstar but plays Maddy Perez with complexity beyond her years. 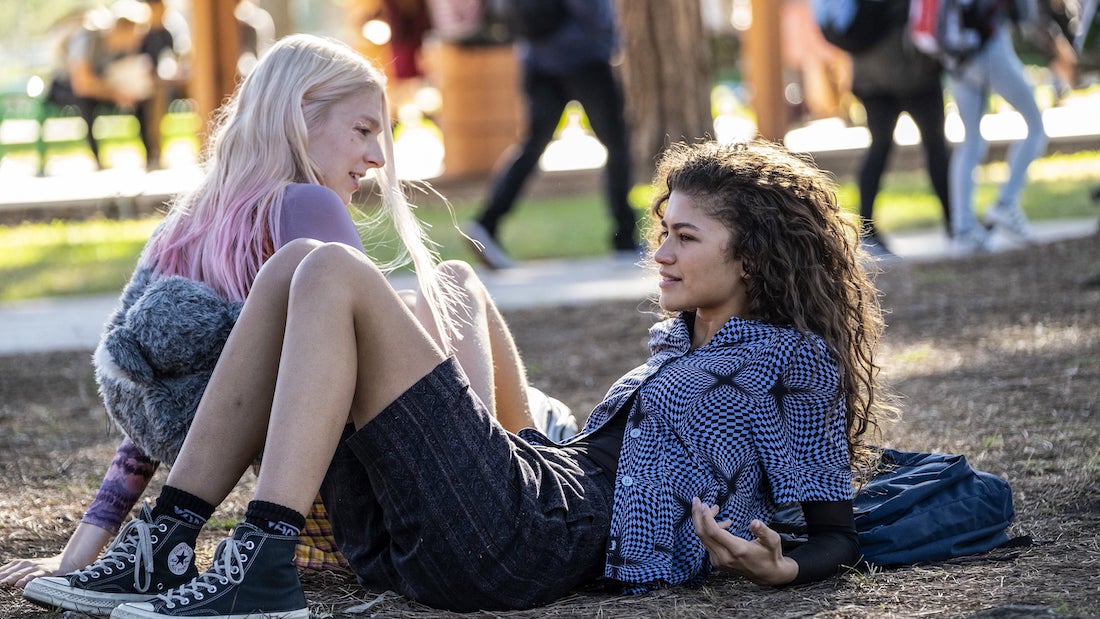 What it lacks in fairy tale storytelling it makes up for with a wonderful aesthetic. Euphoria looks fantastic and most episodes are doused in pink-hued neon with low lighting. All the women dress like they’re in a Little Mix music video and wear already iconic makeup with neon eyeshadow and diamante lashes. All the high school parties are dreamily expensive (costumed like they’re a Paper Magazine photoshoot), and the characters live in bedrooms the size of most flats.

Creator, writer, and director Sam Levinson made waves with Assassination Nation (2018), a film with Taxi Driver (1976) style ambitions. Euphoria itself has many nods to Martin Scorsese’s kinetic camera style. Levinson brings the same big-screen ambition to his work, taking us on narcotic trips alongside the protagonists. He stages multiple ambitious sequences, showing the audience these aren’t sets but real places and spaces. Euphoria packs every hour-long instalment with wall-to-wall music alternating between opera, retro pop hits (like 10cc’s “I’m Not In Love” and Bronski Beat’s “Smalltown Boy”), and modern artists like Lil Wayne. That’s perhaps no surprise because rapper Drake is an executive producer on the show. 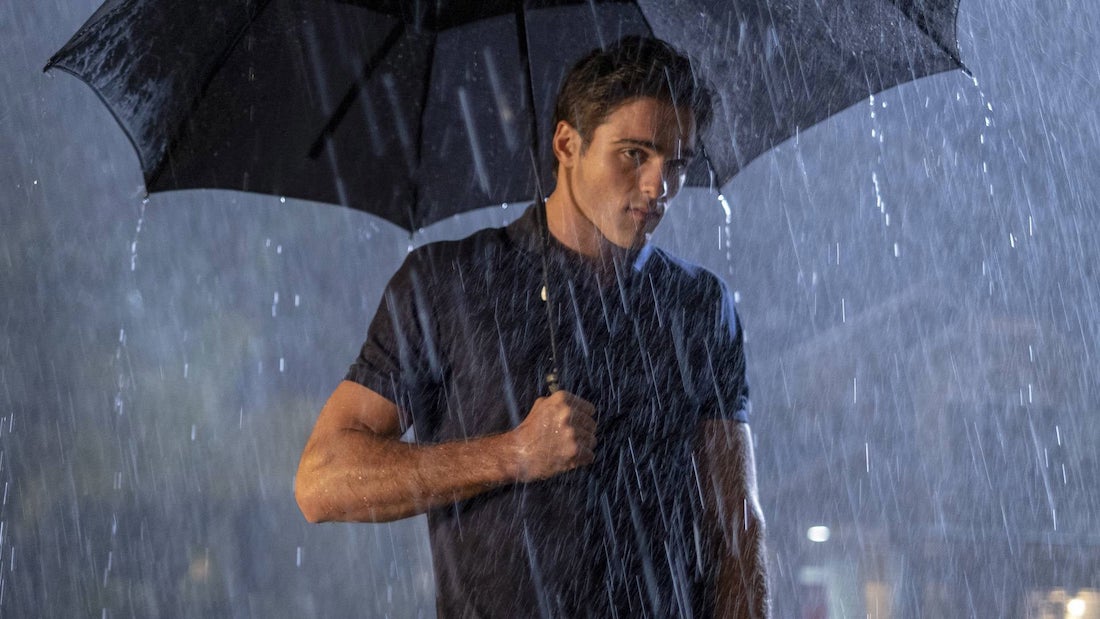 Euphoria isn’t perfect. Some characters don’t get enough screen time and feel undercooked, some episodes drag, and maybe all the character’s stories intertwine a little too well. There’s no light in the dark script, either—no moments of light relief or a second where characters break out of their shells and have some fun. It’s an unashamedly full hour of angst-ridden bleakness with glittery eyeshadow and leather hot pants. With a second season already on its way, Euphoria will have to sidestep the trap that all this refreshing openness towards sex, relationships, and drugs might stop feeling fresh next time.

Euphoria certainly won’t appeal to everyone but it’s nowhere near as brash and controversial as the media wants you to think it is. Not for one second is anyone’s life choice glamorised. In fact, many will look back with a relief that those days of teenage anxiety are over. It’s understandable why this is hellish viewing for parents, as no mother or father wants to think their daughter is being flashed micropenises or being choked during sex, but many higher schoolers will recognise these situations all too well.

ONLY MURDERS IN THE BUILDING – Season One