The Knick season two has had a reliably strong start, but “Wonderful Surprises” sees the pace drop ever so slightly, and highlights an issue that’s almost unavoidable in a series with as much ambition as this one. Namely: are we spending enough time at The Knick?

The series has always had one eye on the goings-on at the hospital, and one eye glancing out to the wider world of 1900 New York. And while it’s always fascinating to see depictions of what went on in the fancy reading rooms of the upper-classes, and it’s thrilling to see depictions of period street circuses, underground bar-fights and whore houses, the balance has perhaps tipped too far away from the hospital this year. 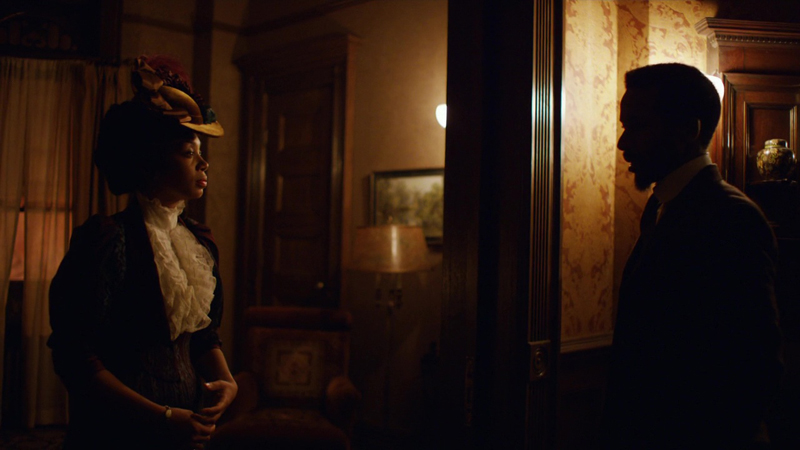 The Knick is an institution that we’ve come to know intimately, and increasingly this season it feels like we’re spending less and less time there. In fact, it’s become rather rare for characters among the hospital staff of season one to even share a scene with one another. And while it shouldn’t be the primary attraction, the incredibly vivid and grotesquely fascinating scenes of surgery and medical practise are certainly a major selling point of the series, and those too have waned in the early part of the season.

It’s no surprise, then, that most of the strongest material in “Wonderful Surprises” involves Thack (Clive Owen) and Edwards (Andre Holland) trying to cure Abby’s (Jennifer Ferrin) syphilis, using the incredibly dangerous tactic of infecting her with malaria to raise her body temperature perilously high to kill the disease, having seen it work on a test pig. (Thack explains all this while what looks suspiciously like some roast pork sits on the table in the background—a nice touch!) 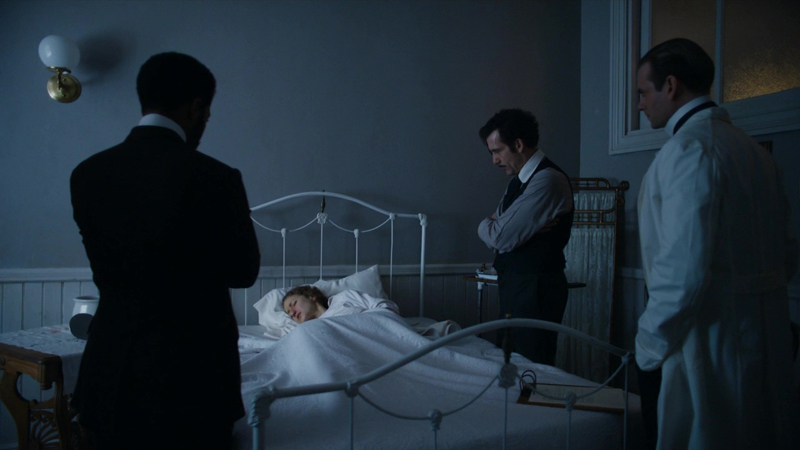 Having known Abby over the course of the first season helps hugely here, as she’s someone we’re already invested in, and Ferrin conveys such an air of sadness in the role that it’s impossible not to be rooting for her. The risky medical procedure finds Thack and Edwards standing-off against one another in a tense and highly charged moment of action—or, what passes for an action sequence in The Knick, at any rate—and it’s the sort of situation that brings both men to life. “What drugs are you taking?” demands Edwards. “None”, replies Thackery. “Bullshit—no sane person would do this!” And yet Edwards doesn’t stop him, and ultimately, he’s right not to.

Bertie (Michael Angarano), over at Mt. Sinai, may have need of that particular brand of insanity before long, as it transpires his mother has a growth in her oesophagus that’s slowly killing her, and for which there is no recognised procedure to fix it. Upon hearing the news, Dr. Zimmerman skips straight to condolences, without even entertaining the idea of finding a workable solution, while Bertie’s stern father remains as dismissive and unsupportive as ever. (Note also another example of the incredible power men hold over women in this world: his wife is dying, and yet he hasn’t even told her!) 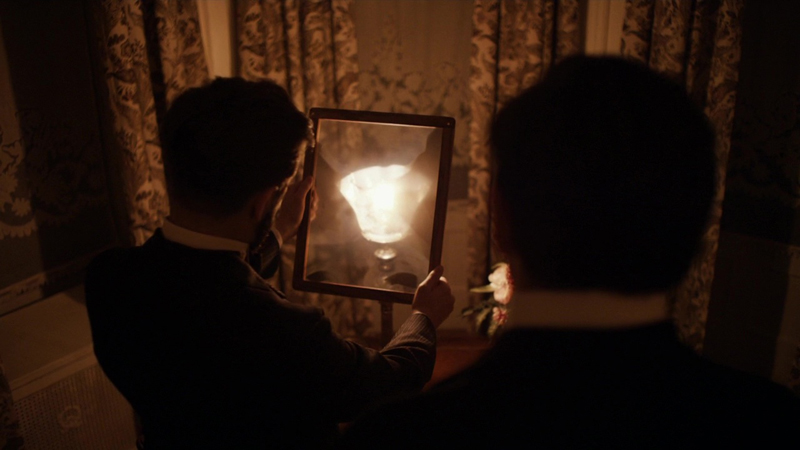 And as for the reveal at the end of last week’s episode—that Edwards has an estranged, secret wife—that strand moves in some pleasingly unexpected ways. Our first real introduction to Opal (Zaraah Abrahams) sees her telling her husband in no uncertain terms that she’s not going anywhere, as she marches through his bedroom—his sanctuary—and methodically turns on every single light, just to ensure that he sees her, and that his new situation is clear. It’s refreshing to see Edwards immediately confess all of his sins—it’s always better when characters just talk to one another—and while it seems at first as if Opal would be an ongoing thorn in his side, writers Jack Amiel and Michael Begler go a different way.

While at a dinner at the Robertson’s, Opal does indeed make Edwards’ life difficult (though not half as difficult as Cornelia’s—more on that later) by challenging the self-proclaimed progressive attitude of Captain Robertson (his face was a picture) and you may expect that marital awkwardness and antagonism to continue. 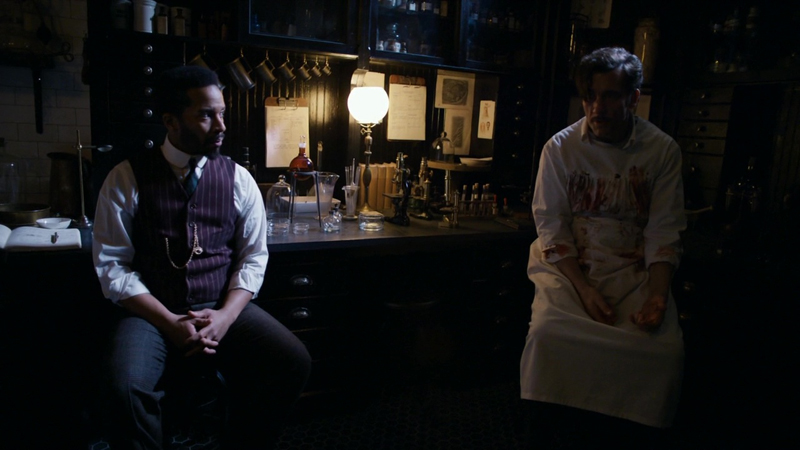 But when he later takes her to an all-blacks club in a fledgling Harlem, the pair are immediately at ease. They’re flirty, they’re smiling, and suddenly you can see why they fell in love. Edwards needs to protect the life that he’s built in the world of the white man, and surprise wives—especially progressive and outspoken ones—put everything he’s worked for at risk. But in Harlem, in their own place, he’s accepted for who he is, and there’s no need to be on guard. And thus, he and the woman he’s married to can relax and unwind amicably. A nicely played development.

Elsewhere, Cornelia has to deal with the bombshell that the man she’s in love with has a secret wife (even though she herself is already married). This is a less showy episode from Steven Soderbergh behind the camera, but the way the camera slowly zooms in on Cornelia’s face at the aforementioned Robertson’s dinner is devastating. Cornelia gets nothing she wants in this life: she can’t even pretend to be happily married, as her lecherous father-in-law seems intent on keeping her and Phillip (Tom Lipinsky) separate, in an increasingly uncomfortable sub-plot that’s been simmering for a while now, and is sure to boil over horribly before long. 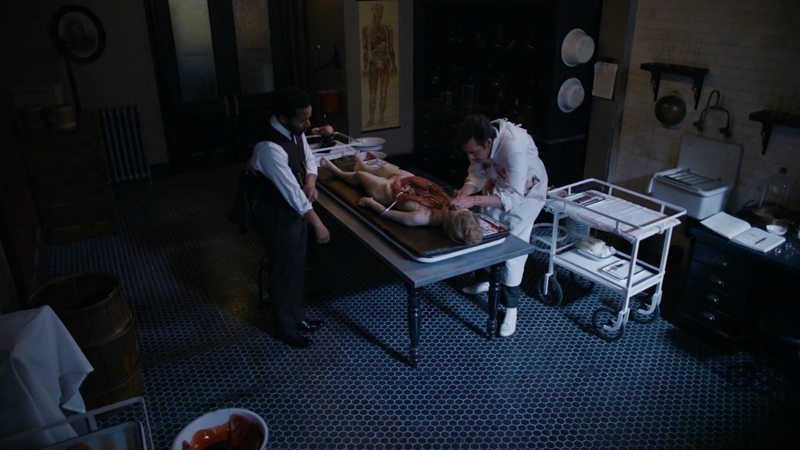 At least she gets to do some good, helping Cleary (Tom Sullivan) get Sister Harriet (Cara Seymour) out of jail, in a scene in which Sullivan is shot from numerous low angles to make him appear even more imposing than usual in the company of several dainty high-born ladies (while delivering some typically colourful turns of phrase, to boot). Cleary and Harry are always a brilliant pairing—simply because they’re so unlikely as friends—but she initially turns down his offer of a flat-share in favour of a woman’s shelter, even though they clearly don’t want the baby-killing former nun there. A shame they won’t be sharing a sitcom flat together, but at least Harry’s a free woman again.

Elsewhere, Gallinger (Eric Johnson) gets tempted by the noxious idea of mass enforcing sterilisation on anyone with dark skin, while Lucy has begun to tire of the male dominated world she suffers in, and seems on course to become a proto-suffragette. “I’m not getting what I deserve”, she bemoans to Harry, who asks: “What is it you think you deserve?” “Something better”, Lucy replies, essentially summing up the plight of every character on the show. 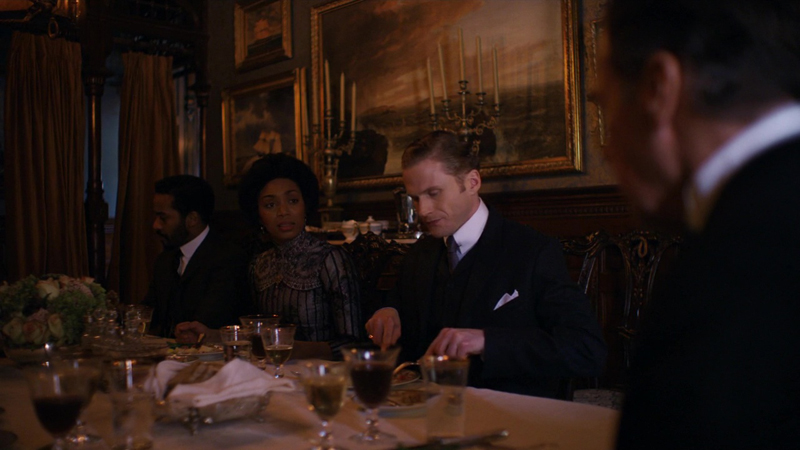 Also worth mentioning is Bertie’s first trip to a whorehouse, which is a comedy tour-de-force of awkwardness from Michael Angarano (like Barrow, Bertie is suckered into believing every manipulative lie the whore throws at him). A shout-out, too, to the hilarious cut from the whore going down on Bertie, to nurse Lucy coming up on Thack—the joke being that she’s merely checking his skin for puncture marks, after their messy break-up. A dark and slyly funny moment.

Speaking of dark and funny, how about the JAW-DROPPING moment that hapless oaf Dr. Mays (Ben Livingston) incinerates his own head? A real WTF moment in a show that often tends toward the sedate rather than the shocking. 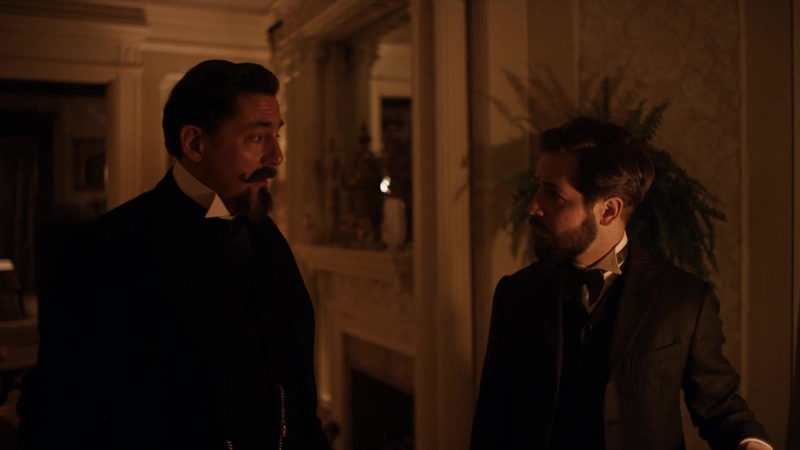 Mays was incompetent and seedy, but having been introduced only a few episodes previously, it was a huge surprise to see him killed-off so soon. It was a genuinely astonishing moment, too—delivered with perfect dark-comic timing—but it does beg the question: what was the point in introducing Mays at all? None of the other characters cared about him—Barrow doesn’t waste any time profiting off the death, while Thack and Edwards glaze over it casually—and the audience certainly didn’t. His demise was certainly memorable, but does that justify his existence? Perhaps a wider relevance to his life or death is yet to be revealed, but otherwise he does seem a curious piece of filler.

The Knick doesn’t often present happy endings, but this episode sees more smiles than most, and it ends on a particularly touching moment, as Abby awakes, cured, and Thack crawls into bed to lie next to her. It’s a tender and beautiful scene, and one in which Thack looks more at peace than perhaps we’ve ever seen him. Knowing Thack—and knowing The Knick—it won’t last long.