As many have commented, the opening scenes of this week’s Doctor Who uncomfortably mirror the suspected terrorist bombing of Russian passenger Metrojet 9268, which crashed in the Sinai peninsula. No doubt there are viewers who felt this was too close to the bone. What it demonstrates, I suppose, is how fiction and reality become so intertwined when a writer invests a story with a current political context. “The Zygon Inversion” continues the tradition, as demonstrated last week, of science-fiction and fantasy’s ability to explore the unpalatable aspects of the human condition in the 21st-century.

When Clara (Jenna Coleman) wakes in her Zygon pod, the episode recalls her first appearance in “Asylum of the Daleks”. There the ‘soufflé girl’, trapped in her crashed spaceship, was revealed to be a Dalek unable to cope with her conversion by retreating into a human fantasy. This was also blatantly referenced back at the beginning of the series in “The Witch’s Familiar” when she climbed into a Dalek. It’s another suggestion Clara’s eventual fate may be tied to her original introduction in the series.

Here, she exists in her own mirror universe; seeing her life reflected back at her, rather like the alternate Earth that the astronauts landed on in Gerry Anderson’s Journey to the Far Side of the Sun. Numbers, colours and text are reversed and Clara has conversations with the outside world through her television. It’s an effective, uncanny construction of reality that borrows from They Live, Poltergeist and The Truman Show. 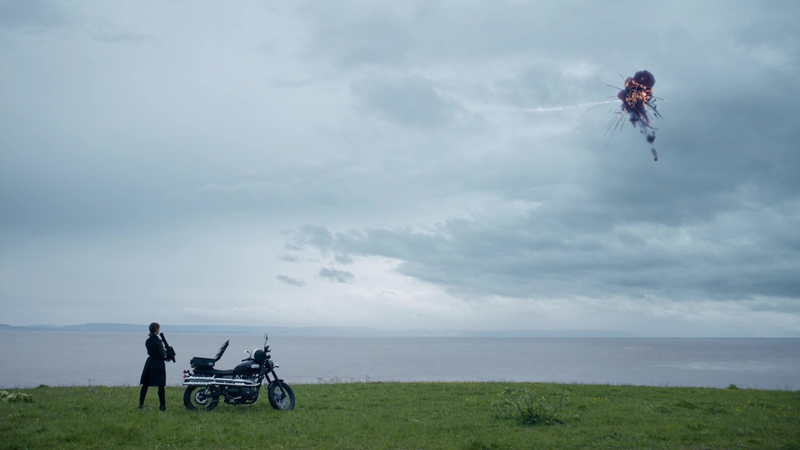 Clara is able to ascertain that her Zygon-double, Bonnie, is about to shoot down The Doctor’s plane as it approaches the English coast. The doppelgänger concept is a major motif of the uncanny and writer Peter Harness uses it here to explore Clara’s sense of self and the link to her alter-ego. Establishing their link, where each is able to influence the other, reflects another doubling that Bonnie takes on when good Clara/bad Clara is eventually replaced by the twin Osgoods; the representatives of the ‘truth or consequences’ mantra of the whole episode. It also suggests Clara is connected to the ‘hybrid’ concept the series has been obsessing about this year.

Clara’s influence over Bonnie gives The Doctor (Peter Capaldi) and Osgood (Ingrid Oliver) time to parachute to safety (cue topical reference to Bond film The Spy Who Loved Me with The Doctor’s Union Jack parachute) before the plane is destroyed. The sinister world they descend into is one where street cleaners sweep up the remnants of zapped Zygons, Zygons masquerade as police officers (shades of “Terror of the Autons”), and an innocent Zygon is publicly forced to transmute. The latter is Bonnie’s attempt to provoke the human population onto a war footing with the Zygons hiding among them.

Director Daniel Nettheim uses the coastal landscape to wonderful effect as The Doctor and Osgood consider Bonnie’s motivation and the possibility that Clara’s dead. Nettheim also develops a great chemistry between Capaldi and Oliver, and the banter between The Doctor and Osgood is effectively that between a Time Lord and a highly trusted companion. Osgood reassures The Doctor that Clara’s alive and taking back control from within her Zygon pod. 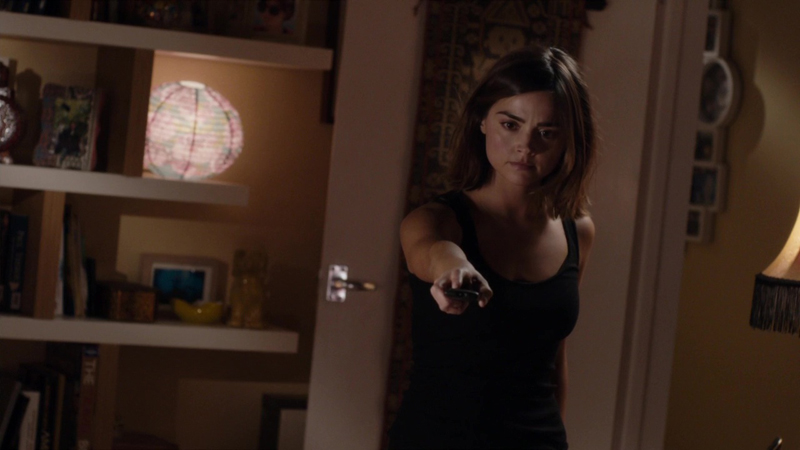 Clara causes Bonnie to wink in Morse code, giving away the location of her Zygon pod to The Doctor, and when she tries to access Clara’s memories to locate UNIT’s Black Archive she gets more than she bargained for. Much of this relies on Coleman’s performance to steer the episode, and she’s terrific as the Zygon Bonnie playing against her resourceful human counterpart Clara. It’s at this point the episode also unconventionally ditches large-scale action scenes and monsters for long conversations in small rooms.

It rapidly relies on interaction between characters trapped within their surroundings. It’s a trait that has become more noticeable during this current series and, arguably, it’s a sensible way of not spending money on spectacular set pieces. Budget may be a consideration but I’d like to think it’s also about repositioning Doctor Who as a drama not about ‘outer space’ but ‘inner space’, where personalised narratives play out in confined public and private spaces. For example, the episode’s strongest moments are when The Doctor and Osgood arrive in the deserted shopping centre, Bonnie interrogates Clara, and The Doctor gives his grand speech in the Black Archive. None of them involve prolonged battles or copious visual effects. 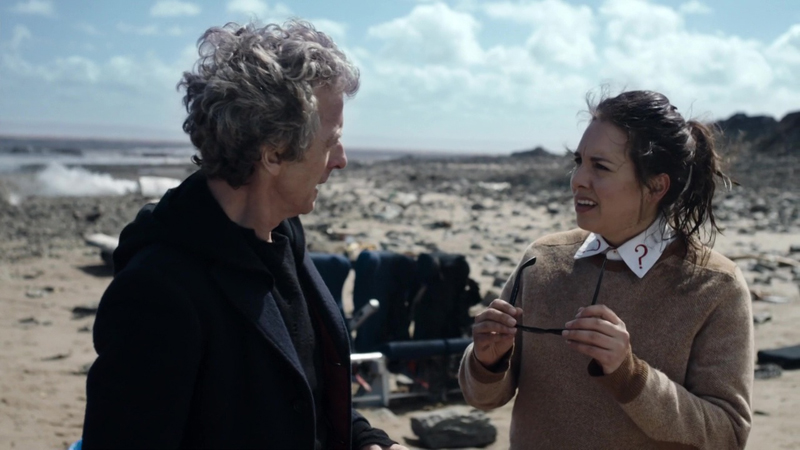 The shopping centre is the scene for a disturbing suicide when Doctor ‘Basil’ and Petronella Osgood fail to convince the Zygon who’s been ‘outed’ by Bonnie that they can help him. A monster running around a shopping centre is Doctor Who at its core. Not only does it play on body horror tropes but it also briefly articulates the ideological and cultural differences that migrants face when they arrive in an unfamiliar country.

Sadly, the cultural and political implications of this Zygon’s cry of “I’m not part of your fight. I never wanted to fight anyone. I wanted to live here” are never really explored in the key scenes at the end of the episode when The Doctor questions the benefits of such a fight. The Zygons must surely have a culture and their own ethics, philosophy, religion, art, and yet are expected to assimilate into human society and abide by its conventions.

Clara’s interrogation—a game of truth and consequences that reflects the double bluff of the Osgood boxes—is played mainly in a series of close-ups in the private spaces of Clara’s apartment-pod and the cave. This interrogation takes us to the Black Archive under the Tower of London, a familiar location last seen in ‘The Day of the Doctor”. The episode’s final scenes are again not an effects-laden extravaganza but an introspective opportunity to tie and untie the knots of the Osgood box narrative. 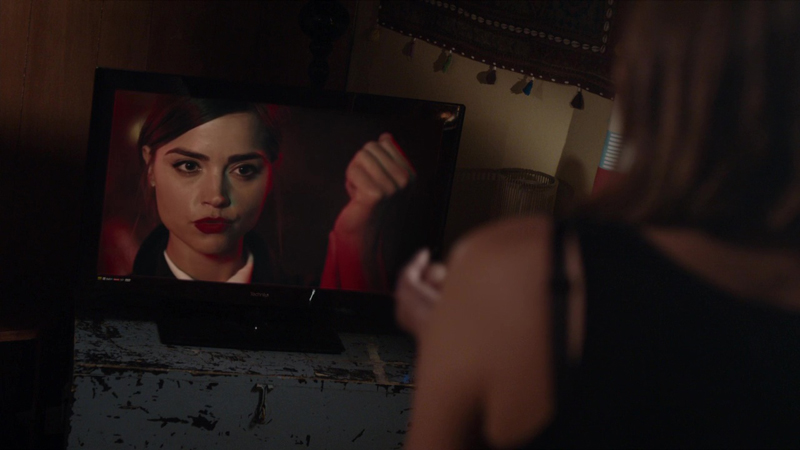 Featuring extended dialogues between two or three characters, these scenes alter the structure and pace of a typical Doctor Who episode. It may be to do with structuring narrative and character development over a two-part running time rather than a faster 45-minute narrative of a single episode. It’s debatable whether this longer structure is a good thing for Doctor Who, but clearly Harness sets out to transpose an epic war narrative for the microscope of restrained spatial and ideological reflection.

As an appendix to “The Day of the Doctor” this depicts a conflict narrowly-avoided through The Doctor’s impassioned brokering for peace. When Kate Lethbridge Stewart (who survived by following her father’s edict to unleash ‘five rounds rapid’ at monsters) and Bonnie Zygon threaten to push one of the truth or consequences buttons on each of the Osgood boxes, The Doctor shames the pair of them into forgiveness.

It’s worth mentioning Peter Capaldi at this point. He brilliantly delivers a very long speech explaining the probable outcomes to Kate and Bonnie. His Hughie Green “most sincerely” delivery will be lost on vast swathes of the audience, but the intention of showing up this war as a puerile game played by two children in a playground (if you recall, it’s where we started in “The Zygon Invasion”) is unmistakable. 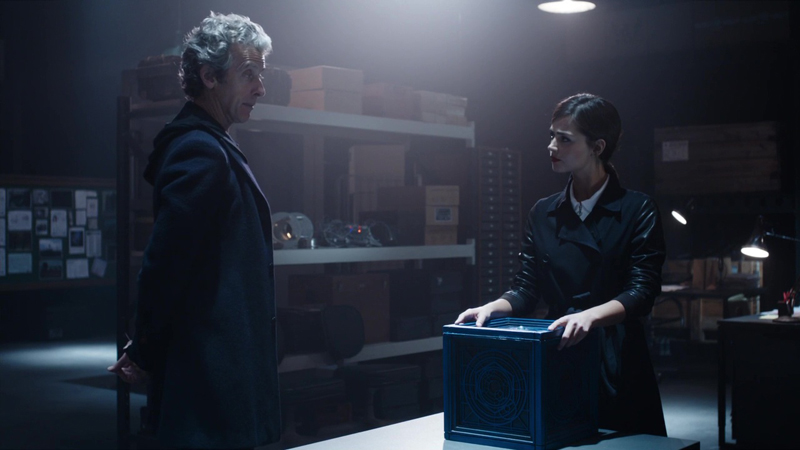 The cycle of cruelty begetting cruelty involves taking their pick of destruction by gas (courtesy of Harry ‘imbecile’ Sullivan), by nuclear warhead under the Black Archive, by unmasking every Zygon or cancelling their ability to change form. “There are safeguards beyond safeguards” that the Doctor qualifies with his experience of ending the Time War with the use of the Moment in “The Day of the Doctor”.

“What is it that you actually want?” is a question echoing around every negotiating table in the world and when Bonnie demands war the Doctor homes in on how illogical her request is. War, as he points out, has huge societal and cultural consequences for the Zygon race. Capaldi’s speech resonates because he delivers it with such passion, underlining the fact that wars never deliver “because like every other tantruming child in history, Bonnie, you don’t actually know what you want.”

It’s an electrifying scene that culminates in his devastating accusation to both parties that this is no longer a game and, in the inevitability of history, one revolution is swapped for another and, figuratively, “the wheel just keeps turning.” He knows the legacy of war is to “hear more screams than anyone could ever be able to count.” This is the pain of The Doctor’s survivor’s guilt, felt from when he met Rose one night in Hendrik’s department store and until Clara Oswald got inside his head ten years later. 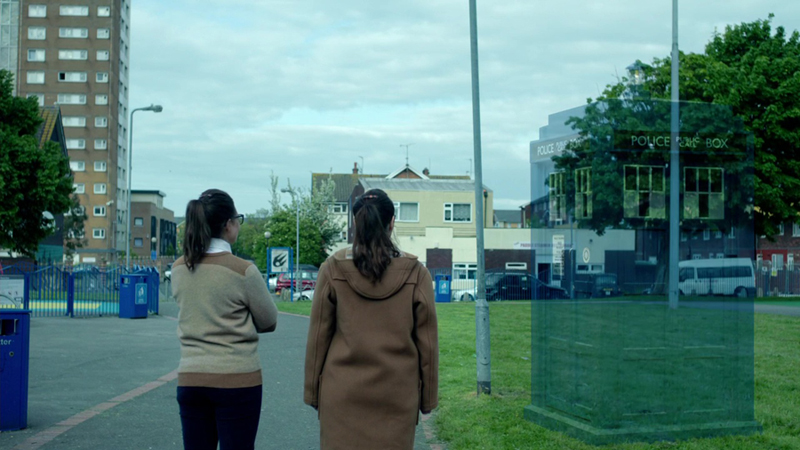 Oratory aside, the irony is that the boxes are an empty bluff; a dead switch The Doctor has provided on at least fifteen previous occasions, and one he is perhaps destined to use again. Bonnie Zygon eventually replaces the fallen Osgood to maintain the fragile peace between Zygon and human. The Clara and Doctor friendship is deepened, her supposed death “the longest month of my life” according to him. It suggests her actual loss will be even more affecting when it comes.

Finally, Capaldi and Coleman are the highlights of a powerful episode that gives space to a political and philosophical debate we haven’t seen in the series for a very long time. That they rise to the occasion admirably is testament to Doctor Who‘s continuing ability to challenge its viewers.