There were a lot of revelations in the mid-season “Lens”. Personal secrets were revealed, and some of the oddness about ‘Jardenian’ culture and its people was rationalised. The Leftovers still loves teasing us with the prospect of its cornerstone mystery being explained—one day, somehow—but even if it never happens I’m enjoying the crackpot theories the show presents us with, even if they always lead to dead ends.

“Lens” opened with a scientist making his way to Jarden (which felt even more like a bizarre theme park, as he pootled around in a ‘Miracle Way Tours’ golf buggy), to ask impertinent questions on the doorstep of Erika Murphy (Regina King) and her next-door neighbour Nora (Carrie Coon). Still, while the curious outsider’s lack of social skills saw him kicked to the curb, his theory about certain people acting as ‘lenses’ certainly caught Nora’s attention. Might she have been responsible for the departures of her entire family? Was her very presence a contributing factor in causing departures, and does it continue to be so? Could she therefore have been the reason teenager Evie vanished, literally the day after she arrived in town with Kevin (Justin Theroux)? 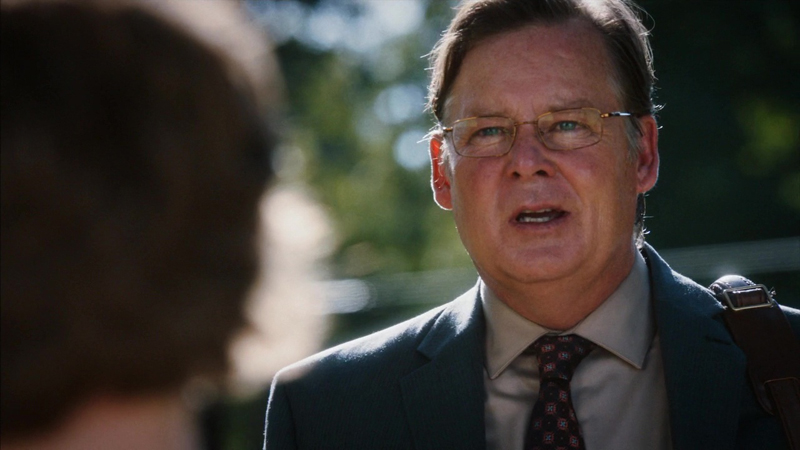 The answer is unclear. Perhaps because there will never be any way of knowing for sure. This ‘lensing’ theory has grown in popularity on the internet, but does nothing beneficial for Nora’s peace of mind—it just rekindles her feelings of guilty she’s possibly to blame for the greatest tragedy of her life. And that’s not fair. Thankfully, the scientist’s colleague Dr Herbert (Lost’s Sonya Walger) unwittingly managed to get Nora back on the straight-and-narrow by expounding on their basic theory—which rests on the notion that Nora’s been possessed by the demon Azrael. O-kay. A fun reminder that while people may present themselves as figures of authority, most are nutters who have seized on this newest paranormal field to make money from, or justify their own outlandish ideas.

However, one person involved with the Departure did earn Nora’s respect: affable George Brevity (Joel Murray), an employee of the Department of Sudden Departures (DSD) which Nora also works for. He’s newly arrived in town and keen to interview Erika and the other two mothers of the three missing girls, but not having much luck with Mrs Murphy—despite his assurances that a new government-sanctioned questionnaire will shed some light on Evie’s situation. Or at least rule out a second departure as the root cause of her daughter’s disappearance. It was great to see Murray on this show, however briefly, and it would seem he’s going to be sticking around for awhile. 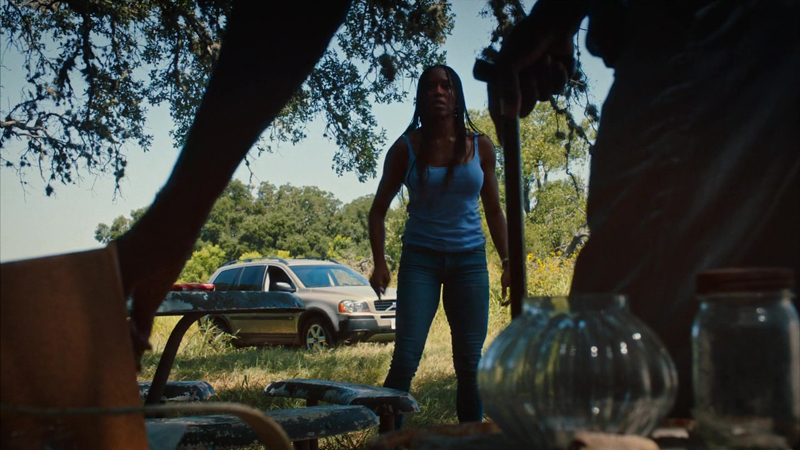 While The Leftovers may never give us a straight answer to the big question at its core, I really enjoyed how this episode dropped its veil on a few other things. We learned that the puzzling Virgil (Steven Williams) is the estranged father of John (Kevin Carroll) and something happened in their past that ended with his son shooting him, so now he lives on the outskirts of town and is trying to earn back their favour (and having moderate success now his grandson prays with him in secret).

And later, during a fundraiser for the three missing choir girls, Erika had a brilliant outburst over Jerry, the man sacrifices goat around town—where it was revealed it’s just a superstition that’s stuck because Jerry slaughtered a goat the day of the Great Departure and some folk believe their community’s good fortune was a result of it. Similarly, another Jarden citizen has taken to always wearing her wedding dress because she wore it on 21 October, and is now a local celebrity as a result. Oh, and those strange numbers that have been painted around town? They’re numbered cues for a Jarden audio tour, of course. I should have guessed that. 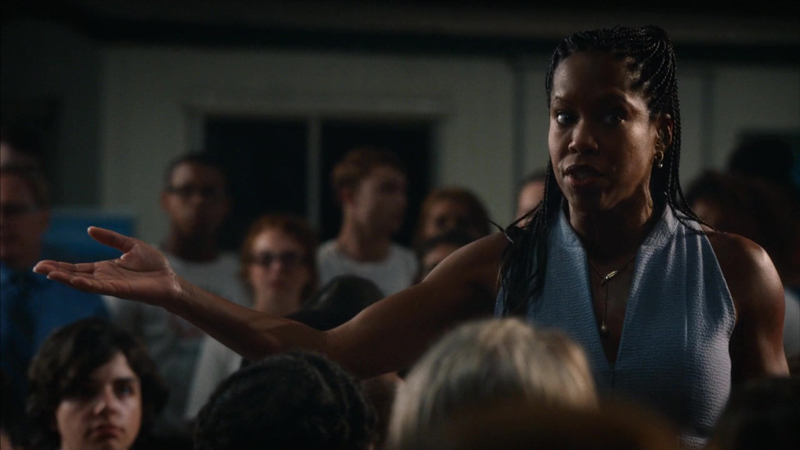 The more we learn about Jarden, Texas, the more it feels like it was just a statistical fluke to have zero departures… but that’s not satisfying enough for people to accept. Some look for logic and reason when presented with the inexplicable, but the majority just become more tolerant of mumbo-jumbo because at least it offers… something. If not the factual truth based on evidence, then a comforting story to cling to.

This is probably why Erika later revealed to Nora the reason we saw her digging up a shoebox containing a dead bird earlier. Despite the fact she publicly condemned the superstitions of those attending the fundraiser, Erika secretly believes in a myth beloved of her grandmother—that a wish may be granted if a bird, buried alive for three days, manages to survive. It’s a silly old wives tale, of course, but one that “miraculously” worked when Erika (on the eve of leaving her husband and breaking up their family) buried a bird that survived the ordeal, so hastily wished Evie would be okay without her. The next night, her precious daughter was gone. It’s a ‘be careful what you wish for?’ cautionary tale. But as Nora responded with unexpected disdain for Erika’s beliefs, it’s more than a stretch to presume those two events are in any way related—but, as this hour demonstrated, people can happily believe the craziest of things. 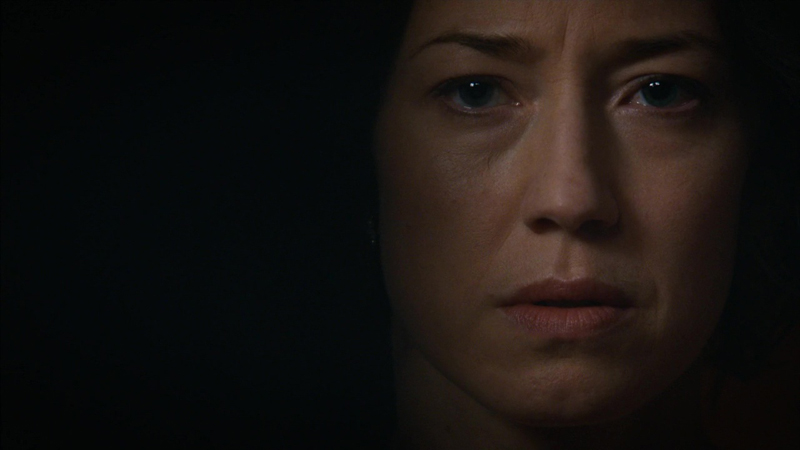 Finally, I was so pleased this episode ended how it did. After arriving home, Kevin unburdened himself to Nora about the fact he’s been “seeing someone”—but it’s not an affair with another woman, it’s the ghost of the dead Guilty Remnant leader Patti. Will Nora chalk her boyfriend’s self-delusion as a coping mechanism, or something more serious?

This season’s been fitting to different locations, focusing on particular characters each week, but that’s been a wise change to The Leftover’s format in season 2. “Lens” split its story between matriarch’s Nora and Erika—with Coon and King both doing excellent work, particularly in their tense front room Q&A, filmed in extreme close-ups—but it was an episode that benefitted Erika’s character the most because she’s been pushed into the background until now. And with both women having flung a rock through the other’s window (a neat bookend to this episode’s storyline), it seems war is about to break out between the Murphy’s and the Garvey’s. The cruel thing is: these women are both very similar, both dealing with familial loss and in relationships with damaged men, and yet they can’t it. 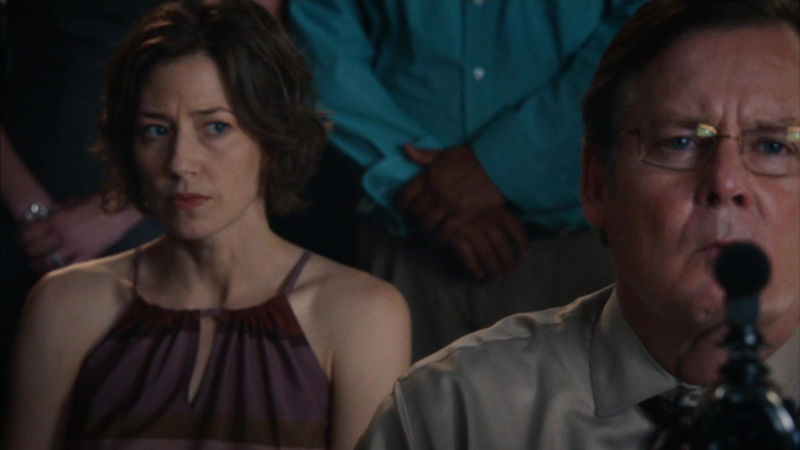 Final Song: “I Am a Rock” by Simon & Garfunkel.