The penultimate episode is usually where Game of Thrones would flex its ‘action movie’ muscles, by throwing a good portion of the budget at something spectacular happening. This is very much the case in “Beyond the Wall”, but as part of a truncated season able to splash the cash in earlier episodes, it somehow felt a little less special.

It also doesn’t help that Game of Thrones has become more conventional since season 5, because subverting expectations this late in the story is very difficult. You risk frustrating viewers if you continue doing the kind of wild things Game of Thrones was once renowned for in season 1-3, like killing major characters, so there’s never any doubt that Jon Snow is going to survive whatever’s thrown at him. Sadly, you can’t have it both ways, so do you want a big shock that’s ultimately a frustrating turn of events, or something more obvious but satisfying in a traditional sense? It’s a hard call for the writers to make.

However, despite those issues (and we’ll see if author George R.R Martin avoids them in his remaining two novels), “Beyond the Wall” was still a memorable 70-minutes. It was a dread-laden sequence of set-pieces, but one unfortunately tethered to a story full of illogical plotting and questionable decision making… 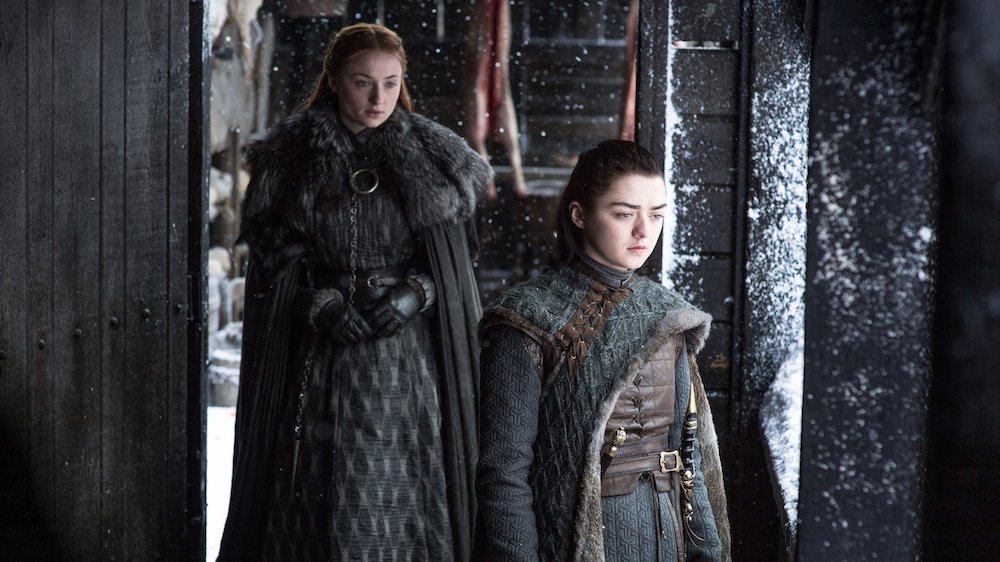 Despite the title, we also spent time south of the Wall this week. The situation between the Stark sisters intensified, as Arya (Maisie Williams) revealed to Sansa (Sophie Turner) her knowledge of the scroll she sent to Winterfell asking her family to swear fealty to her then-husband Joffrey after he executed their father. It was a little unclear what was happening in this subplot last week, if you’re a casual viewer not inclined to do online research and refresher bingeing, so I appreciated how everything was made clear.

It does seems unusually harsh of Arya to be so angry about her sister writing that missive, under psychological pressure if not physical duress, but I was happy Sansa didn’t sit back and accept her little sister’s condemnation. She’s understandably rattled and anxious Arya will tell the Norther Lords everything, which would likely end her status as ‘Lady of Winterfell’, considering she’s also the widow of two Stark enemies. But still, it seems like manufactured drama in many ways, to give those actresses something to do this season, which isn’t great.

Sansa also discovered Arya’s surgically-removed faces while searching her room, and while she didn’t fully understand her sister’s explanation about training to become a ‘Faceless Man’ in Braavos, it served to highlight how different these two have become over the years. I still don’t understand how those faces work, mind you, as they also transform your height and body shape. Magic, huh? Sansa also seems blissfully unaware that Littlefinger (Aidan Gillen) is pulling the strings, trying to put a wedge between the Stark women, so it seems increasingly likely he’s more of a blindspot to Sansa than she cares to admit.

I also wonder if Littlefinger’s going to end up getting what he wants from them falling out, considering Bran theoretically knows, or could easily discover, the truth of what’s been happening. Or maybe he just cares less and less the more emotionally detached he becomes as the Three-Eyed Raven? 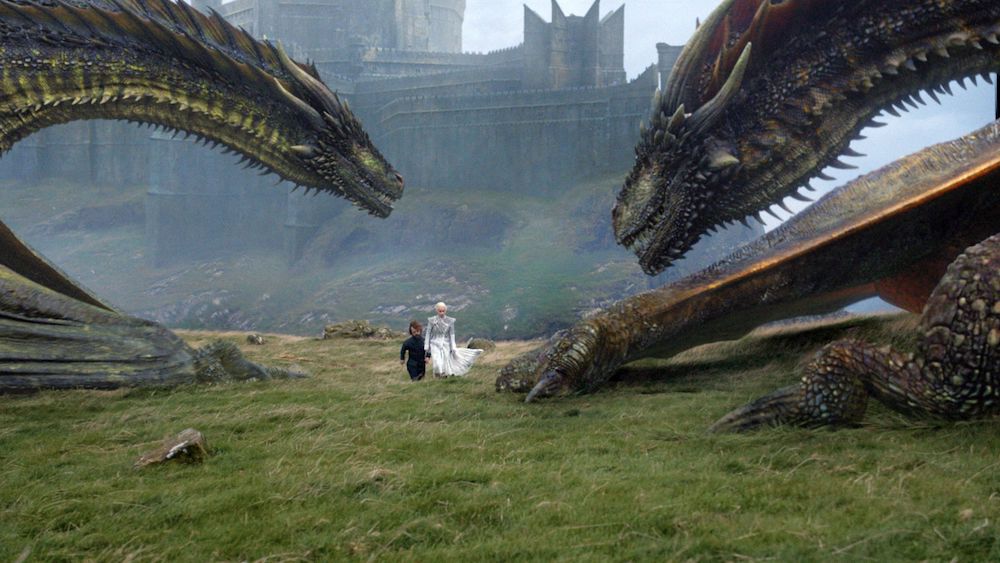 I enjoyed the frank exchange of words between Tyrion (Peter Dinklage) and Daenerys (Emilia Clarke) this week, as it helped us understand exactly where Tyrion’s coming from. I was beginning to think he was having second thoughts about siding with Dany now she’s in Westeros and barbecuing his family’s army and executing people with dragon fire, but he opened up about his apprehensions and renewed desire to see her on the Iron Throne… but only if she represents true change, and plays the long game.

It was our first reminder in a long time that Daenerys is apparently unable to have children of her own, so pragmatic questions of her succession also came into discussion. Tyrion also understands that Dany must build a society through a style of rule that represents real change and progression from what the people are used to (which is generally a fear of stepping out of line), but that it might take generations to achieve a lasting cultural move towards enlightenment. 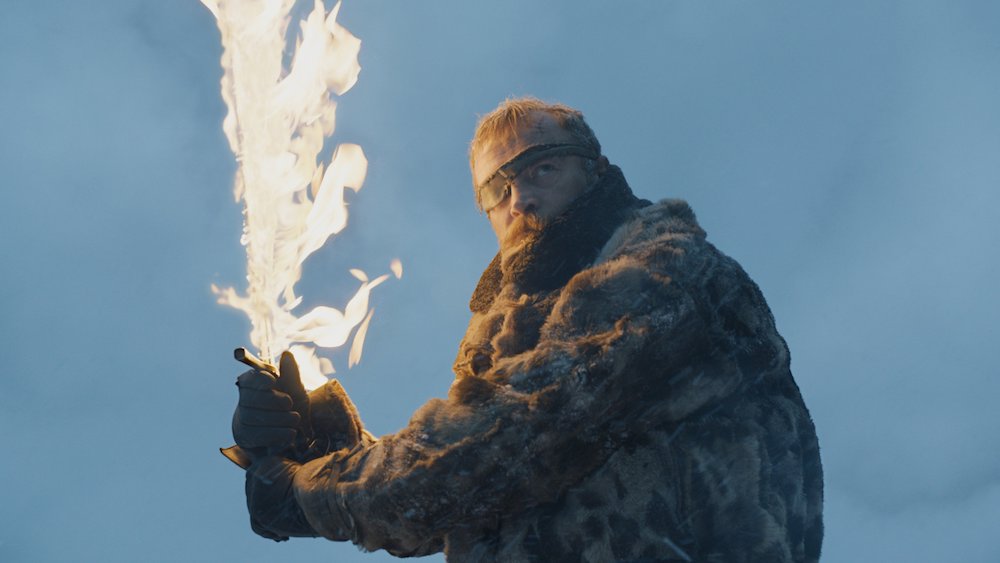 Of course, the main event of this episode all happened beyond the Wall. Jon (Kit Harington), Tormund (Kristofer Hivju), Jorah (Iain Glen), the Hound (Rory McCann), Beric Dondarrion (Richard Dormer), Thoros (Paul Kaye), Gendry Baratheon (Joe Dempsie), and the Game of Thrones equivalent of “redshirts”, pushed deep into the chilly wilds of the far North, hoping to capture a wight as proof of the Night King’s existence to southern disbelievers like the Oldtown maesters and Cersei.

One thing I’ve missed in season 7 are scenes where characters simply talk to each other; interacting in ways that are down-to-earth, building their characters, deepening their personalities, and making us care about the various journeys they’re on. There’s been less time for that this season, with almost every episode pivoting on a major event or battle, and the plot cutting to the chase more often than not. However, because “Beyond the Wall” was a little longer than usual, I thought we got some decent moments with ‘Team Snow’.

Occasionally it was just dialogue to remind audiences of who certain people are, or why they already know each other (like Gendry giving Dondarrio and Thoros grief for selling him to a Red Priestess), but there were also welcome moments of humour that enriched the characters. I especially enjoyed seeing the Hound and Tormund together, with the latter confirming his desire to have babies with the statuesque Brienne of Tarth (Gwendoline Christie), as they immediately felt like the kind of men who’d become very good friends. Dondarrian and Jon also spoke about the commonality between them, having both been resurrected from death to serve the ‘Lord of Light’. Plus there was a touching moment when Jorah was reunited with his family’s ancestral sword, Longclaw, that was given to Jon by his late father, but which he refused to take and insisted Jon keep it.

After a frightening encounter with a zombie polar bear, which severely injured Thoros, I was surprised by how quickly events escalated once Team Snow managed to capture a wight (even killing a White Walker with relative ease, to realise wights return to corpses if their ‘resurrector’ is defeated). This gives them a definite tactical advantage that’ll undoubtedly come into play, as killing White Walkers is equivalent to slaughtering hundreds of wights, and slaying the Night King will theoretically destroy every undead thing he’s brought back to life over the centuries.

The major set-pieces of this episode was when Team Snow were forced to the centre of a frozen lake, with thousands of wights surrounding them unable to cross because a circle of broken ice had formed a makeshift moat to keep them safe. Gendry was able to run away beforehand, returning to the Wall and getting a message back to Daenerys via raven, and as viewers we patiently awaited the inevitable rescue by fire-breathing dragons. This moment didn’t disappoint, although it’s unfortunate the show is having problems surprising us as the story begins to reach a conclusion that feels more prescribed than anything about Game of Thrones once did. You also rarely fear for the lives of main characters, as it would be storytelling suicide to kill Jon Snow this late in the game, so the only major casualty of “Beyond the Wall” was Thoros. Well, unless you include the dragon Viserion… 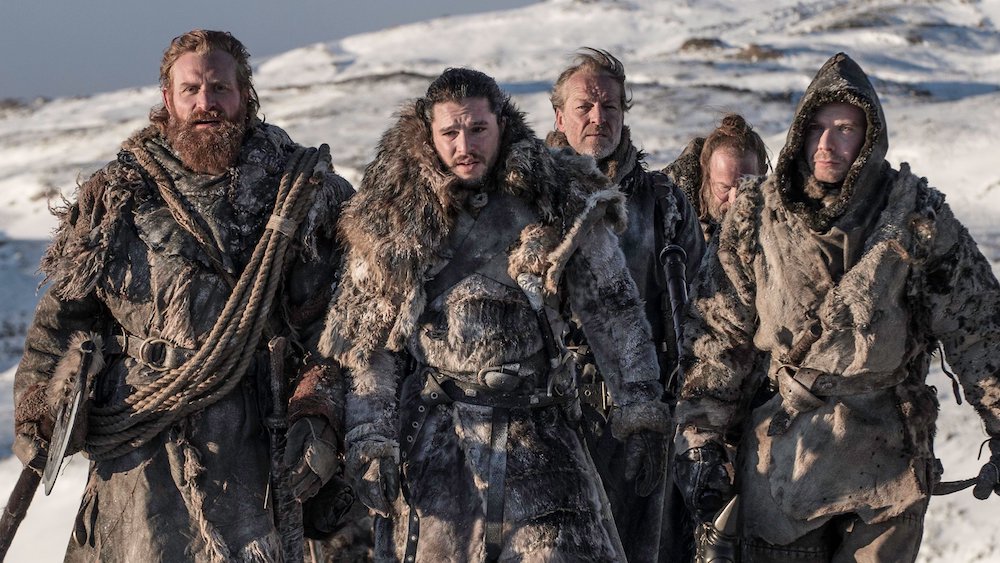 It was somewhat inevitable a dragon would meet its demise this season, and after the loot train sequence failed to accomplish that, I was poised for Dany to lose one of her beloved ‘children’ during this hour. How it happened was still very tense and heartbreaking, as the Night King threw an ice spear into one of the dragons, as all three arrived to decimate the army of the dead and rescue Team Snow. I wanted a bigger reaction from Emilia Clarke, truth be told, but it was nevertheless a terrible moment when Viserion came crashing down onto the frozen, raining blood from his wound, and then slipping beneath the icy waters. If you thought having three enormous dragons would tip the scales in out heroes’ favour against the White Walker’s horde, think again. The Night’s King only narrowly missed landing another spear into Drogon as they took off, forced to leave Jon behind.

One definite surprised was seeing Uncle “Coldhands” Benjen (Joseph Mawle) return, to fight off wights and rescue Jon, putting him on his horse and sending him back to the Wall. It just felt strange this was his only purpose, as it appears he’s sacrificed himself in the process of getting his nephew to safety. Still, the episode’s events have resulted in some positives: once Jon made it back to the Wall and put on a ship bound for Dragonstone, Dany is now 100% behind defeating the Night King after witnessing the unimaginable for herself; Jon finally pledges to “bend the knee” in light of Dany’s bravery and sacrifice, but also after remembering what happened to Mance Rayder when his pride wouldn’t let him do the same; and it seems more likely Jon and Dany are going to become lovers. It makes me wonder if the fact Dany and Jon are actually aunt and nephew will ever be known to them, as it would immediately make everything very icky. Maybe that’s a reveal for season 8, once things get more serious between them and they realise they’re the new Cersei and Jaime in that regard?

And finally, it was a spine-tingling moment to see Viserion being pulled from his watery grave by hundreds of wights using large chains (how did they manage to attach those?), only to then be resurrected by the Night King. It’s just a shame HBO blew that huge reveal themselves, almost a year ago, by releasing a one-sheet poster with the Night King sat atop an ‘ice dragon’. And can I stake a claim to this dragon now being known as Icerion?

Overall, “Beyond the Wall” was a very enjoyable epic from director Alan Taylor (returning to Game of Thrones for the first time since season 2’s “Valar Morghulis” after a disappointing transition into movies with Thor: The Dark World and Terminator Genisys), but it was also a little silly and toothless in places. There were moments when characters were doing things that didn’t make much sense, or I could think of a better way to go about things. Why didn’t they keep breaking ice around their rock island while waiting for rescue, to ensure the wights could never reach them? Why didn’t they fly beyond the Wall on Daenerys’s dragons to begin with, to capture a wight with that level of protection and advantage? Why not take a caged raven to send an emergency message back to the Wall if anything goes wrong? And issues of timing again reared their head, as you got the impression they’d been walking days beyond the Wall, only for Gendry to run all the way back to Eastwatch in what felt like hours.