Immortality. It’s a bugger, isn’t it? Doctor Who, in both its classic and current incarnations, keeps returning to that age old philosophical debate about whether living forever really is the gift that keeps on giving. The Doctor (Peter Capaldi) has evolved into a Promethean figure: endlessly wounded and regenerated, representing immortality as punishment for the death of his mortal companions and friends. Even if, rather uncomfortably and regretfully, he’s learned to live with that pain.

Catherine Tregenna’s “The Woman Who Lived” asks what happens when he bequeaths the ‘gift’ of immortality to an ordinary human being. Following on the coattails of “The Girl Who Died”, the episode wastes no time in reacquainting us with Ashildr (Maisie Williams) after The Doctor left her behind in the Viking settlement. At its best, it offers a considered, introspective examination of immortality as a simultaneous blessing and curse, even if the episode feels like it’s raking over very familiar, old coals. 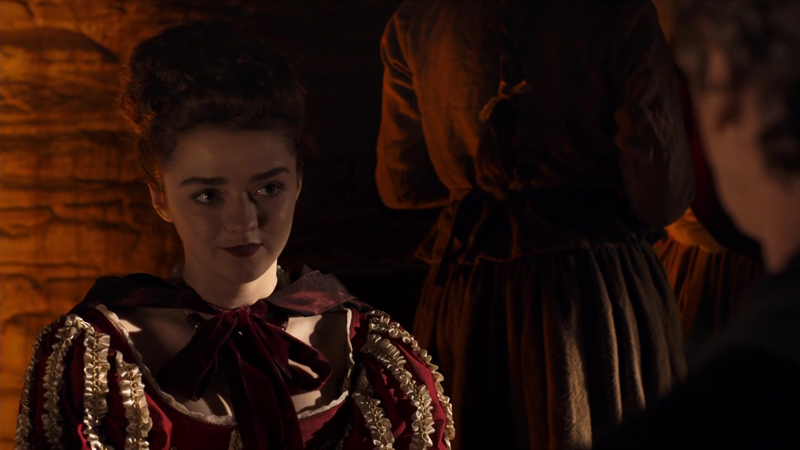 Many figures have wrestled with the same burden, including The Doctor’s fellow Time Lords (Omega, Borusa and Rassilon), and, with greater significance to “The Woman Who Lived”, Torchwood’s Captain Jack Harkness. Tregenna previously investigated the pressures of living through eternity in Torchwood, exploring disconnection with time, identity and memory in “Captain Jack Harkness”, “Out of Time” and “Adam”. Ashildr’s dilemma mirrors Jack’s as much as it does The Doctor’s.

The effect of immortality upon The Doctor and Ashildr’s subjectivity is considered in a 17th-century mansion in the aftermath of a bungled ‘stand and deliver’-style highway robbery. The setting, all beautifully rendered period detail and candlelit chiaroscuro lighting, is appropriate for an episode that riffs on the fairy tale imagery of Beauty and the Beast, holding a Jean Cocteau-esque mirror up to the lives that will continue to endure a series of deaths on their journey through eternity.

Lady Me (Ashildr’s new title commensurate with the way her life’s been whittled away over the centuries to the single personification of self-reliance) has written about her joy and tragedy for centuries, packing her drawing room with shelves of tear-stained, torn-out diaries. Like Virginia Woolf’s Orlando, historical reflection lies in the act of writing, preserving the dust and ashes of her long dead families and friends and her exploits as a “surgeon, scientist, inventor, composer.” 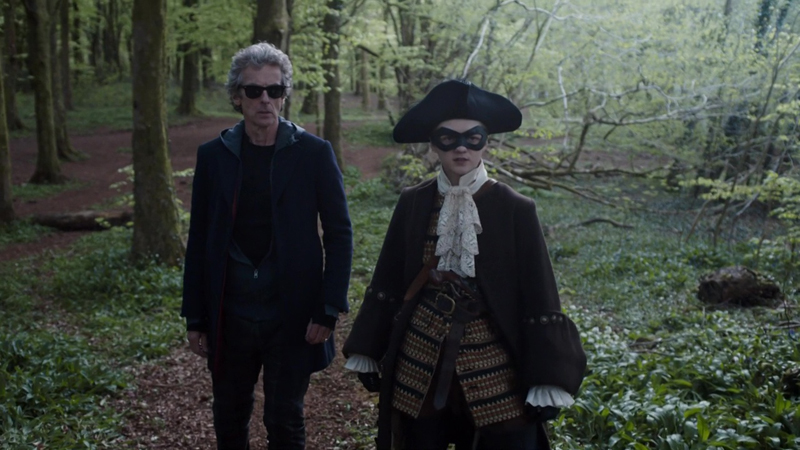 This ties in with Ashildr’s former propensity for using storytelling as a power to shape lives, and in flashback we see her ‘series of deaths’—as medieval queen, soldier at Agincourt, drowned witch, plague victim—much as we saw Jack’s immortal life retold in Torchwood’s “Fragments”. Now, as Lady Me these various incarnations have ceased to shape anyone’s life but her own and she is “no one’s mother, daughter, wife” and is “my own companion. Singular. Unattached. Alone.”

There’s a scene that could’ve been lifted from Sally Potter’s film of Orlando when, in Williams’ voiceover, we hear Lady Me’s diary entries as The Doctor reads about her abandoning aged loved ones while she strides through the empty corridors of her mansion. The drama’s play with objective and subjective immortality takes this further by then having the Doctor read aloud Lady Me’s particularly tragic description of watching her own children die of the plague. “And yet still I am not brave enough to die, to let go of this wretched life. I will endure,” sums up the Doctor’s received, objective god-like view of immortality and Lady Me’s all too real, human, subjective experience of it.

The Doctor hasn’t considered the effect of “outliving the people you’ve loved” on a human being, of Lady Me forced to live the slow path while he spans all of Time and Space. He has experienced this pain for himself but he’s reconciled it as a Time Lord’s view of the universe. However, for Lady Me “it all just runs out” and “I’m just what’s left”. She’s bored and can only perceive the world through the limitations of human memory. She has forgotten who she is, wants release from her life on Earth where people disappear like smoke, and is hungry for fresh experiences at The Doctor’s side. But The Doctor does not want to stare back at a reflection of what he once was. 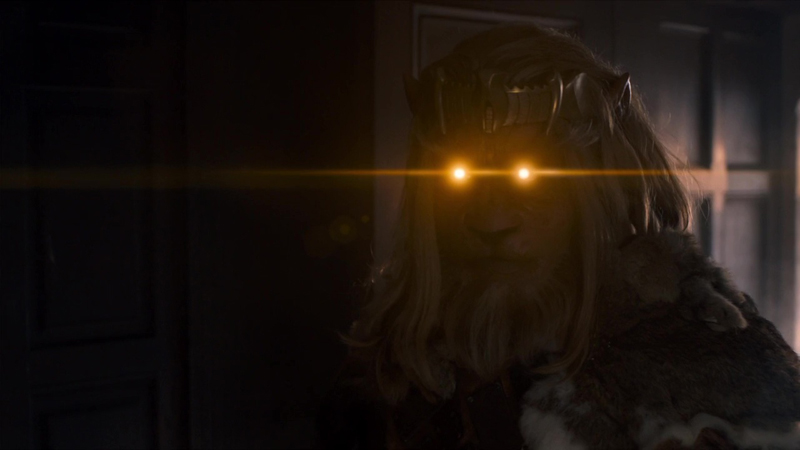 The attempt to stand and deliver and rob Lucie Fanshawe (Elisabeth Hopper) of an amulet called the Eyes of Hades generates the sub-plot of the episode. The amulet perhaps symbolises the Greek legend of Castor and Pollux. The human Castor’s spirit went to Hades. Pollux, who was a god, was so devastated at being separated from his brother that he offered to share his immortality with Castor or to give it up so that he could join his brother in Hades. Cue the resolution to Lady Me’s dilemma in the final act.

Lady Me plots to use the amulet to open up a portal and flee the Earth with her “Lenny the Lion” companion Leandro (Ariyon Bakare), the Beast to her Beauty if we’re still using the fairy tale analogy. Clearly, experience has taught her absolutely nothing about jewels of dubious nomenclature and shady, fire-breathing, lion-faced sidekicks. This seems oddly misplaced trust for one who has experienced and endured so much.

The Doctor owns up to the consequences of his actions and is left with the unenviable task of reversing the death of her subjectivity, her de-sensitivity to the world and advises her, “humans need shared experiences. It isn’t right for you to be on your own.” For a man who usually runs away from the aftermath its quite a challenge to get Lady Me to reconnect with her experiences as Ashildr but Tregenna’s ancient Greek amulet bearing gifts is predictably the key to this. 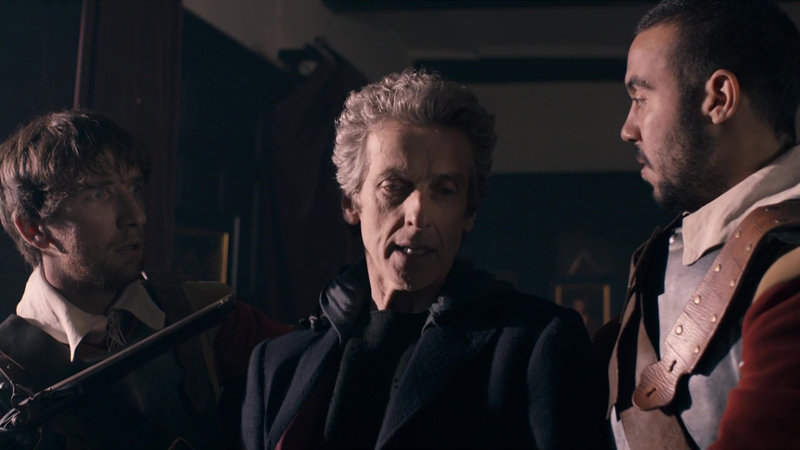 Along with the amulet as this week’s MacGuffin, we’re ‘treated’ to some weak physical comedy, when The Doctor and Me do a spot of housebreaking and run into fellow highwayman Sam Swift the Quick (Rufus Hound playing, er, Rufus Hound), followed by a series of terrible puns, fart and knob jokes when Sam’s about to face the hangman’s noose. Just as the comedy elements scuppered “The Girl Who Died”, this seismic shift in tone from elegiac examination of human existence to feeble, sub-Blackadder drollery undoes Tregenna’s otherwise exceptional work. What could have been a truly fine episode ends up being average.

The mechanics of the plot are a little too exposed for Lady Me’s sad story to really tug at your heartstrings. After the amulet is activated by attaching it to Sam Swift (“the guilty man destined to die” in this instance), the convenient conclusion suddenly reveals not a portal to freedom but the hell of Leandro’s invasion fleet, blasting all and sundry to smithereens. 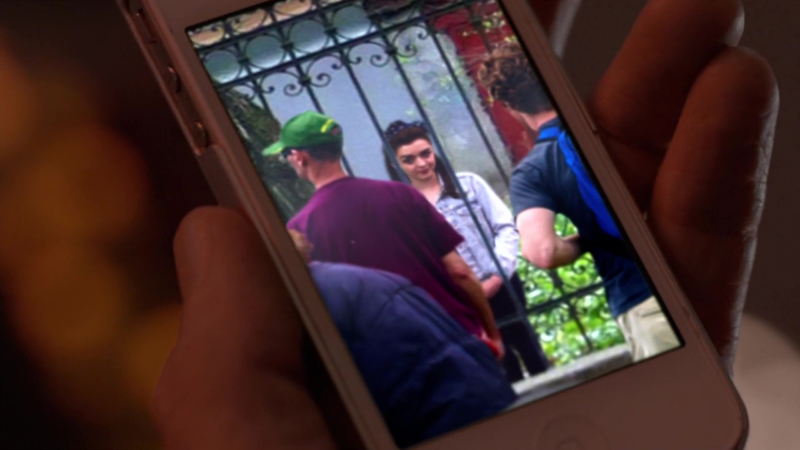 Does Lady Me turn her cheek to this suffering or reclaim the compassion she’s buried for centuries to save the day? She may have railed against the boring mayfly lifespan of the humans she’s desperate to escape from but, rather abruptly, she’s all heart. From The Doctor’s perspective this is all in a day’s work, when “you think you don’t care and then you fall off the wagon.” Rather like Pollux in the Greek myth she decides to rescue Sam, using her spare immortality patch to save him and close the portal.

Finally, Lady Me’s remonstration with The Doctor about Clara’s (Jenna Coleman) finite lifespan during their housebreaking adventure does come back into focus in the coda of the episode. The Doctor suggests to her that as immortals they need the mayfly existence of humans to remind them that life is precious. Lady Me’s weariness and emptiness is a little too close to home for the Doctor and it hangs like a shadow on him when Clara appears at the end of the episode. A school pupil’s selfie reveals Lady Me’s promise to look after those left behind by The Doctor, as a back-up to his duty of care. Soon that daft old man will deal with the fate of Clara Oswald and, rest assured, Lady Me will be there.