Perhaps it was inevitable that Missy (Michelle Gomez) and Clara (Jenna Coleman) would escape the ‘maximum extermination cliffhanger’ by using those vortex manipulators so kindly pointed out with alacrity last week. What I wasn’t expecting was a monochrome flashback where Missy showed how clever The Doctor (Peter Capaldi) is at getting out of impossible situations. With shades of “The Name of The Doctor”, someone passed by dolled up as Tom Baker and, with less haste, William Hartnell. In case you’d all forgotten what a cliffhanger is, Missy provided a handy explanation.

Doctor Who has always relied on the ‘get out of that!’ cliffhanger; a narrative device that stretches back to Homer, One Thousand and One Nights, Wilkie Collins, and The Perils of Pauline. Still, it gives Murray Gold another opportunity to trot out his Bond jazz pastiche as Peter Capaldi somersaults down a flight of stairs. The conclusion to this indulgent preamble is that Missy and Clara must assume they’re going to win when they set off to rescue The Doctor from the heart of the Dalek city, armed only with a pointy stick. 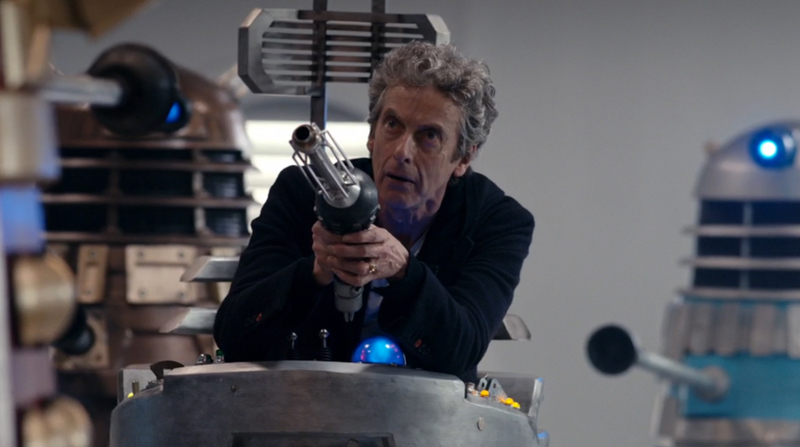 Back to the actual story then, and why Davros (Julian Bleach) insists on meeting The Doctor one last time, engineering a reunion close to his demise after “standing at the gates of my beginning” with the young Davros (Joey Price) on the battlefield. The manner of The Doctor’s escape is rather shocking, hoisting the crippled Davros out of his survival chair, knowing full well the Kaled scientist has since learned some valuable lessons about his creations and fitted it with a personal force field. The Doctor sitting in Davros’s chair surrounded by angry Daleks, nonchalantly sipping a cup of tea, is a prime example of assuming you’re going to win, quite literally with knobs on.

Missy’s idea of team working with Clara is predicated on “every miner needs a canary” and splitting them up from The Doctor during both parts of this storyline provides us with a witty subversion of the roles of The Doctor and his companion. Gomez and Coleman play their characters’ mutual mistrust very well, and it explores rich territory when Missy ‘persuades’ Clara to climb inside a Dalek after luring it into the sewers beneath the Dalek city to be set upon by its decomposing fellow creatures. 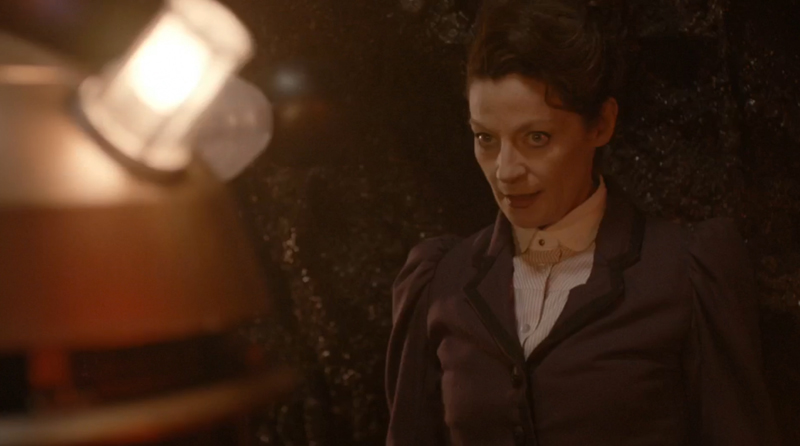 The Dalek sewer is an odd but fascinating idea; a waste tip-cum-graveyard for geriatric, undying, decomposing old Dalek mutants. It’s a Gothic concept that suggests an unpleasant, effluvial underbelly exists beneath the sanitised steel corridors of the city above, and it perhaps matches the notion of the asylum concept in “Asylum of the Daleks”, as a symbol of maintaining racial purity and the side effects of the internalisation of evil.

Occupying the seat of power is an interesting motif throughout. Clara’s inhabiting of the Dalek (a recognisable, powerful desire for children who enjoy ‘playing’ at Daleks) takes us way back to the first Dalek story with the similarly grisly undertaking required of Ian Chesterton. Yet in this instance Moffat is also directing us to Coleman’s first appearance as Oswin Oswald, who became a fully conditioned Dalek in “Asylum of the Daleks”. 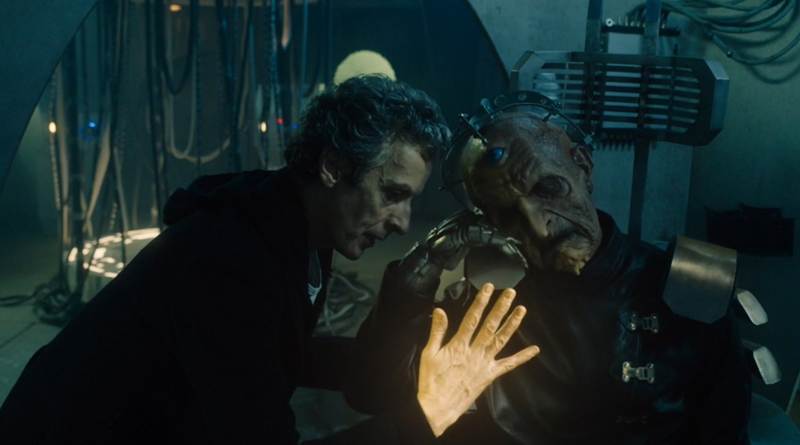 There’s a certain unease seeing Clara mirroring one of her ‘impossible selves’, plugging herself into the Dalek neural net and, out of sheer fear, barking orders to exterminate. It’s a very interesting view of Dalek subjectivity as the infantile illusion of omnipotence, of how regressive infantile rage emerges from chronic stress and fear. Even an expression of love or a statement about difference is mangled through Dalek tech as an angry proposition for hate and immediate extermination.

It’s also reflected in The Doctor’s demand of the Supreme Dalek to know whether Clara’s still alive, and then teetering on the brink of acting out his own rage, of becoming the good Dalek he was singled out as during “Into the Dalek”. That oncoming storm is acknowledged by Missy (“he’ll burn everything. Us too”) and Davros (“this urge for conquest… it is gratifying to see you learn”) and underlining it is The Doctor, sat in the only other chair on Skaro, and waking from a brief dream of young Davros crying for help, demanding to survive. 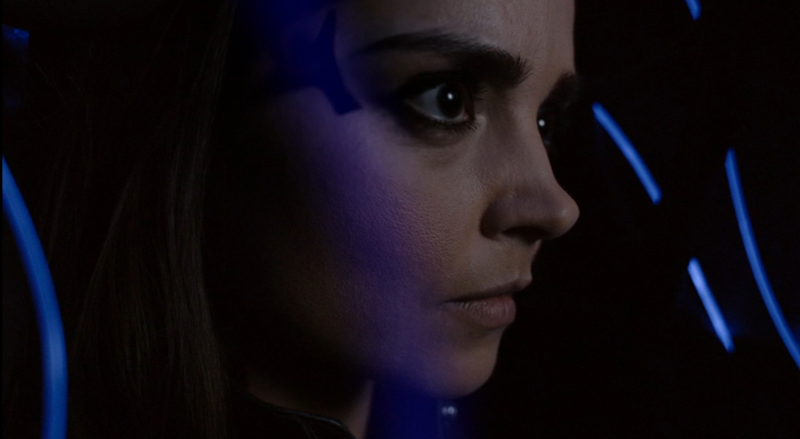 The power on the throne is mutable, and the episode returns to it again in the twisted ending where The Doctor’s confronted by the Dalek controlled by Clara and Missy attempts to persuade him to shoot it. “The friend is inside the enemy and the enemy is inside the friend” captures the sense of how all the characters have exploited each other throughout; trading on compassion, guilt and mercy as a means to an end and where, if Davros gets his way, “everyone’s a hybrid.” While Missy’s view is as extreme as Davros’s, the demarcation between friends and enemies is dissolved when The Doctor returns to the battlefield on Skaro and instills in the young Davros that there must always be mercy.

However, before that resolution, a trap for the Time Lord is waiting and Davros reels The Doctor in, pricking his conscience with a moving request to see the last sunrise with his own eyes and to be unburdened of the children keeping him alive with their life force. Harking back again to “Genesis of the Daleks”, Davros inverts the “to hold in your hand” speech and implores The Doctor to use his own abilities to wipe out the Daleks. 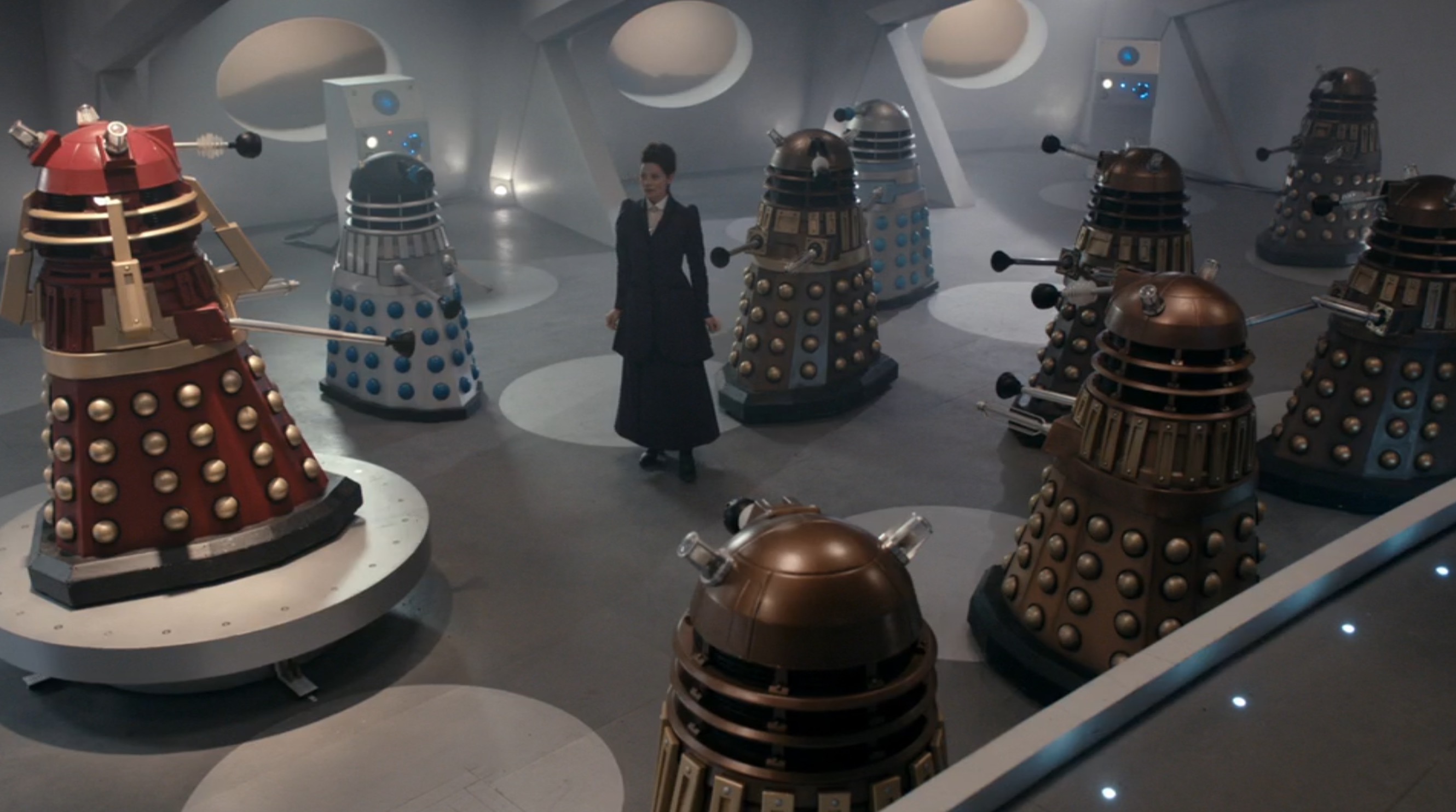 “Genocide as a choice” whispers his old enemy, touching on the same moral debate The Doctor wrestled with back in 1975, and the guilt he has carried with him ever since. However, The Doctor is only present because for him it’s a rare moment where shame and guilt give way to compassion. He briefly resigns from being some old Time Lord who ran away, and for now he’s The Doctor and there to help. And with that Davros has found the Time Lord’s Achilles heel. Compassion, always.

The scenes between Capaldi and Julian Bleach are the real reason for sticking with this episode. Both give very considered, quiet performances, and Bleach’s skill is so effective you’re pulled in, hook, line and sinker, sharing Davros’s nagging curiosity about why The Doctor left Gallifrey, feeling sympathetic for Skaro’s genius as he gradually opens his eyes to look upon the sunrise and, playing on his sense of belonging to and homesickness for Gallifrey, flattering to deceive The Doctor into parting with his regeneration energy.

Davros’s advice to “take the darkest path into the deepest hell but protect your own” could be foreshadowing something to come, not only in this episode but also for the rest of the series. Will The Doctor make the right choices when it comes to rediscovering Gallifrey? Davros even throws The Doctor’s own self-examination back at him, pleading “am I a good man?” when he asks him if he made the right choices regarding the survival of the Daleks. 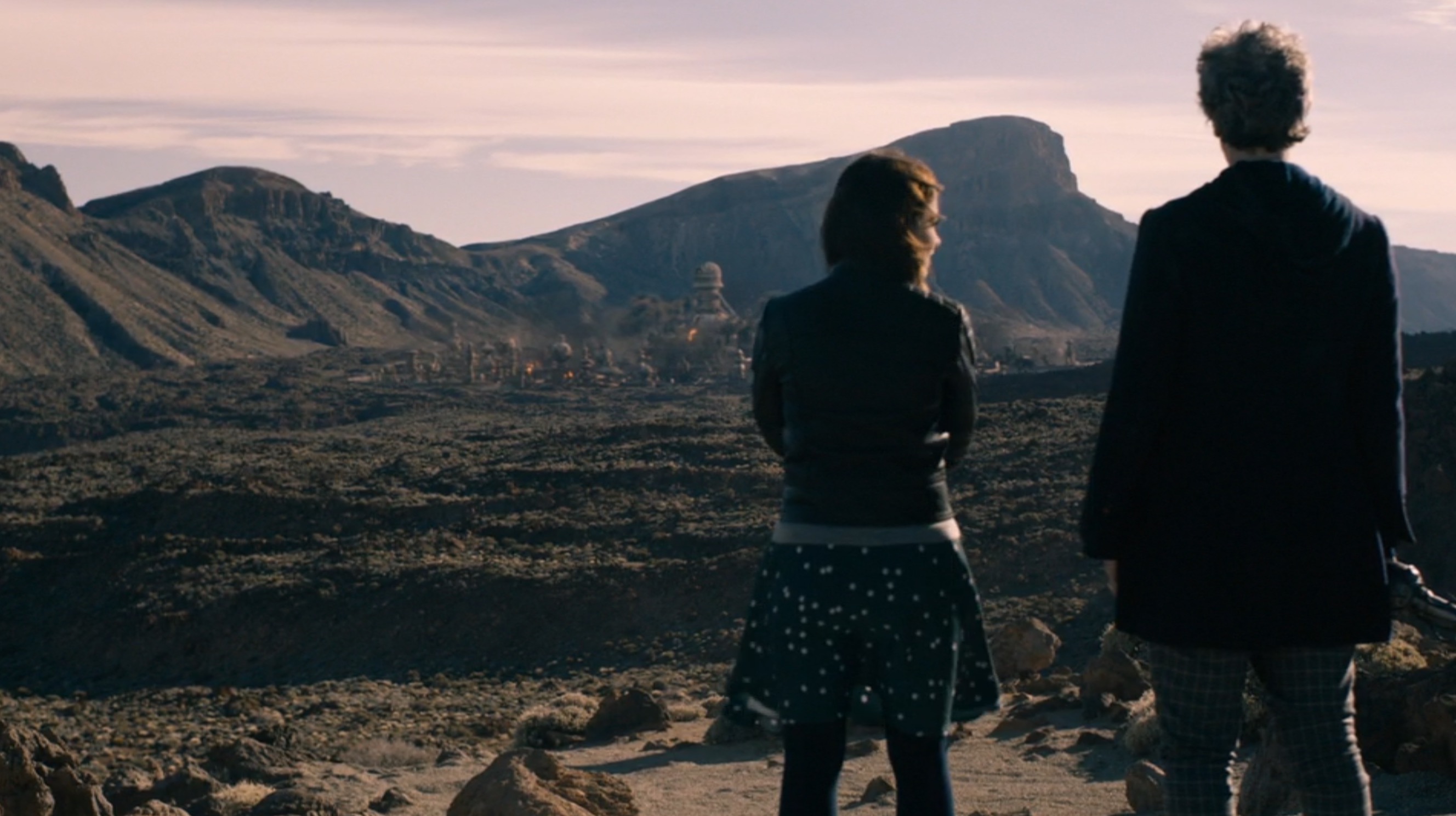 All this resonates with current debates about our own libertarian values and moral conscience in Europe, as the rhetoric of xenophobia dominates the political agenda. Mercy and compassion are not genetic defects when it comes to having a “strong concept of home”, but The Doctor’s downfall because of these qualities dovetails thematically with the notion of the Daleks as vampires, draining the Doctor to “drink the blood of Gallifrey” and fuelling Gallifreyan prophecies of hybrid creatures, that raises again the spectre of otherness, xenophobia, and racial purity in the series.

The only drawback here is that these robust themes are left unresolved for the sake of a cop-out ending where The Doctor’s regenerative energy appears to instil a senior citizens’ revolution and a terrible joke: “your sewers are revolting”. Angry Dalek children and Dalek geriatrics sucked down into what looks like their own shit is certainly a different way of thwarting their all-consuming fascism.

Moffat still can’t resist a few more knowing winks to the audience, either; intimating Missy has or had a daughter, and that the Time Lord ability to change genders requires an “upgrade”, but he also leaves major questions unanswered, as is his wont. What exactly is on The Doctor’s confession dial? And what was his real reason for leaving Gallifrey. Will we see the fate of Missy? And what happens to the Daleks and Davros since they’ve had a regeneration energy upgrade? But that’s another story, we must presume. Sadly, it may involve the use of sonic sunglasses now The Doctor’s given up his sonic screwdriver. There’s always a downside.